Yesterday we moved from the Spanish Wells Mooring Field about an hour away to Royal Island where we anchored for the night to make today’s trip a little shorter. This morning we left that anchorage and a little under eight hours later arrived at Chub Cay in a string of islands called The Berries.   We have a nice three day window of calm seas and almost no wind to get us back to Florida so we left a few days before our month at the mooring field was up to take advantage of it. The wind never got above 10 kts today but since that resulted in almost flat seas, we didn’t mind going a little slower. The wind speed for the next two days is even lower, therefore the conditions should be great as we cross the Gulf Stream and arrive in Lake Worth on Saturday.

It’s been awhile since we have been on the move, and Sailor is still a fair weather sailor. The best way to keep him from panting and worrying about the sounds and motion of the boat is to take him into a bed. As long as he can touch me he relaxes, but he won’t stay in the bed alone. So, we went to the bed in the forward cabin, as far away from the diesel engines as we can get, and while I read from my Kindle, Sailor slept.

As the day went on he became more relaxed and slept in the salon. Perhaps he was anticipating rougher weather and realized it wasn’t going to happen.  Twice he rang his “poochie bell” and Mark walked him up to the trampolines on a leash to “go.” This is only safe to do when the seas are this calm.

Once we got close to shore at Chub Cay we let him come up on the deck while we looked for a good place to drop the anchor. In Sailor’s mind, land equals beaches and I suspect he was checking them out hoping to get off the boat soon. 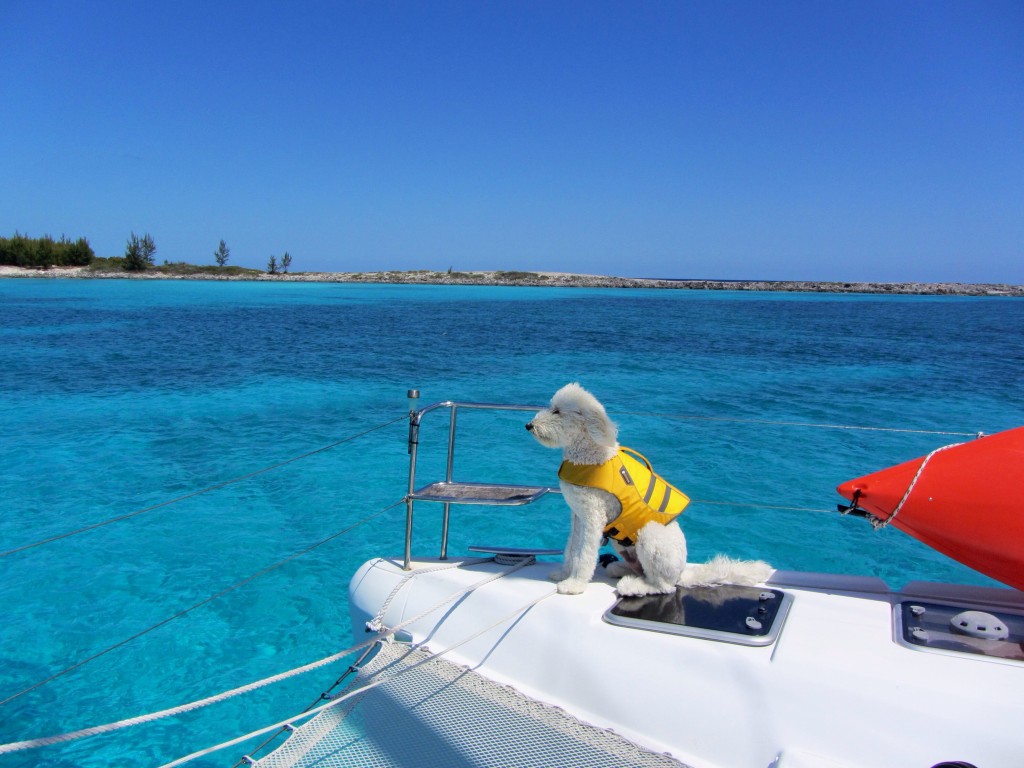 Shortly after we dropped the anchor, Mark and Sailor dinghied over to a nearby beach. While Sailor doesn’t particularly like the motion of the ocean on a 42 ft sailboat, he loves riding in a 12 ft long dinghy, which is a much rougher experience. Perhaps that is because he knows at the end of most dinghy rides he gets to run up and down a beach and swim out to fetch his wubba.  Lately he has started hanging over the side of the dinghy with his face almost in the water looking at the sealife. In this clear water there is a lot to see.

Chub Cay is not our favorite place to anchor because it has a marina filled with motor vessels, most of them here for fishing, ranging from small powerboats to large million dollar plus sportfishers.  The larger boats generally slow down in the short channel leading into the marina. The smaller powerboats, however, race in and out of the harbor creating huge wakes.  The anchorage is on either side of the channel and of course they don’t think they should be slowing down to keep us from rocking. We feel like we are back in Miami or Ft. Lauderdale.  Actually, some of the boats came over from Florida for Memorial Day Weekend.  Other people leave their boats here and fly into the Chub Cay airport.  In less than an hour we saw five small passenger planes land at the airport, all appeared to be able to carry at least 12 passengers. The majority of Chub Cay is an upscale resort and marina. There are private homes by the marina, as well as a restaurant and a huge clubhouse.  Sadly, there is no shore access for those of us anchored here.  A pretty beach near us is marked “private” on a sign, although all beaches up to the high water line are public in the Bahamas, even this one on the marina property. Sailor goes to a beach on tiny deserted Crab Cay adjacent to Chub. 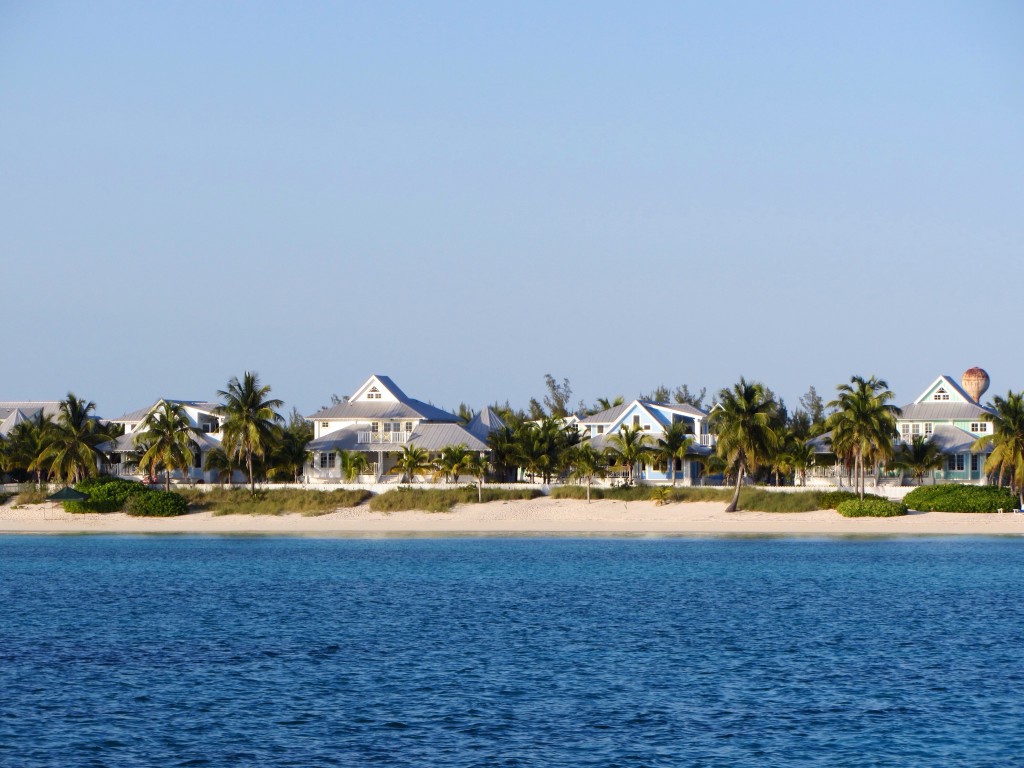 We spent the day on the ocean and it was so calm we didn’t have to put anything away to keep items from falling off shelves, yet now we are rocking back and forth and have to rearrange breakables. Notice the difference in wake from the small powerboat speeding by and the large sportfisher slowing down in the channel. Believe me, we feel the difference. 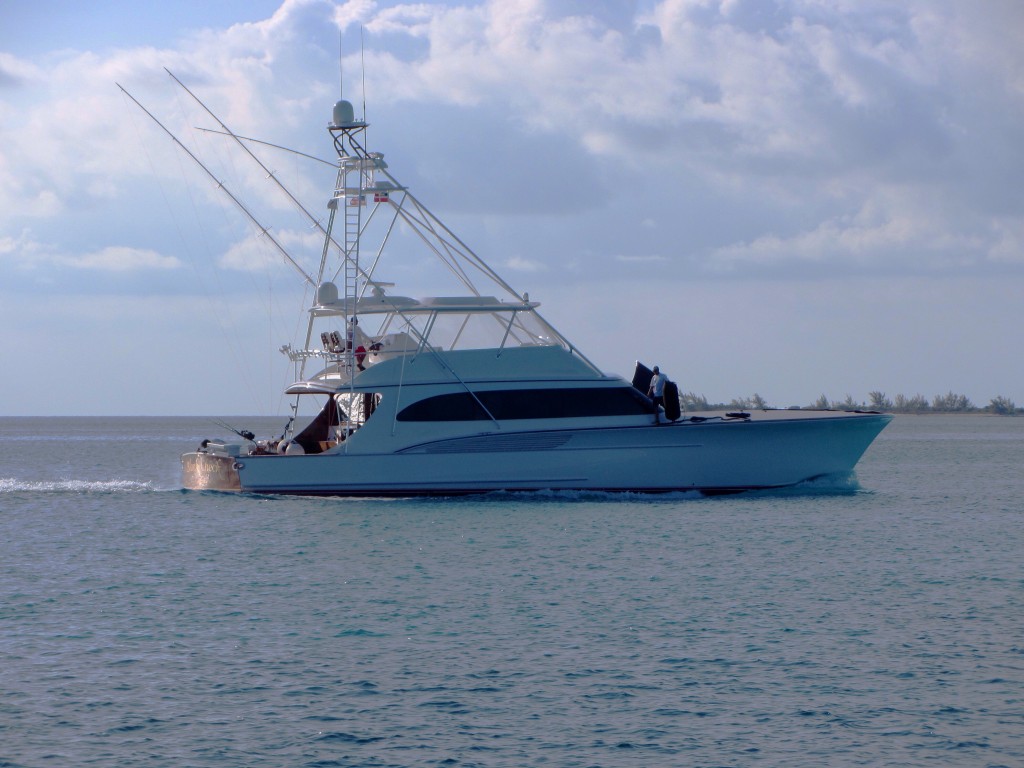 Tomorrow we’ll motorsail almost 12 hours to anchor near Bimini. The marinas there are mostly full and have raised their prices for the holiday weekend.  We heard that at Brown’s Marina in north Bimini their usual 90 cents a foot charge is $2.50 a foot for the next few days. Shortly after leaving Chub Cay, we’ll leave the deep water of the ocean and be on the shallow “bank.”  Many people anchor overnight on “the bank” in calm wind and sea conditions, away from the route of the boats going between here and Bimini.  We’ve never done that, but I’m beginning to think it would be much more relaxing than Chub Cay.  Then again, Sailor wouldn’t get his beach time and that’s important too.

Here is the view from the boat as the sun was setting over the ocean in Chub Cay. We only have one more Bahamian sunset to watch after tonight. 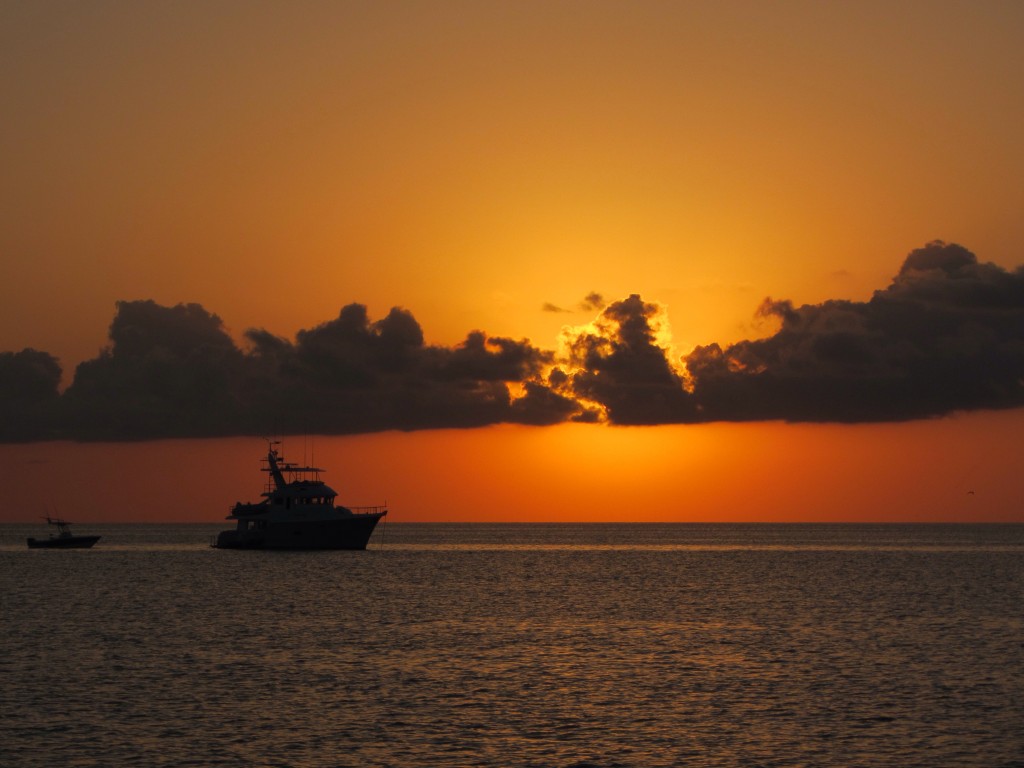