After weeks of preparations, and a summer and fall of repairs and new purchases for the boat, this past week we had a weather window to get to Miami. Our wonderful dockmates helped us release the lines on Wednesday, November 9, and we were on our way…….until we reached the 65 ft Roosevelt Bridge next to our marina. The tide had been higher than normal, so we waited until mid tide and still barely made it under the bridge. Our mast is 63 ft (cut down from 68 ft so we could go under the ICW bridges) and the clearance sign said 64 ft, however we have instruments on top of the mast so we knew it would be close. For the first time our antenna dragged across the underside of a 65 ft bridge. 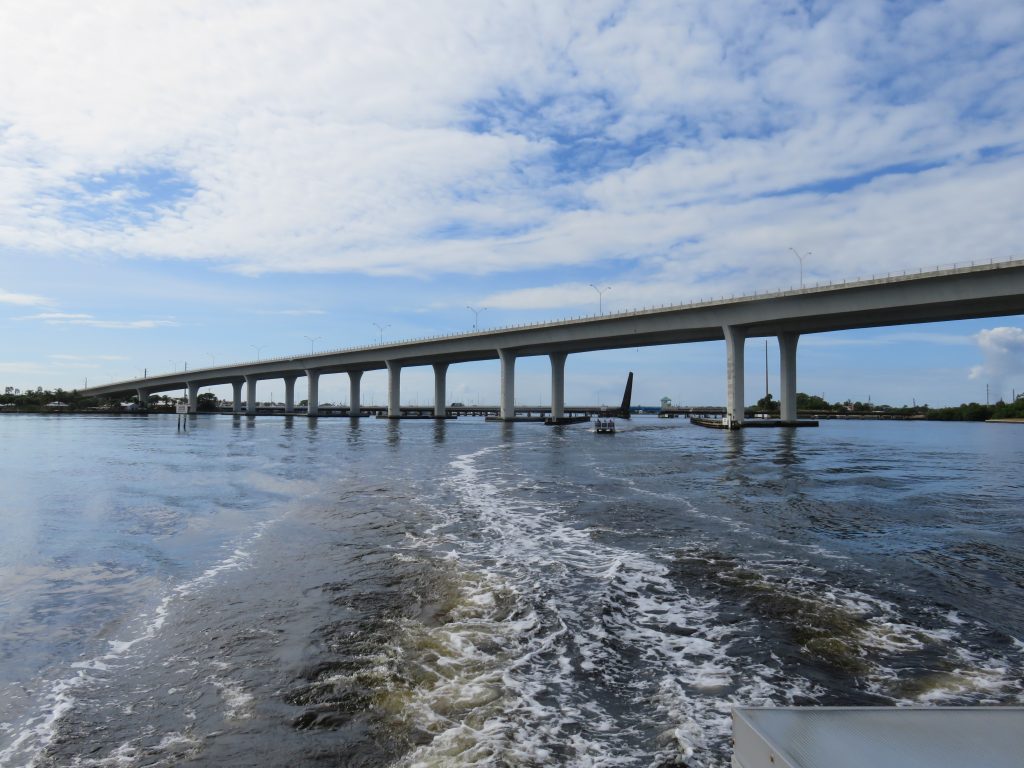 After that we had an uneventful motor to Lake Worth. We rarely had to slow down for bridge openings. Some are on the hour and half hour and others are on demand, but we seemed to time it perfectly. We anchored near the Lake Worth Inlet and took Sailor for his first dinghy ride of the season over to Peanut Island. 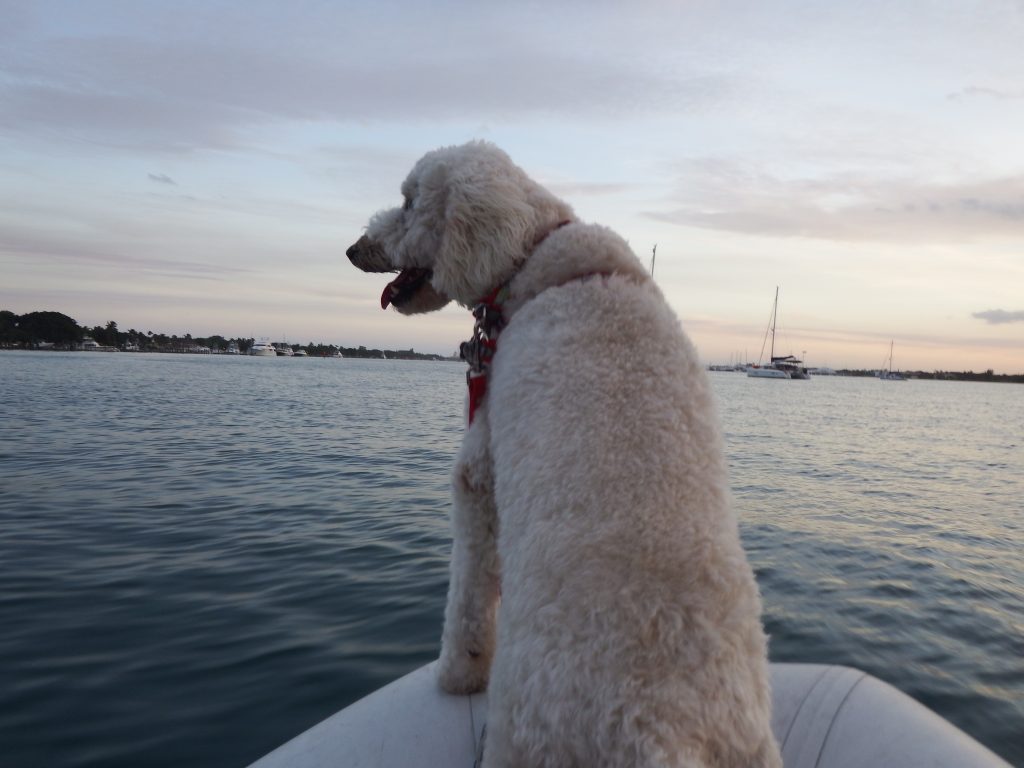 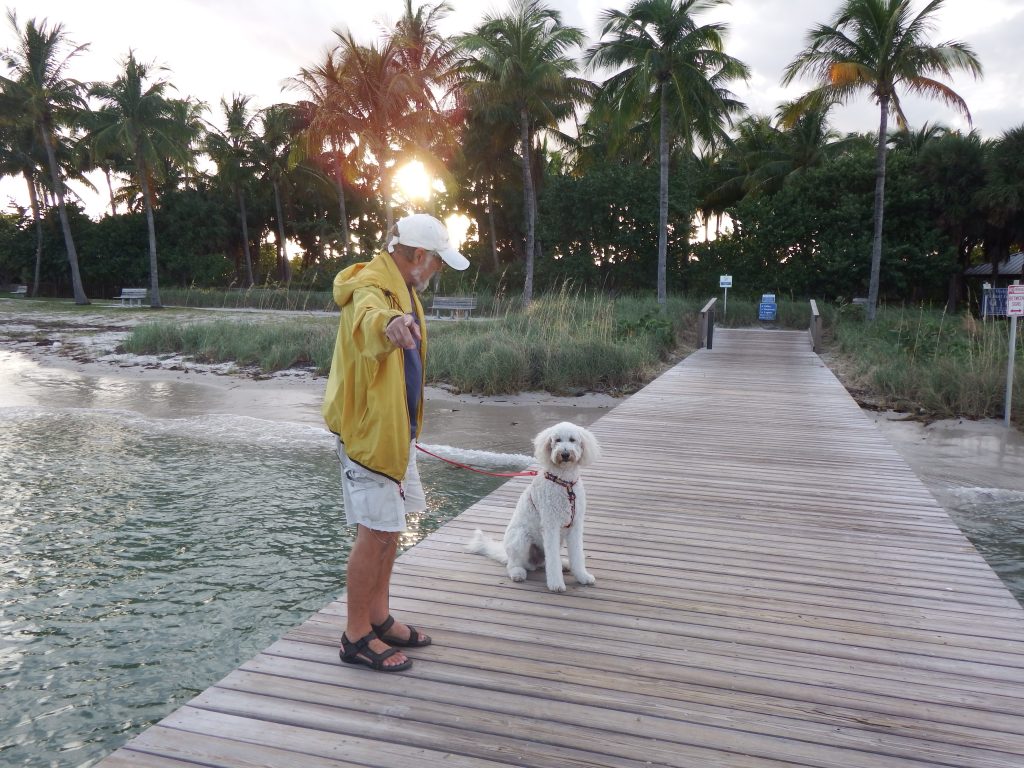 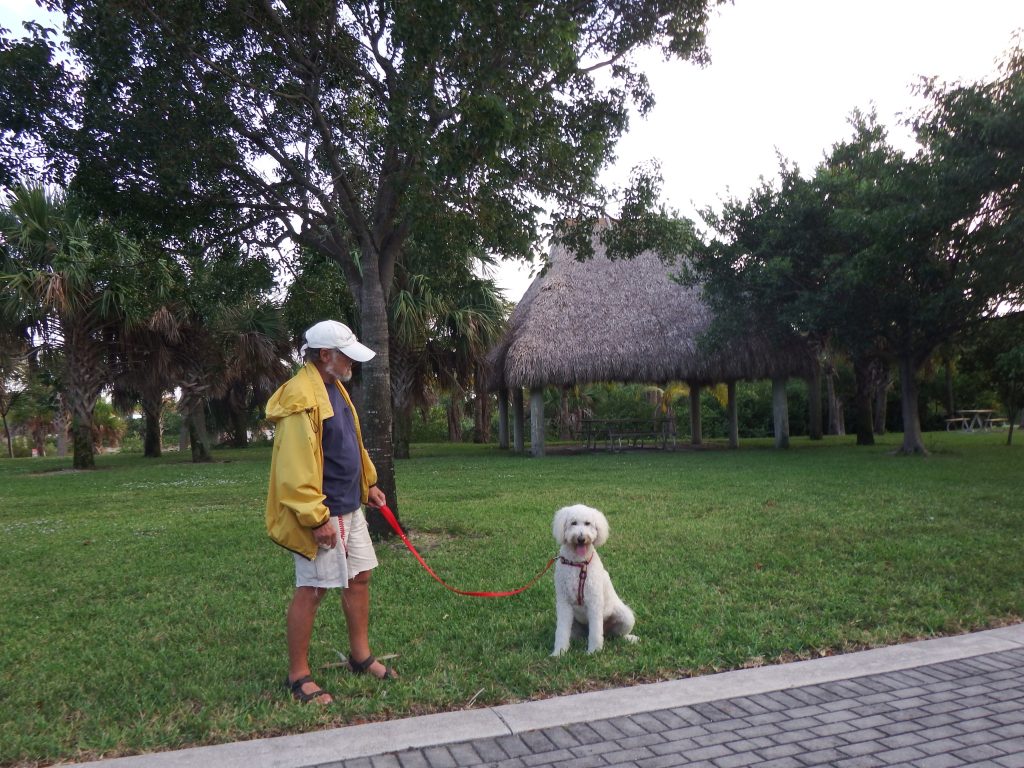 The next morning we left the Lake Worth Inlet and turned south towards Ft. Lauderdale. The seas were calmer than predicted, in fact there weren’t even white caps. We made good time and went under the 2:00 opening of the 17th St Causeway Bridge. This was the roughest part of the cruise so far with a number of powerboats racing by us in the inlet. We have stayed at the New River City Marina many times and they know us so the dockmaster gave us a slip before the first bridge. There are numerous bridges on the New River and they are closed between 7:30 am and 9 am on weekdays, therefore we would need to leave before 7:30 or after 9 am to get under the bridges and to the inlet. We had two surprises on our way out to the ocean. First, turning towards the bridge from the New River, we suddenly ran over something and heard it banging under our port hull. Assuming is was a log or some other debris, Mark backed up but we couldn’t seem to lose it. Then a fire boat came by and they told us we had run over a buoy. Oops!! It was small, close to the water level and Mark didn’t notice it. I was inside at the time. Backing up further, the buoy popped up and we continued on to the bridge. At the 9:00 opening of the 17th St Causeway Bridge, we went under and turned into the Port Everglades Inlet. Oops again. A cruise ship was returning to her slip by the bridge and was taking up most of the channel. We had to turn around and pull over so she could get by us. Then we entered the inlet and for once no powerboats raced by to wake us. We turned south towards Miami and had a pleasant smooth motorsail again. 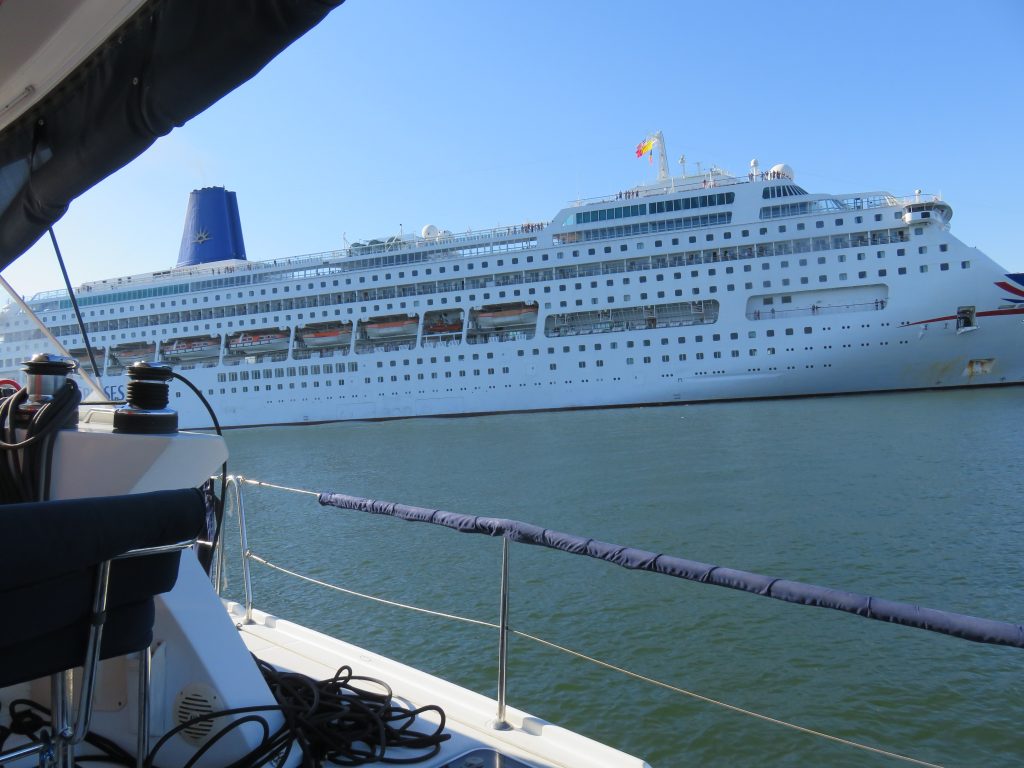 Coming into the Miami Inlet is much easier than Port Everglades in Ft. Lauderdale. That is probably because Miami is a busy commercial harbor and numerous cruise ships are close by. We rarely see any boats speeding into the harbor. Our first stop after going under the Rickenbacker Causeway into Biscayne Bay was at Crandon Park Marina to get fuel. The older gentleman who has always been there in past years wasn’t working and the young man taking his place didn’t seem too enthusiastic. We had to call the marina to get him to come outside and catch our lines. While Mark was filling four jerry jugs with diesel after filling both tanks, the young man told us he was going back inside to eat his lunch and we could call when we were finished. When I went to the office to pay the bill, I handed him a tip and suddenly he seemed more interested in helping us with the lines as we left.

As we approached the Dinner Key Mooring Field in Biscayne Bay, we called and got a ball assignment. They said to grab ball 170 and gave us directions to where it was. We went up and down the rows and there was no ball 170, so  we called the office and the worker again gave us directions. After looking for 15 minutes we called again and this time someone from the mooring field was there and told us that ball had been “deactivated” and assigned us another one.

We have spent three days here, walking around Coconut Grove and visiting the dog park, which is very nice. There is astroturf and recycled tires are used for the paths. Sailor has gotten a lot of exercise each day and should be ready now for beach runs.

Today my son Peter arrived and he’ll be joining us as we make our way through the Bahamas to Georgetown.

I enjoyed my last frappuccino at Starbucks until we return to Florida at the end of May. Well maybe I’ll have one in Nassau. We made final visits to the local grocery stores, Milam’s Market and Fresh Market, mostly for fresh fruits and vegetables plus a few items we forgot to purchase during our provisioning shopping trips in Stuart.

The forecast for the crossing on Monday is 1-3 ft seas and light and variable wind. If that turns out to be correct, we will have a pleasant motorsail to Bimini. There has been almost a week of mild weather but of course it can’t continue. A front will be passing through Florida and the Bahamas In a few days.  We will not be able to make it all the way to the Exumas without an extended stay somewhere. If we have two more good days we’ll get to Nassau. Otherwise we’ll stay in Bimini rather than going on to Chub Cay or Frazier’s Hog Cay in the Berries where there is nothing to do on shore. In fact, Chub Cay is a private island and we can’t even take Sailor to the beaches.

To further complicate our cruise to the Bahamas, we have been getting email updates on a Tropical LO forming in the Caribbean. This could possibly develop into a hurricane over the next few weeks. Hurricane season isn’t finished until the end of November, but since they are rare in November, our insurance policy allows us to leave our marina in Stuart after November 1. We will watch this system closely and make sure we are in a safe place if it becomes a hurricane in the Bahamas.