We had a pleasant sail from Nassau to Shroud Cay, staying there one night and then sailing to Staniel Cay arriving Tuesday afternoon.  We immediately found a spot in a protected anchorage by Fowl Cay since a front was on its way to the Central Bahamas.  There are quite a few boats here, most probably heading north.  We, however, want to go south and can’t leave until the wind calms down.

There are lots of advantages to being in Staniel Cay, although it is not our favorite place to stay. For a cruiser, there are plenty of anchorages to move around to when the wind shifts, however there are also always other boats with the same intentions.  There are three stores, all quite small.  Two are just rooms in private homes, called the Blue Store and the Pink Store, and yes the houses are painted those colors. Isles General is a little larger, but still only two small rooms on the first floor of a home.  A large boat brings supplies once a week, but we didn’t need anything this time. There is good snorkeling here, mainly at Thunderball Grotto, a cave where the movie Thunderball was shot.  In fact, that is Staniel Cay’s claim to fame.  Of course, there are the swimming pigs, but once you’ve seen them you rarely go back.  They live on part of Big Majors and come out to your dinghy begging for food.  There are a number of small beaches, suitable for swimming, going ashore with a dog or to socialize, but not for any distance walking as they are all small.  There is no real access to beaches or walking on the Exuma Sound side.  Overall, it’s a convenient place to stop and the people who stay here for extended times are here to socialize with friends on boats or at the Staniel Cay Yacht Club.  It’s called that, but really is just a marina with a restaurant. There is also a fuel dock which many cruisers use to replace fuel used on the way here.  We find the food there OK, but on the expensive side for the quality. For a special occasion splurge, there is a restauarnt on a separate island/resort called Fowl Cay.  It is five star and has a nightly gourmet meal with a price to match.

This is a great destination for people not on boats who want to visit the Exumas as there are a few cottages on Staniel Cay and some luxurious ones on Fowl Cay.  There is a dive boat ready to take you snorkeling or diving on nearby islands.  Also, Staniel Cay has a good airport and flights arrive daily from Nassau and Ft. Lauderdale, as well as private planes. Cruisers often have guests fly in here.

We are trying to get to Georgetown, about two days from here, to meet up with friends on Interlude, Cathie and Tom.  We will probably leave tomorrow, but as always moving around in the Bahamas is very weather dependent.  Tomorrow looks like a good day to sail south but on the second day we have to go out into the Exuma Sound, aka the ocean, and the wind will be from the southeast and seas probably higher than we are comfortable with sailing in.  However, if we don’t leave tomorrow, another front is coming through early next week and stalling in this area.  When you are in the Bahamas, you resign yourself to listening to the weather every day, either to move to another anchorage if a strong front is coming through and you need a different protection, or to move on to another island.  Right now, some people are looking for good weather to return home to the States.

Sailor has had a fun time here.  He’s had several romps on the beach with a poodle named Luke from another sailboat.  He’s also learned to swim!  Or, I should say he knows how to swim but now he seems to be comfortable with it.  He retrieves balls from water over his head, no more than 15 feet offshore and will do this as long as someone will throw the ball for him.  He races up and down beaches and gets lots of exercise.  He usually “goes” on the trampolines before his beach visits, so he’s there mainly to play.  He loves riding in the dinghy, so the whole shore trip is fun for him. Of course he gets full of sand, so he is learning to swim before getting back on the dinghy and then he gets washed down with salt water from a hose when he gets back on the boat and then has a shorter fresh water rinse.  After all this he brings little sand back onto the boat.

Sailor also found a new way to get on the boat.  One day I opened several hatches to catch the breeze and he investigated one over a guest cabin bed.  A screen was pulled across the opening, but that didn’t stop him.  He fell through it onto the bed and then promptly settled in for a nap as if that was his plan all along.  Below are a few photos from the last few days. 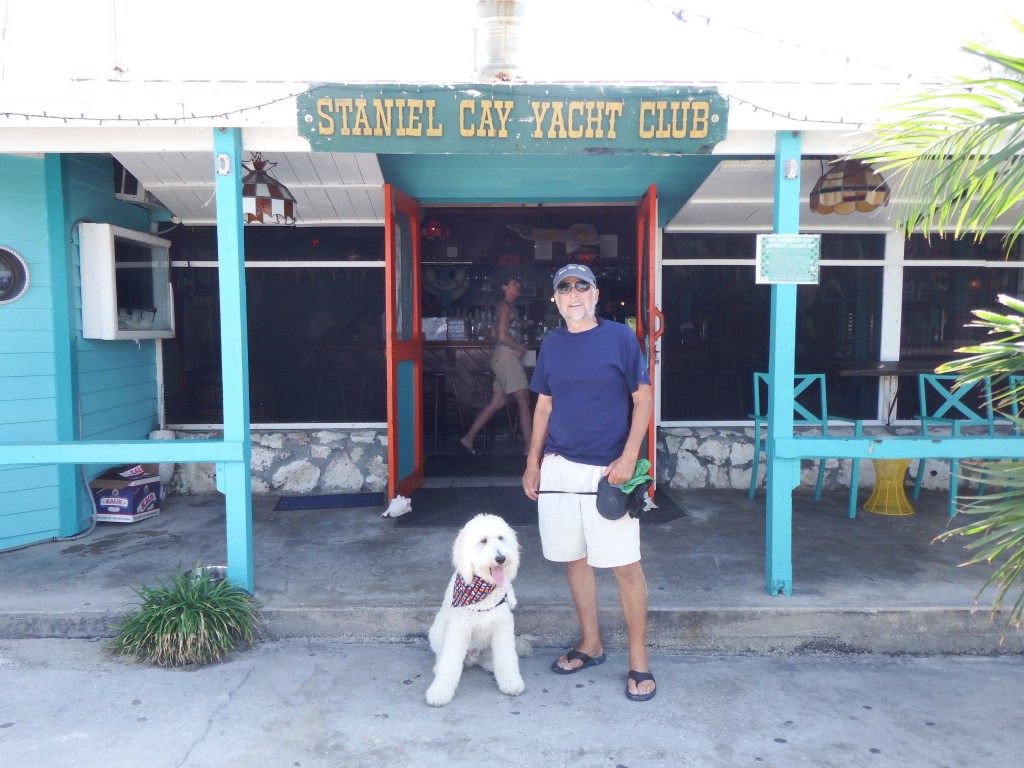 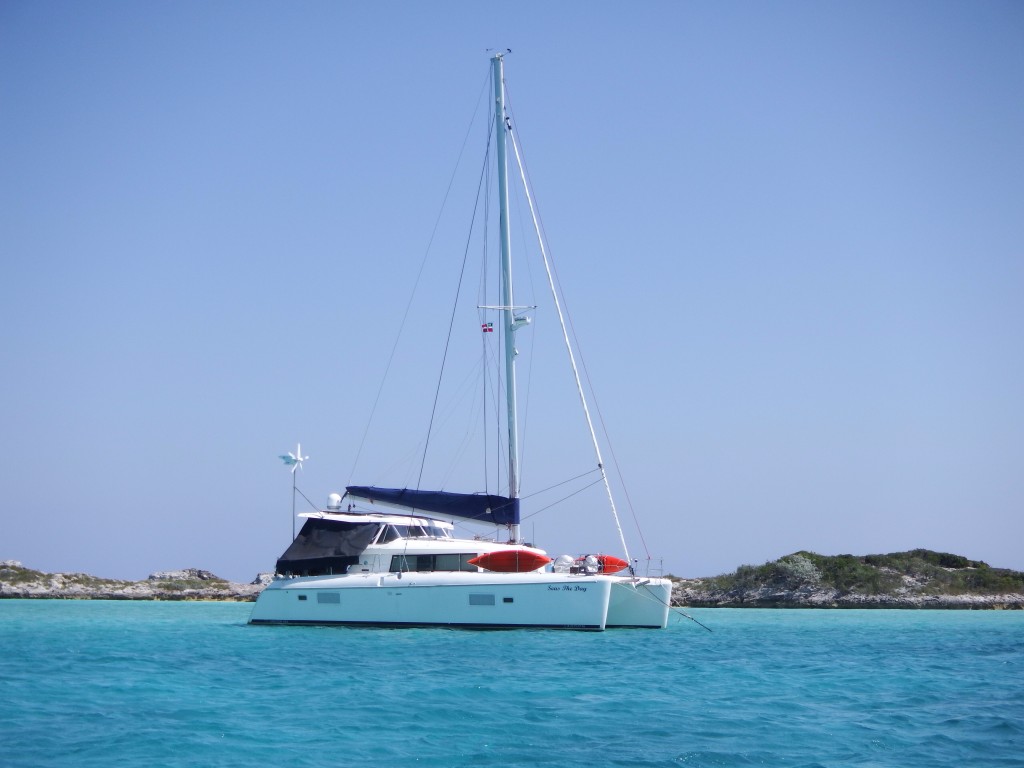 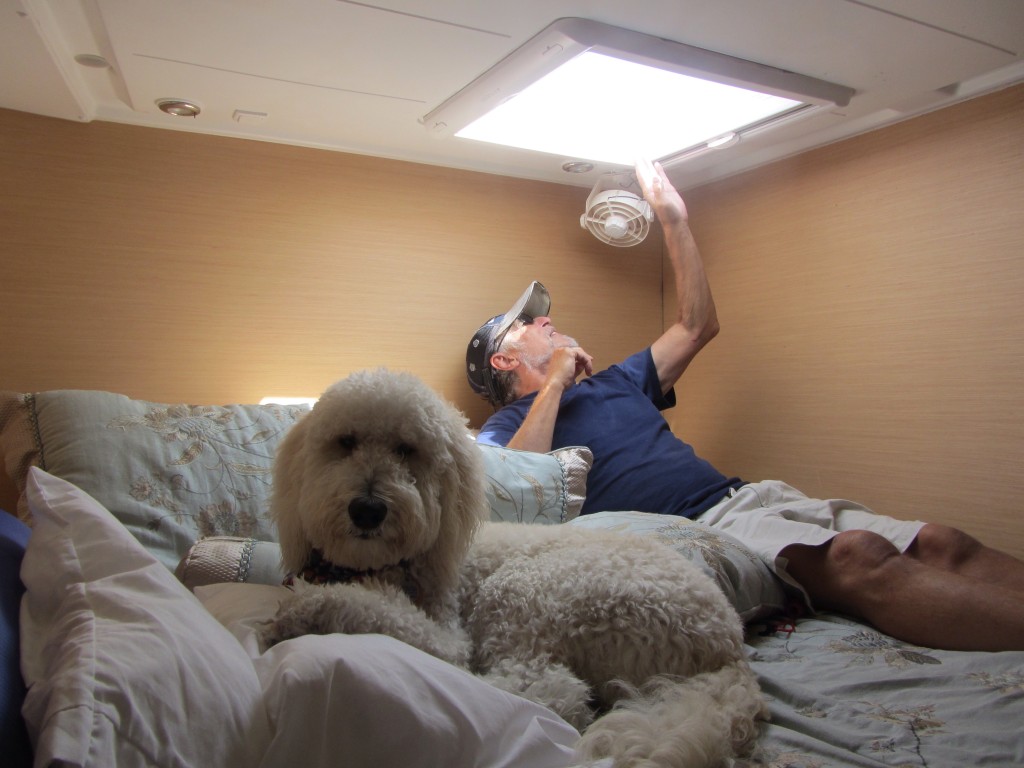 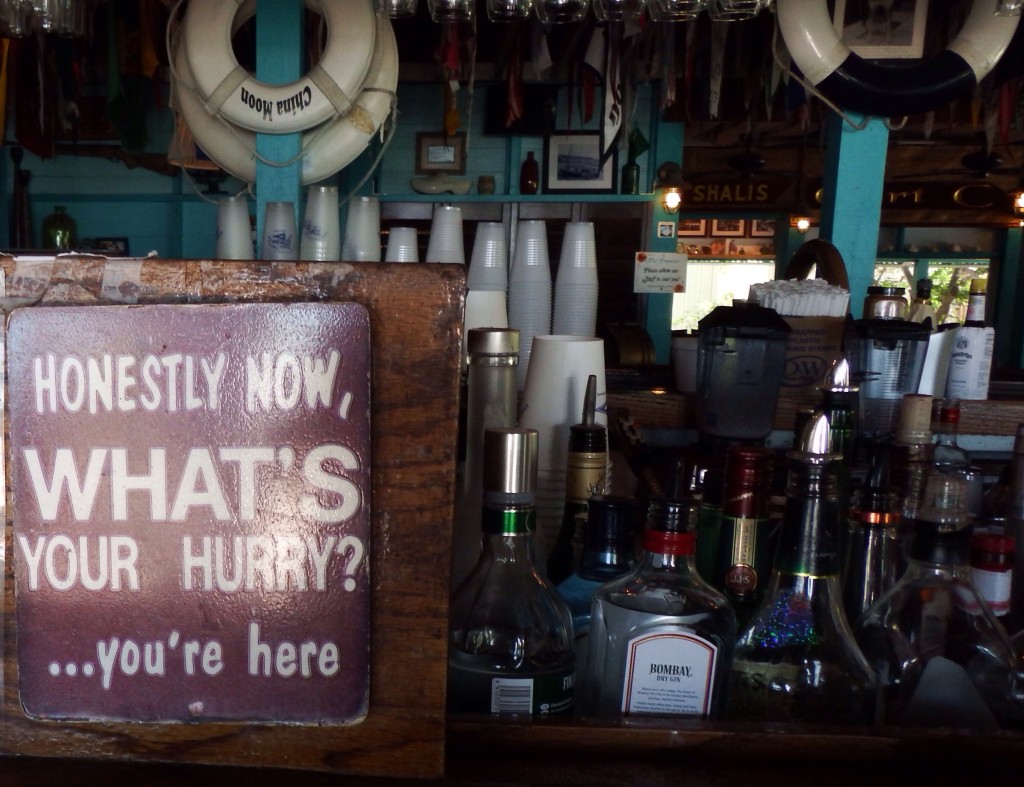