Normally the leg from Staniel Cay to Georgetown would take us at least two days, maybe three if we stopped in Blackpoint. But this time we did it in one day.  It took 8 1/2 miserable hours. The first hour was fine, on the bank to south of Big Farmer’s Cay.  Depths are about 10-12 feet on this part of the trip and the water was very calm.  Then we had to decide if we would anchor near there or go out into the Sound which is hundreds of feet deep. We heard from another cruiser who had just gone out Galliot Cut.  She said it was horrible, but once you got out, the Sound was fine.  The cut was in a rage, wind and current in opposite directions and huge waves from all directions.  It didn’t look good, but we figured it would be a few minutes of being in a washing machine and then OK.  But it wasn’t.  When we got out in the Sound the waves were high and we were going into them.  It was like riding a roller coaster for the next seven hours.  We made good time at 7.5 kts with the jib barely out and the mainsail reefed. Without doing this to the sails we would have been going too fast. Sailor was not happy and he stayed with me in the salon. We alternated between the couch and the floor because it was impossible to stand without falling.  I had put most things away, but I could hear every cupboard and closet having its contents knocked around.

We finally reached Georgetown, in the south Exumas, and were surprised to see how many boats were still here.  Regatta was early this year, in February, and when we got here they had already done the Long Island Rally and were back.  Still all of the anchorages were filled.  We went to the Sand Dollar anchorage and spent two rocky nights and days there before moving down to Monument.  Now the wind has dropped and we are comfortable. In Georgetown some boats move from anchorage to anchorage depending on the wind direction but unless we are going to be very uncomfortable we stay in one place.

When we arrived the entire boat was covered with salt, not just salt water but chunks of salt.  We did something we rarely do and gave the boat a fresh water wash.  Our deck hose can use either fresh or salt water but this called for something very clean.  Everything got washed, and inside the boat it took hours to put everything away and straighten up the messes in closets and cupboards.

We have a rule that we don’t sail to a schedule and we don’t sail in bad weather.  The weather was fine, very sunny, but the wind was strong and not favorable to the direction we were going.  I would rate this as our worst day on the water. We never should have gone in those seas.

We will stay here for a few weeks, maybe go to Long Island.  There is a lot to do here, including a great beach on the Sound for walking and lots of little beaches on Elizabeth Harbor, where we are anchored, for Sailor to chase balls. When we go north we’ll travel slowly and stop at places we missed coming south so fast.

Just before we left Staniel Cay, I ran out of data on my iPad.  It is very easy to add voice or data to a phone, but for a tablet the procedure is difficult involving taking the SIMM card out, putting it in a phone where the slot is three times as big so the iPad card doesn’t fit in the slot and making some phone calls to add data, then putting the card back in the iPad. I thought I could do it myself this year and in the process ruined one phone.  Luckily I had another old phone so I could use it to talk to my daughter Jennifer back in Florida every night. There is a Batelco office in Staniel Cay but we left the day I realized I needed help.  That was Saturday and although we arrived in Georgetown that afternoon, Batelco offices didn’t open here until Monday.  Today we went into town and a nice Batelcto person got the data on my iPad card and we are good to go for another 2 GB’s.

Even with the bad experience, Sailor still seems to enjoy sailing and especially going ashore in the dinghy.  Below are pictures of him retrieving a ball in deep water and running on a beach bringing the ball back to Mark. He is just learning to like to swim and the retriever part of him is having a great time. 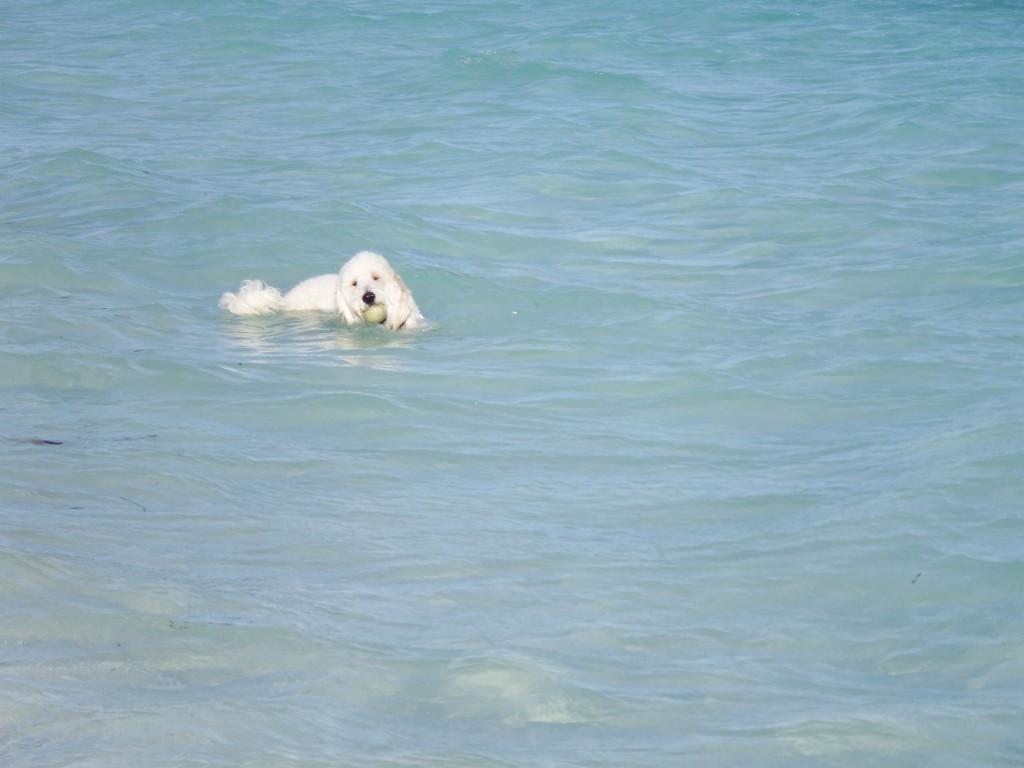 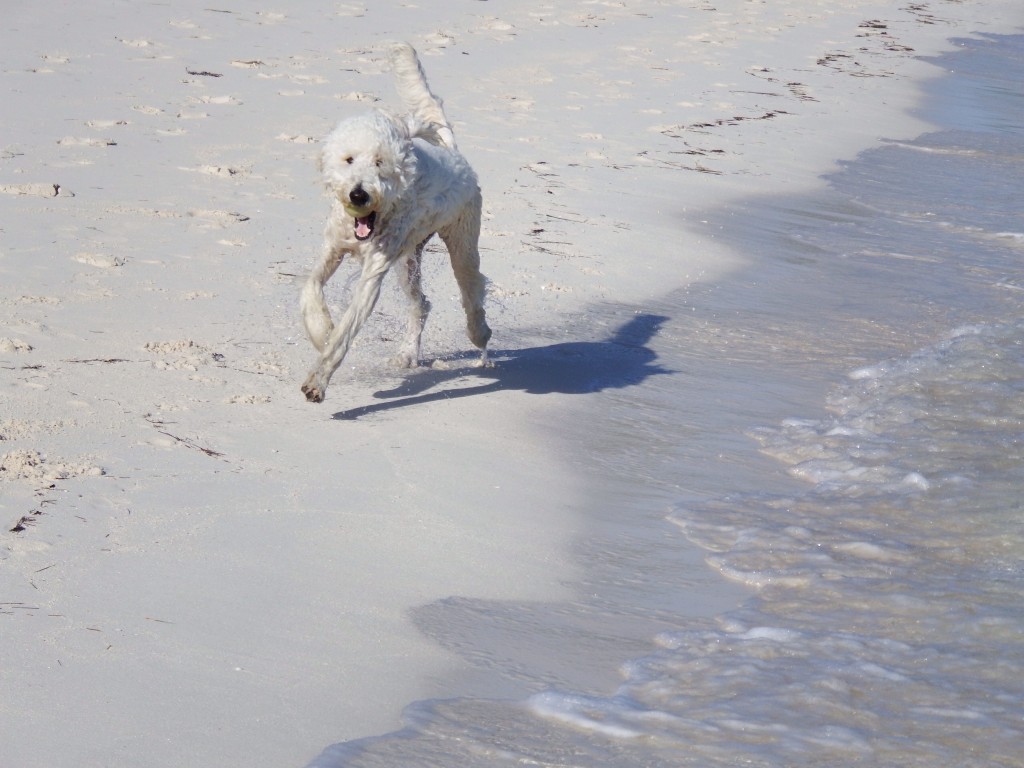