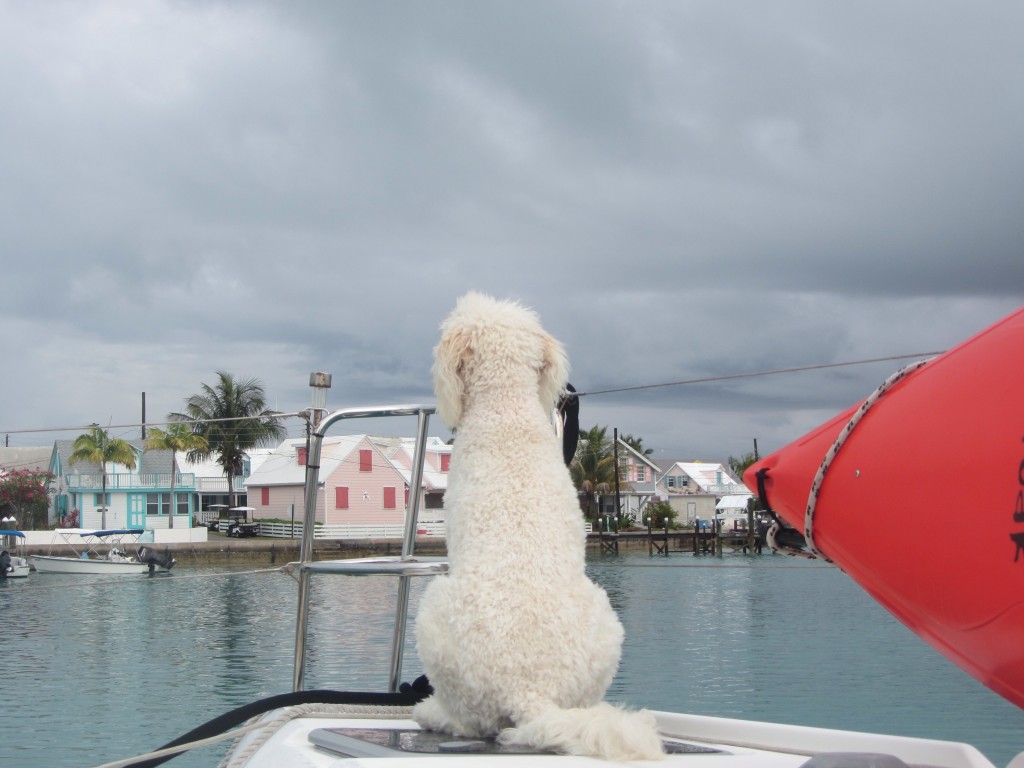 We’ve been in Spanish Wells, Bahamas for three weeks and until a few days ago the weather has been great, very windy but mostly sunny and always right around 82 degrees in the day dropping to the high 70’s at night. The mooring field is protected on all sides and the water is almost always calm even with high wind speeds. We haven’t experienced thunderstorms or even much rain since we arrived in the Bahamas in early March, but this week has made up for it. The photo above was taken this morning at about 0700 when Sailor went up on the forward deck as he does every morning, checking to see if anything happened while he was sleeping.  Being the smart dog he is, I suspect the gray skies did not make him happy, realizing he might not get to fetch his Kong Wubba on the beach today. An hour later, he was inside and this was the view out of the same salon window. 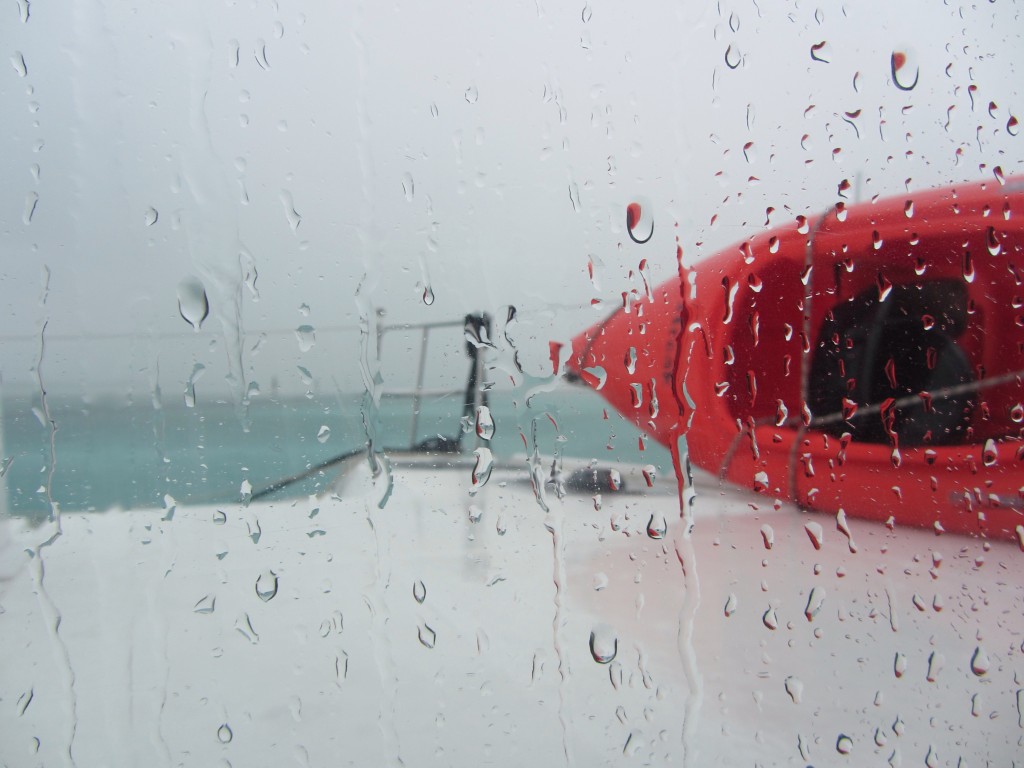 The lightning accompanying thunderstorms is usually a concern when you have a mast sticking up over 60 feet from the water.  However, we are hopeful that there are more inviting targets in the harbor, especially the many large lobster and shrimp fishing vessels on the docks with their tall metal outriggers. After awhile you just can’t worry about lightning because it’s out of your control.

The concern for us with these storms is that Sailor has suddenly become afraid of thunder. Never having a dog with this fear before, I looked to Google for answers and it didn’t disappoint me with lots of links for this subject.  Of course, one’s first reaction is to comfort a frightened dog, but I read this is not a good idea.  Apparently it simply reinforces the fear, so instead we should continue whatever we are doing and not make a big deal out of Sailor’s reaction. When Sailor hears the first “boom” he runs down the four steps to the master companionway, sometimes going into the bathroom or jumping on the bed to get as far away from the thunder as possible. He’s worried, but not shaking, panting, or in distress, therefore it’s not too difficult to ignore the behavior.  I read on a site that one theory is the static electricity in the air from lightning might affect some dogs and they go to a bathroom where the pipes disperse the charge. I also know that dogs can hear or sense thunder long before humans do, although Sailor doesn’t panic until the noise starts.  I found two items in his first aid kit designed to calm pets, Rescue Remedy and Dog Appeasing Pheromone. These were purchased for our last dog Daisy to help her relax on long car rides, but unfortunately they have expired.  A definite purchase when we get back to the States will be a Thundershirt although our hope is to work on getting Sailor to ignore the thunder, since it appears the longer the fear persists, the harder it will be to eliminate. 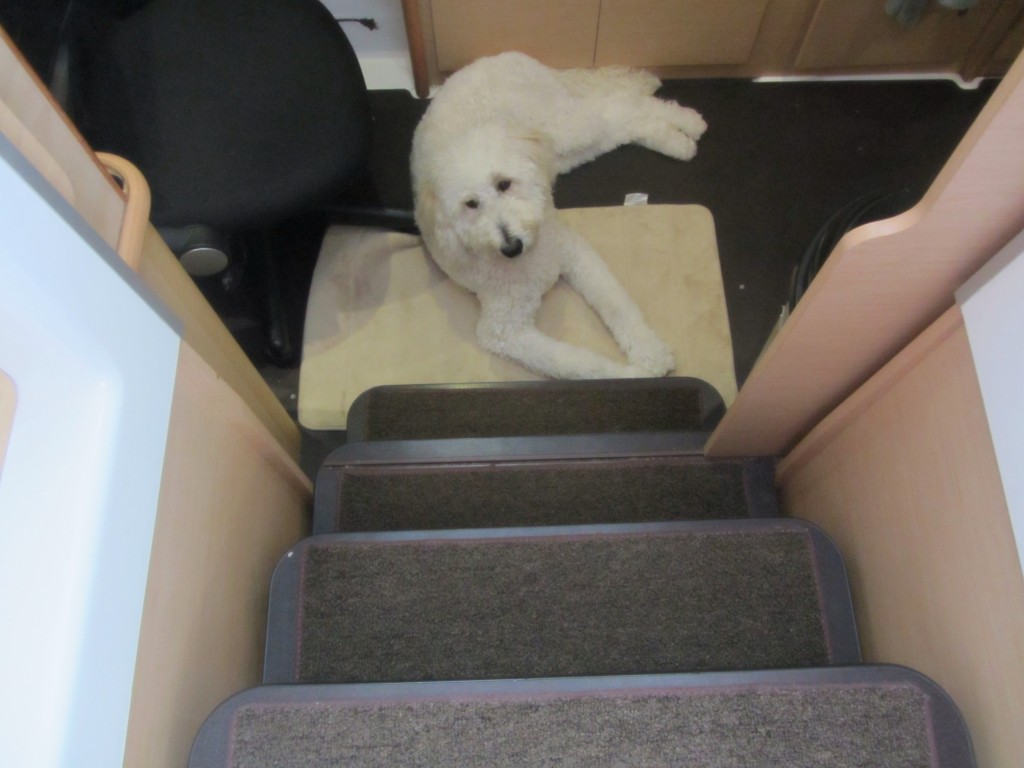 The high winds and now the thunderstorms have delayed many cruisers who planned to be back in the States by now, or perhaps wanted to move on to the next island. Spanish Wells is a jumping off point to go to the Abacos, which is about 60 miles away.  Many cruisers spend the first part of their Bahamas trip in the Exumas and points south, come back north through Eleuthera to Spanish Wells and go to the Abacos before heading back to the US East Coast.

As we get closer to June 1 when we have to be back in Florida for hurricane season, we have started listening to Chris Parker’s Bahamas weather forecast webcast at 0630 again. (We can also listen to him on our SSB receiver, but the iPad and computer reception is much clearer.) As of now, the weather appears to be favorable for motorsailing back to Florida next weekend.  There will be little wind, so true sailors won’t like it, but we will because that also means calmer seas.  From here we’ll go to Chub Cay in the Berries, then on to Bimini, and the following day back to Lake Worth/Palm Beach. We’ll be getting the mast taken down there, part of our “hurricane plan,” and then we’ll return to Sunset Bay Marina in Stuart, FL for the summer and fall. Unfortunately, this time table corresponds with Memorial Day Weekend, so it might be dificult to get a marina slip in Bimini where anchoring isn’t good and powerboats could be coming from Florida for the holiday. Once in Florida I’m sure the waterways will be busy.  “Busy” translates to lots of motorboats speeding around with their wake wildly rocking the anchored or moving cruising boats, i.e. rude South Florida boaters. Lake Worth, however, is less crazy on the water than Miami and Ft. Lauderdale so it shouldn’t be too uncomfortable. We will probably have to anchor there a few days waiting to get into Cracker Boy Boatyard for the mast unstepping.

In the meantime, today looks like a good day to read and relax on the boat. If things get boring we can always watch what is motoring past us in the harbor. This morning before the rain started, MV Legend II, a 200+ ft long commercial vessel, used the mooring field for her turning basin.  Looking at the photo at the beginning of this blog entry of Sailor gazing across the narrow harbor, this is exactly where Legend stopped while moving east, then rotated until perpendicular with her aft close to the dock where the pink house is and her bow between us and a St. Francis catamaran on ball 8. Then she continued to spin around to face west and pulled up to a dock to unload supplies. When ready to leave, Legend was pointed in the right direction to go through the same channel she entered from earlier. These large vessels do this regularly when they bring shipments into the Spanish Wells port. It’s amazing how expertly they are maneuvered  to turn around in such a small space.

Later today, the rain did stop and we were able to go ashore.  Sailor got to go to the beach where he fetched his Wubba in the water and then ran and ran,  expending lots of saved up energy.  We shopped at Kathy’s Bakery for homemade bread and, of course, made our regular stop for a frappuccino, aka iced coffee. 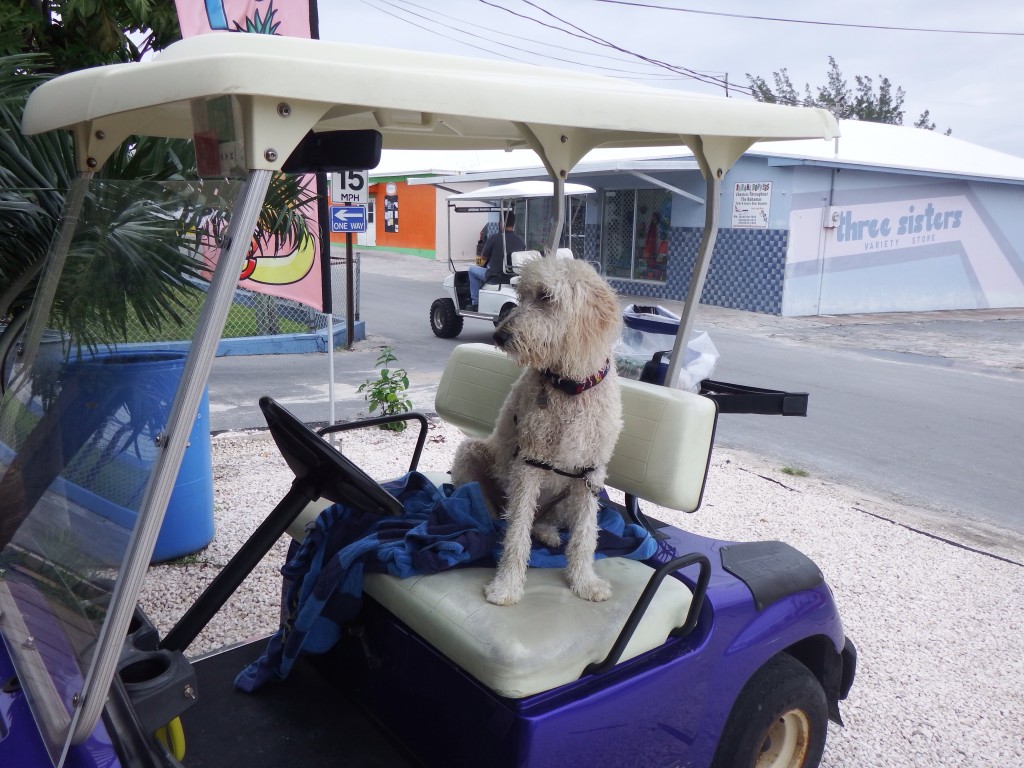 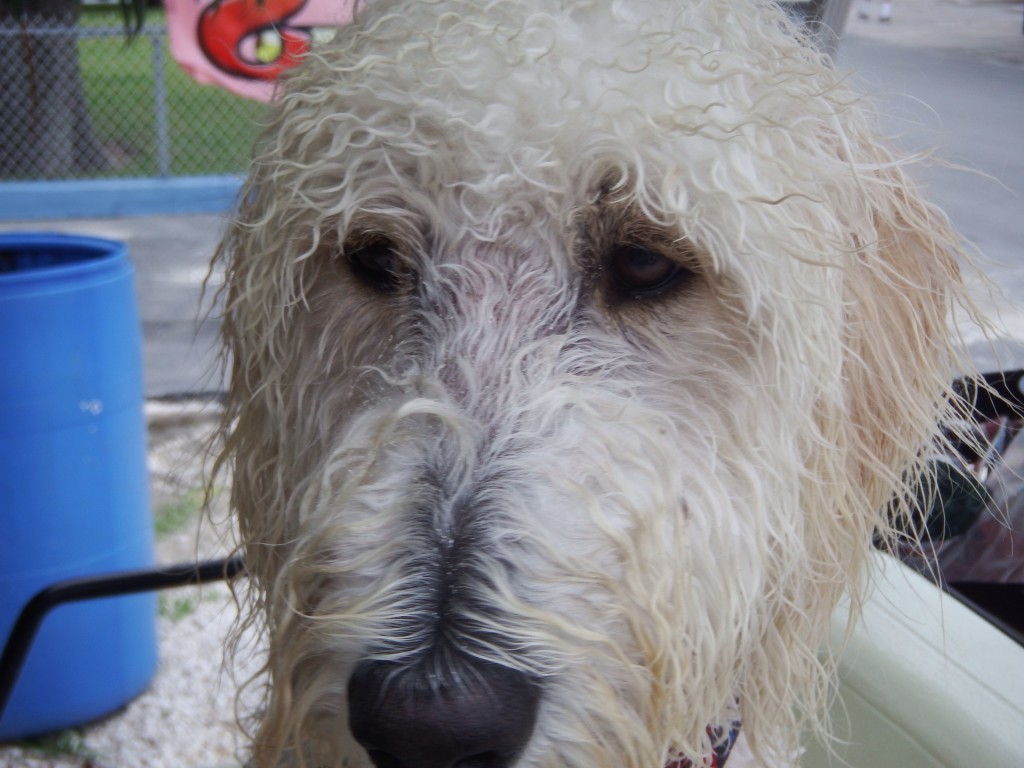 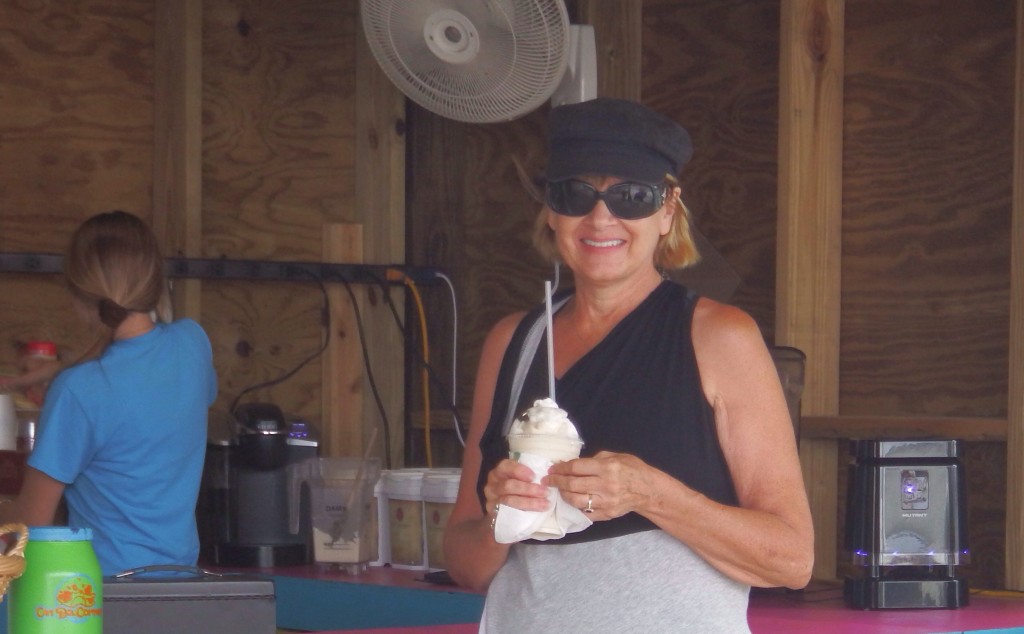