On Monday, all systems were go for a change.  We did some last minute errands, had a last frappuccino until June (unless we decide to visit the last Starbucks we’ll see in Nassau) and motored over to No Name Harbor.  The small anchorage was crowded and the Bay outside was smooth, so we opted to anchor outside the harbor.  It seemed like a smart move because we wouldn’t have to worry about someone dragging into us and we’d have an easy time getting out in the morning.  Or so we thought.

At 0500 we were up and preparing the boat to leave.  We had done most of the final preparations the previous nights with everything locked down and ready for a trip across the ocean.  Then I went to raise the anchor.  We have an electric windlass with a remote control, so usually this is very easy.  However, it pulled up very slowly.  During the night we had turned with the wind and current and we thought perhaps the anchor had picked up something.  We had put out 120 feet in 15 feet of water.  When I got to the marker on the chain to 75 feet, a huge piece of cement, in the shape of a cross with four equal arms came up with chain and rope wrapped around it.  The rope was not ours, but no doubt from previous anchors catching on it.  This was a huge problem.  Mark got the dinghy down and with his knife started carefully cutting some of the rope.  Then he started spinning the cement around and loosing some of the tight wrapped chain, being careful of his fingers.  Suddenly it came loose and dropped to the sea floor.  Mark got the dinghy raised and we were off at 0630, an hour later than we planned, but still early.  As we headed out to sea, we saw this beautiful sunrise. 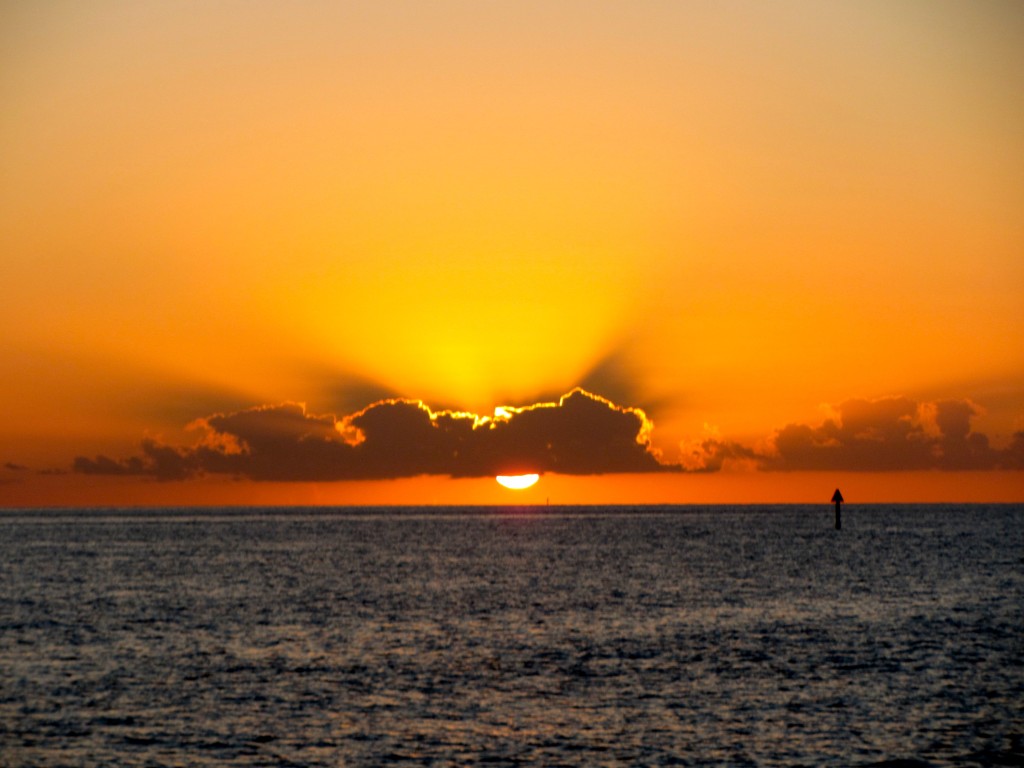 The forecast was for light and variable winds and seas under two feet, perfect weather for crossing the Gulf Stream.  If the wind is out of the north, or very high, it kicks up the seas and creates rough waves.  However, as we continued, the wind shifted and were able to sail, averaging 8 knots which is a good speed for us.  At 1300 we were safely tucked into a slip in Bimini Sands, a marina and resort in South Bimini.  The majority of boats go to North Bimini, which is only a short water taxi ride away.   We are paying $1.50 a foot and some of the marinas in North Bimini are around a dollar a foot.  However the docks there are rickety and there is a lot of foot and car traffic next to those marinas.  Bimini Sands is very peaceful and quiet, with the marina surrounded by condos, two pools and the ocean beach steps away.  We feel like we are in a resort.

After we got settled in, we took a walk on the beach with Sailor.  This was his first Bahamas beach walk and since the beach was empty we let him run.  He loved it, but didn’t go near the water after his “mistake” at Peanut Island in Lake Worth when he thought he was on sand but ran into the water. 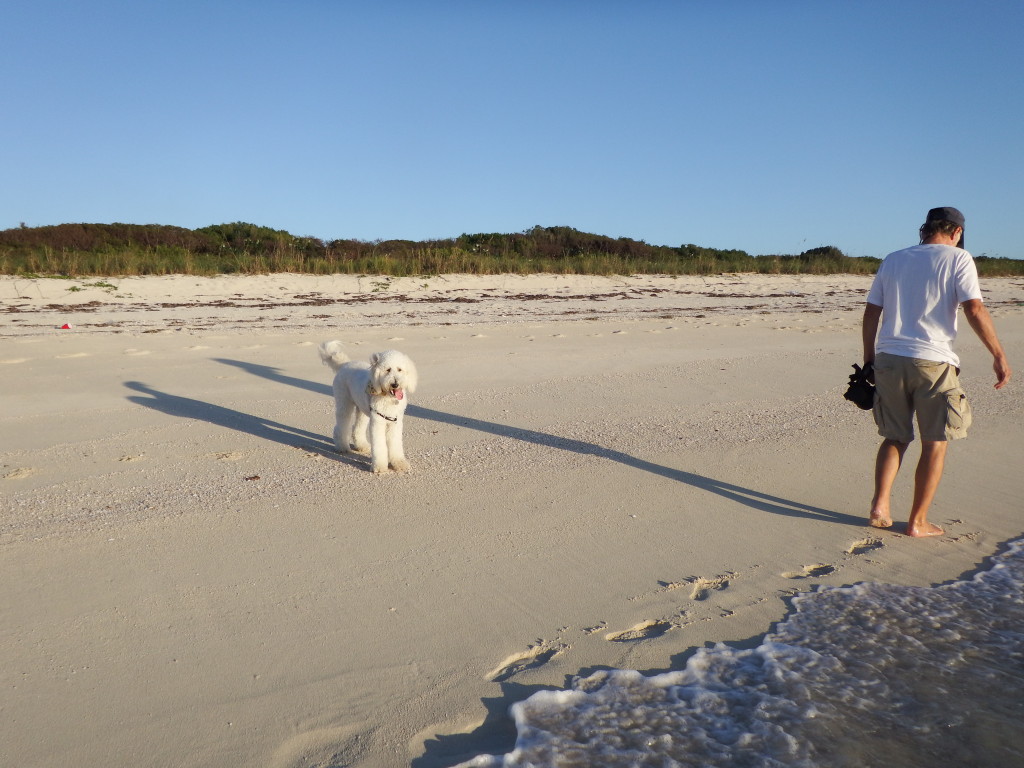 Squalls are predicted for the next few days, so we will leave on Saturday headed to Chubb Cay in the Berries, then on to Nassau.  Hopefully by early next week we’ll be in the Exumas and start traveling south through the many islands of that chain. In the meantime we will enjoy being in Bimini.  Below we are watching the sunset at the infinity pool, next to the Atlantic. 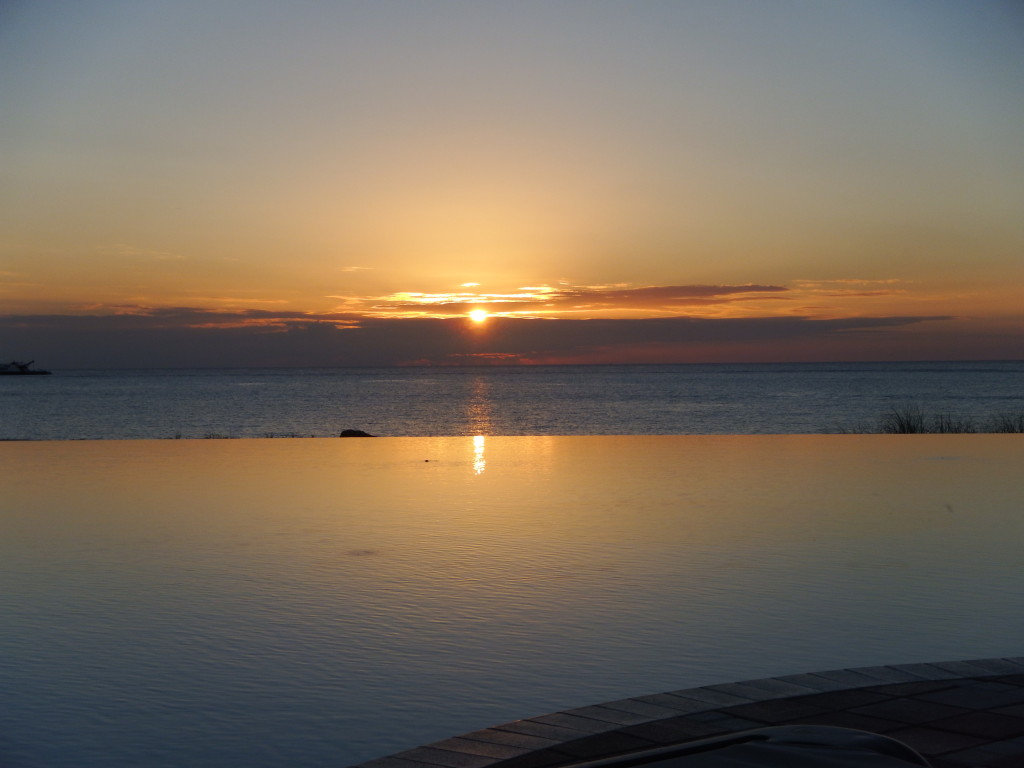 Please check our Facebook page and Instagram site from time to time for updates on our travels.  There are links on the top right side of this blog page.  Also, on the “location” page of this website, our SPOT track will show exactly where we are as we move from island to island.