We know that all cruising plans are written in sand, but we hope to leave Stuart in about a week to begin our fourth cruise to the Bahamas. Mark has a few jobs to finish and we have to start provisioning. Normally we would be ready to go by the beginning of November, but we were delayed due to the two knee replacement operations I had this fall. Briefly, my right knee was replaced on September 16 and the left knee was done on October 14.  They were supposed to be replaced in the same week, but I had a reaction to the anesthesia during the second operation on September 19 and the surgery was postponed.  Of course each surgery was followed by days in the hospital and weeks in rehab and then outpatient physical therapy.  I am now ready to continue the exercises on my own so we can leave Stuart. Unfortunately,  two surgeries sapped my energy for weeks and it’s frustrating for me to be so far behind in my part of the preparations. Normally I spend weeks provisioning and organizing everything on the boat in preparation for a cruise. Below is a photo of an X-ray of my new knees. 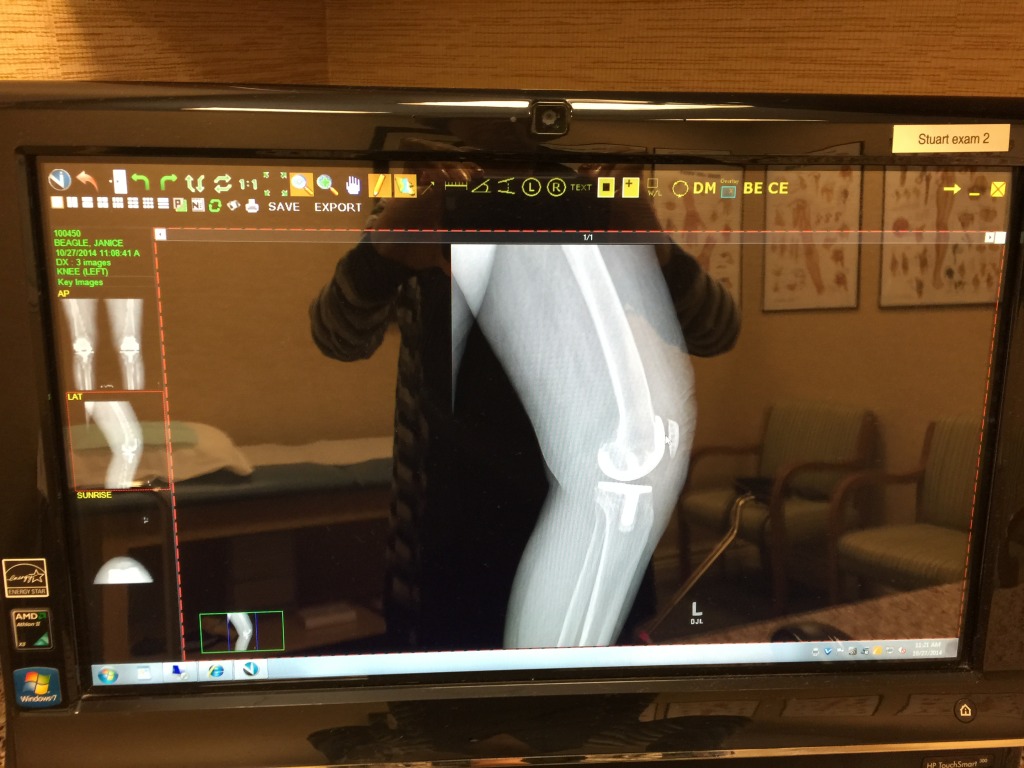 Luckily, Mark had plenty of energy and made changes to help me maneuver more easily on the boat until my knees healed and I got my balance back.  The most important addition was to help me get on and off the boat since we are not on a floating dock.  He built a fantastic ramp with a boarding walkway that can be adjusted up and down with the tide. In the photo below, the walkway was not raised for the tide. Once adjusted it is level with the deck. Also, you can see the temporary wooden handrail he placed on the deck leading back to the cockpit. 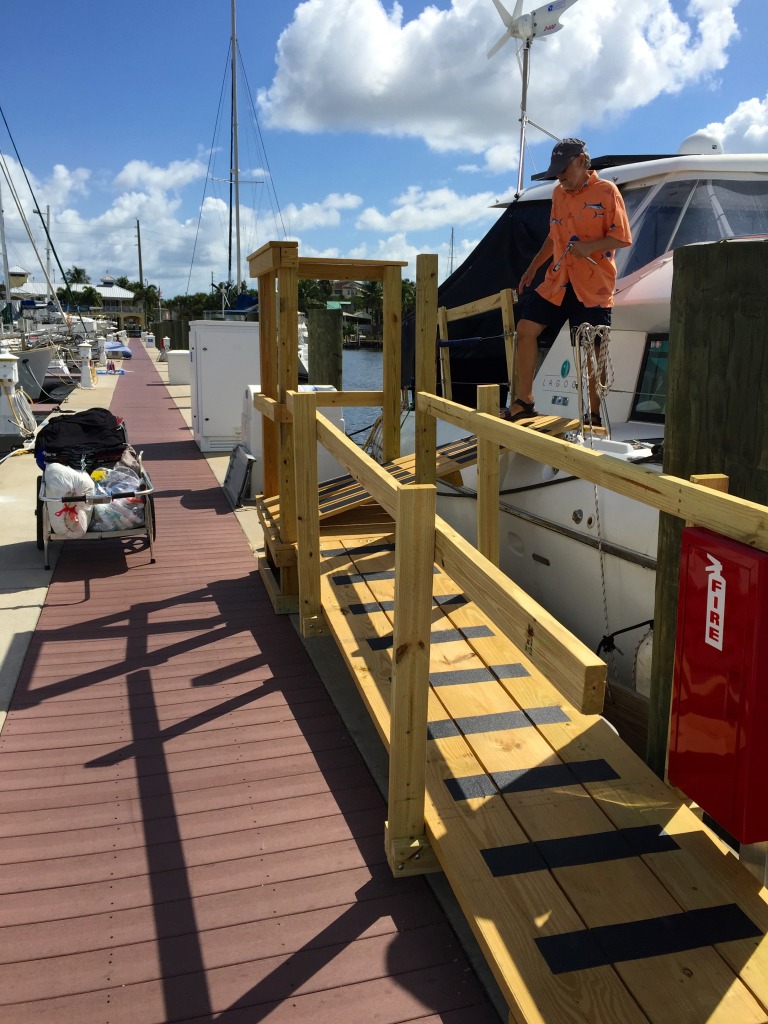 Mark also installed a folding teak seat in the master shower.  It works great and while I don’t need it now, I think it will be useful to sit on when taking showers while we are anchored with rough seas or when sailing.

As always, we have made a number of changes and repairs to Seas the Day during the summer and fall while we have been on a dock at Sunset Bay Marina in Stuart, FL.  Our dinghy got a leak during the last month of our Bahamas cruise last year, so Mark found the hole and repaired it.  He also added book shelves to the cabins (bedrooms), reworked the bookshelves in our office area so they could be used as a pantry, and added shelves to one of the hanging lockers also for food storage purposes. We are hoping all of these shelves will eliminate the need to use so many plastic bins to store our provisions while in the Bahamas.  Mark repaired the sliding door in the salon so it opens more smoothly. He put hinges on a bench seat in the salon which has massive storage, but only had a small opening before to get at what was in there.  In the photo the previous opening is shown on the wooden bench seat under the cushion.  Before Mark made this hinged seat, we had to remove the cushion (held on by velcro) and reach through that small opening to get items.  Now with the hinged bench seat we have easy access to everything stored in the bench and don’t have to remove the cushion to do it. Mark has also gotten all of the boat systems ready to go by performing regular maintenance. 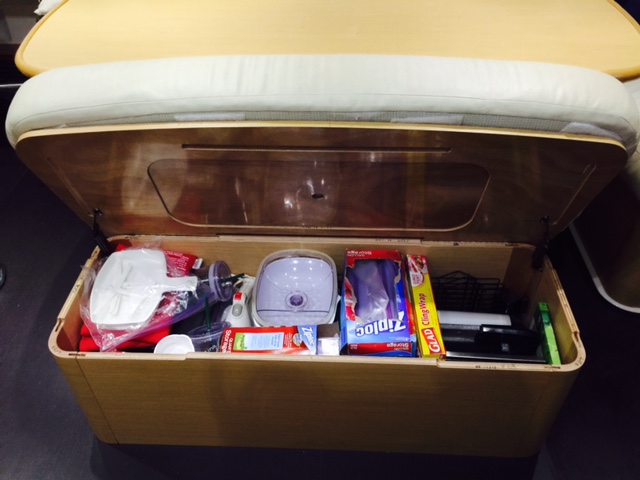 After years of complaining about the fuel consumption of our current generator, we purchased a Honda generator this fall.  The Onan generator that came on the boat is huge (2100 kw) and was designed to work with the hybrid system we originally had on Seas the Day.  It uses about two gallons of diesel per hour.  The Honda generator is much more fuel efficient, using less than a gallon of gasoline per hour.  While we don’t need to use our generator for power very often, due to our wind generator and five solar panels, there are times when we need it and the Honda will be much more cost effective.

Hoping to leave Sunset Bay in about a week, it’s time to start shopping for food and other provisions. I use a lengthy spreadsheet to itemize what we have, what we need, and what we have to buy. Then lists are made and the shopping begins!  Prices for food and other goods are more expensive in the Bahamas, so we will try to buy everything we need for the next five months before we leave.  Also, some things aren’t available in the small stores we usually shop at when we visit the smaller settlements so if we don’t bring these items with us, we don’t have them until we return to the States. We’ll be buying food, paper products, dog food, everything that is in the medicine cabinet, cleaning products, etc.  Basically, we need to stock up on everything we use. Of course we still buy perishables while we are in the Bahamas and usually we realize we have forgotten something. Mark and I both take prescription drugs, so we have to get special permission from Medicare to get six months of them, rather than the three months we can normally get.

Due to my operations, this has been a very unusual season in Florida. I was either in the hospital or in rehab from September 16 until I came back to the boat on October 31, except for three days in between the two surgeries and rehab when I was home. During this time, Mark was usually visiting me, so he didn’t have the amount of time he usually has for repairs and new additions to the boat. Last year in the Bahamas we were somewhat limited because my knees started to hurt so much.  We’re excited to be getting back to a somewhat normal life now.