Leaving Miami at daybreak on Friday, January 1, we had moderately rough seas for most of the cruise to Bimini. The forecast was for light wind, but unfortunately we were going right into it. We decided to stay on the mooring ball at Dinner Key Thursday night since it was New Year’s Eve. Normally we stage at No Name Harbor at the eastern end of Key Biscayne, which is right at the entrance to the ocean, the night before we leave for Bimini. We knew that there would be many boats out on the Bay celebrating and watching the midnight fireworks, and anchored in or near No Name would not be comfortable as it is next to a channel. Leaving from Dinner Key added an hour to our trip but at least we got some sleep. We left at 0650 and arrived in Bimini at 1500. The distance from Miami to Bimini is about 50 miles. Since we were motorsailing into the wind, we didn’t get much help from the sails.

Below is is a photo taken with Miami behind us and a screen shot of what our SPOT track looked like for the first hour, leaving Dinner Key and entering the Atlantic Ocean. (The SPOT track is always available on our website located in the “Location” menu.) 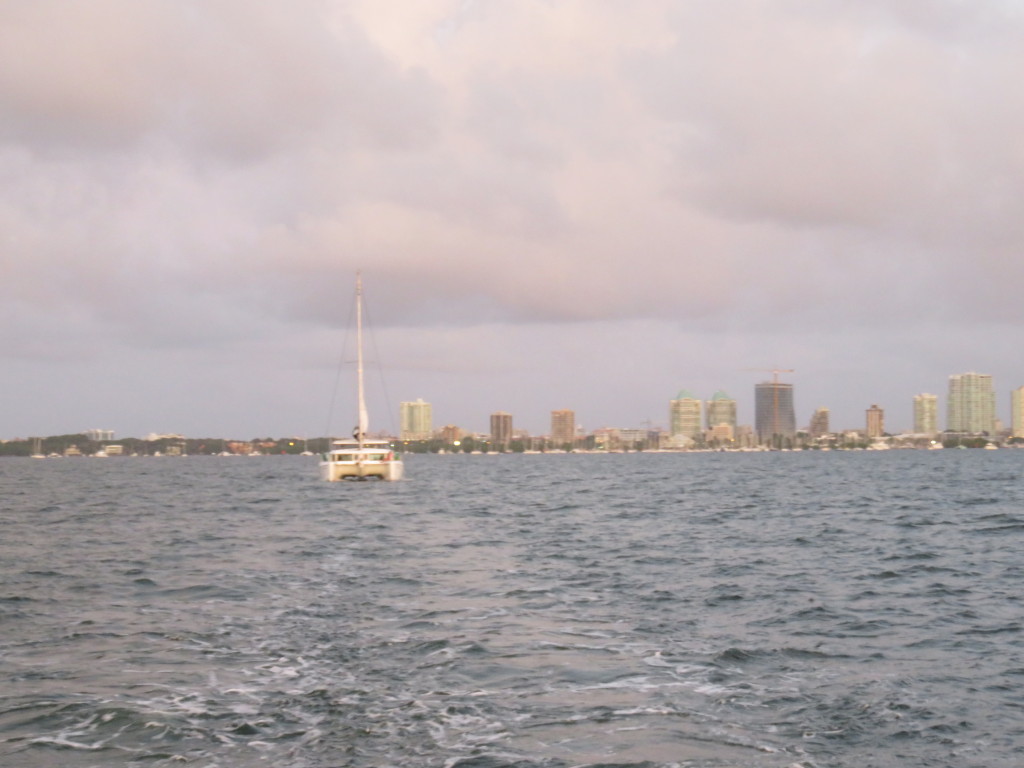 While it was a bit rougher than we like, headed into the waves and “hobby horsing,” to show how comfortable it is in a catamaran, I took a picture of a glass of water that was on the galley counter while the boat was rocking. Notice the water isn’t moving and the glass is not falling over nor is anything else on the counter moving. Outside in the cockpit, our plants are not sliding off into the ocean. This is one of many reasons why we like living and cruising on a catamaran. 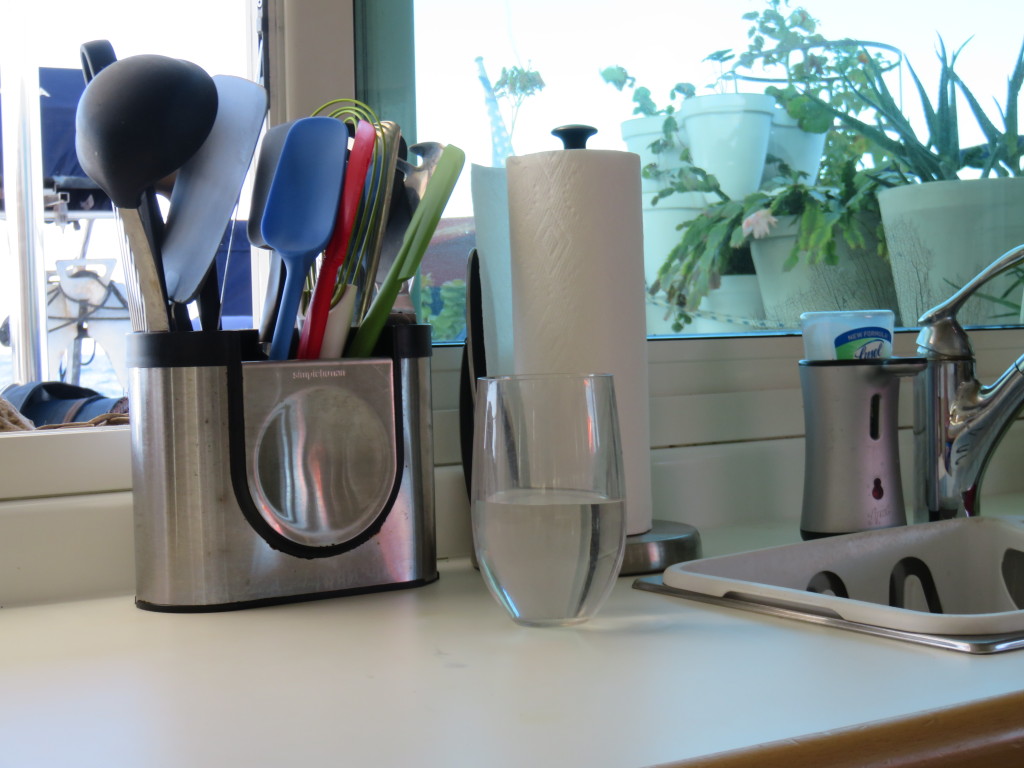 As we approached Bimini, we were happy to see the Bimini Sands Marina and the narrow opening to the harbor. It is not much wider than our 25 ft beam. Once we are in the marina the water is always flat and backing into the wide slips is easy. This is the only marina we have ever stayed at where all slips are wide enough for two monohulls or one catamaran with no post in the middle. There is no extra charge for a catamaran. 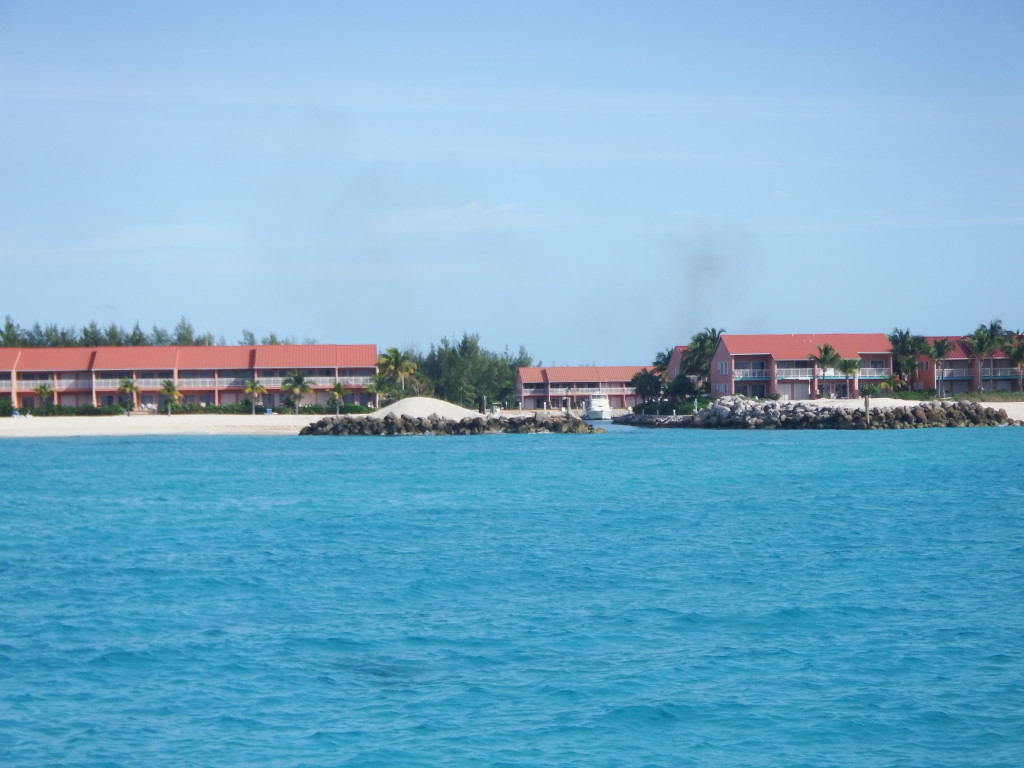 We knew we would be in Bimini at least a week because we only had one more day left of the current “weather window” and that would get us to an anchorage in the Berries. There is a very nice marina called Great Harbour Marina in the Berries, but we would be arriving in the dark and have never been there so we decided to wait out the current weather system in Bimini. We have stayed at Bimini Sands many times, and it is always amazing to us that so many boats go to the North Bimini marinas instead of staying here.  There are only a handful of boats with us at Bimini Sands while the marinas in North Bimini are much busier. Several of the popular marinas there are $1 a ft while at least one is $1.50 a ft. We are paying $1.50 a ft and it is so quiet and calm here compared to North Bimini where the streets are very busy and the docks, which aren’t floating like we have at Bimini Sands, are hit by the wakes of powerboats rushing back and forth in the channel next to the marinas all day long. We are completely surrounded by condos and the water is always flat. For us, it is well worth the extra $20 a day. 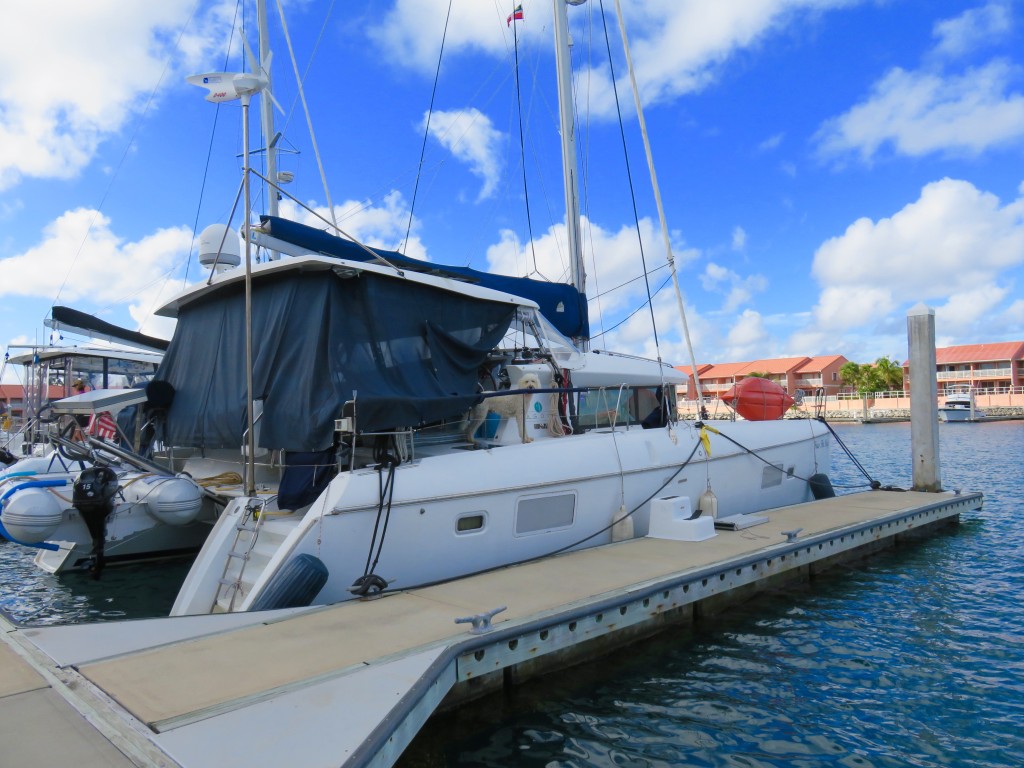 We have been waiting since we were here last May to return to the Bimini Sands Beach Club for their seafood pizza covered with big pieces of lobster, shrimp, and conch as well as veggies. We bought an extra pizza to take back for leftovers. The free shuttle took us to the the Beach Club at the southern end of South Bimini and picked us up after our delicious meal with boat buddies Sandy and Tom (Renaissance II). The colors of the bus match those in the Bahamas flag. 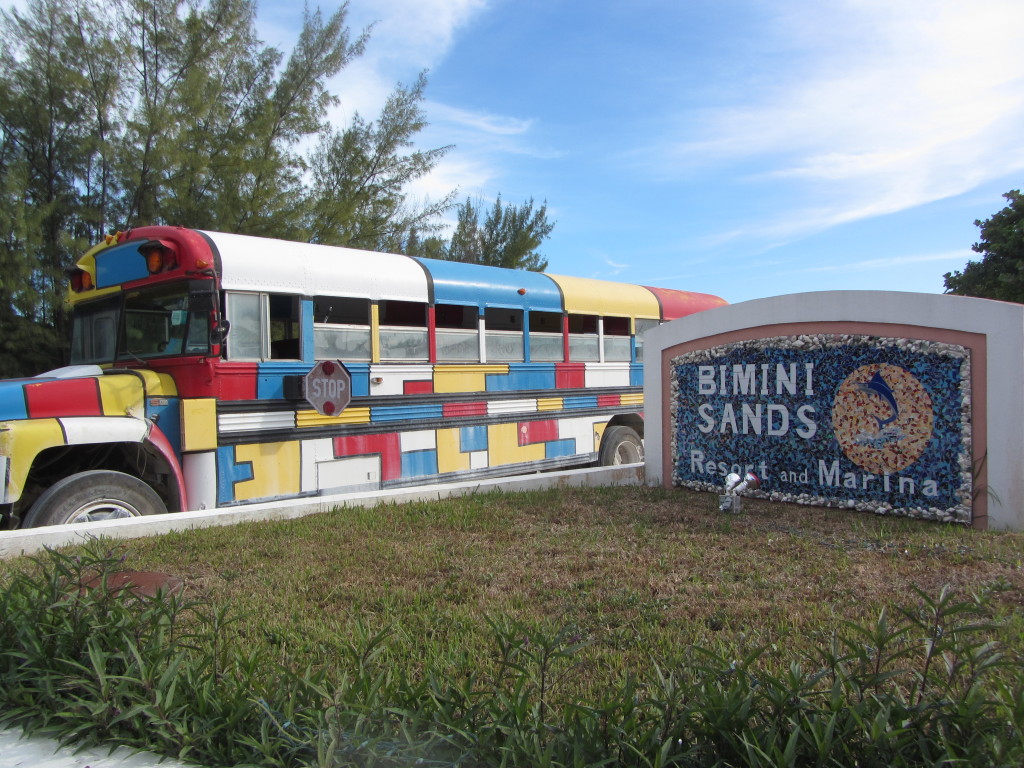 Just like the weather in Miami was unusually stormy while we waited there, we haven’t had much sun in Bimini this week. It makes walking around the town difficult when rain clouds are overhead and the wind is blowing hard, but on Monday we took the water taxi the short distance from South Bimini to North Bimini. Our one goal was to go to Batelco, (Bahamas Telephone Company), to get a new phone and a SIM card for it. After several years of exclusively using our iPad with a Batelco SIM card while in the Bahamas to get online and a small cheap phone to make calls, we decided to get an unlocked smartphone with a hotspot feature so we could also use our US phones and computer online. Our current US smartphones are locked so we can’t put a Batelco SIM card in them. We were lucky to find a Samsung smartphone for a little over $100. It kills me to use an Android, after owning  Apple products since the first one came out back in the early 80’s, but I have to admit this Samsung is a nice phone and has all the features we need while here.

Many of the readers of this blog know that I talk to my 36 year old daughter Jennifer, who is autistic and lives in Florida, each night at 9:30. On past cruises, I used a Batelco phone which cost about 80 cents a minute when I called her each night for 3-5 minute conversations. This season we are using Facebook Messenger when we talk, which is free and uses very little data. The Samsung smartphone has an APP for Messsenger so I am still talking to her on a phone and it seems to be working beautifully, plus I am saving a lot of money.

The Bahamas started providing cell phone service with towers on or near every inhabited island a few years ago with SIM cards that can be easily topped off online or by using purchased cards. When we first came here in December, 2009, we had a wifi extender and used free or prepaid wifi. It was very expensive for the prepaid ones and the unlocked free wifi spots were few and not necesarily safe or broadcasting strong signals. Each year Batelco has improved their plans for cruisers and tourists who are not here all year. This year we can get 5 GB’s for $55. Last year it cost $30 for 2 GB’s and that option is still available. The year before it was $30 for 1 GB. Year round residents can get 15 GB’s for $75 after putting $300 down and there are other cell phone plans for people who are here all year.

We were in Bimini last May and during that visit my son Peter was with us so we took him to all of our favorite places. This time we have been spending most of the time relaxing and as always there are things to fix on the boat. As I write this, Mark is repairing our deck wash system. Sailor was happy to get to his first Bahamas beach of this cruise, just a few steps from the marina. The photo above of the entrance to Bimini Sands shows the beaches to the north and south. They are almost always empty or with one or two other people on them. The beaches on North Bimini are more used since the bulk of the residents of Bimini are located there, as are most of the tourists and cruisers. 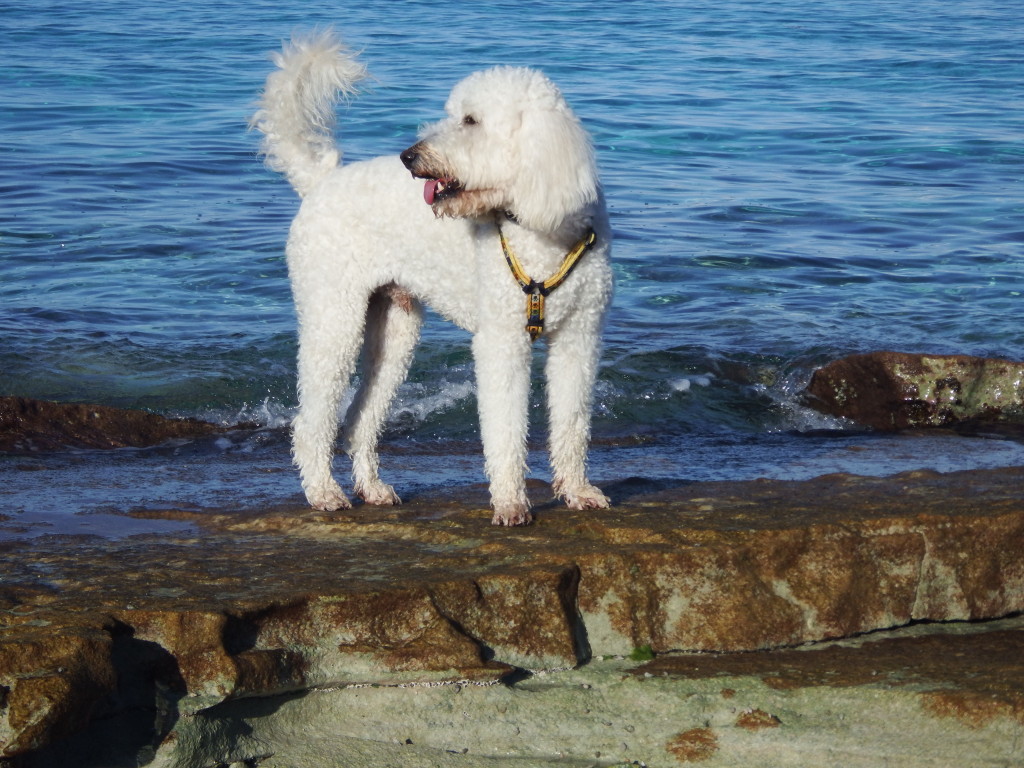 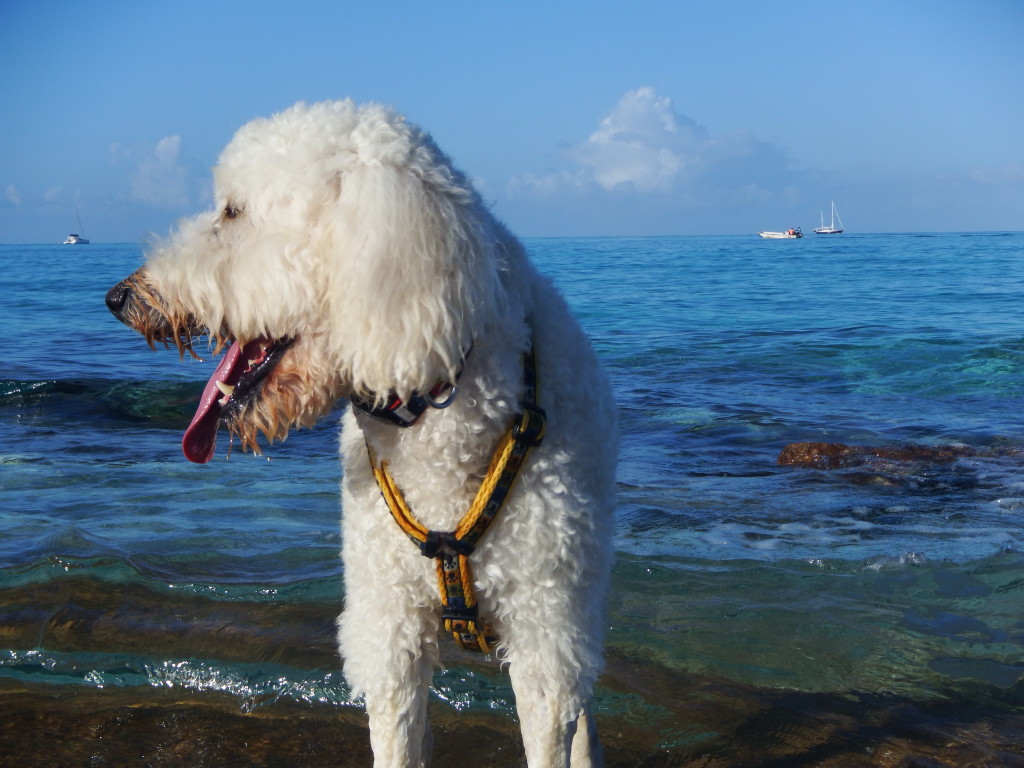 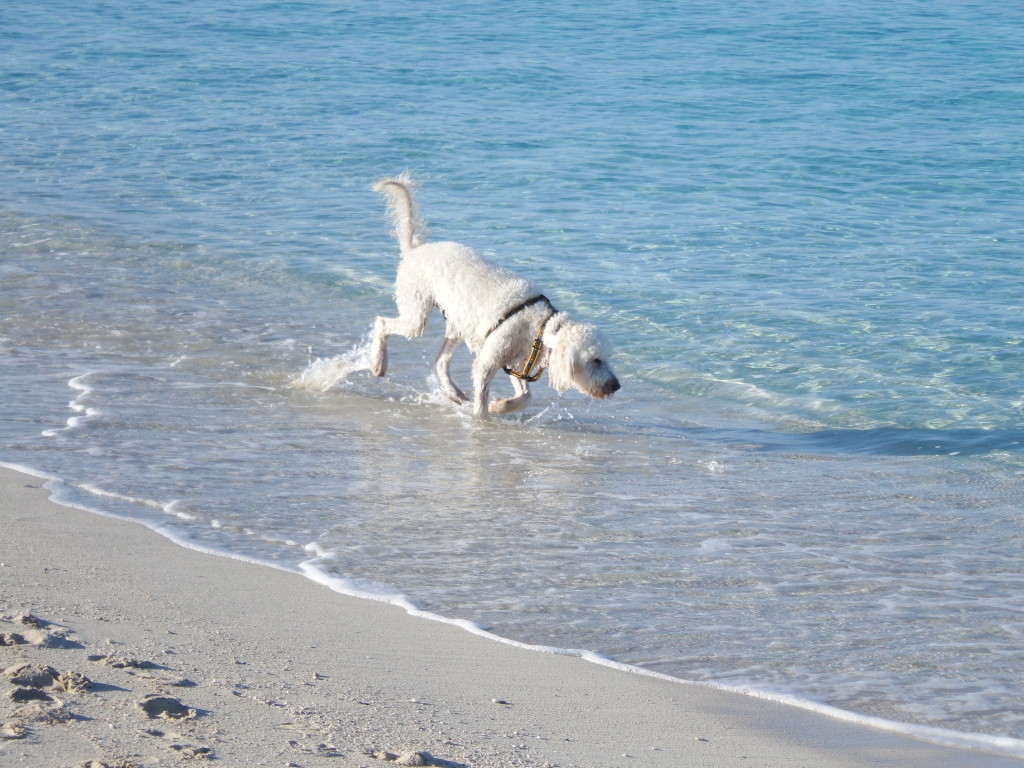 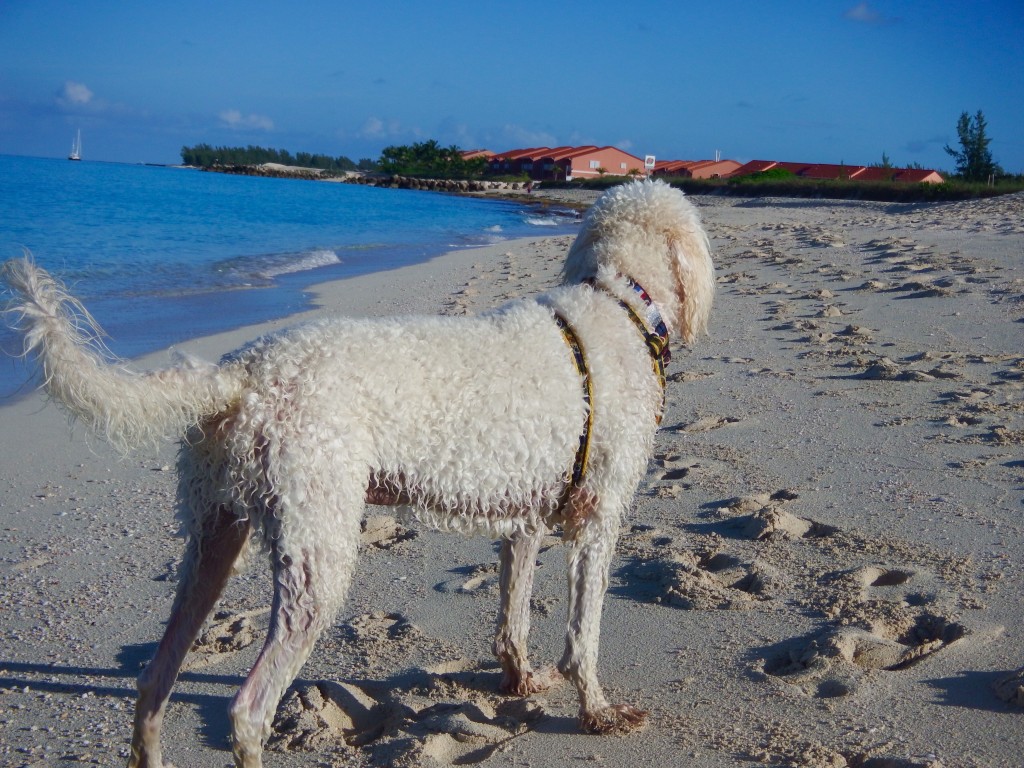 Tonight we will pay our marina bill, minus 10% for being here a week, and go to sleep early. We will leave before sunrise Friday morning at around 0530 and round North Bimini, headed to Chub Cay (pronounced Key) in the Berry Islands. It’s a long day, but we’ll  be on the shallow Bahamas Bank most of the time, so the water should be relatively calm. We will arrive at the anchorage after sunset and it is an easy one to enter in the dark. We have reservations to stay at the Nassau Harbour Club on Saturday and will hopefully leave there for the Exumas on Sunday. We were smart to stay in Bimini this past week. Last night there were reports of squalls in the Exumas with gusts to 106 kts in Cambridge Cay and sustained 70-80 kt wind with gusts up to 105 kts in the Georgetown Harbor with five foot seas at the Chat ‘n Chill Restaurant on Volleyball Beach! This is extremely unusual and we heard that many anchored boats dragged and some landed on the beaches in Georgetown. When we are there we stay on a mooring ball in a very protected hole. That weather has moved out of the Bahamas and we will hope for “fair winds” for the next few days.