Last year we were boat buddies for several weeks with some new friends traveling on a trawler.  They had been cruising for a few years but told us that they were selling their boat…..and they did last summer.  They were simply tired of always having to adjust their plans due to weather.  We hear that frustration from fellow cruisers often, especially in the Bahamas.  There are so many advantages to cruising in the Bahamas, but there is no question that you have to know the weather forecast and be ready to move, or not move, when the wind direction changes.  We subscribe to Chris Parker’s “Marine Weather Center Services.” He broadcasts a weather forecast for the Bahamas Monday through Saturday at 0630 and 0800 on SSB (Single Side Band) radio, and on his webcast viewed on a computer or with his iPad APP. His Caribbean forecast is at 0715. We usually listen to him on the iPad.  After his forecast, subscribers can ask specific questions about weather in their area or request recommendations for when to move to their next destination. Anyone with an SSB can listen to his forecast, but only subscribers can ask questions, view his webcast, or receive his daily email weather reports.

In The Exumas, each island has a shallow side (“The Banks”) on the western shore and a deep side (The Exuma Sound) on the eastern shore. We are always anchored on the Bank side. Very few islands in the Bahamas have anchorages good for all wind directions but most have several anchorages with protection from some wind directions, and if not there is usually another nearby island a few miles away where protection can be found.  If the wind is from the west, often it is difficult to find a protected anchorage since most of the islands are open to the west. When the forecast is for very strong winds and possible squalls, the VHF radio is busy with calls to the few marinas to reserve slips and the mooring fields fill up quickly.

Last week we were at Staniel Cay in the Big Majors anchorage, where most of the boats stay…..until the wind clocks to the west when there is no protection in that area.  We knew the weather would be changing, so a few days before the wind direction was due to clock, we moved to a different anchorage in the Staniel Cay area which has great west wind protection.  We were alone in the anchorage until the day the wind direction was going to change.  Beginning in the morning, boats migrated over to us from Big Majors and other nearby anchorages.  Most followed good anchoring etiquette and spaced their boats well away from others hopefully putting out plenty of chain so they wouldn’t drag.  One of the last boats that came in anchored right between us and another boat, even though there wasn’t room.  There was plenty of space behind us, but apparently they didn’t want to go there. We knew as soon as the wind clocked from the south to the west we’d be in trouble.  That happened in the middle of the night during a squall with 30+ kt wind.  We watched as the boat passed behind us with only a few feet to spare.  The squall continued as their boat floated back and forth very near us so finally I went into the cockpit and shouted back to them to let out more rode (chain) since they seemed content to stay on top of us.  The young French woman (in her bikini) simply shrugged her shoulders. (I’m not sure if they didn’t understand English, which is doubtful, or she just didn’t care.)  Finally, they did let out some more chain and then got too close to the boat that had been next to us before they squeezed in between us. Below is a photo I took through our salon window during the storm.  They were even closer to us when they crossed behind us. 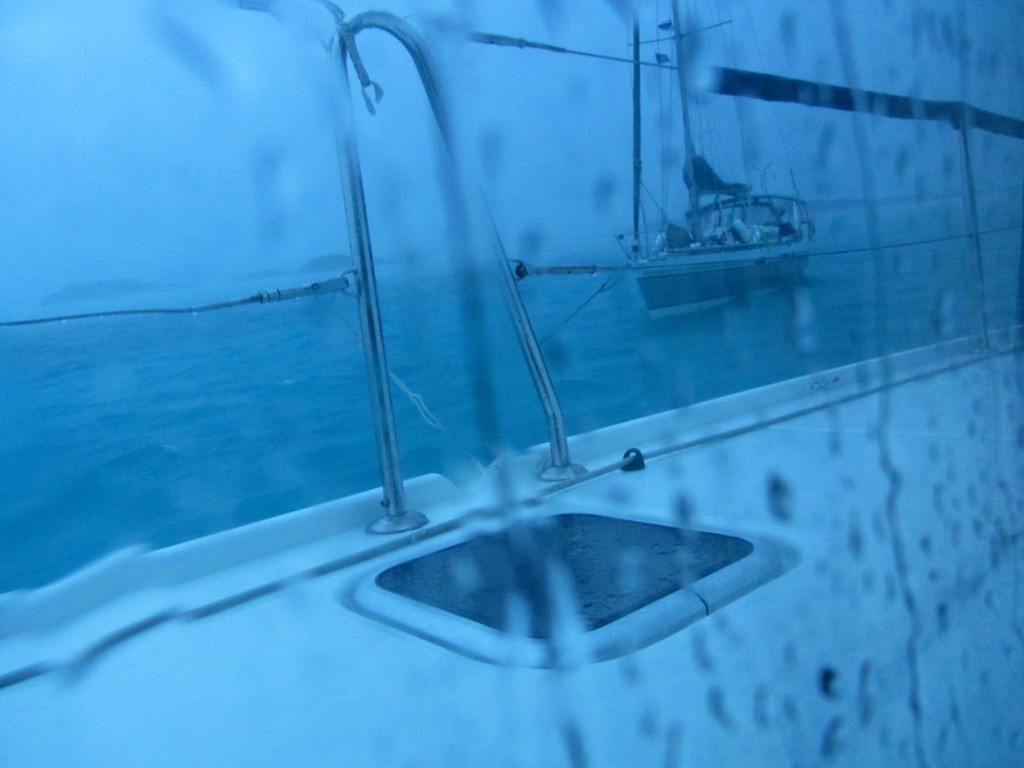 In Georgetown, where there are many available anchorages for all wind directions, some boats shuffle from one place to another every time the wind changes directions.  We usually stay in one place unless the forecast calls for squalls with over 30 kts of wind since holding is excellent and we don’t mind a little rocking and rolling.

Of course, wind is also a big consideration for us when moving from one island to another, or crossing to and from Florida.  When it comes to wind, there seems to be two types of sailors.  One group loves to sail and waits for lots of wind, in a direction that will fill their sails.  Also in this group are the sailors who don’t want to use fuel unless absolutely necessary.  The second group, which we belong to, likes wind but not if it brings big waves. Therefore, we always wait for lighter winds and a calmer sea and then motorsail to our next stop.  Of course no cruiser likes to sail directly into the wind, so if you are going south and the wind is from the south, you wait until it changes or drops unless you love plowing through waves and making slow progress.  Further, crossing the Gulf Stream off the US East Coast, one never wants to leave with a wind from the north because this kicks up large waves going against the northerly flowing Gulf Stream. Right now, scores of cruisers who have spent the winter in the Bahamas are waiting for favorable wind and sea conditions to get back to the States and in a safe place for hurricane season, which begins June 1.

Finally there is one other reason we watch the wind speed and that is for power to our batteries.  When the wind gets above 10 kts, we start to get good charge to our batteries from the wind generator.  This is important overnight when the sun isn’t shining on our solar panels.  With an overnight wind, we are assured that our batteries will stay charged sufficiently to keep our refrigeration running, which is our main power draw. If the battery charge drops too low at the buss, the freezer automatically turns off. (This is complicated by our voltage drop between the batteries and the buss, which I’ve mentioned in earlier blog entries.)

Sailor doesn’t care which direction the wind is from or the speed. But like all dogs,  he loves to feel it blowing in his face. 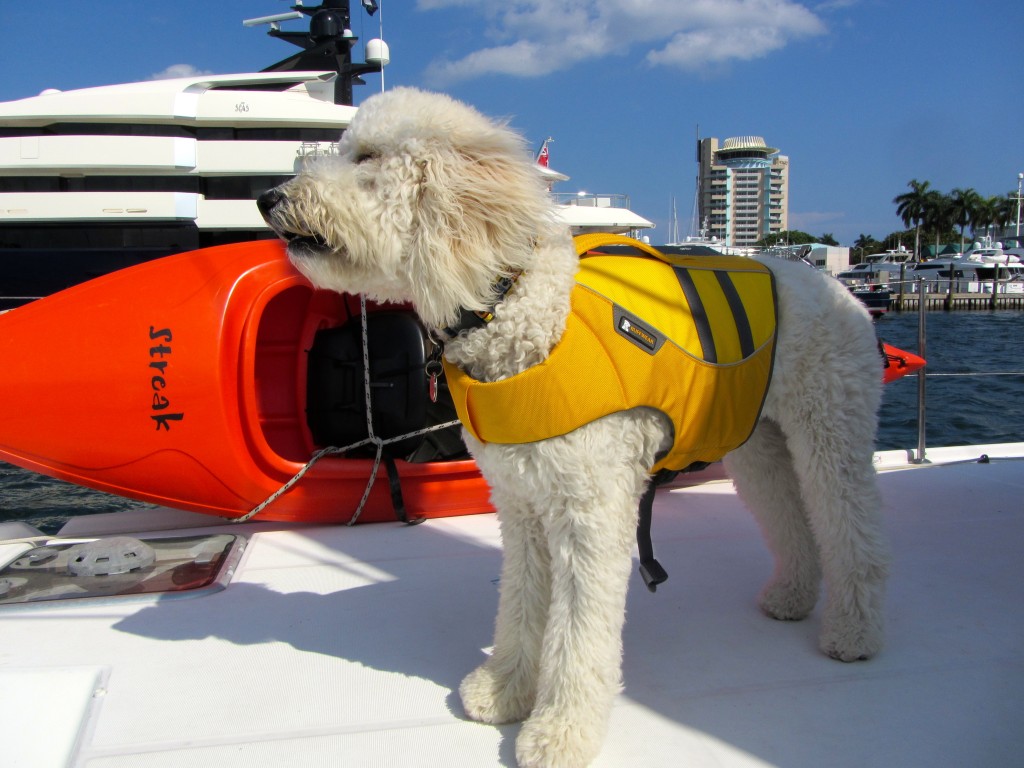