Sailor had his last puppy shots on Wednesday and on Saturday we decided to take him out to dinner with us and then to his first visit to the Stuart Bark Park. Below, Sailor waited for Mark to set up his ramp. He always sits patiently until we say “OK” and then he is allowed to walk  down the ramp to the dock below. 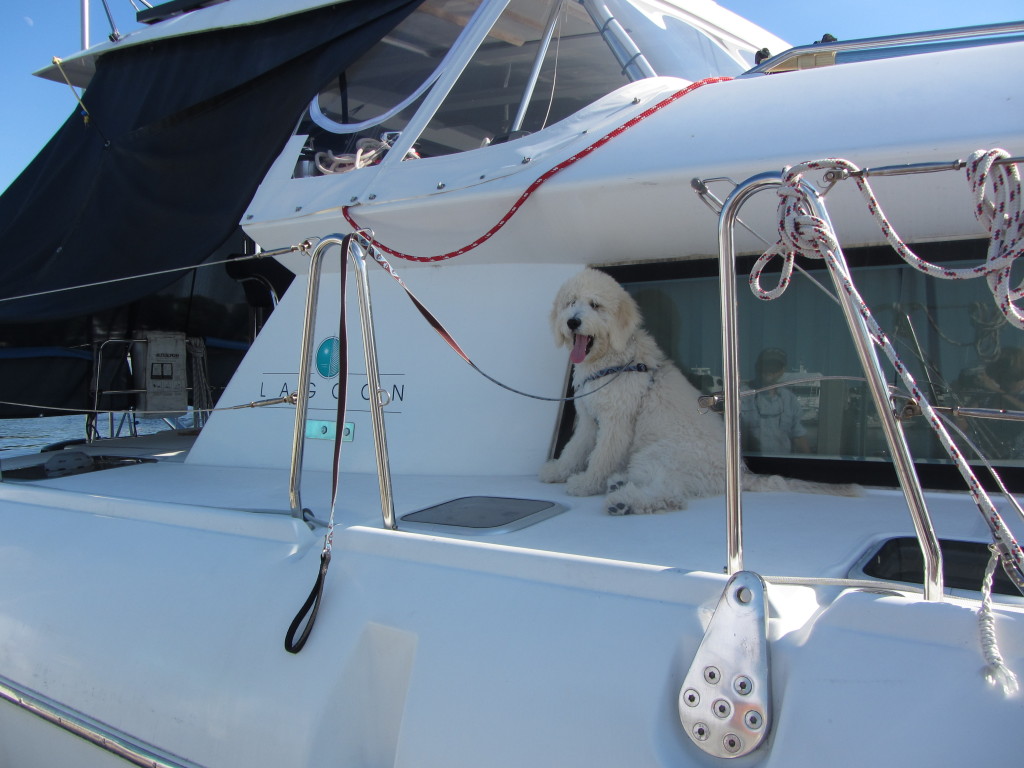 During previous car rides, Sailor has been a bit unsteady sitting or standing on the back seat.  We bought him a “hammock” and this was his first ride in it. There are openings for seat belts, therefore he can still have his seat belt harness locked in. Yes, he is getting bigger and can now see out the car windows.  He weighed 23 pounds at his vet visit on Wednesday. 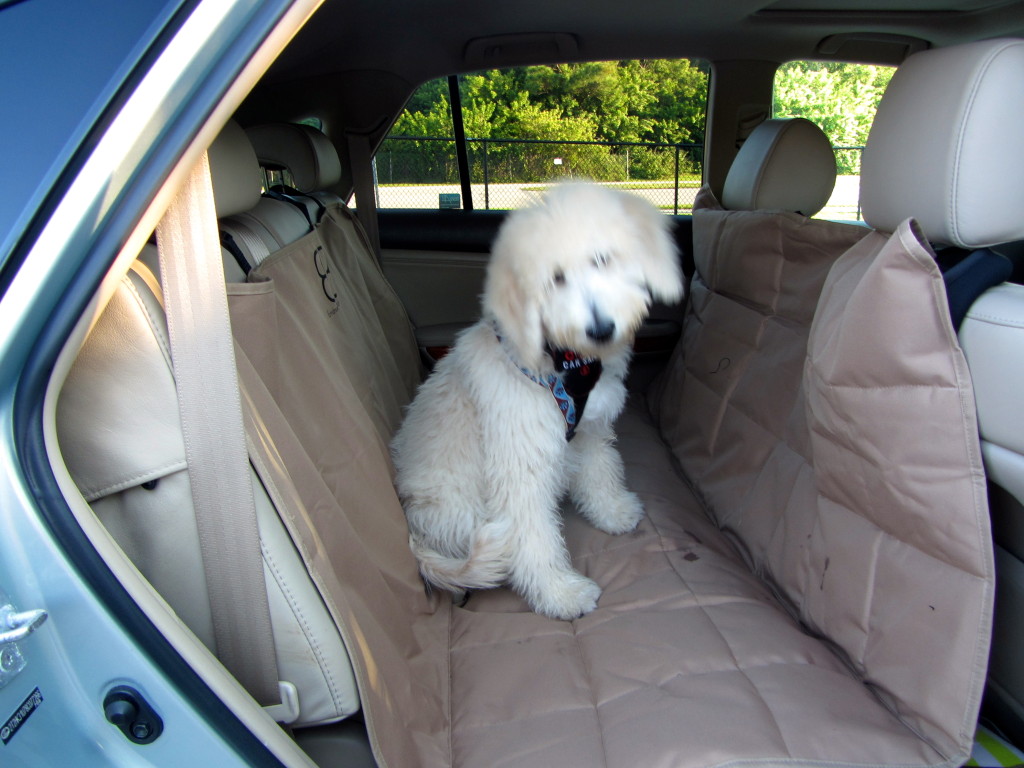 This was his third visit to Toojay’s and once again he behaved perfectly.  He slept under the table while we ate and when we were finished he sat and waited while we got ready to leave. 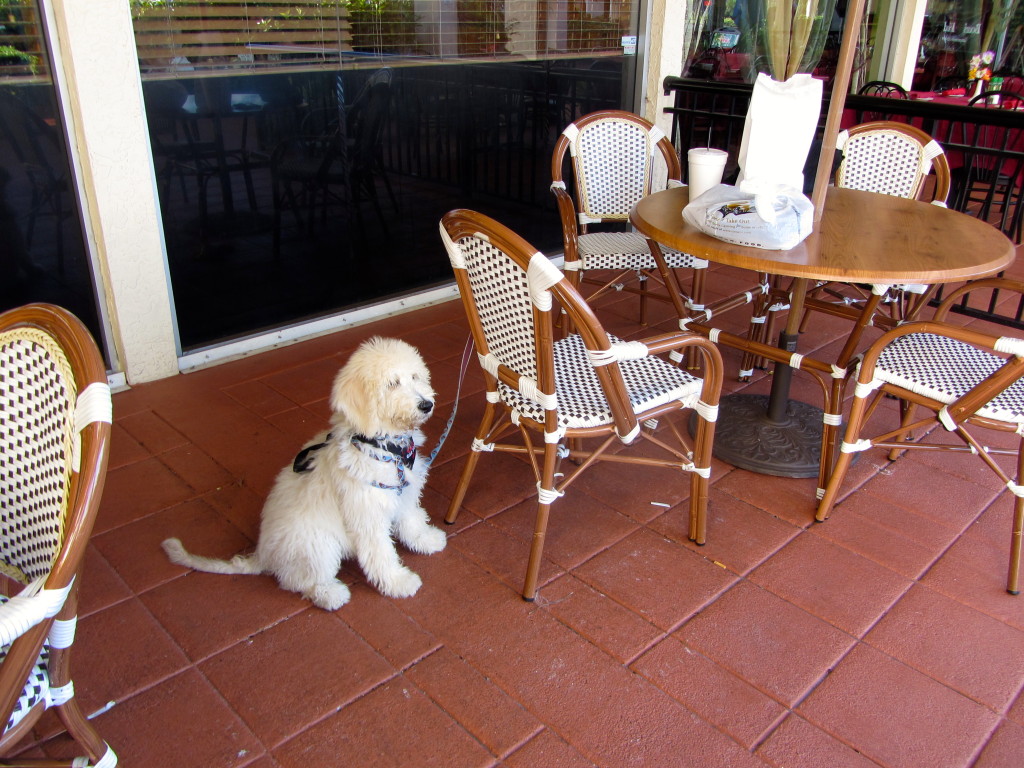 After dinner, we walked next door to West Marine to buy some hose for our new washdown pump.  West Marine allows dogs in the store, especially ones as well behaved as Sailor. 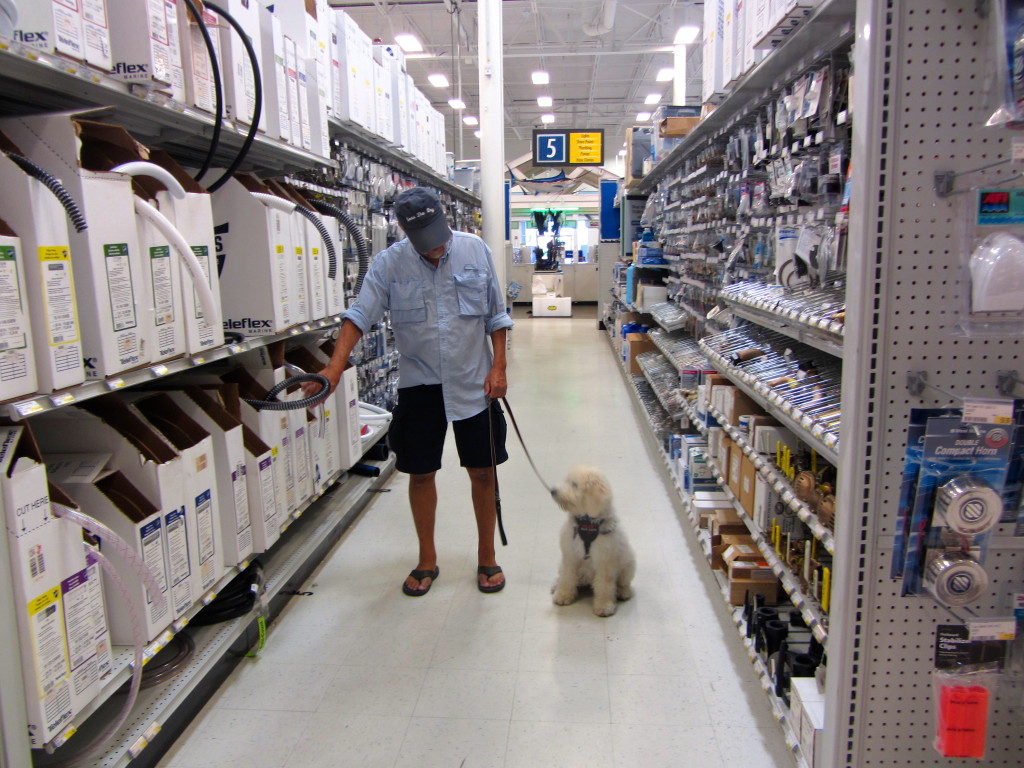 Next we went to the dog park.  We brought him into the  “little dog area” but he seemed to want to be in the “big dog area” on the other side of the fence. Actually, the little dogs felt that way too, either barking at him or refusing to play. They were nice dogs but weren’t interested in rolling around on the ground with a puppy.  Perhaps there needs to be a “puppy area.” 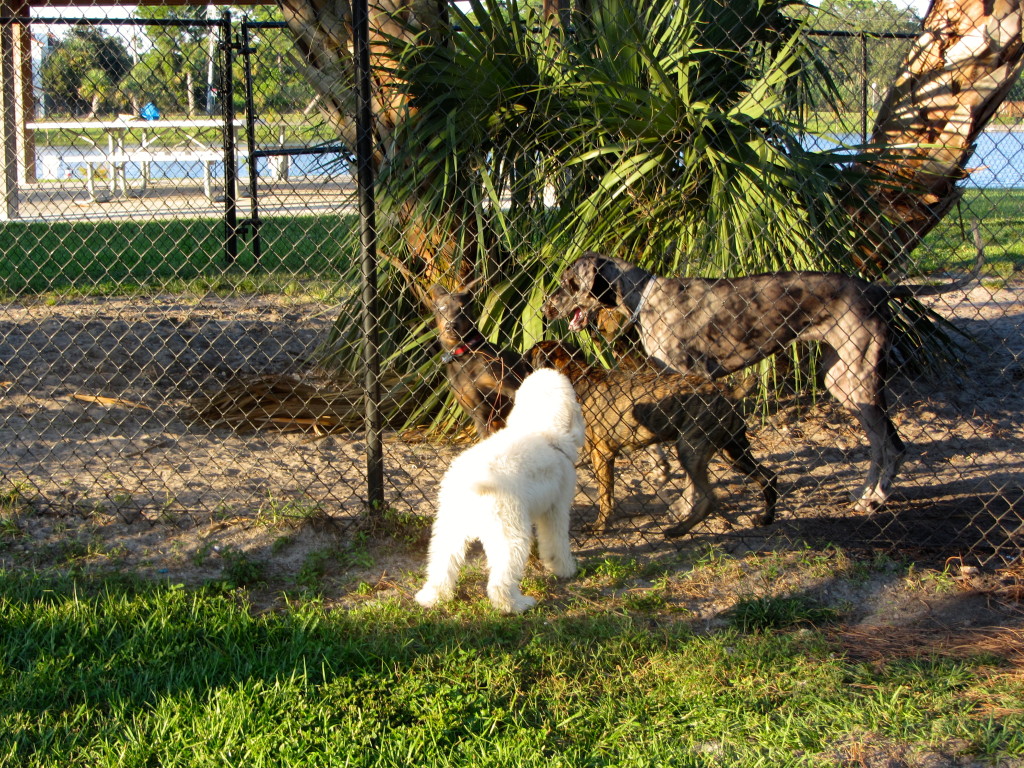 More fun was in store for Sailor on Sunday.  We had been in contact with another Moss Creek Goldendoodle family who live near us in Palm City.  We met Marilynn, Ray, and Smoochie at the Downtown Stuart Craft Show, a short walk from the marina.  Smoochie is the sister of Sailor’s father, Bentley, so today he met his aunt.  It took a long time to walk through the show because we had to stop every few feet for people to admire and ask questions about Smoochie and Sailor (aka Mini-Me).  We met quite a few other dogs, including several Goldendoodles.  One, named Max, turned out to be another “relative” from Moss Creek.  Stuart is a very dog friendly town.

We met in the park near the marina and Aunt Smoochie had to explain to Sailor, with a few barks, that she wasn’t interested in puppy play.  Eventually they calmed down for a picture and we walked to the craft show.

One of the dogs we met at the fair was another Moss Creek Goldendoodle named Max. By next summer, Sailor will be the size of Max who is much bigger than he appears in this picture. 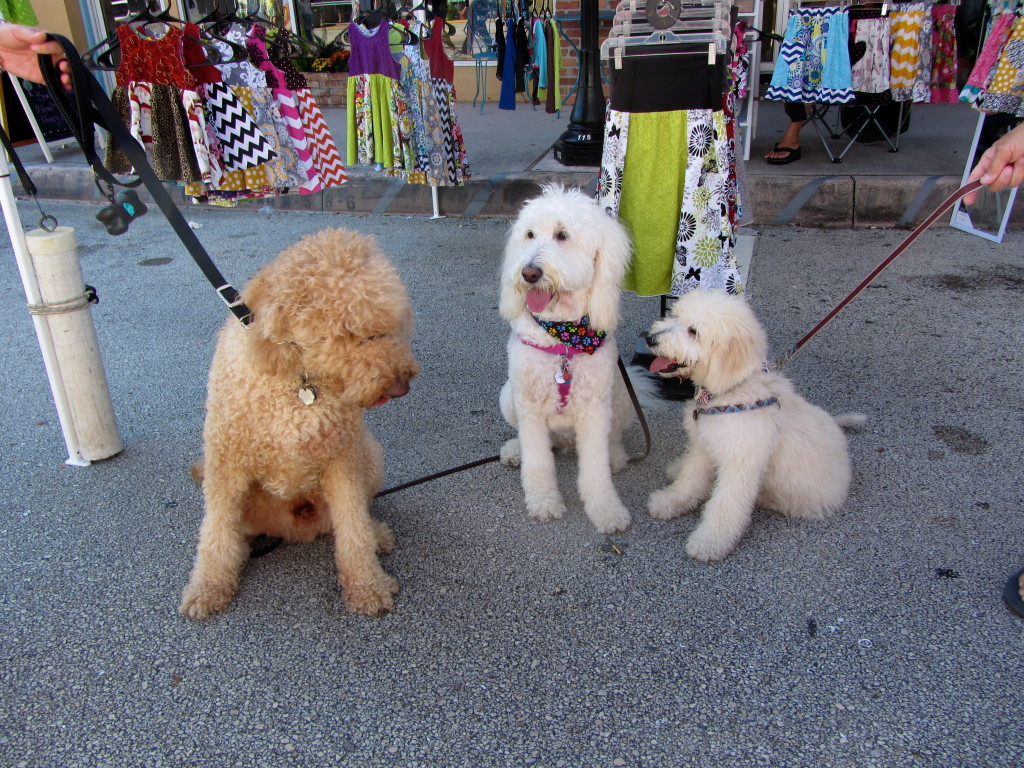 After a fun time, and four new scarves for Sailor purchased from one of the venders, we headed back on the boardwalk.  When we got to the boat, an exhausted Sailor slept for the rest of the day. As a boat dog, Sailor will be meeting many new people as well as lots of dogs, and this weekend he showed us that he is up for the challenge. 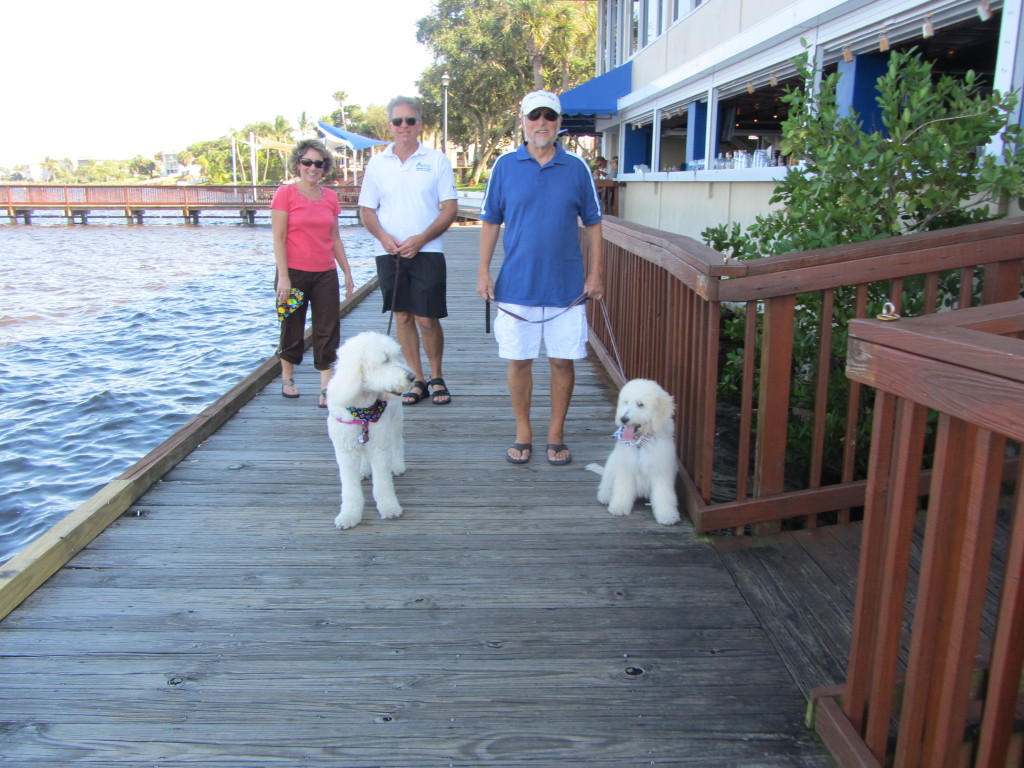