Ask any person on a boat what their favorite part of cruising is, and it will probably be the people they meet. We are still in contact with friends we met in 2008 on our first year living aboard Seas the Day. Each year we cruise, we make new friends and connect with old ones.  Sometimes we don’t see them for years, and sometimes we’ll never pass near them again, but they are friends for life.

If you need help at your home port or at a marina or anchorage you are visiting in the States, you have lots of options on shore. Same thing if you want to socialize. You have friends onshore and friends at your home marina or anchorage, but probably don’t say more than a quick hi to cruisers passing through. There is also a tendency to get to know the same “type” of boater as you are, be it sailor, powerboater, or megayacht owner. This is certainly not true in all cases, but it does seem to happen fairly often, especially when you are away from your home port.

That all changes when you cruise offshore and from our experience, especially in the Bahamas. Once at Cambridge Cay we had sundowners on the beach and the owner of a large yacht joined us. Of course, the sailors scarfed up the gourmet snacks from the yacht owner a little faster than the salsa over cream cheese with Tostitos we brought and the similar snacks from the rest of the people. Another time we stopped at a a restaurant in Eleuthera and the only other people there joined us at our table. We had a nice conversation during which they told us about some repairs they were working on. When asked, they said they were on a motor yacht and at the end of the meal we found out they were staying in an upscale marina at nearby Harbour Island on a 100+ ft yacht. They live in Palm Beach right on Lake Worth where we often anchor and they invited us to stop in to see them (in what we saw later was a large mansion) the next time we were there. Regardless of  the size of boat or type of propulsion people on the seas are living on, when cruisers meet the camaraderie is instant.

There is no better example of “getting by with a little help from our friends” than what happens in Georgetown, Bahamas. Every morning on the Cruisers’ Net, there is a section called “Boaters’ General” when people can “buy, sell, trade or give away something or ask for help.” Earlier this week, we had a reason to ask for that help. To prepare for our departure, on Monday we let go of the mooring ball that we had been attached to for almost three months, and motored across Elizabeth Harbour to the Exuma Yacht Club Marina to fill up our tanks. The entrance to our mooring field is shallow at low tide, so after getting our fuel, we crossed the harbour again to anchor until we could get back into the mooring field. We have an electric windlass with a remote handheld to raise and lower the anchor. Mark was at the helm and I was in front ready to drop the anchor. I touched the “down” key and nothing happened. No problem. This has occurred before and we just need to reset the circuit breaker for the windlass. Didn’t work this time! That was a big problem since we were leaving in a few days and needed to anchor. We went back to the middle of the harbour and floated around for a few hours while Mark checked everything he could think of to fix it. Mark had installed a new windlass two years ago, and knows the mechanics and electronics of our boat well. He worried that the problem could be somewhere in the wiring or in the circuit breaker. Worse yet, he thought he might have to tear the windlass apart. When the tide was up, we went back to our mooring ball (thank goodness we had this option) and he continued to troubleshoot. As they say, cruising is making repairs to your boat in exotic places. We posted our problem on the Lagoon Owners Facebook page and got several suggestions.

The next morning on the Georgetown Cruisers’ Net (on VHF radio station 72 every morning at 0800) Mark explained our problem and asked for help. We got several responses, but the most promising was from a friend on another Lagoon 420 named The Norm. Bruce and Rhonda had the same problem recently and the cause was the wiring in the remote device. They had put in a switch to fix it and then ordered a new remote from the States which their son brought to them in Georgetown. They kindly loaned us the repaired one to try and when we plugged it in, presto! Down went the anchor!! So Mark headed to town to buy a switch, however when he opened the remote he saw the loose wire and decided to try soldering it back on. This worked!  We also ordered a new remote which we’ll have forwarded to us at one of our next stops and will also order a new circuit breaker for the windlass, since several people said theirs had cracked. 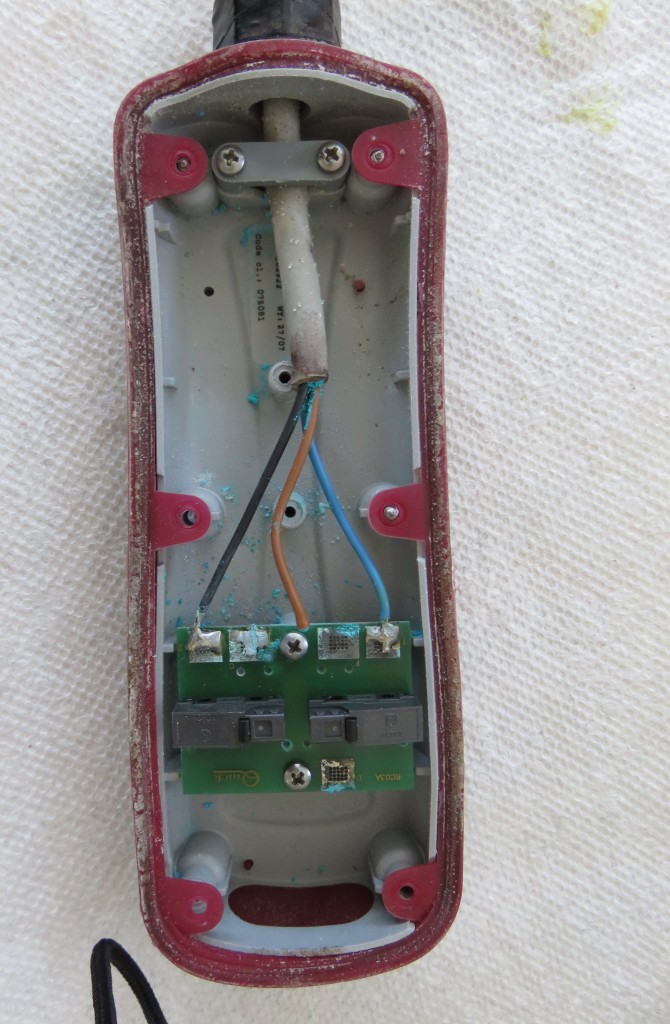 On a daily basis, the cruisers in Georgetown help each other. Whether it is rescuing a dinghy that came loose from another boat and floated by them, coming to the aid of other cruisers with electrical or mechanical problems, answering questions, helping with an injury, etc. cruisers answer the call for assistance. They are some of the most giving people we have ever met, especially considering that help is often offered to total strangers. A few days ago a cruiser on a boat in our mooring field went to make tea, and the can holding the tea bags had a long snake wrapped around it! (They believe it climbed aboard when they spent a few days at the marina a week ago.) They called someone they knew in the harbour who had worked with snakes. He came, captured the fellow, and released it on land. Last night while we were at anchor, someone came on the radio calling the St. Francis resort. They had found a black lab swimming in the harbour and thought it had fallen off a boat named Second Chance. They had called them on the radio with no answer so they called the resort to see if the dog’s owners were there playing poker. They weren’t but eventually were tracked down. In the meantime the dog was safe on someone else’s boat. Georgetown is not unique in this way. Gather any group of cruisers together from 2 to 300+ and if you need something, ask for help and you will get it.

Another positive feature of us being with cruising friends, especially in the Bahamas, is they get us involved in activities where we make more friends. The perfect example of this happened last year when we boat buddied with friends Cathie and Tom (SV Interlude) and they taught us to play Texas Hold’em poker. Twice a week at the St. Francis Resort for the last two seasons, we have played in the “International Texas Hold’em Tournament” with a $5 buy-in. For $10 a time, we have had great fun and, even better, made new friends. We go there to eat dinner and play cards, but it’s also a social event. Cathie and Tom also encouraged us to take a ball in Hole 2 last year. Not only did we enjoy the calm weather in the protected hole, but we made another set of good friends who are on the other boats in the mooring field. We have enjoyed many get-togethers and bonfires on the Hole 2 beach, had  sundowners or meals or just visits on each other’s boats, talked on the beach when other dogs were there to play with Sailor, and of course had friends over every Saturday night for poker on Seas the Day. The photo below was last year’s group, all of them from Hole 2, and this year, since half of these cruisers didn’t return, we invited others and made more friends. 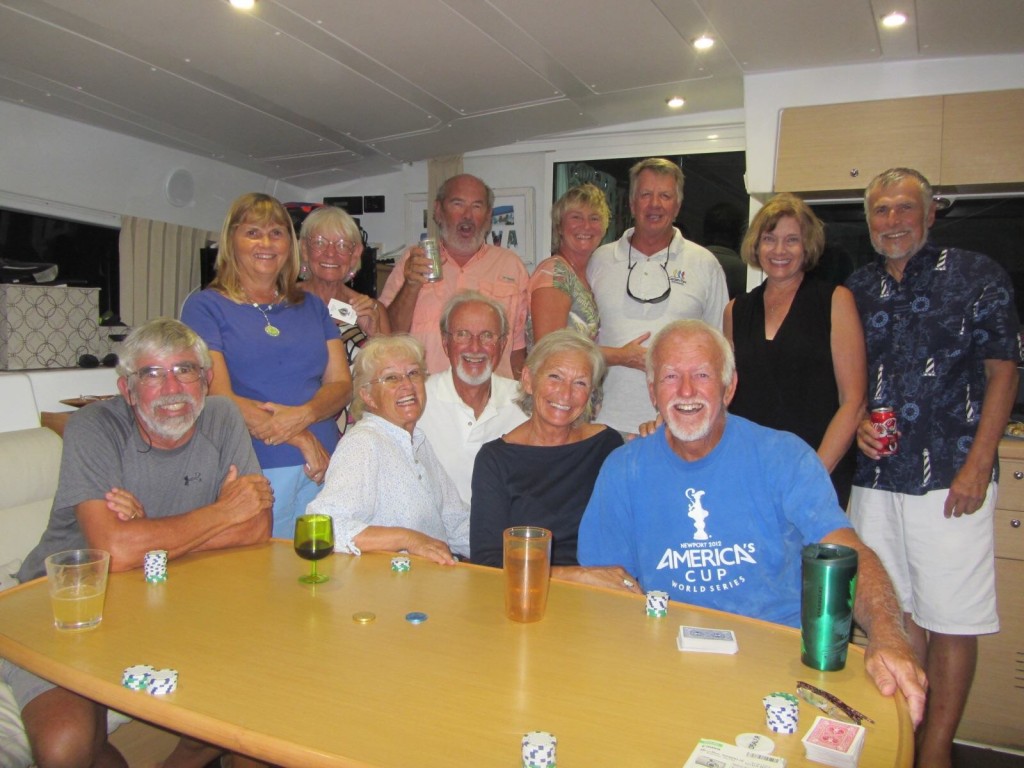 Several of our Hole 2 friends have been on adventures with us, and I know we wouldn’t have done them without their invitations. A few weeks ago we went to Mariah Cay, a long dinghy ride from where our boat is, with friends Jean and Art (MV Interlude) and their visiting friends. What a fantastic day we had eating our picnic lunches, swimming in the crystal clear turquoise water, floating with the current on a natural “Lazy River ride,” walking on the beautiful deserted beach, and of course talking. 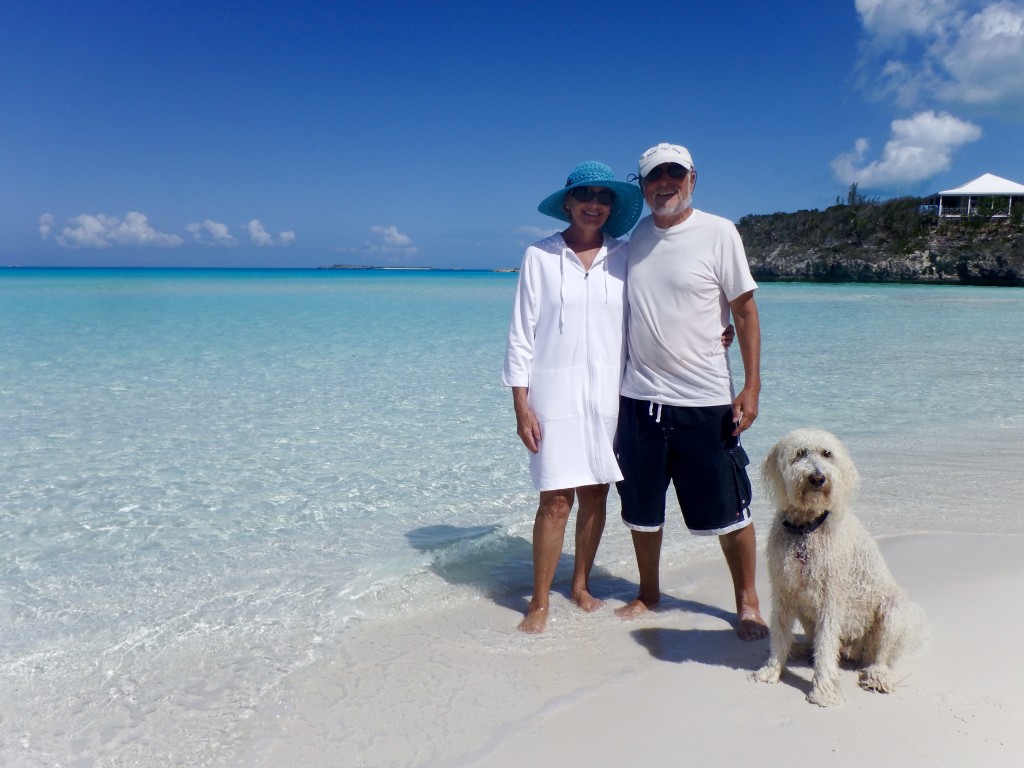 Another day, Christina and John (HB Oasis – that’s HouseBoat) invited us to go with them on their Carolina Skiff, about 18 ft long, for a day of snorkeling. We hadn’t been snorkeling in Elizabeth Harbour so we were thrilled to have the  chance to visit the coral gardens they knew well. Even Sailor got into the act, as he was unwilling to stay in the skiff alone and joined us in the water. After some excellent snorkeling, we explored a nearby cave. Next we motored to Santanas, a very popular restaurant south of us in Great Exuma. As we anchored the skiff, a dog we assume belongs to the owners of Santana’s swam out to greet Sailor. We had two delicious lobster tails for $14 and some conch with sides. A perfect Bahamian lunch. Next door we visited Mom’s Bakery and bought rum cake and coconut bread. Mom used to bring her baked goods to downtown Georgetown, parking near the Exuma Market, and sold her cakes and bread out of her car, but she is getting older and doesn’t make the trip now. She still gave us the hugs she is famous for, however. Santana’s was too far away for us to go in our 12 ft inflatable dinghy, so we really appreciated going with Christina and John. The underwater photos below are from Christina’s camera. 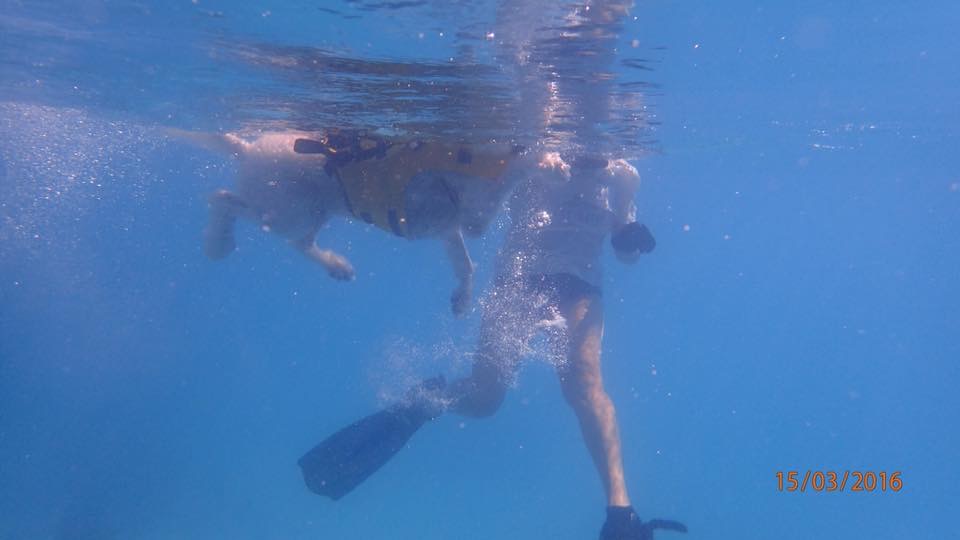 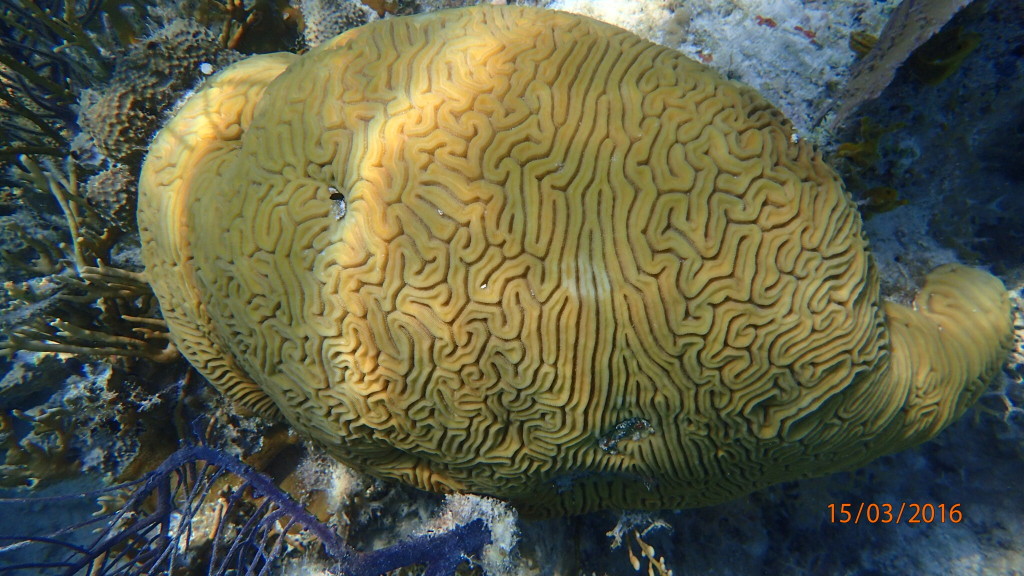 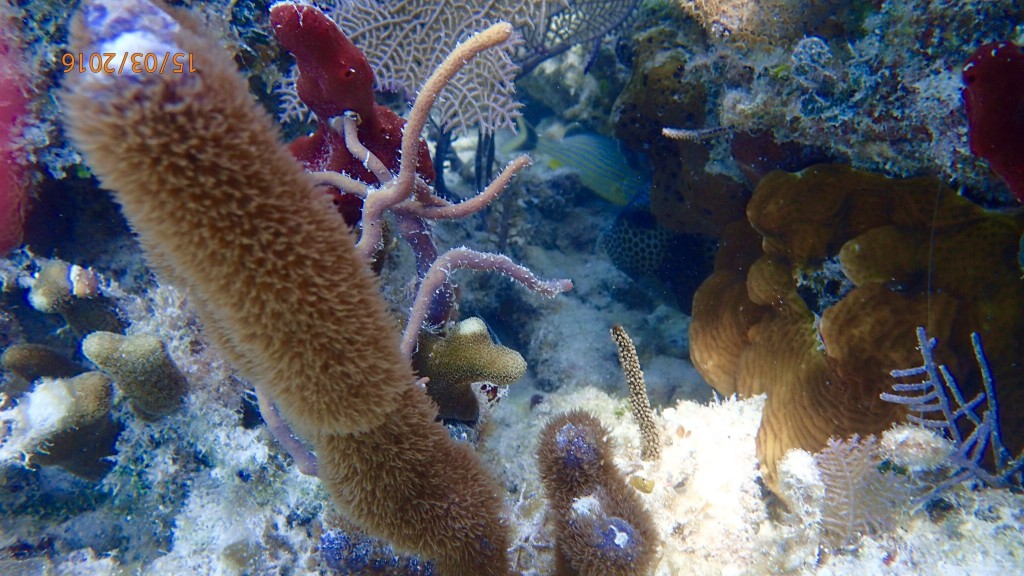 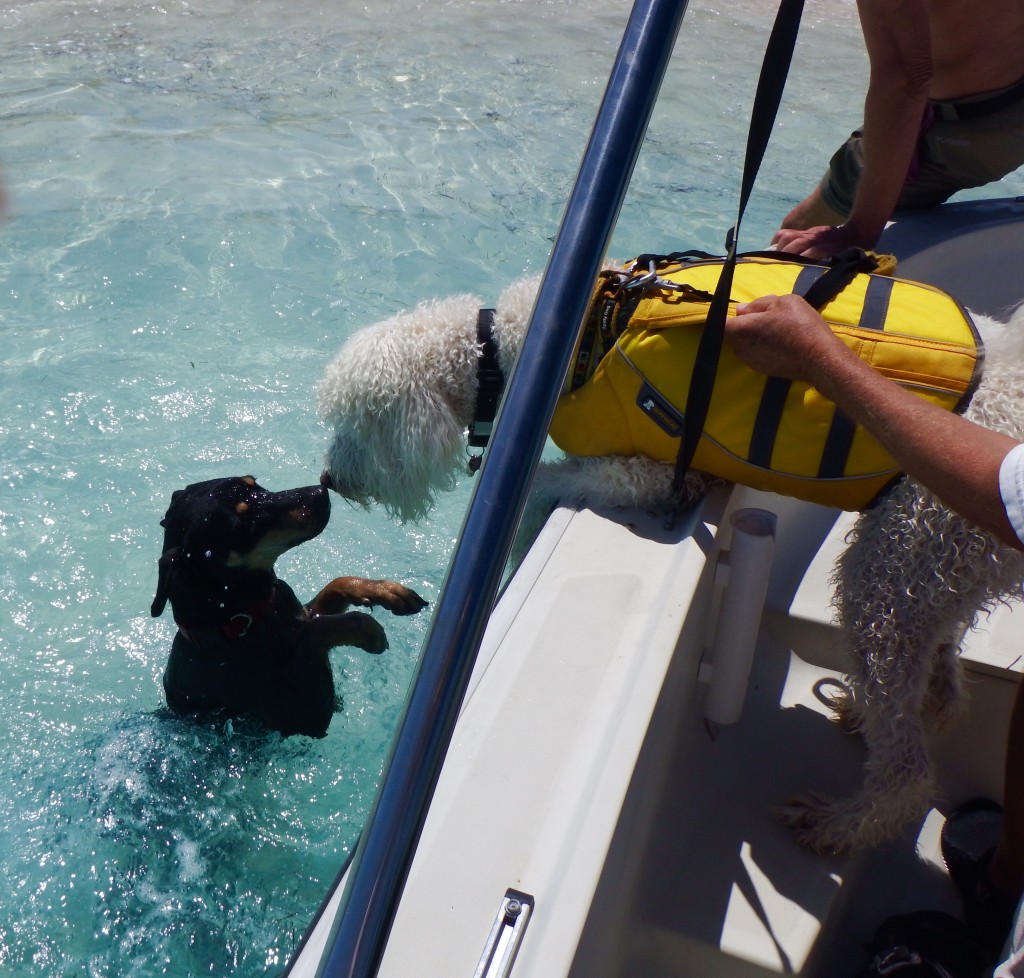 We left Georgetown as soon after sunrise as it was safe to go on Friday, April 8, after anchoring out the last night at the Monument anchorage in Elizabeth Harbour. The first part of the day we motorsailed on the Exuma Sound, part of the Atlantic Ocean, in water over 300 feet deep a mile offshore. We waited several days until the seas were calm, and we had a very smooth sail. Then we entered the Bahamas Bank through Galliot Cut and sailed in shallow water, about 14 feet deep, to Staniel Cay where we will wait for guests to arrive from Florida by plane in less than a week. The photos below begin with the sunrise over the Monument anchorage as we left Georgetown and end with the sunset at Big Majors anchorage near Staniel Cay. 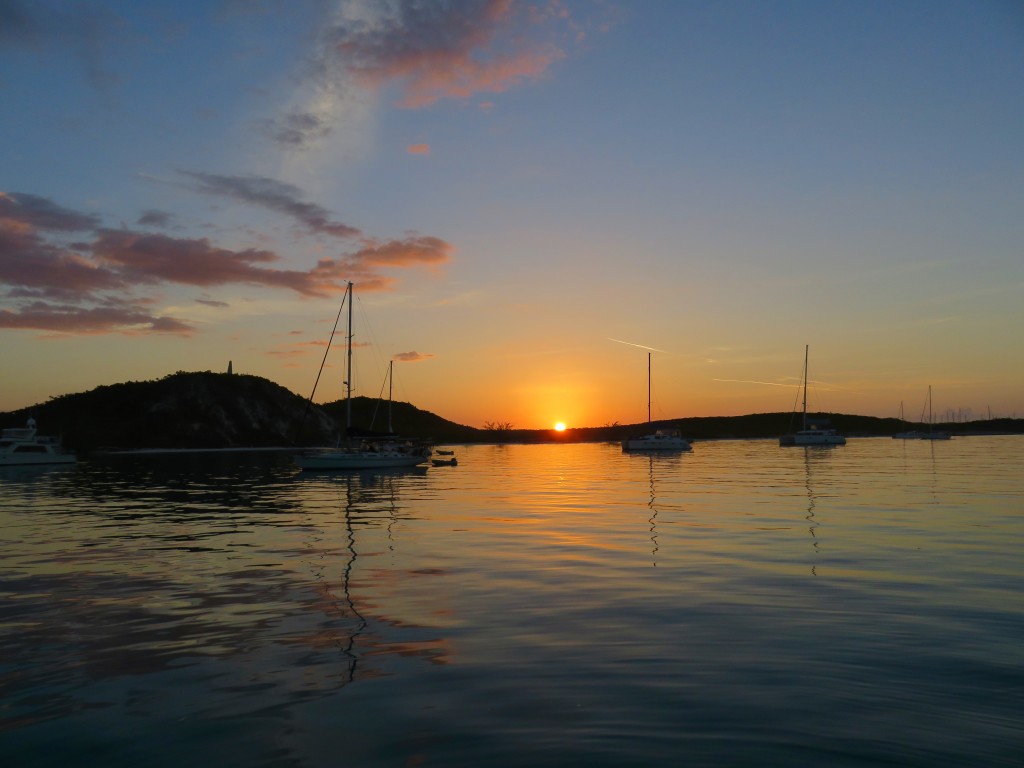 Sailor knew it was going to be a calm day at sea when he settled under the helm seat instead of running inside to the bed to hide from the big waves. He didn’t move from this spot for 8 1/2 hours until we arrived in Staniel Cay. 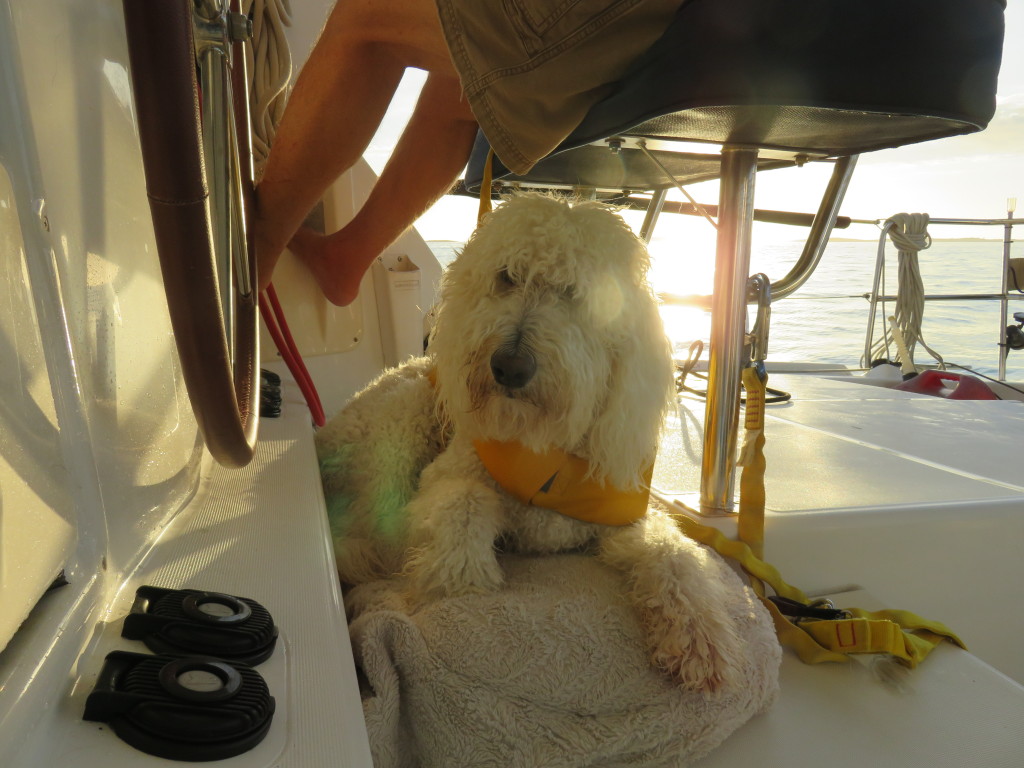 Here we are leaving the Exuma Sound at Galliot Cut and entering shallow water.Sometimes this cut is very rough, and today it slowed us down 3 kts since the tide was going out, but it was a smooth ride. 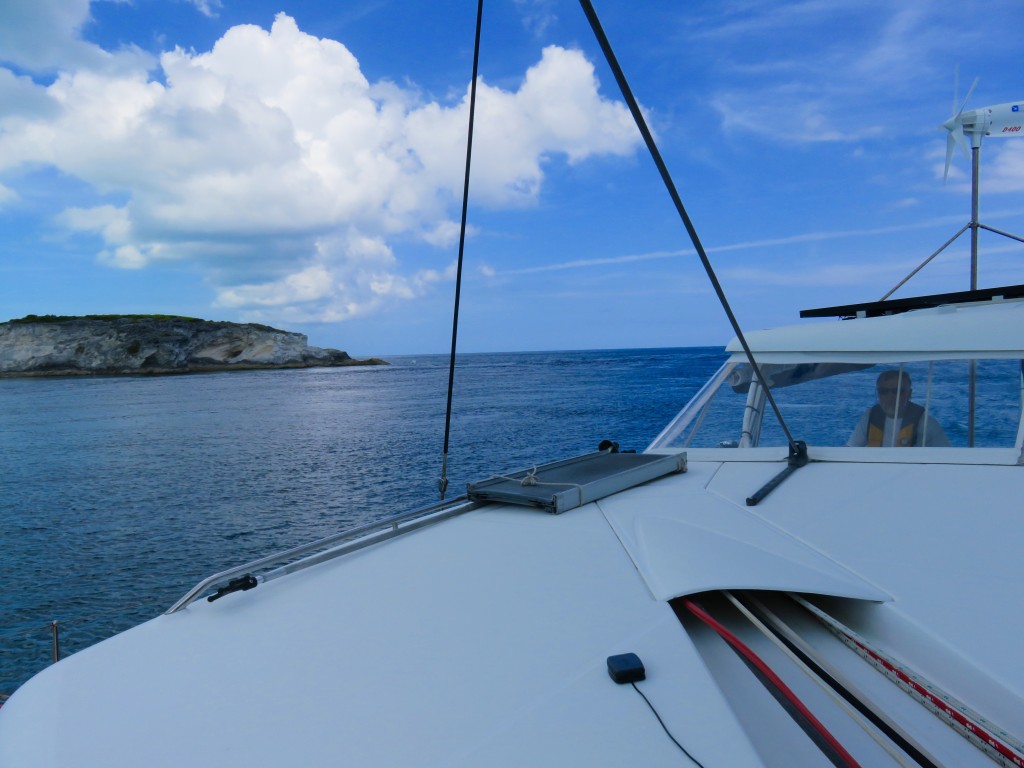 Inside the cut we were now sailing on the Bahamas Bank.

This is the sunset from our boat in Big Majors anchorage. 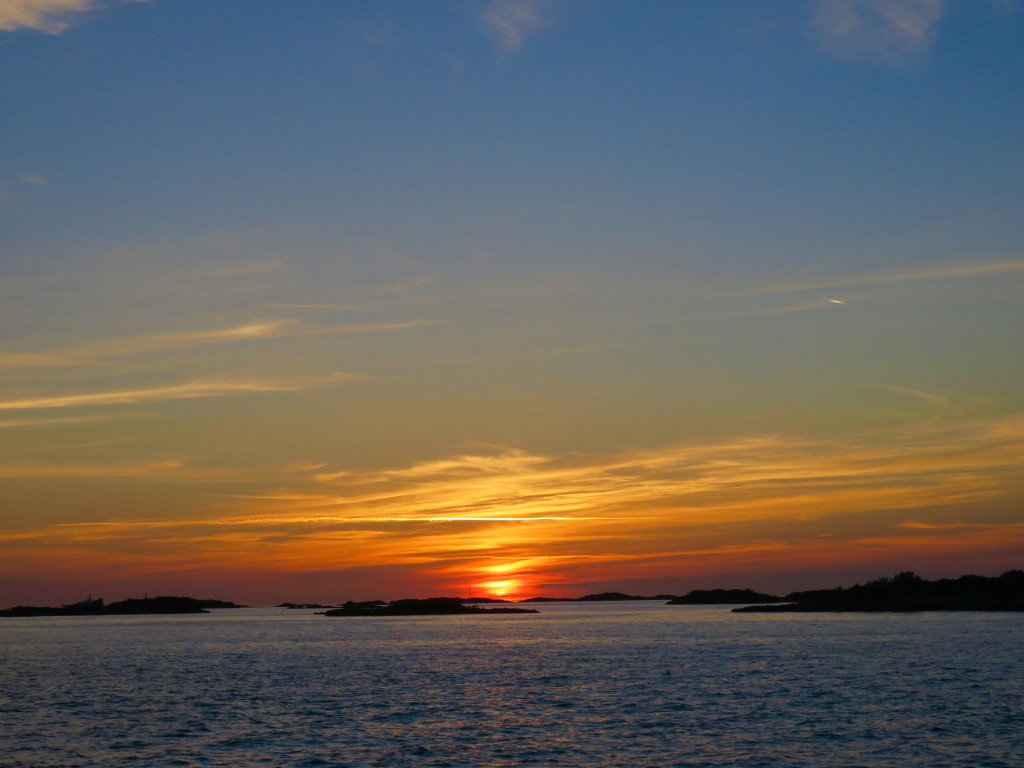