We left Dinner Key Marina on Sunday, December 16 at 0649 and arrived in Bimini at 1430. We had 3 to 6 foot swells on the port aft beam and it was an uncomfortable motorsail although we’ve had much worse Gulf Stream crossings. The first thing we had to do when we got to Bimini was check in with Bahamas Customs and Immigration. We filled out some paperwork and Mark took that, along with all of our other paperwork concerning us, the boat, and Sailor, in a taxi for a short ride to the airport. It costs $300 for our cruising permit. This allows us to stay in the Bahamas for eight months and the boat can be in Bahamian waters for 12 months.  However, Customs and Immigration officials never give cruisers more than six months, with the ability for us to extend it to eight months. Usually they only give cruisers three of four months. Only one time in seven visits to the Bahamas have we gotten six months and we have always checked in at Bimini.  In order to extend our cruising permit, we must be near a town with an Immigration official within a few days before it expires. We know we will be in Georgetown in three months so that is what we asked for this time. The last time we were in the Bahamas we asked for six months and were given four months. When it was about to expire we were in Spanish Wells where there isn’t an immigration office. We had to take a water taxi to Eleuthera and a land taxi to an immigration office to get the extension. Hopefully when we extend it in Georgetown the official will give us another three months. This does not always happen and we might need to extend it again in Spanish Wells. After Mark returned from the airport, he took down our yellow “quarantine” flag and raised the Bahamas courtesy flag. 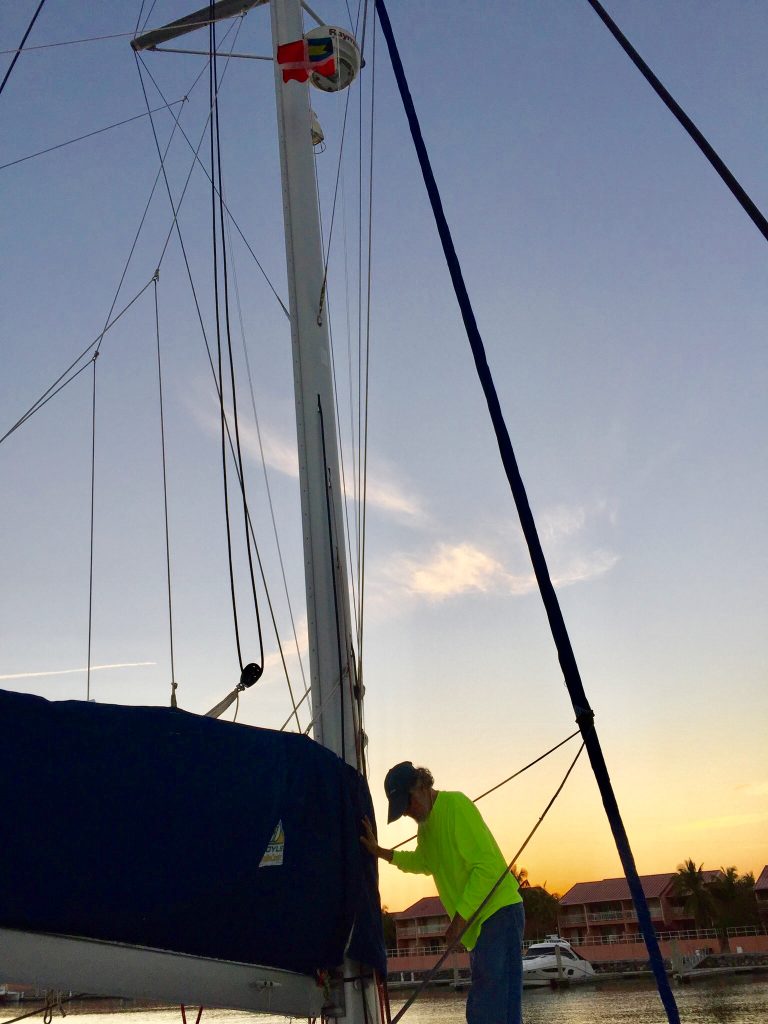 Our plan was to stay at Bimini Sands one night and leave the next morning for Great Harbour Cay in the Berries. We got up at 0400 and Mark took Sailor for a quick walk. He went to the beach and saw rough seas in the inlet and further out in the ocean.  We sail on the ocean for several miles before we reach the shallow Bahamas Bank. We decided to stay in Bimini and went back to bed. A very strong cold front was forecast to come through the Bahamas Thursday night and Friday so we needed to be in a safe place by then.  We could have gotten to the extremely protected marina in Great Harbour Cay the following day when the seas were calmer and many cruisers did go there to wait out the storm. We stayed in Bimini because the marina we are at, Bimini Sands Resort and Marina, is running a special of $1 a foot ($42 for us) a day or $100 a week for a slip. If you have a 100 foot yacht, it’s still $100 a week. Great Harbour Cay has a weekly price of $10 a foot, or $420 for us before a discount with our Active Captain account.  Since we had already spent much more money than planned on a marina in Ft. Lauderdale for two weeks and the mooring field in Miami for a month, plus the unexpected cost of replacing the jib furler, we decided to save about $300 and stay in Bimini. Oddly, even with the extremely good prices at Bimini Sands, only a few boats are here. Perhaps that is because Bimini Sands is not advertising their special prices. We didn’t know about it until we checked in. After the pictures below were taken several other boats did come in. We noticed the marinas in North Bimini were not full either, so most cruisers must have moved as far into the Bahamas as they could get before the predicted cold front arrives. 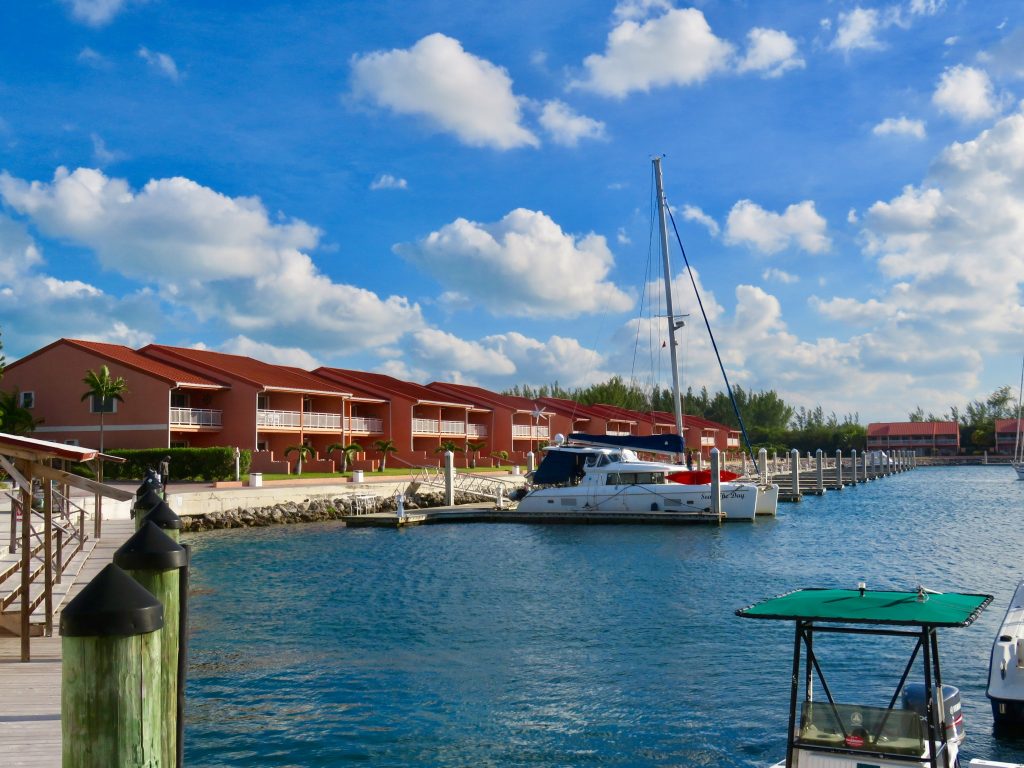 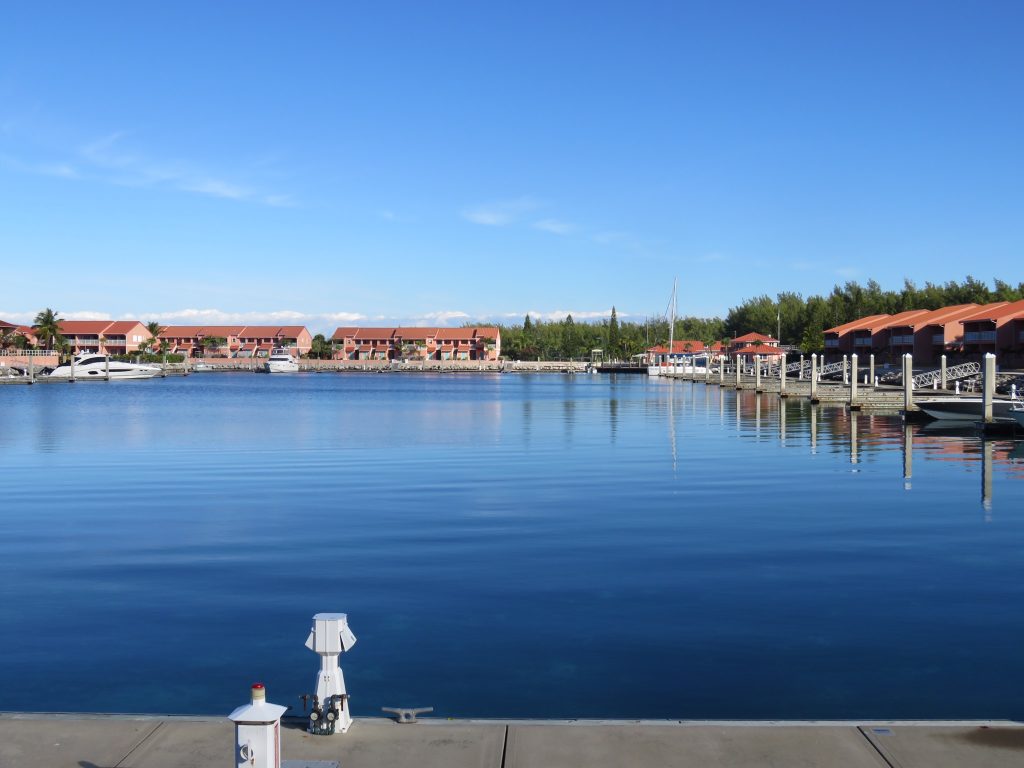 On Monday we took the water taxi a very short distance from South Bimini to North Bimini and walked to the Batelco (Bahamas Telephone Company) office on Kings Highway. After getting a new SIM card for our Bahamas smartphone, and some scratch off cards to add data and phone time to it as needed, we went back to South Bimini. For $29.95 we have 15 GB of data, unlimited phone calls within the Bahamas, and 1000 minutes to call the States or Canada for 15 days. The data rolls over if we don’t use it all.  Every year we have come to the Bahamas Batelco seems to have better deals. There are several other options in the Bahamas for unlimited data with different companies which we will probably investigate when we get to Georgetown. 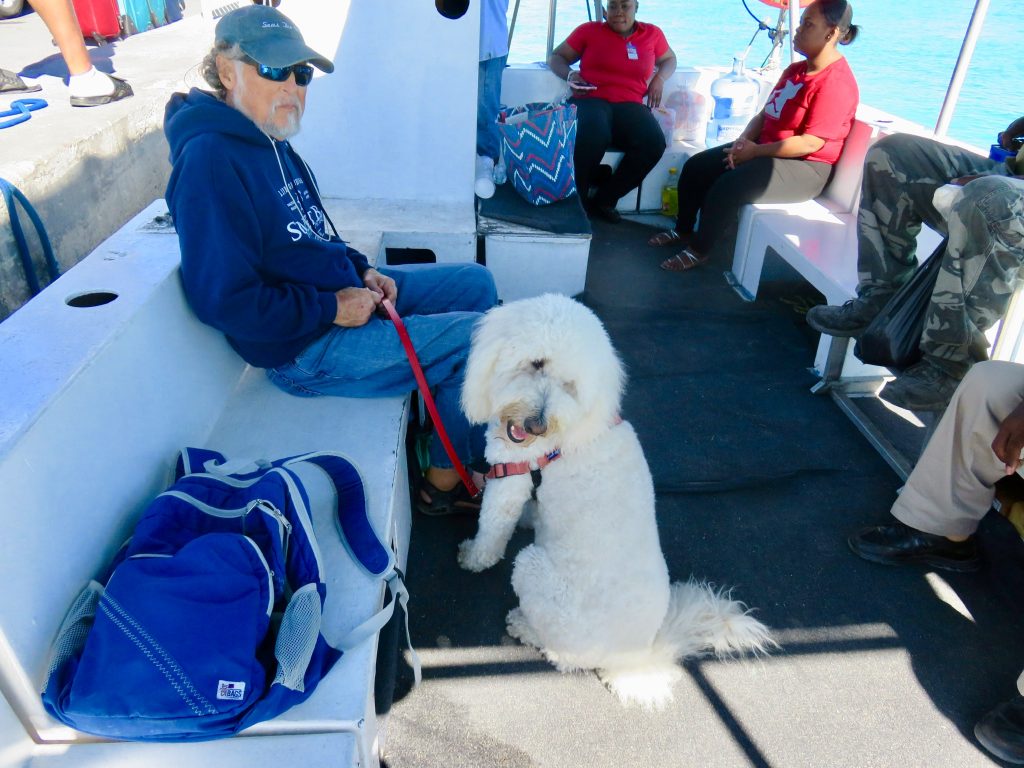 On Thursday, a prefrontal trough came through the Bahamas with high wind and torrential rain. We are tied up in a wide slip with numerous lines going from the boat’s cleats to both sides of the slip, so we hardly moved even when the wind picked up overnight with gusts over 40 kts. During the night the cold front arrived and all day Friday we had 30 to 35 kt sustained winds but the squalls had stopped. By Saturday morning the wind was down below 10 kts, and the high seas were slowly calming down. The photos below show waves crashing into the Bimini Sands Inlet on Friday. 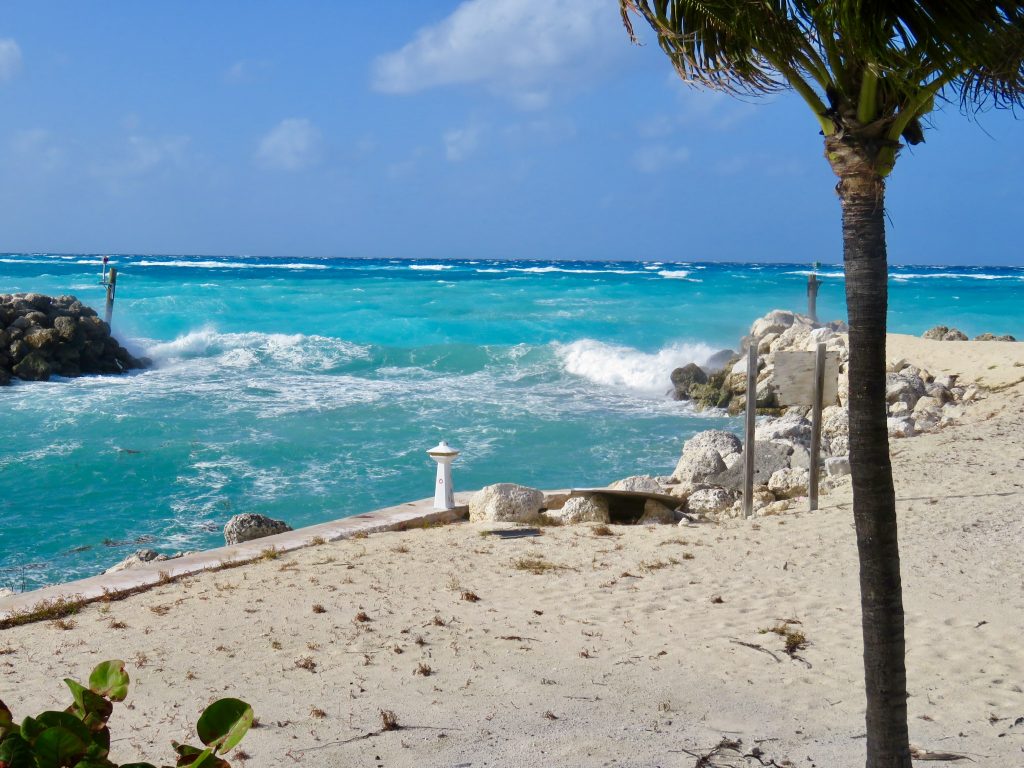 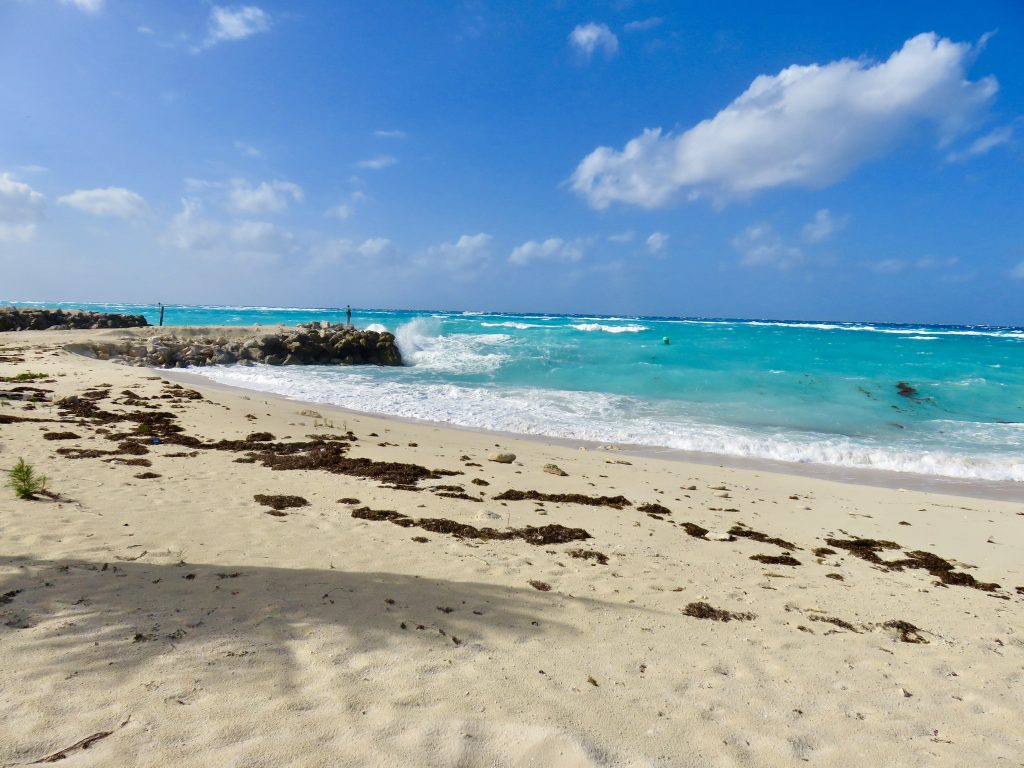 At this time of year in the Bahamas, there are never more than three or four days of safe traveling weather in a row. The forecast for the next three days is good for getting from Bimini to the Exumas so we will leave at about 0500 Sunday morning and sail to Chub Cay.  Both Chub Cay and Great Harbour Cay are in the Berries and we could go to either one on Sunday. However, Chub Cay is closer to Nassau and will make our second travel day quicker. We will arrive in Chub Cay around 6 pm and anchor near the shore. Since days are short, we will be leaving Bimini in the dark and anchoring at Chub in the dark, but the anchorage there is a wide open area and there are usually few boats in the anchorage area. We will leave the next morning, arrive in Nassau in the early afternoon, get fuel and motor through the harbor to Nassau Harbour Club where we have a reservation for Monday night, which is Christmas Eve.  Our Christmas present will be to arrive in the northern Exumas on Christmas Day. There will be several sections during the next two days where we will be on deep ocean water. Most of the sail from Bimini to Chub is on the Bahama Bank but the first part and the last part are on the ocean. From Chub Cay to Nassau we will be in deep water on the “Tongue of the Ocean” as soon as we leave the channel out of the anchorage at Chub Cay. The sail from Nassau to the Exumas is on the shallow Yellow Bank.

We are planning to reach the Exumas on Tuesday because on Wednesday another system with high winds enters the Bahamas. As weather allows, we will continue south on the Bank along the Exuma chain of islands and cays. Eventually we will exit the Bank  through a cut between islands out to the deep Exuma Sound and sail to Georgetown where we plan to stay until the end of March.