We finally left the dock at Sunset Bay yesterday.  On Sunday we drove to Ft. Lauderdale to pick up a new (used) chart plotter.  Mark spent the rest of Sunday getting all the electronics working and the chart plotter installed.  Monday morning we were ready to go.  The ideal time to leave would have been in the early afternoon when the tide was coming in and we would be pushed away from the dock.  Knowing I was nervous about the current forcing us too close to the other boats on the dock as we left, 8 or 9 dockmates were there at 8 am ready to help.  One friend even came aboard with a fender and boat hook.  As it turned out we didn’t need a lot of help. With me holding a fender at the very back of the boat at the bottom of the sugar scoop, Mark pivoted the front off the dock and when we were almost pointing straight out, we released the final line and headed between the dock and the mooring field to the fuel dock where we left Dave off, filled our tanks, pumped out the holding tank, and called the Old Roosevelt Bridge tender to ask him to raise it.  Usually this method isn’t enough, but thankfully this time it worked perfectly.  In the photo below you can see the first three bridges we had to go under starting with the Old Roosevelt bascule bridge, then the railroad bridge, then the 65 ft New Roosevelt Bridge. 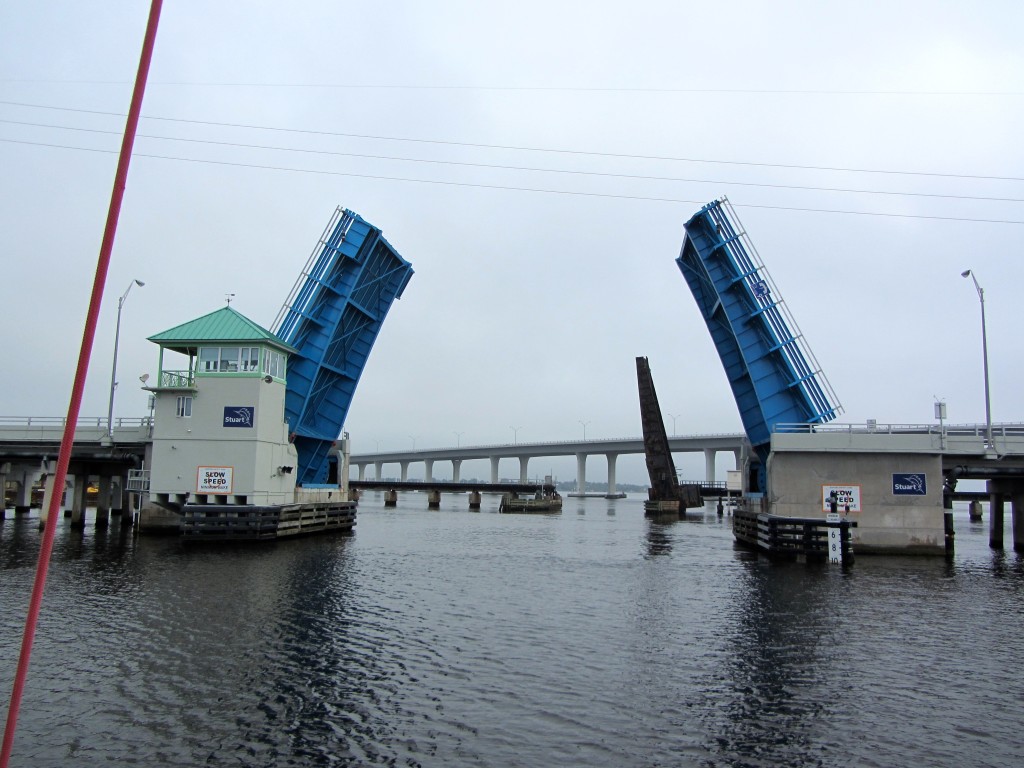 Our major concern was Sailor, since this was his maiden voyage.  He settled in nicely in Daisy’s old spot under at the helm next to Mark’s feet.  He stayed there most of the day until it became too hot.  Then he moved into the salon under the table.  I gave him a peanut butter stuffed bone that I had bought specifically to comfort him, since he can chew on it for hours. 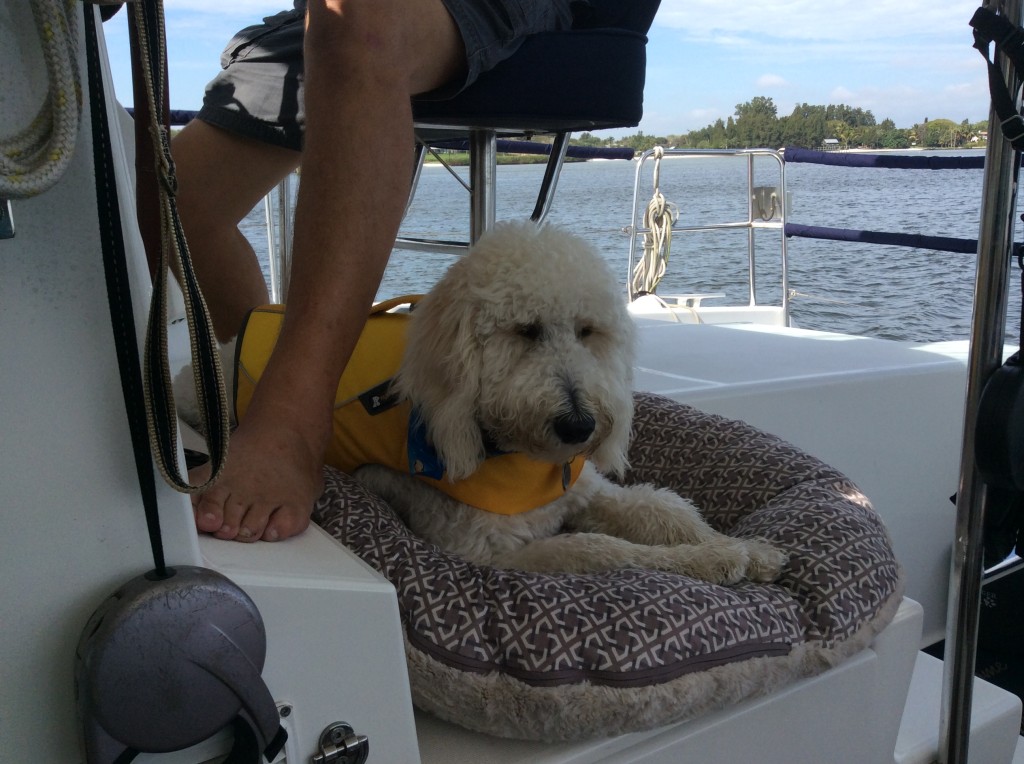 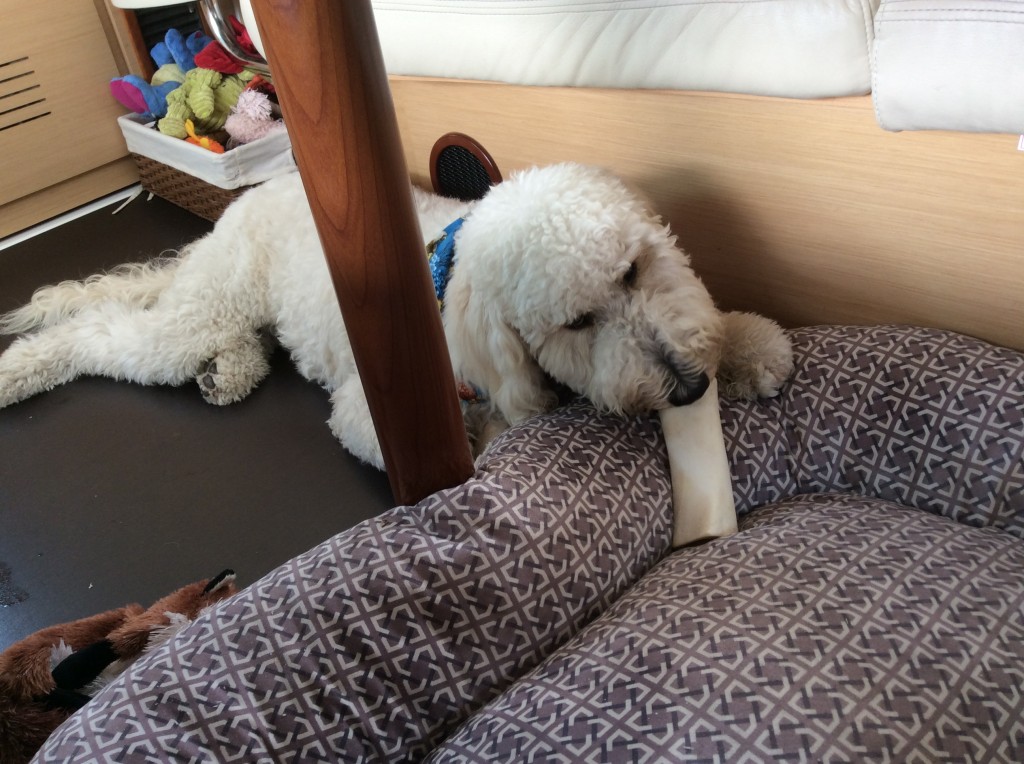 This is the only part of the trip where we are on the ICW (Intracoastal Waterway) and it is beautiful.  We pass through multiple areas lined with mansions sometimes with megayachts on their docks. 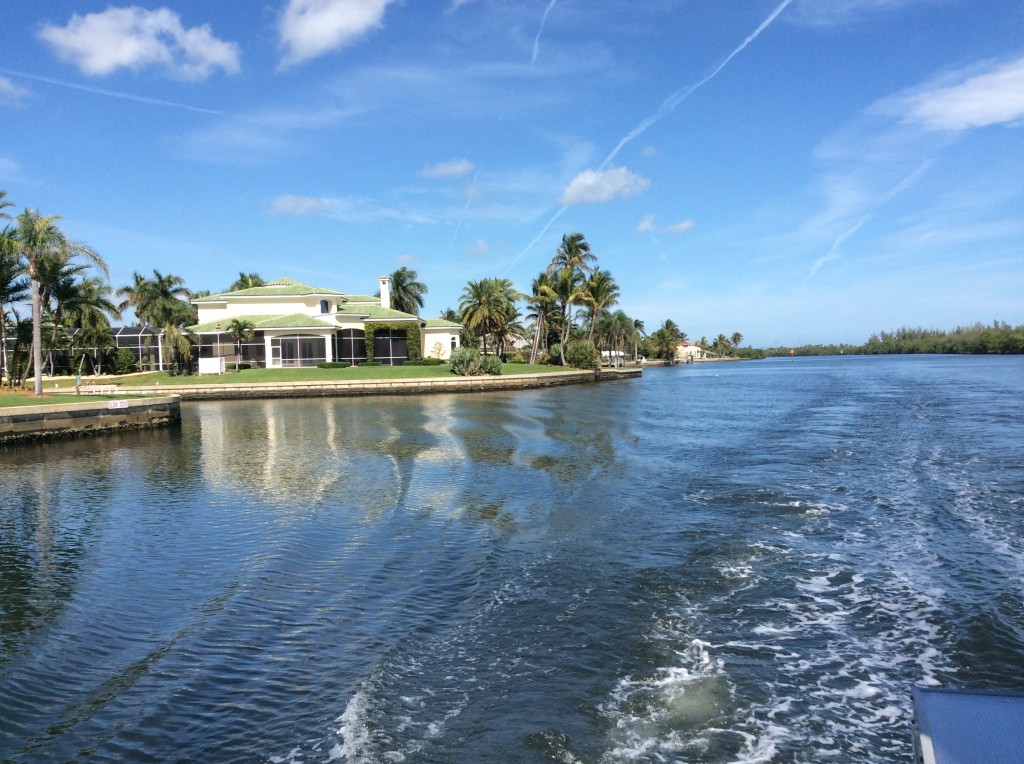 The ICW is usually much calmer than the ocean, however we encountered quite a few boats racing by us creating wakes that bounced us around.  One incident in particular was scary to the point of being dangerous.  We had to go under 12 bridges, only three being fixed 65 ft bridges.  Some opened on request and others were on a fixed half hour opening schedule.  After requesting an opening at one, the bridge started to raise and we pulled closer to go under it.  When boats are on both sides, usually you talk on the VHF radio to arrange who is going first.  The protocol is either the first one to arrive, or the one that is going against the current goes first. Smaller boats that don’t need the bridge raised are supposed to yield to the ones going under, especially sailboats who have to maneuver their mast away from the raised bridge.  As we were going under it we had to move to the other side of the channel to avoid hitting the raised bridge.  A small pontoon boat with a load of passengers sped right towards us and met us under the bridge, in the spot we needed to be in.  I ran to the front gesturing and yelling at them to get out of the way, pointing up at how close our mast was to the raised bridge.  They made some gesture which seemed to communicate, “You have plenty of room.”  Idiots!!  We squeaked through, lucky not to have hit our mast which would have been a disaster.  This was no doubt a group that lived nearby and traversed the ICW frequently.  Yet, the were clueless not just boating etiquette but vital safety rules.  The photo below is a bascule bridge we had gone under with no problems, a smaller sailboat coming after us.  You can see how a boat with a tall mast has to move to the open side to avoid the bridge.

We arrived at our anchorage in Lake Worth (Palm Beach) at 3:30 pm.  We prefer to stop at the north anchorage where there is easy access to a dinghy  dock next to Federal Highway with every store we could want, plus a Starbucks.  However, it takes about 1/2 hour to get from that anchorage to the one we stayed at which is right at the mouth of the inlet to the ocean.  After setting the anchor and getting settled in, we took the dinghy to Peanut Island.  This is a small island in Lake Worth next to our anchorage that is a beautiful park.  People snorkel there and you can walk on the beaches or wide trails.  Sailor had a blast because there was no one near us and we were able to let him off leash. As soon as he got out of the dinghy, for his first time going ashore in a dinghy, he raced up and down the beach and…..straight into the very calm water. I’m sure he didn’t realize it was water, never having been in it at a beach.  The shock on his face was priceless.  I didn’t capture that, but did get a photo of him while he got back to shore as fast as he could.  Below are a few photos from Peanut Island.

Not too sure about getting into this dinghy. 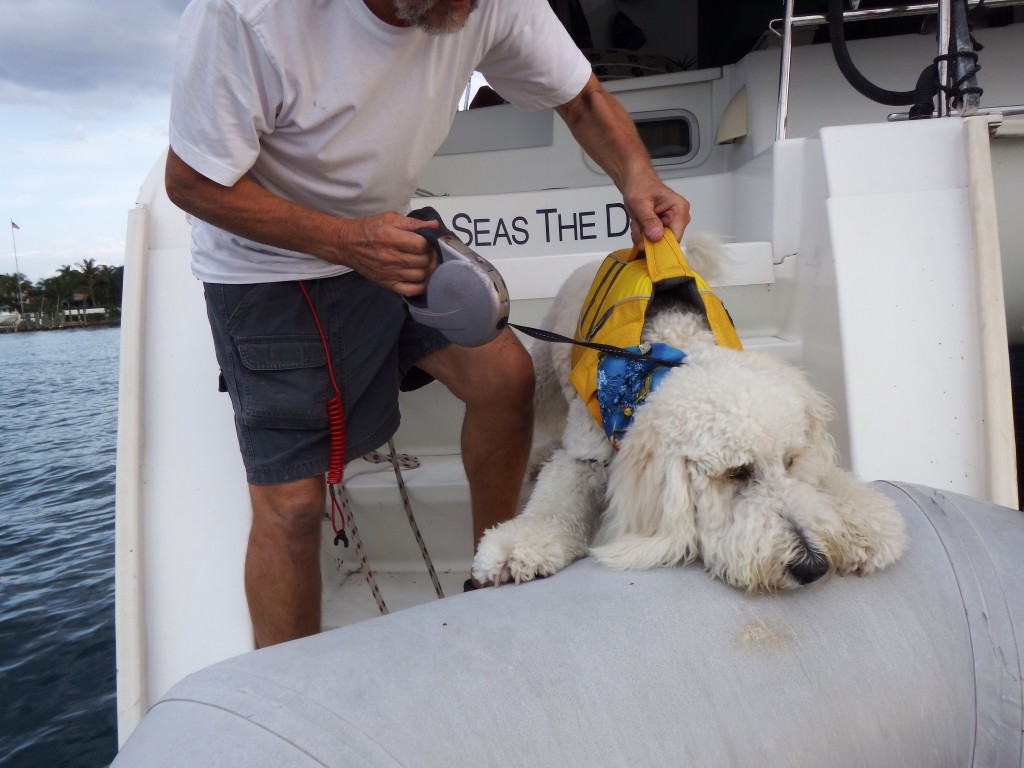 OK. Maybe this is kind of fun. 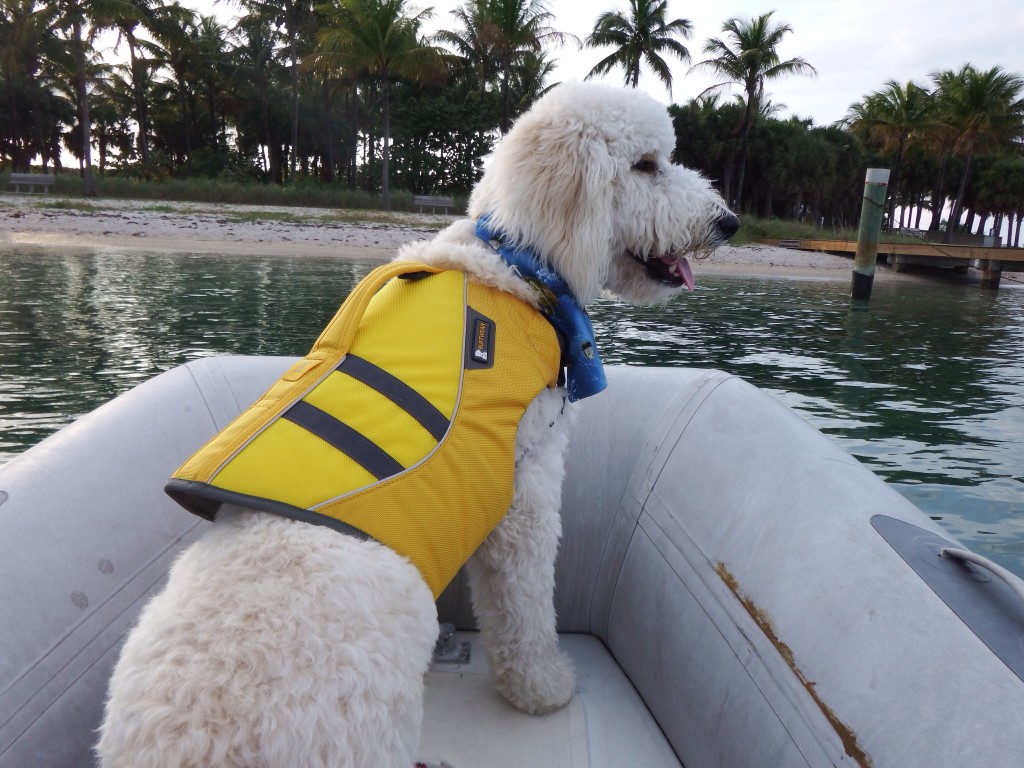 Getting out isn’t so easy either. 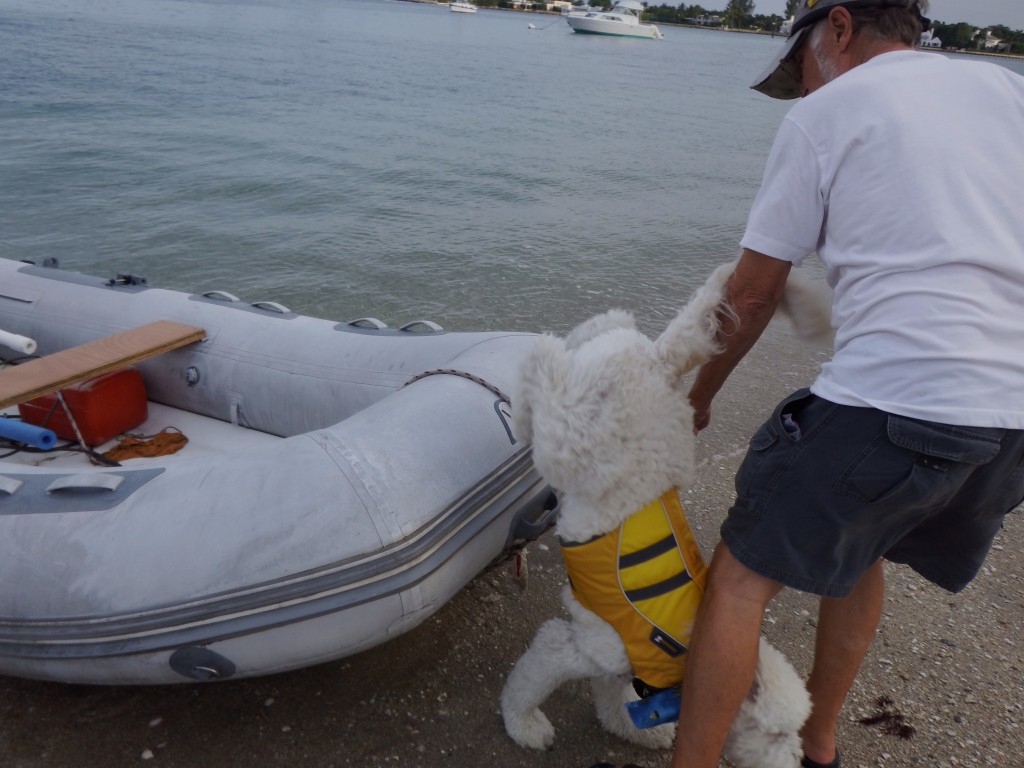 I think I’ll run on the beach. Hey!  What’s this wet stuff?  I better get out of here quick!

Peanut island in Lake Worth is a great place to walk, or for Sailor to experience his first swim. 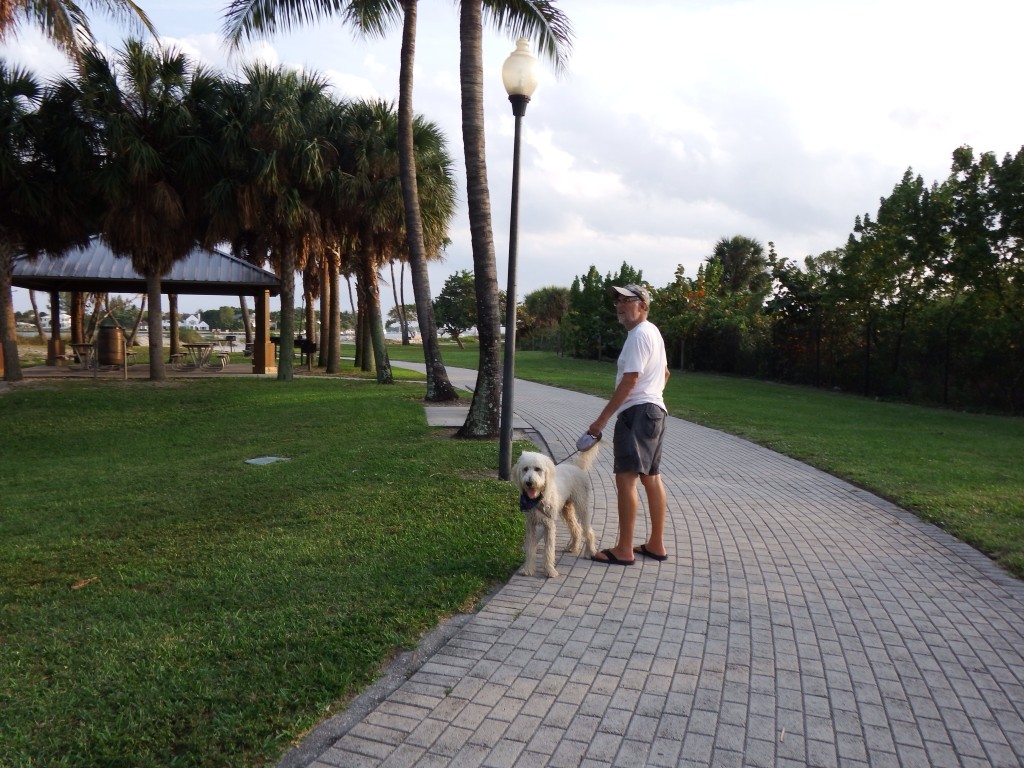 Next stop Ft. Lauderdale. Day One was fantastic!