On December 10, 2015, we arrived in Miami and picked up a mooring ball at Dinner Key Marina and Mooring Field.  Expecting it to be a few days’ wait before a favorable weather window to leave for the Bahamas, we settled in. When it was time to take Sailor ashore that afternoon Mark climbed into the dinghy and oops……..”Something on your boat is broken….you just don’t know it yet.” Before we left Stuart, Mark transferred the outboard motor from our old dinghy to our new one. While doing so, the motor tipped and some fuel got into it. Mark assumed he could fix it when we got to Miami. He couldn’t. It always happens when we are ready to leave that something important breaks. We ordered a new outboard motor and missed the window to cross to Bimini.

Three weeks later as we listened to Chris Parker’s morning weather report we confirmed that we could finally leave Miami and cross to the Bahamas. Chris Parker is the marine weatherman we subscribe to who sends us daily email marine forecasts and broadcasts a morning weather report starting at 0630 on computers and tablets (for subscribers) and SSB radio for subscribers and anyone else who wants to listen. Since we subscribe, i.e. pay him money, we can ask a question about our particular route. We did that on December 30 and he replied that Friday, January 1, would be the best day to cross the Gulf Stream to Bimini. We knew the weather would be comfortable for crossing the Gulf Stream on January 1, having listened to his forecasts the previous days and weeks and read his emails in which he recommends crossing weather windows as well as conditions in all parts of the Bahamas. What we learned from him on December 30 was that we would have to stay in Bimini for at least a week. We generally like to stay a night at Bimini, go to the Berries the next day, then Nassau, and then to the Exumas which is our destination for most of our winter/spring cruise. We can make it to the Berries on Saturday, but Sunday’s weather is not good for getting to Nassau. In fact, a gale force weather system is arriving in the Bahamas on Sunday and Chris Parker advised no travel for anyone from Bimini to the Exumas until at least Friday, January 8.

While in Miami we made good use of the time. Each day Sailor got to go to a fantastic dog park in Coconut Grove. It has astroturf instead of grass and the walkways are recycled tires, so even when it rains there is no mud. On the short walk to the park we would stop at Starbucks. Several blocks past the dog park there is a Home Depot and also a very nice IGA store named Milans. We did some additional provisioning there, mostly for fresh fruits and vegetables since our pantry shelves on Seas the Day have enough food to open a store of our own. We also did some shopping at Home Depot and of course West Marine, also within walking distance. 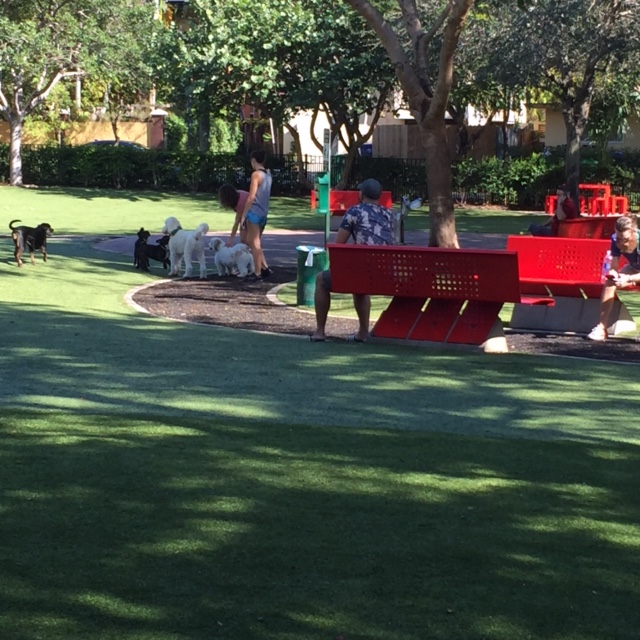 Unfortunately for the entire three weeks we were on mooring ball 157, the weather was very windy which made the water in Key Biscayne where the mooring field is located extremely  rough. Some days the large water taxi shuttle couldn’t come out to pick up people who didn’t want to go ashore in their own dinghies. This was a problem for us because for the first week we were there we had no dinghy motor. Even on a calm day, it would be a long row into the marina but impossible with the waves crashing through the mooring field. We got accustomed to rocking and rolling on the boat. Frequently we heard loud noises as waves pounded the hulls, sounding almost like we had been hit by another boat or large floating object. Sailor was particularly upset and wanted to spend almost all of the time while on the boat in a bed with one of us next to him. We read numerous books on our Kindles while we took turns in bed with Sailor. There was not a break in these weather conditions the entire time we were there. Once we got our new dinghy motor, we stopped using the water taxi and got used to getting wet going ashore and coming back to the boat. It was easier than waiting for the taxi which runs on the hour and sometimes cancels pickups midday or starts late due to the wind and water  conditions. One time Mark and Sailor got caught ashore when that happened and had to pay someone from a kayak rental company at the marina to take them back to the boat. 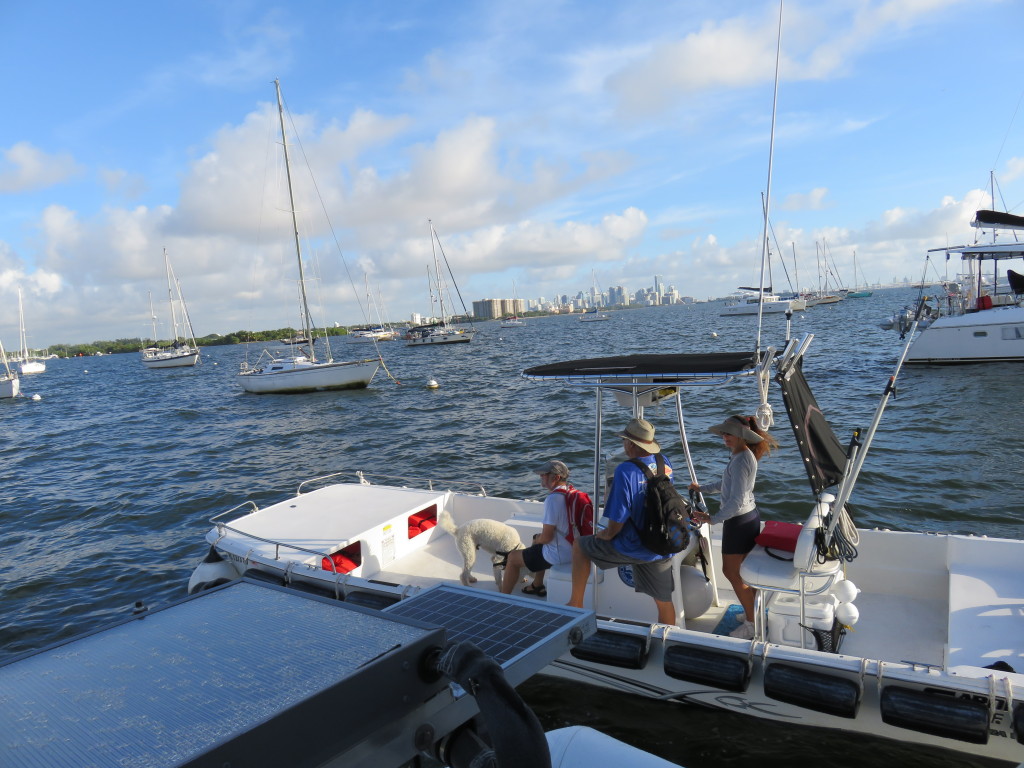 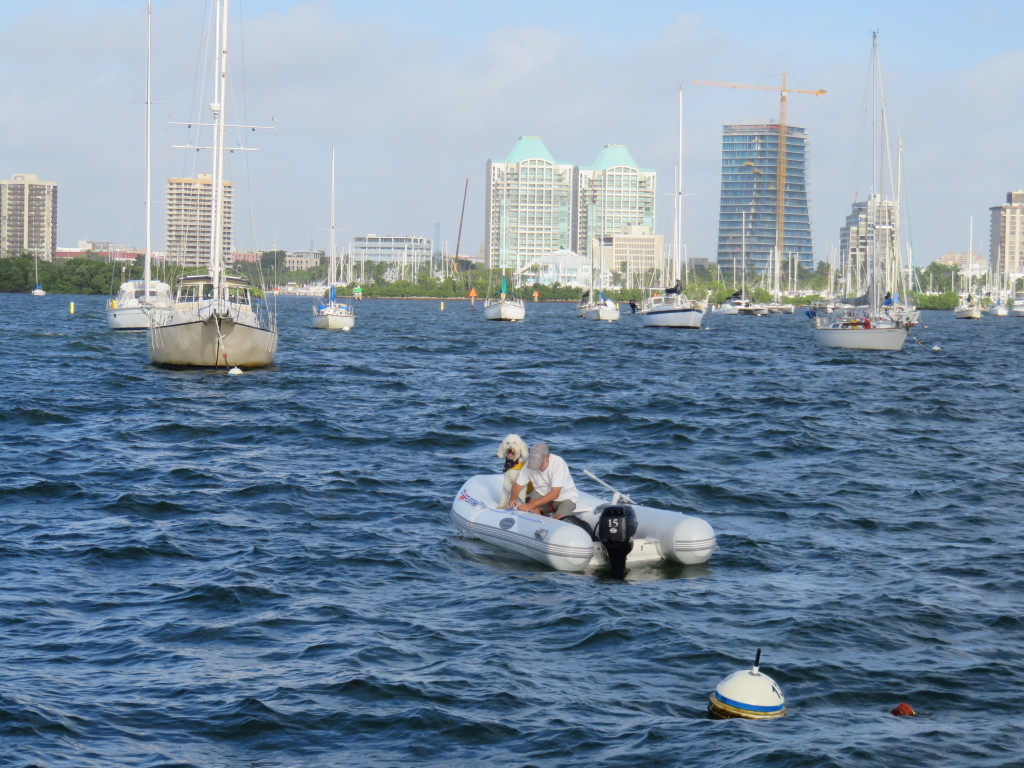 All was going well while we waited for good crossing weather until three days before we were going to leave. I went into the freezer, which is full of six months of frozen food, and noticed that some of the food was thawing! A quick check confirmed that indeed the freezer temperature was going down. We transferred most of the food into several large insulated  cooler bags we use for shopping and also into a large cooler. We moved the meat into the small freezers in our two refrigerators and put some of the food in the refrigerator sections. Since this happened in the early afternoon, we were able to purchase large bags of ice for each cooler and put several bags in the freezer where we left some food thus keeping everything cold overnight. Our freezer is made by Vitrifrigo and luckily for us their headquarters are an hour away in Ft. Lauderdale. They gave us the phone numbers of three repairmen we could call and we were able to get someone out to the boat the next morning at 10 am. They didn’t even make us come to the dock, but rode out in our dinghy with their tools. The two repairmen who came checked everything and couldn’t find a problem until they discovered a great deal of dust where Mark hadn’t been able to reach when he cleaned it before we left Stuart. With their industrial strength blower, it all came out and the freezer temperature dropped immediately. Luckily cleaning people don’t charge $140 to come out to dust one item. For us, it was worth every penny to save many hundreds of dollars worth of frozen food.

With the freezer working, we hoped that was the end of the problems. On a boat, the repairs and maintenance are constant. Over the past few months we have replaced the dinghy, the outboard motor for the dinghy, the two trampolines on the foredeck, two of the four air conditioning units, the water maker pump, the two small seats at the front of the hulls on the foredeck (originally made of wood for some stupid reason and obviously were doomed to rot), the chart plotter, the radar unit, and numerous other small items. Because of these major expenses we didn’t get the one item we were determined to buy after our freezer went out for a day last winter in Georgetown, Bahamas, and we needed to store the frozen food. A neighbor in the Hole 2 mooring field loaned us their Engel 12V freezer which can also be used as a refrigerator with a different setting. That time the problem was caused because ice had formed over a thermostat and once thawed all was well. We could have used an Engel this time, but it remains in the Amazon.com cart where it is “saved for later.” Since it is about $900 it will be there for awhile.

While it seems like we might have had a miserable time in Miami, we didn’t. We never expect to get there and leave immediately and having rough water and repairs are all part of cruising. Below are two photos from the deck of Seas the Day. The first was on Christmas night with a full moon above Biscayne Bay. The second is our boat under one of many beautiful sunsets, taken by our boat buddies on the next mooring ball, Renaissance II. 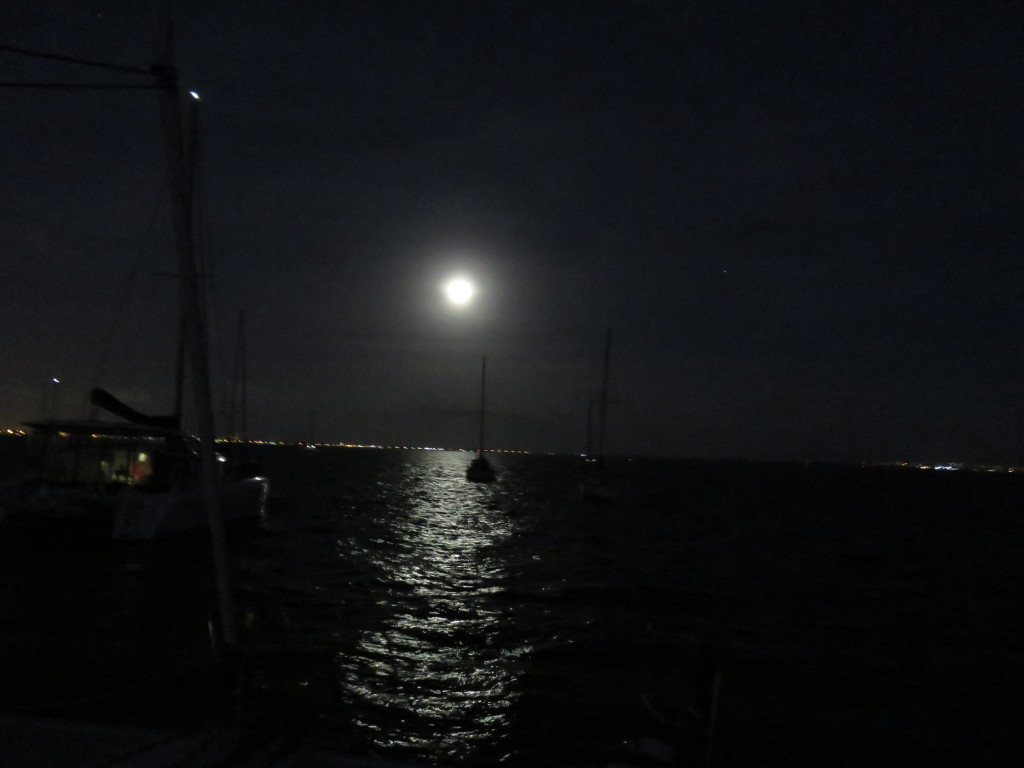 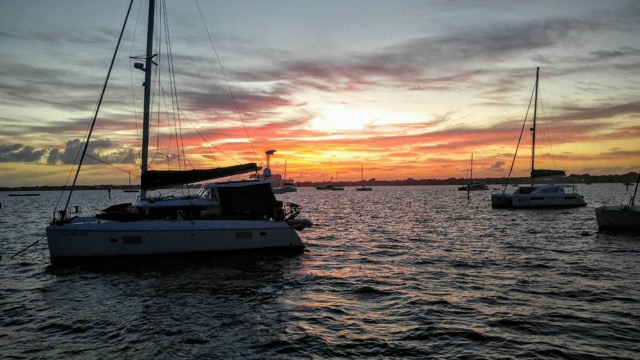 After one last trip to Milan’s for fresh food, another to the nearby Fresh Market for their homemade cookies, a visit to the marina laundry, a stop at the fuel dock to top off the tanks, a last time at Blanche Dog Park for Sailor, followed by a bath at a hose at the marina, and one last frappuccino, we settled down to get a good night’s sleep before leaving for Bimini on January 1, 2016, hoping the midnight fireworks wouldn’t be too loud. They weren’t and at daylight January 1, we released mooring ball 157 and headed east.

Occasionally the Moss Creek Goldendoodles who live in the same area get together for a “romp.”  Today we went to the Delray Beach Dog Park, about an hour south of Stuart, to meet with nine other Moss Creek Goldendoodles, aka McDoodles, and a few non-doodle brothers and sisters.  These were the romping doodles:  Smoochie, Harlii, Barkley, Cadee, Cassie, Ozzy, Henry, LoLa, Sailor, and Sunnie.

This was Sailor’s first romp and he had a great time, although he started out white and ended up black and white, covered with dog saliva, mulch, and dirt.  It is a huge dog park and of course we were in the large dog area, with Sailor being the only puppy.  Sailor is fearless and spent a good part of his time rolling in the mulch with other young playful dogs, some doodles and some not.  Most of the doodles tended to stay near their people, but a few were enjoying the freedom of running off-leash.  After several hours, we drove a few miles to the Village Tavern Restaurant in Boynton Beach for lunch.  Below are some pictures from our first romp. At the bottom of this post is a slide show with more photos. 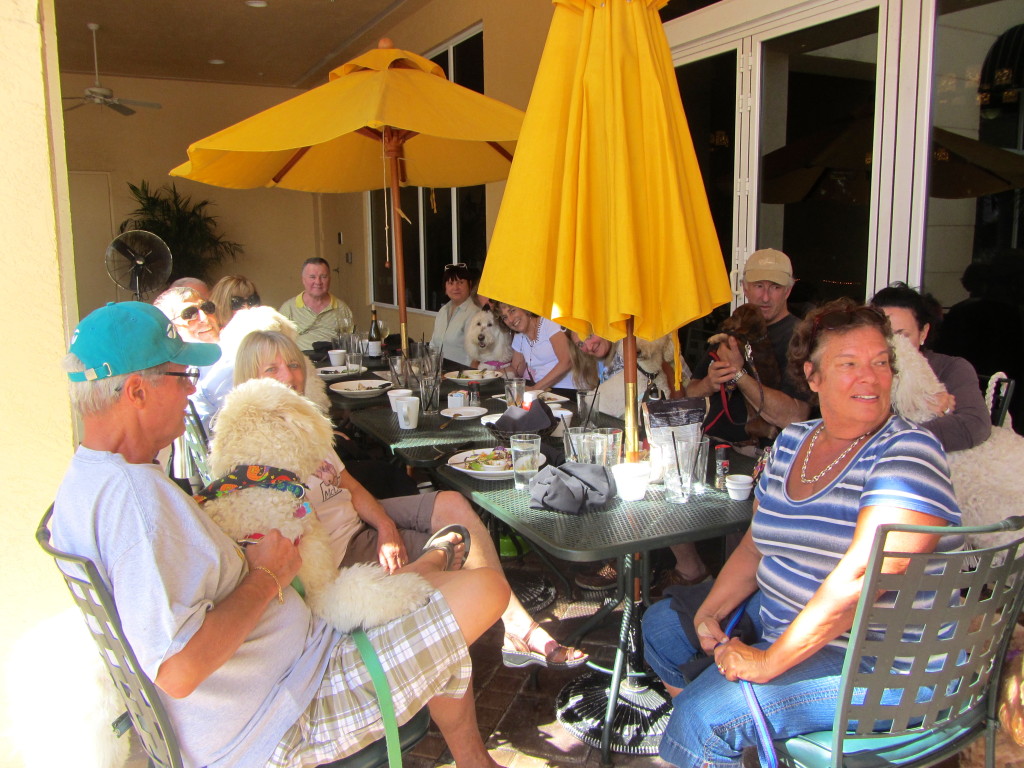 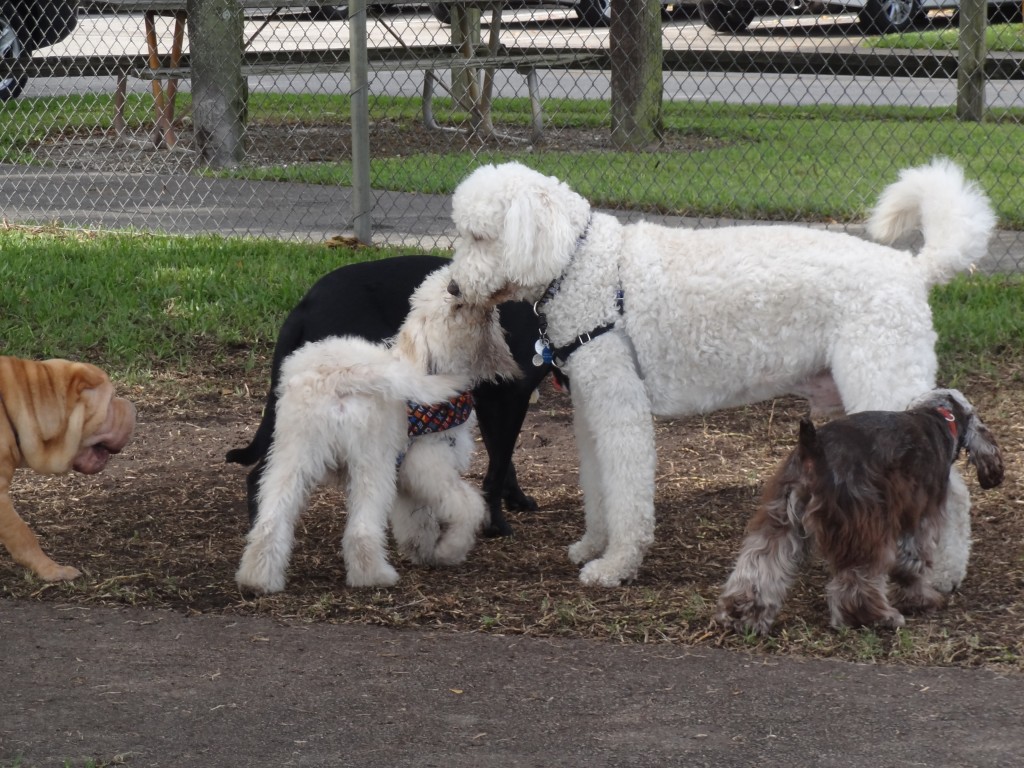 Someone smaller than me! 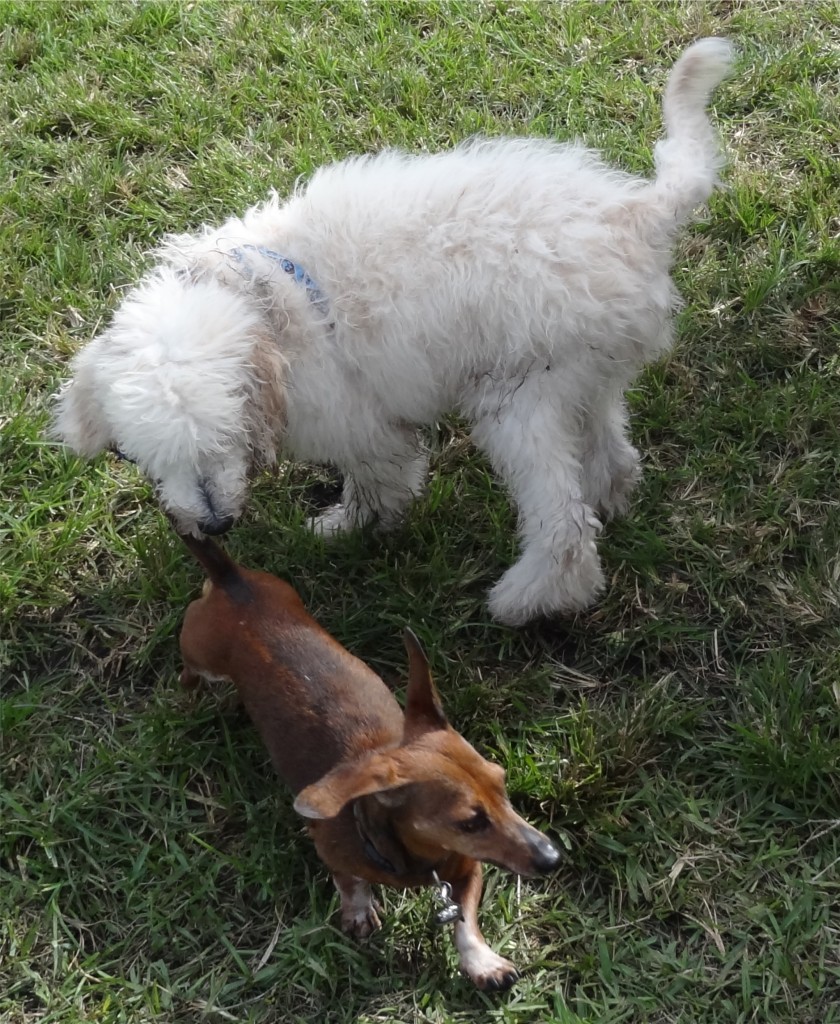 Taking a break after rolling in the dirt 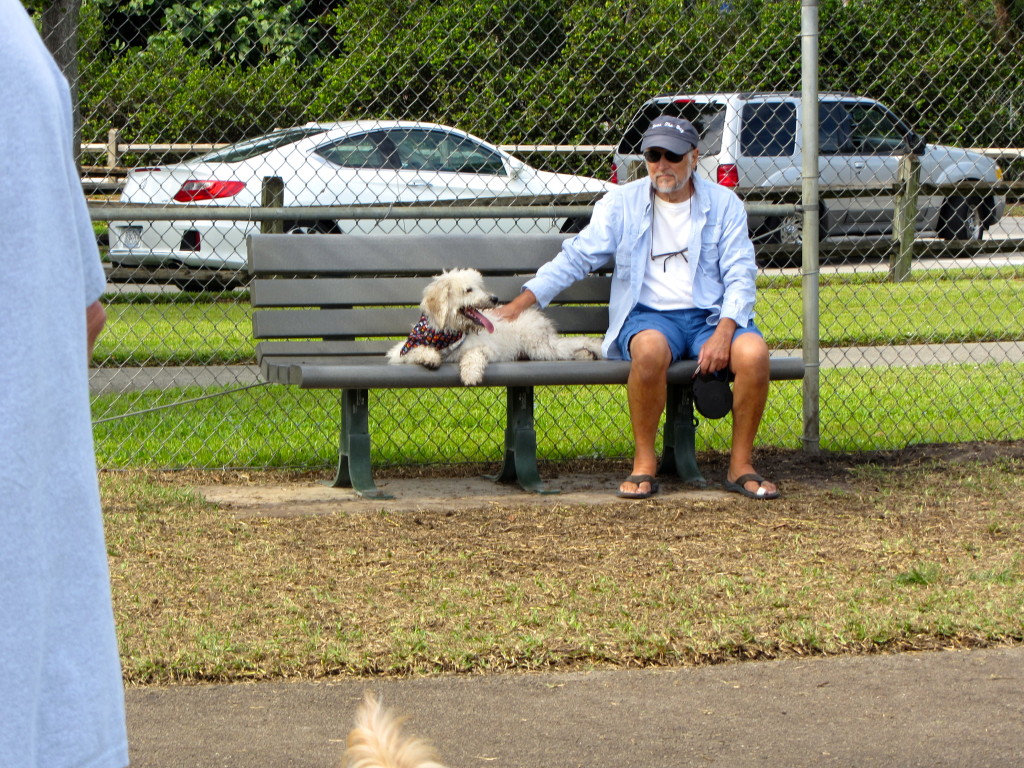 This is why he got so dirty……but boy was it fun! 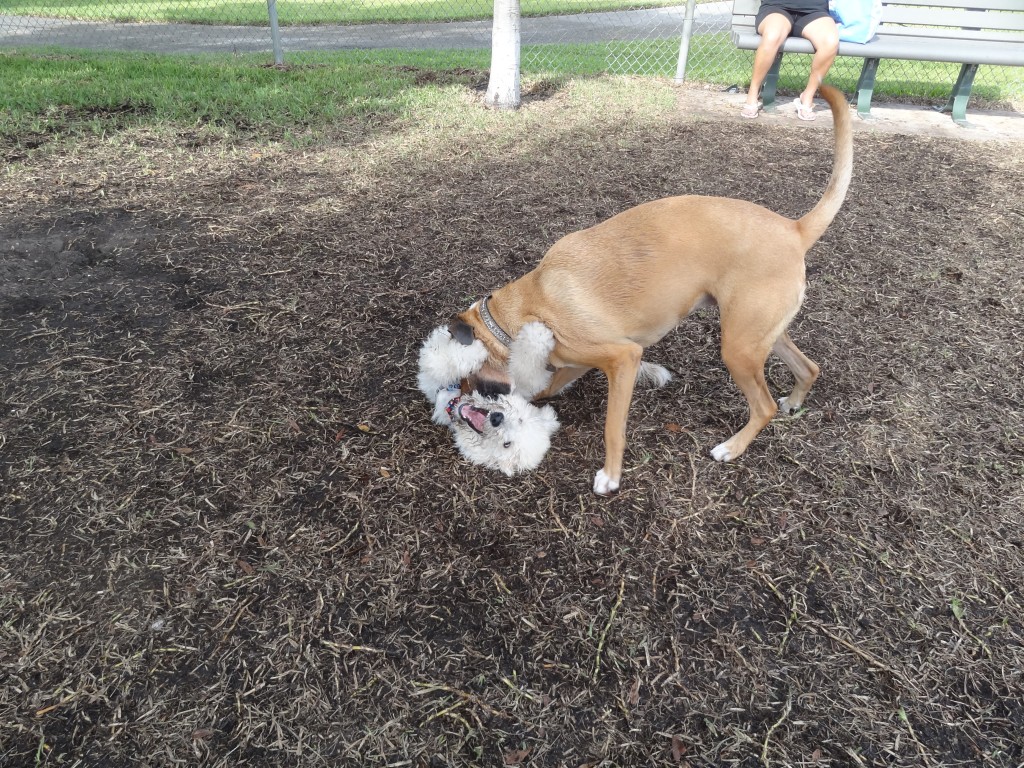 Why is Sailor the only dirty one? 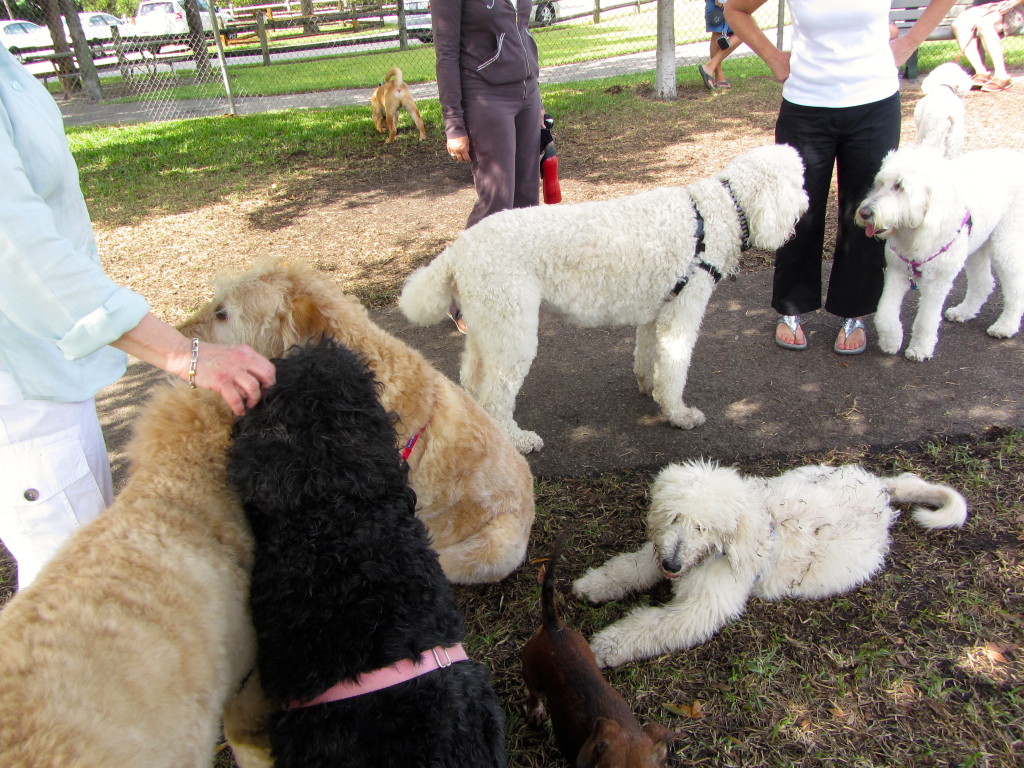 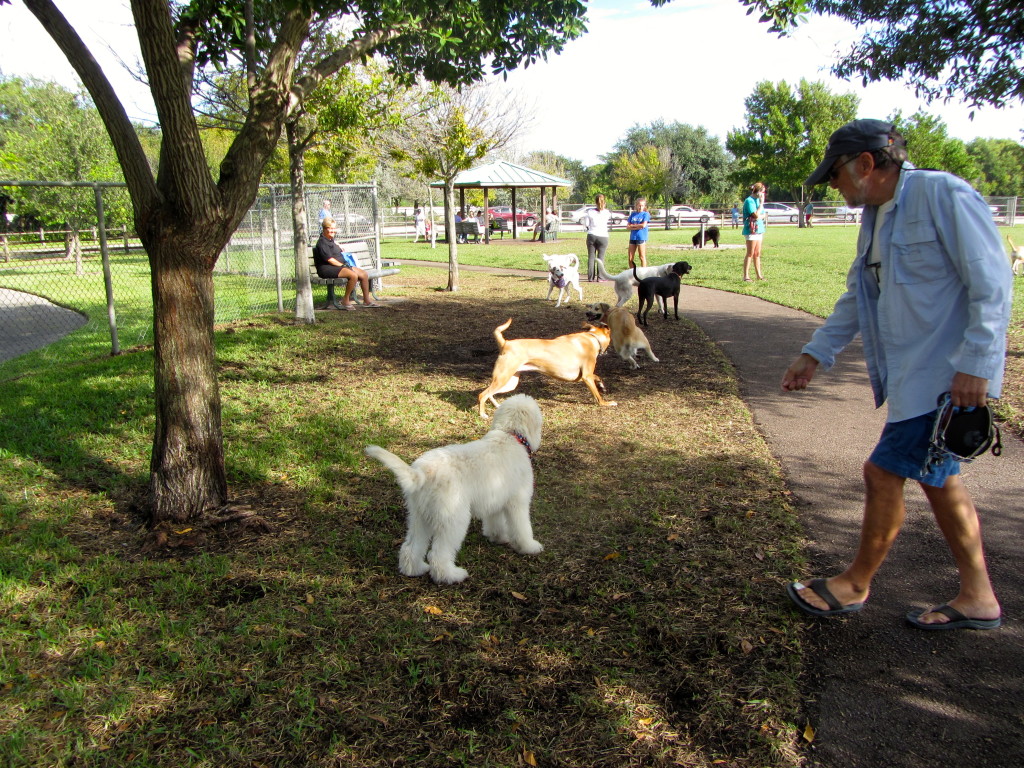 Eventually, Sailor found a bench to sit on so he could rest and watch the other dogs “romping.”

Slideshow pictures below.  If they don’t change automatically, use arrows on the side to move manually. 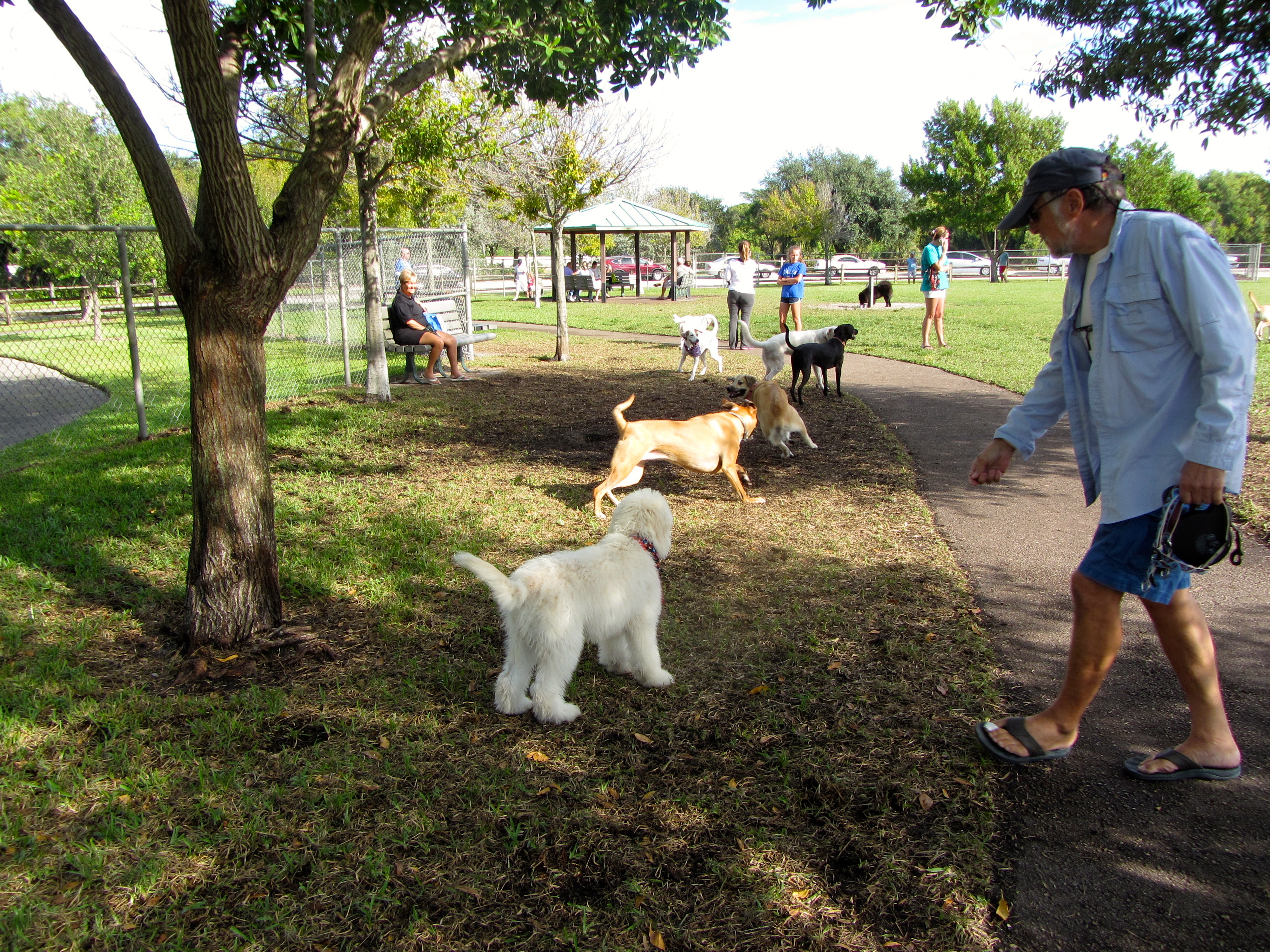 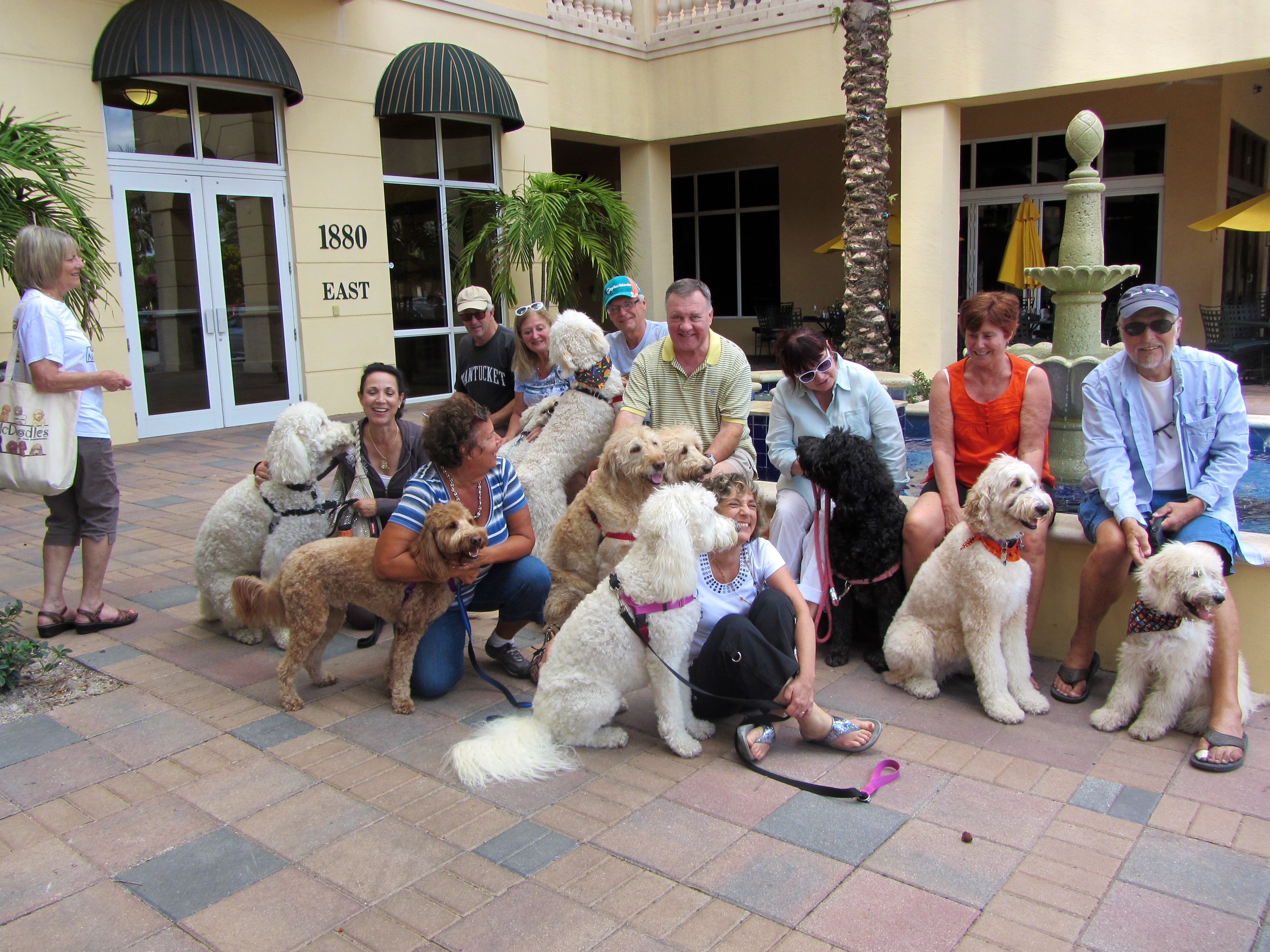 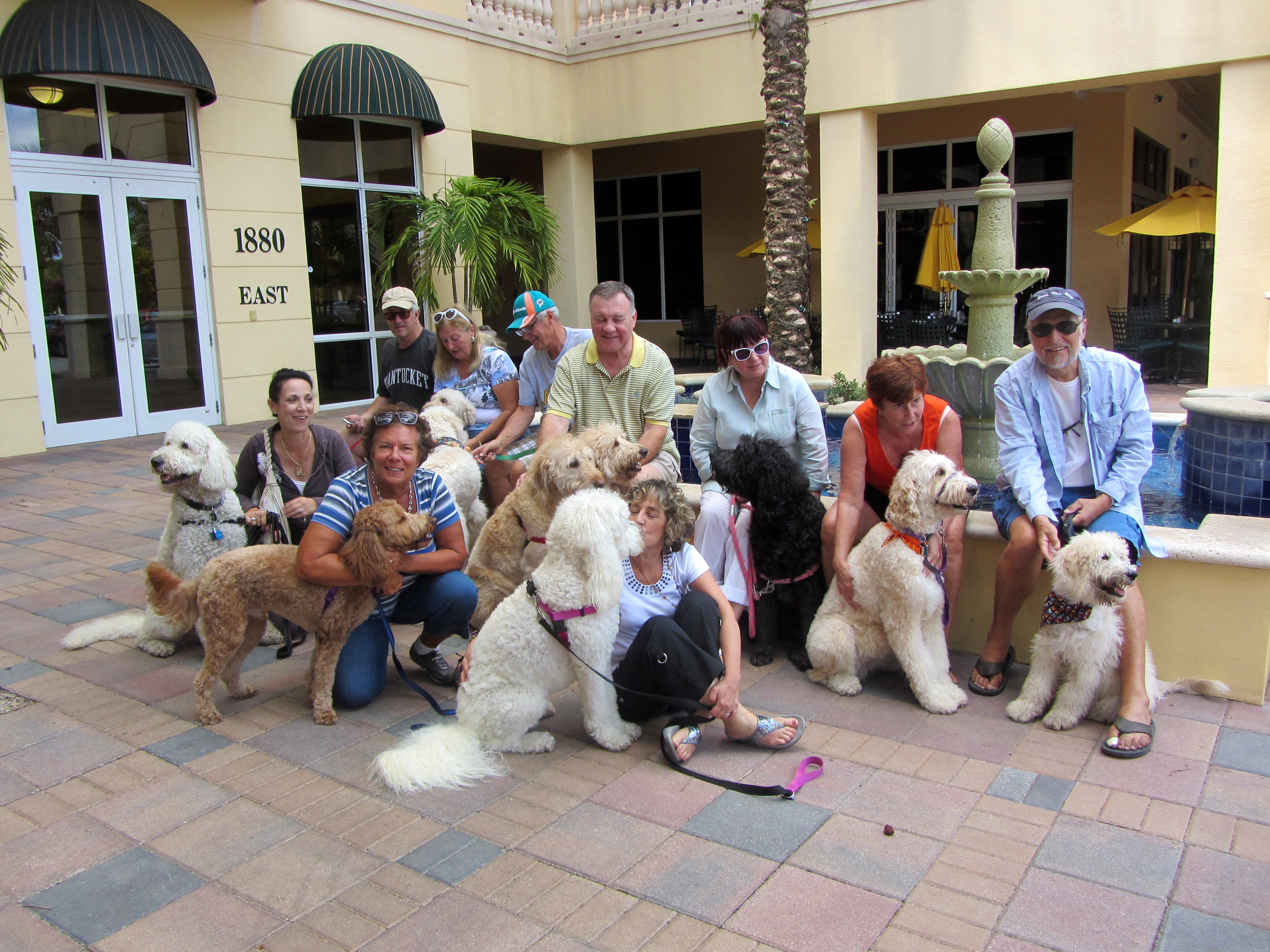 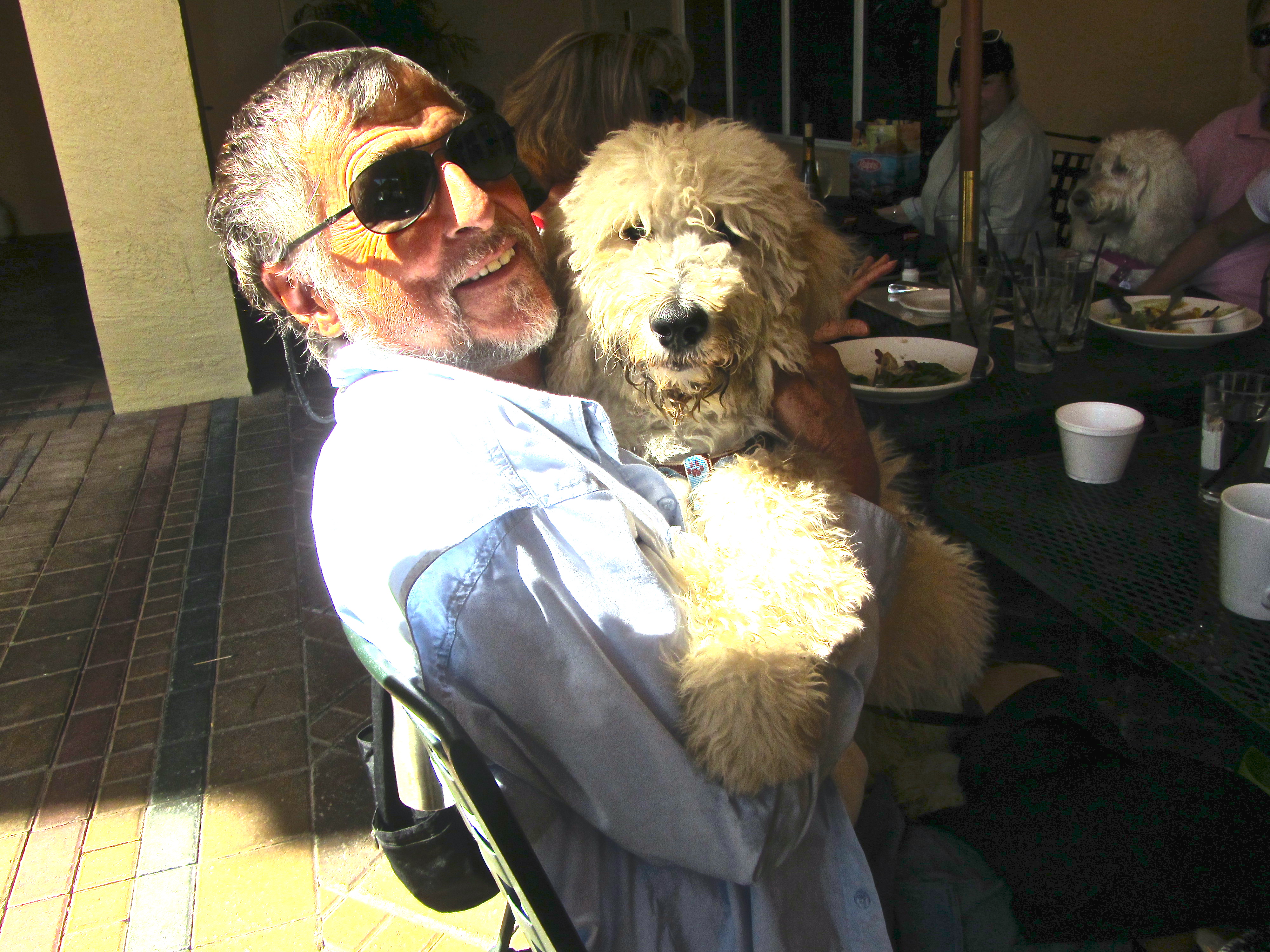 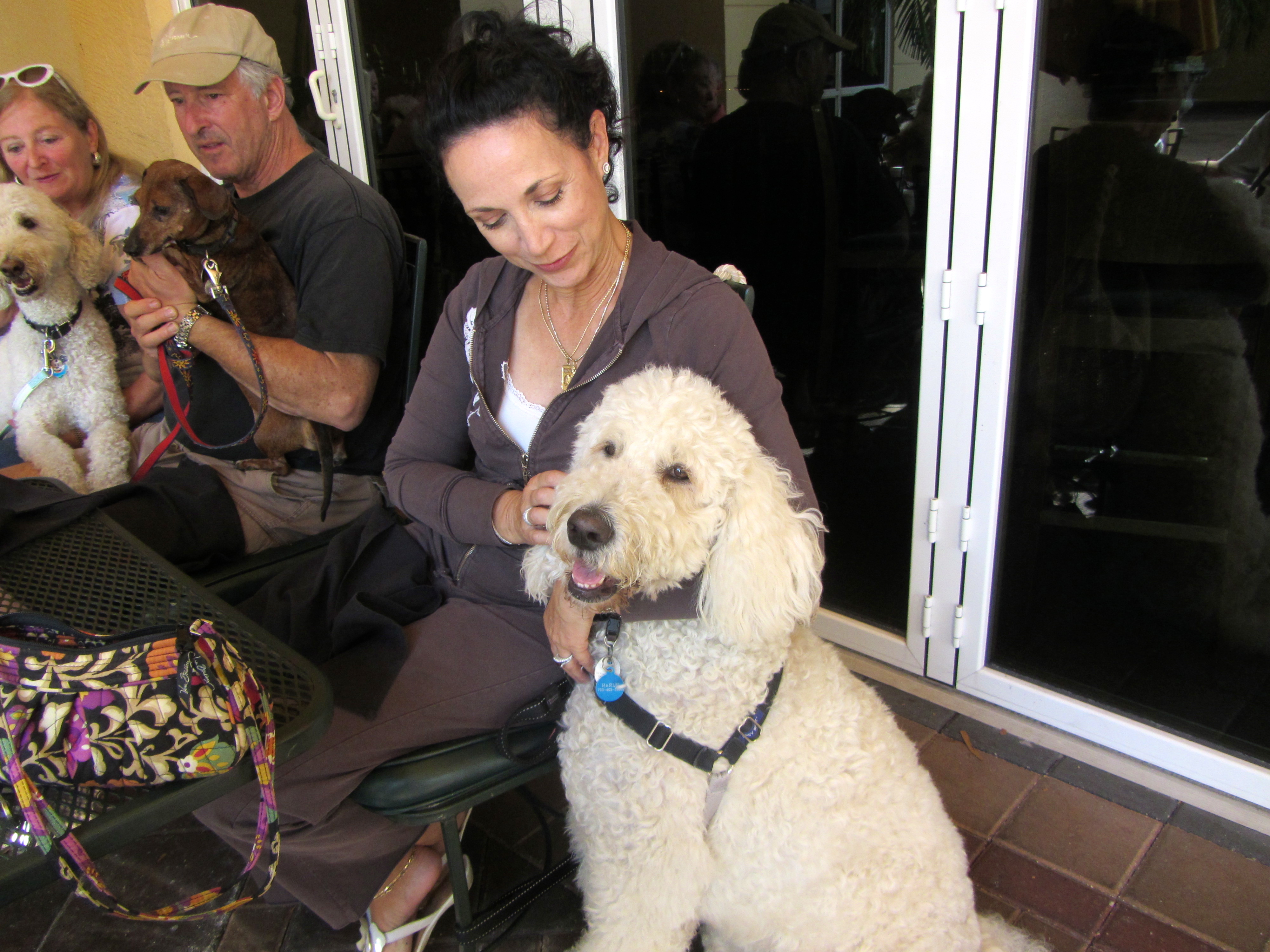 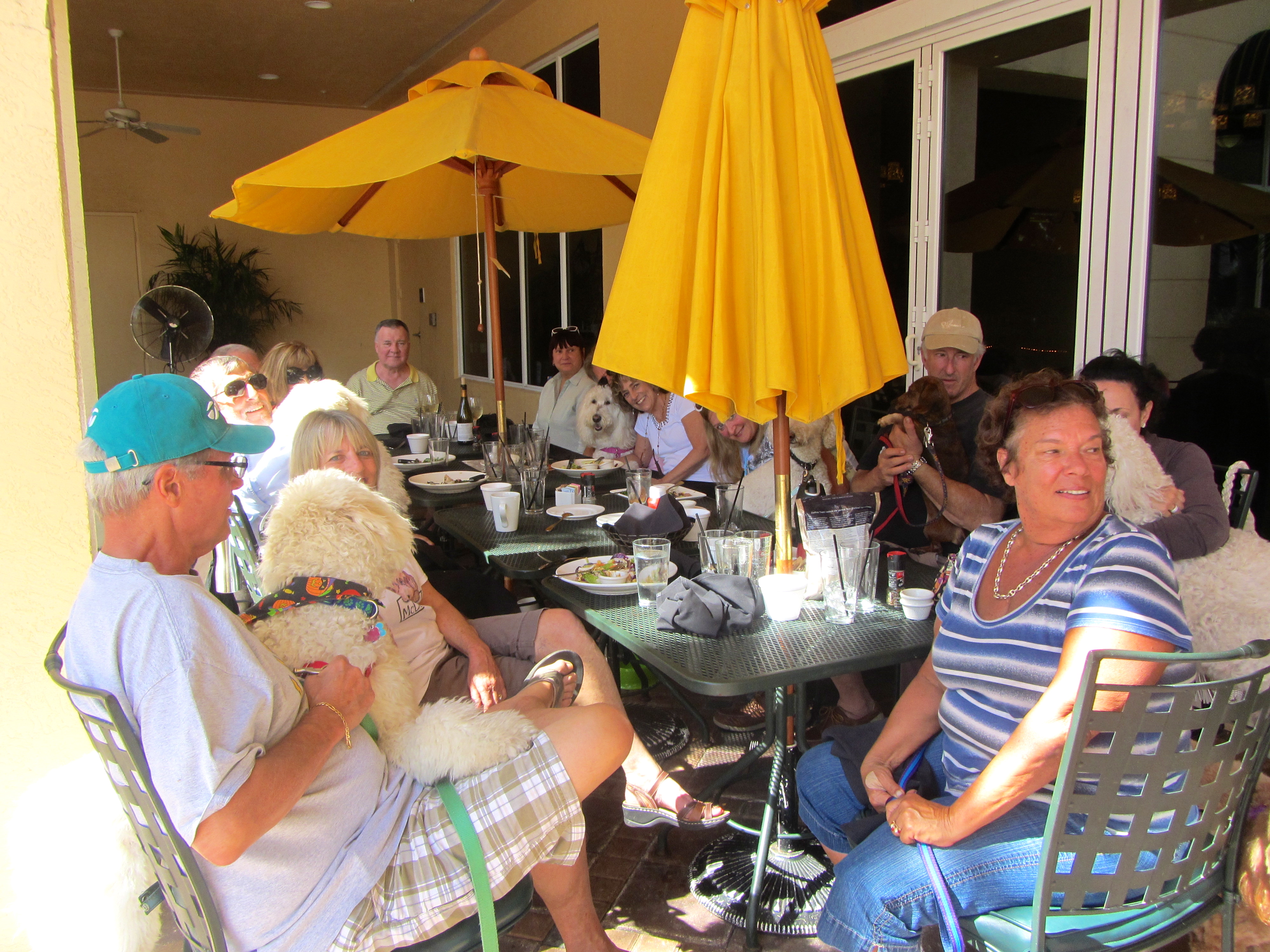 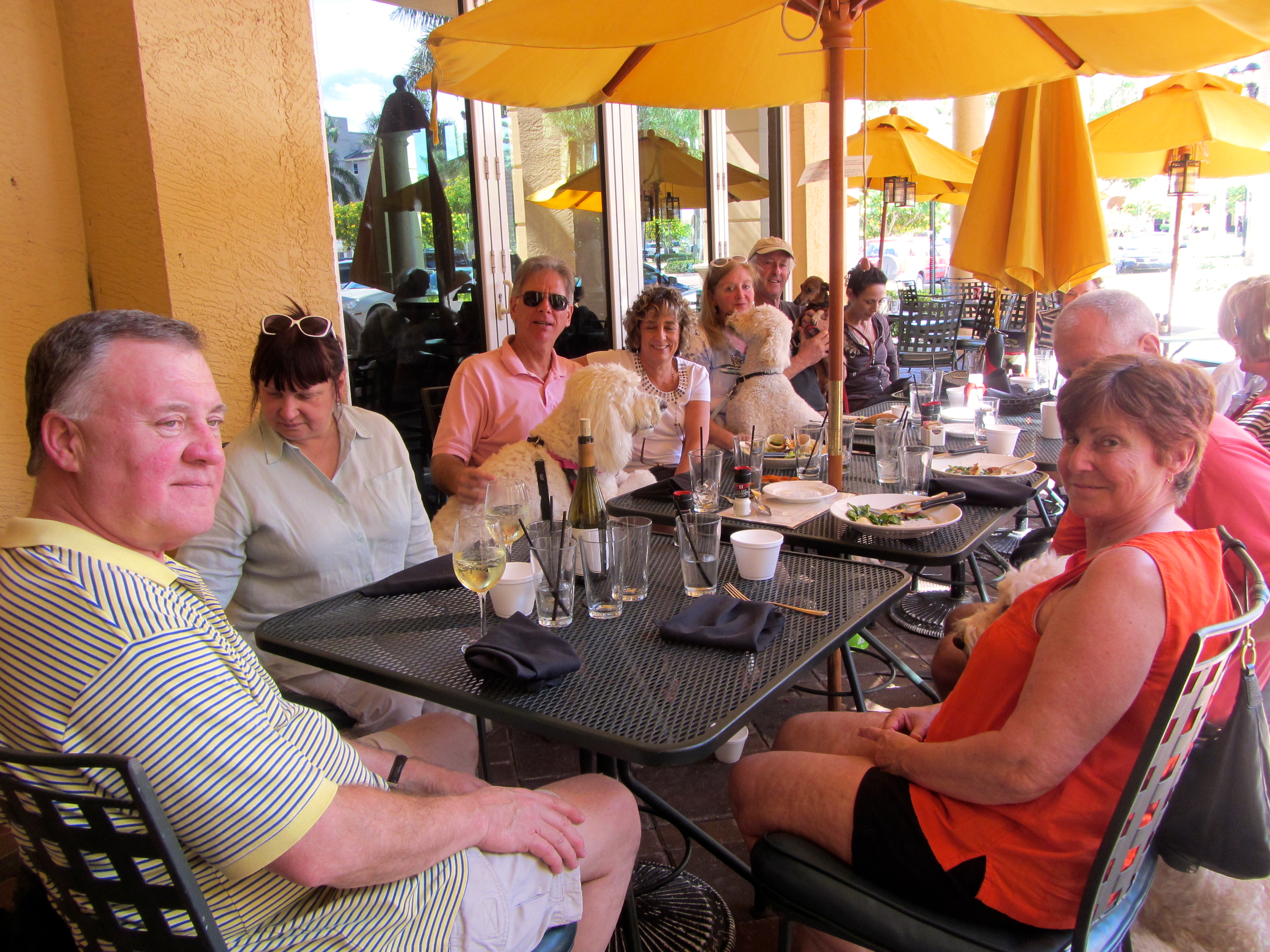 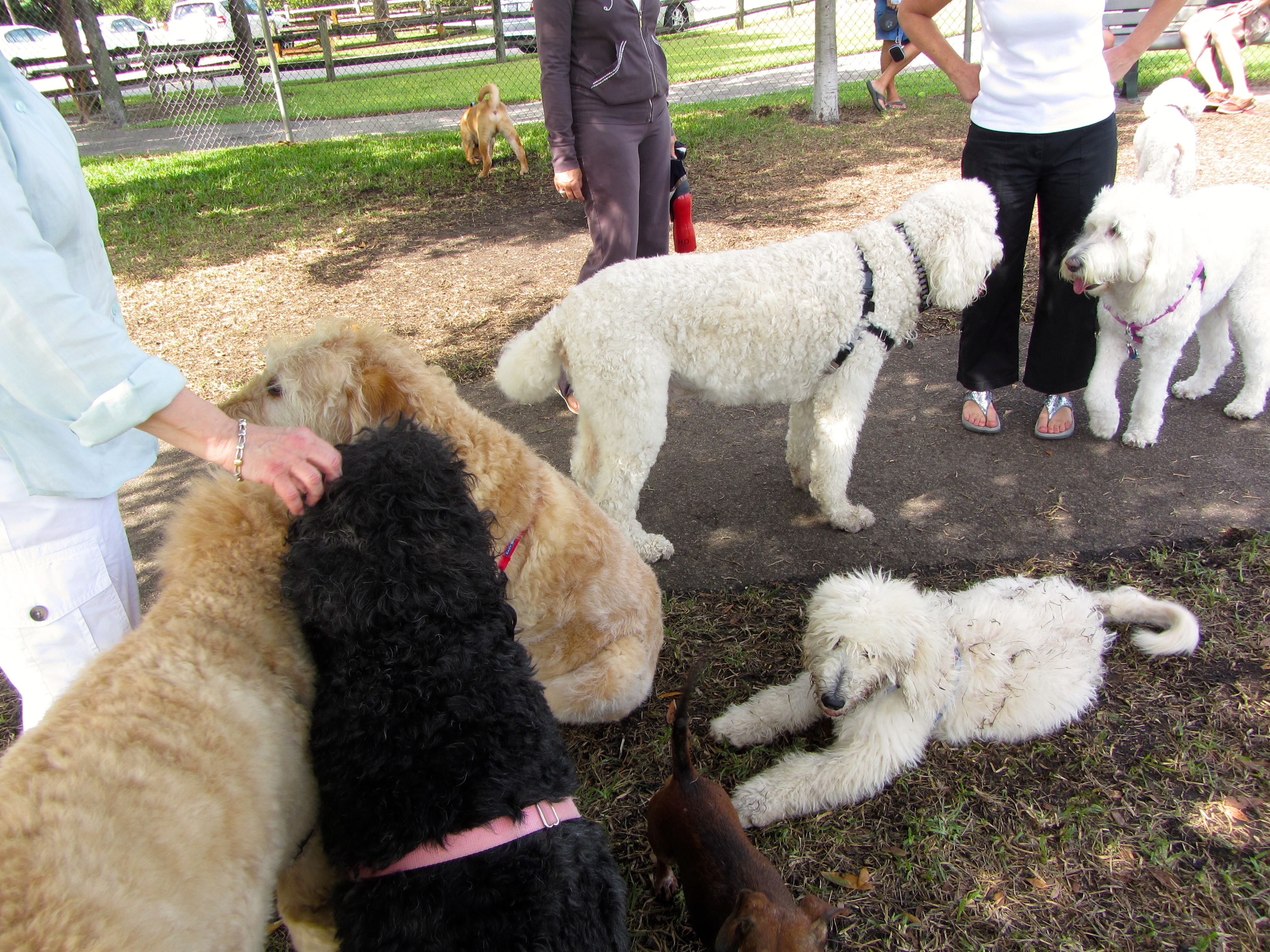 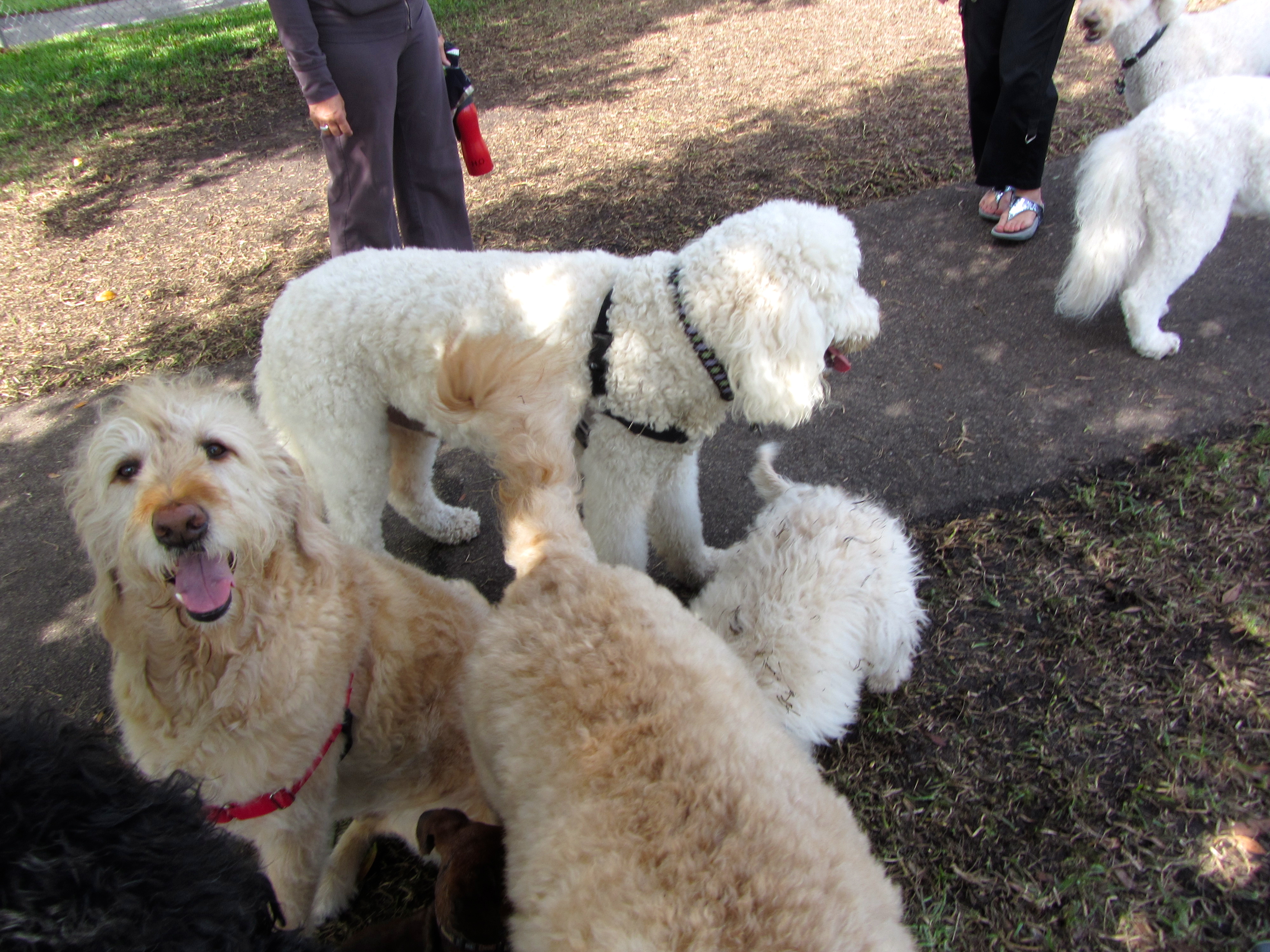 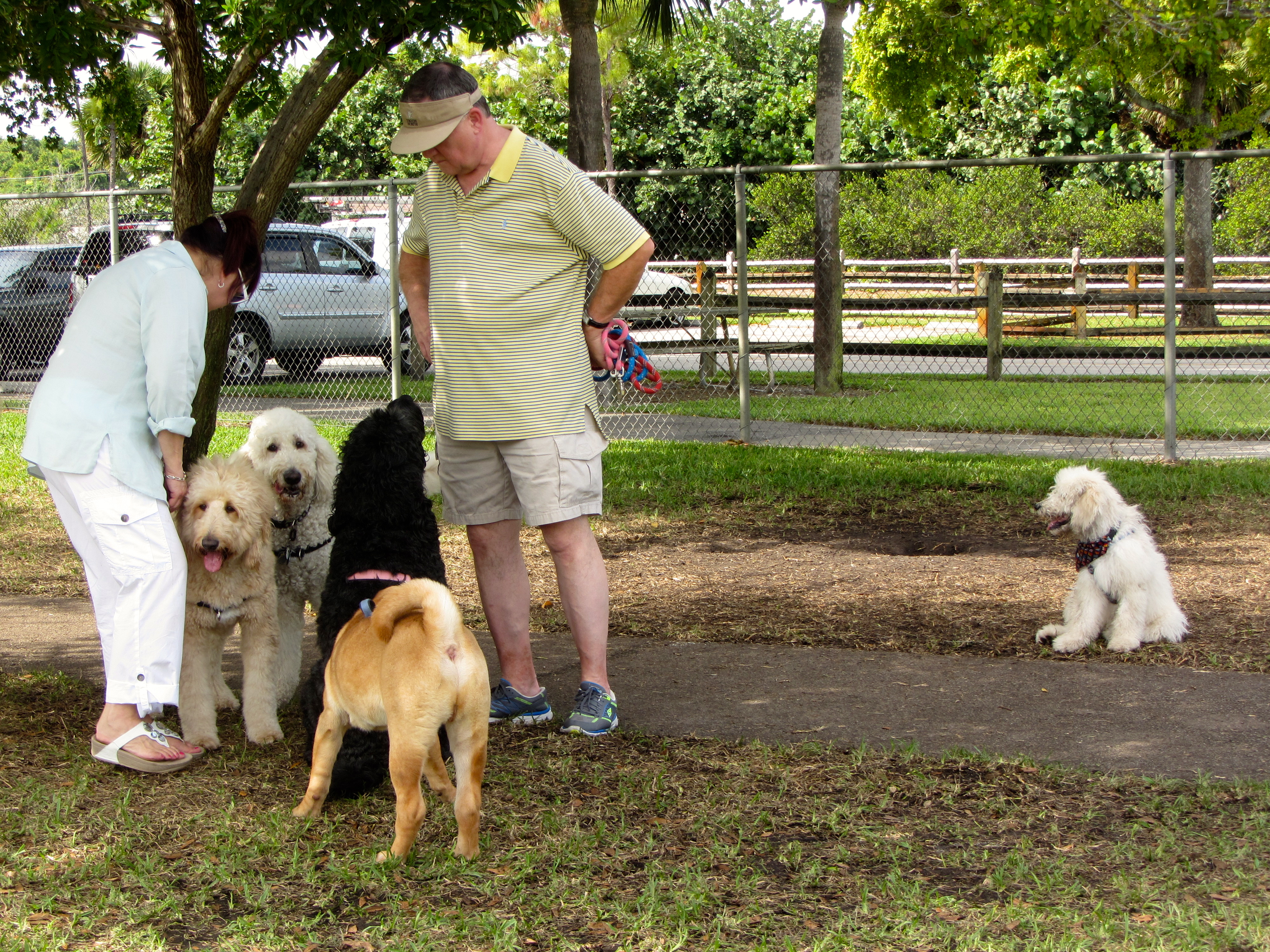 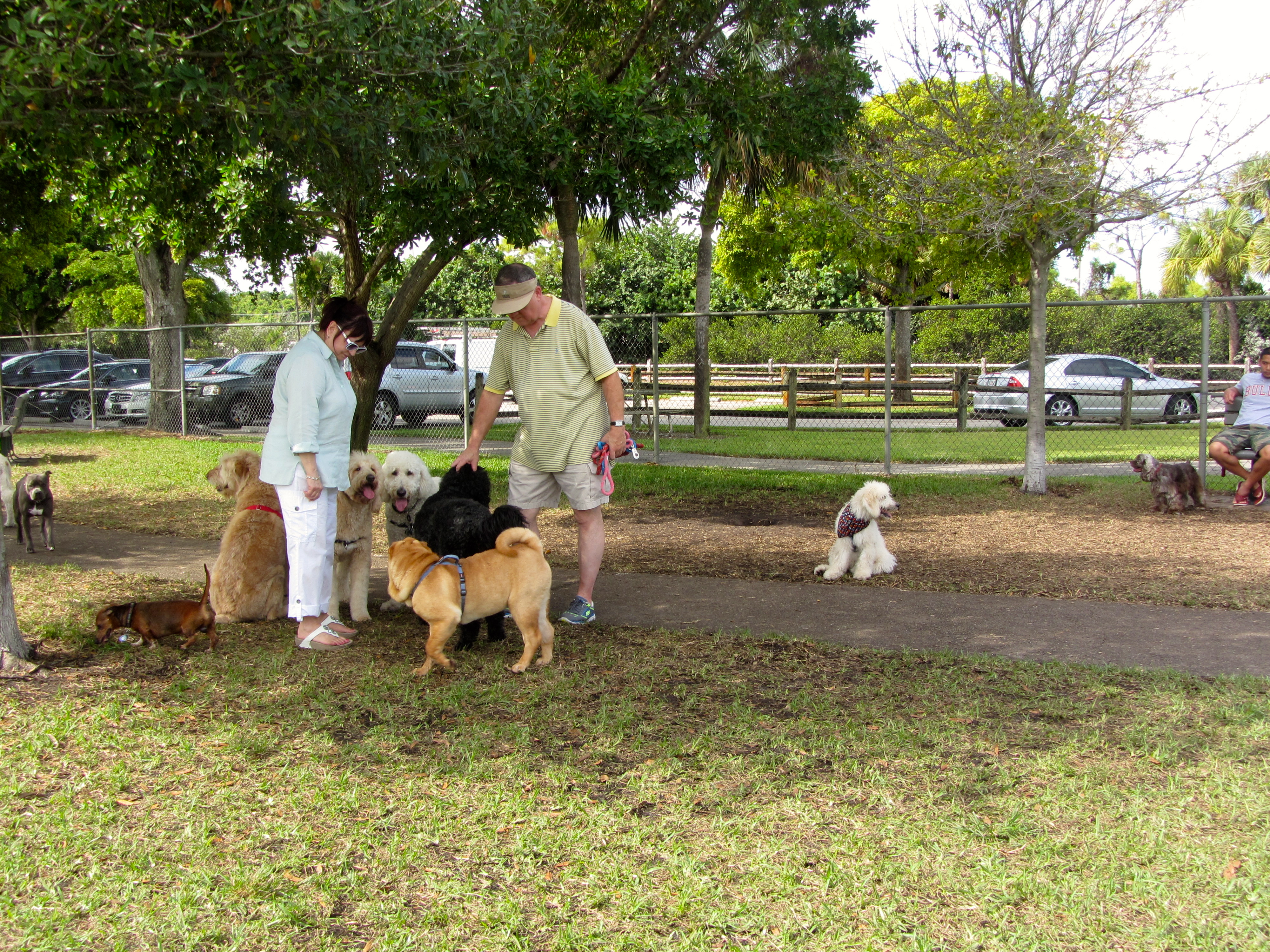 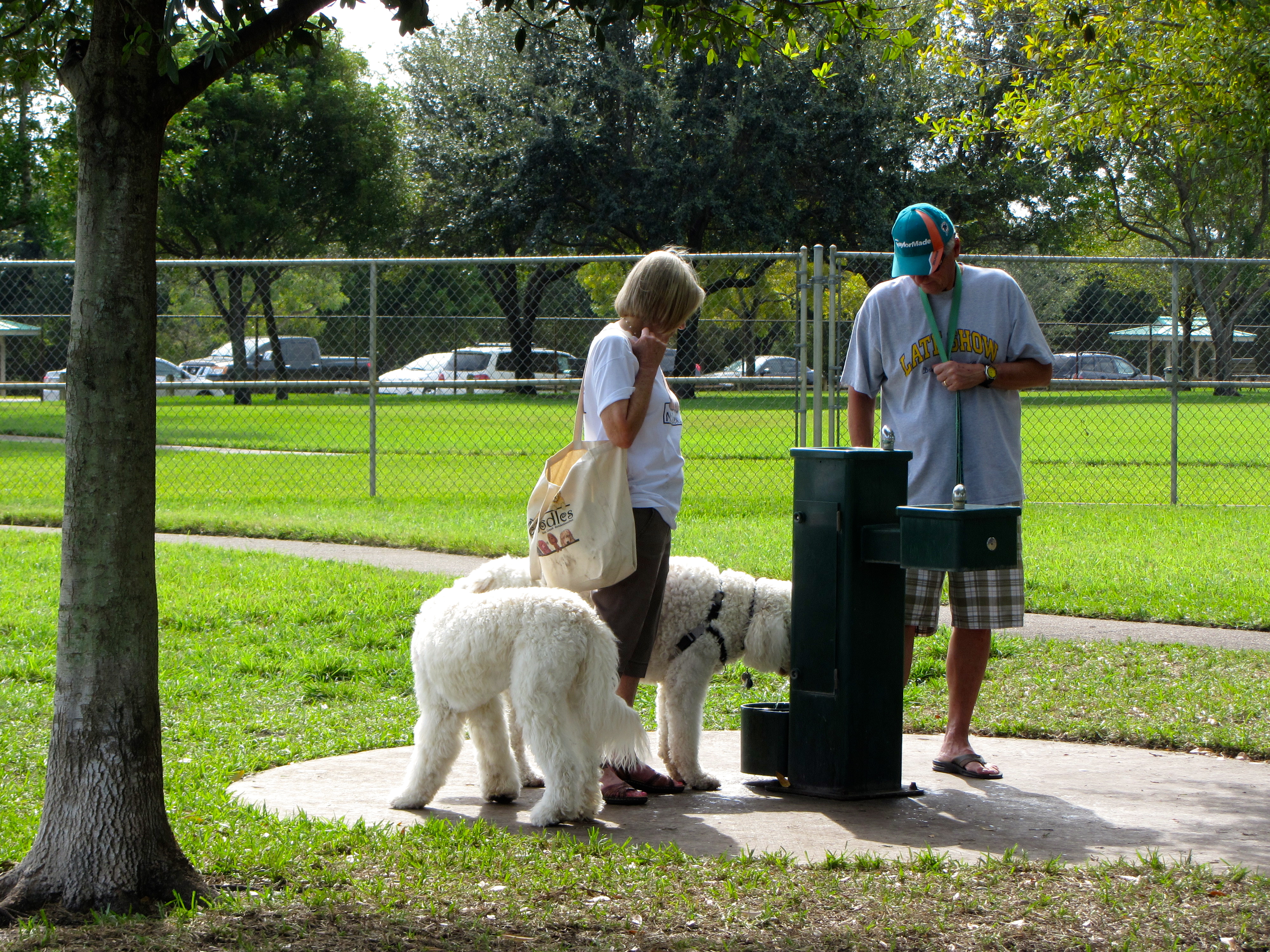 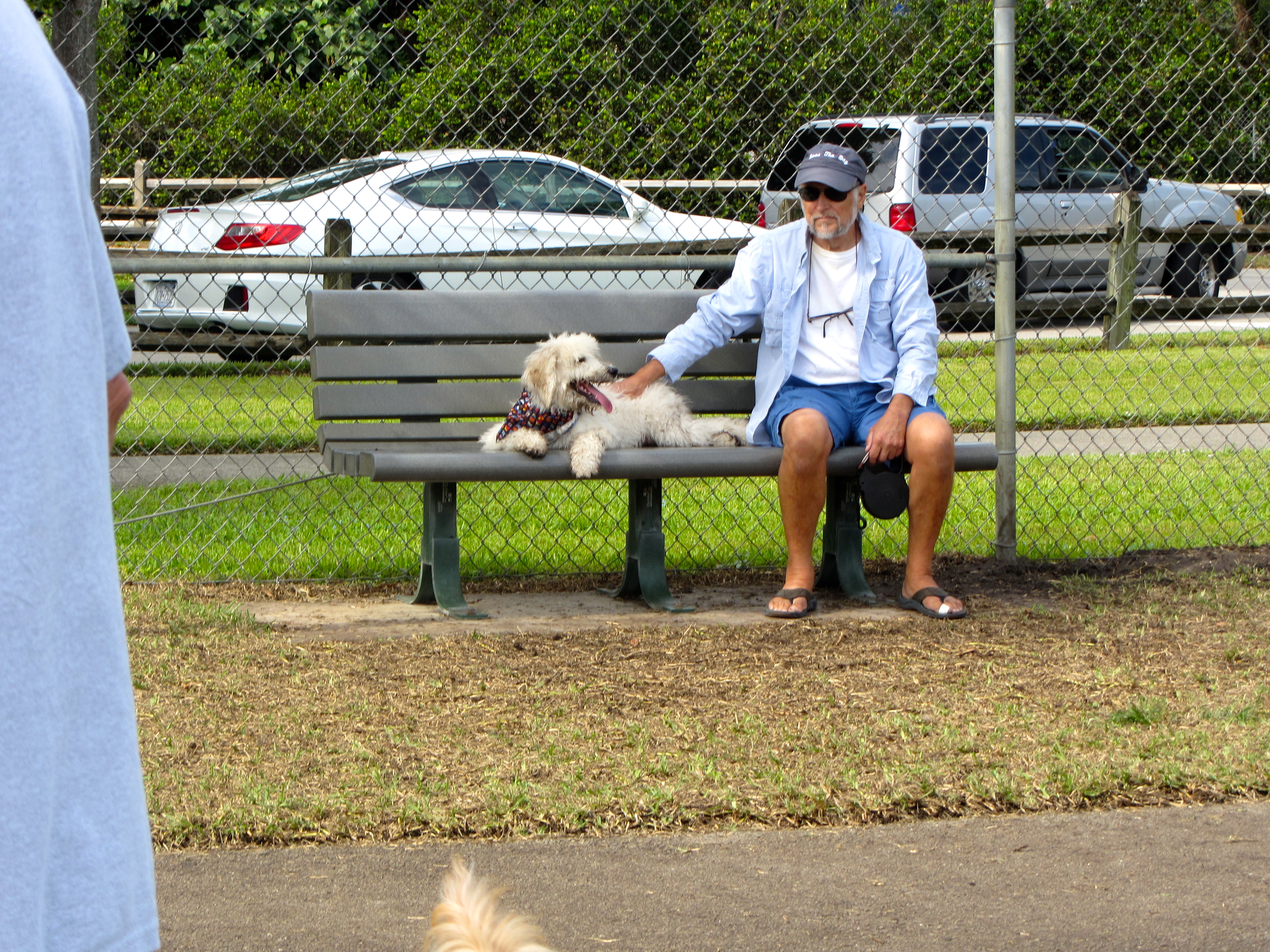 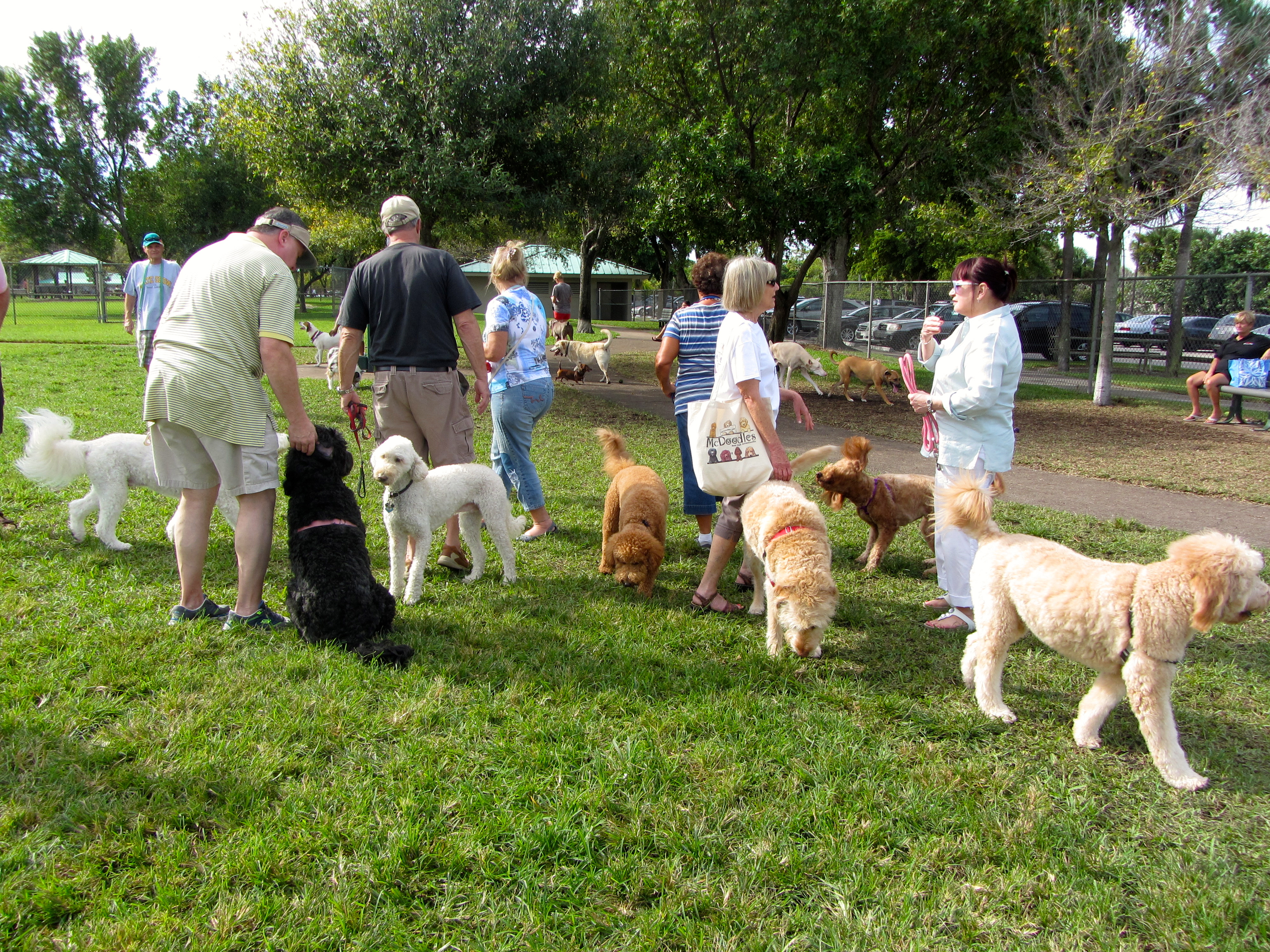 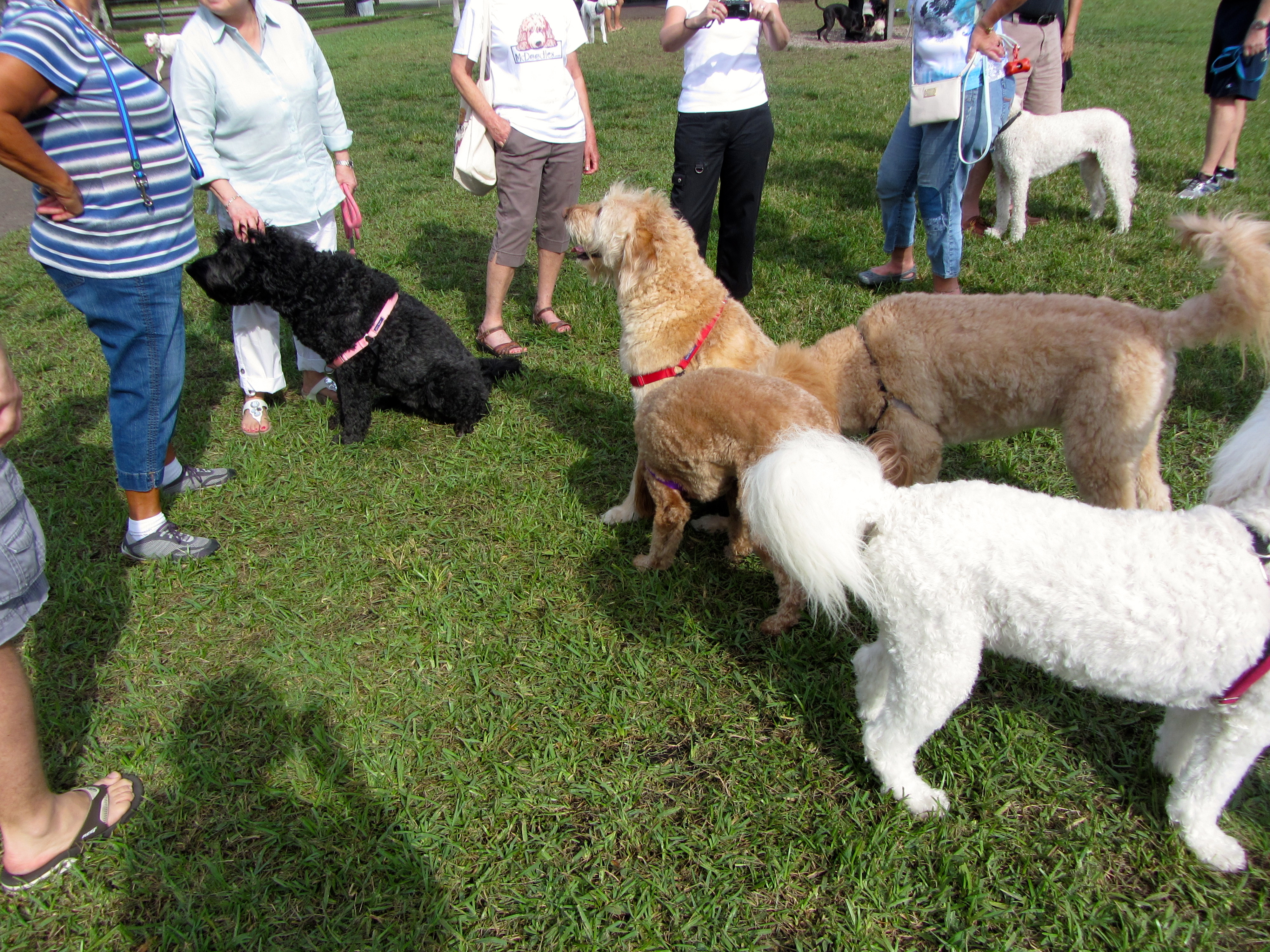 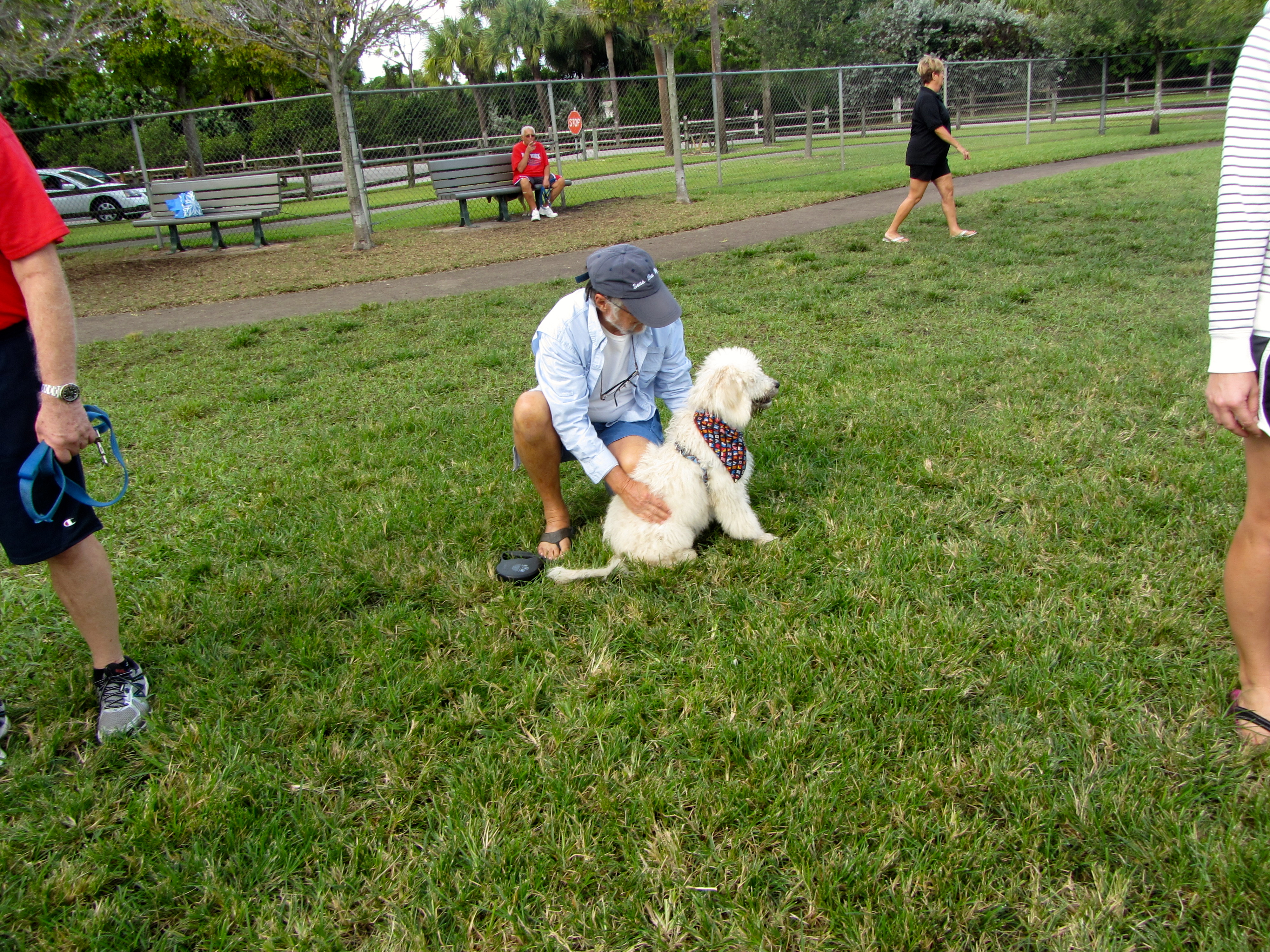 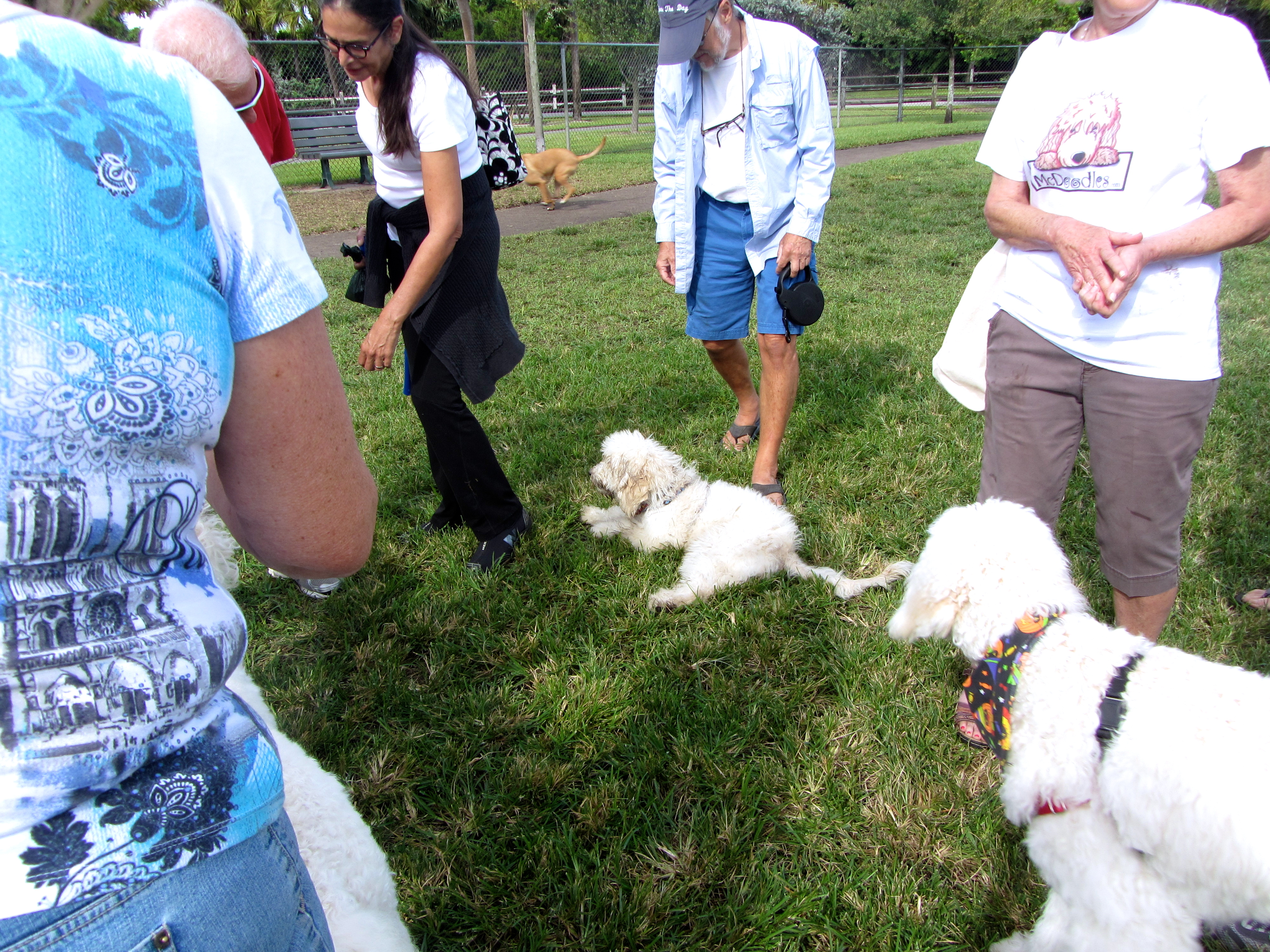