We’ve been in Georgetown 2 1/2 weeks now and have settled into a routine dominated by reading and relaxing as well as frequent get-togethers with other cruisers. The weather is almost always in the low 80’s and when the wind kicks up, we are well protected on our mooring ball in Hole 2.

Mark and Sailor visit nearby beaches twice a day in the dinghy.  Sometimes I go with them but have been avoiding the rocky path near us up a hill to the Exuma Sound side of Stocking Island where the longest ocean beach is located. I was worried about slipping and falling on my new knees, but found it fairly easy to climb the hill and follow the well groomed sandy path to the other side. On this day, Sailor decided to race down the beach by himself. When no one is around we let him off his leash. He always comes back but he LOVES to run. We got him to pose on a piece of coral after we caught up with him. The first photo below is the small beach near us where we leave the dinghy. You can see the opening to the path that goes to the other side where the Exuma Sound beach is located. 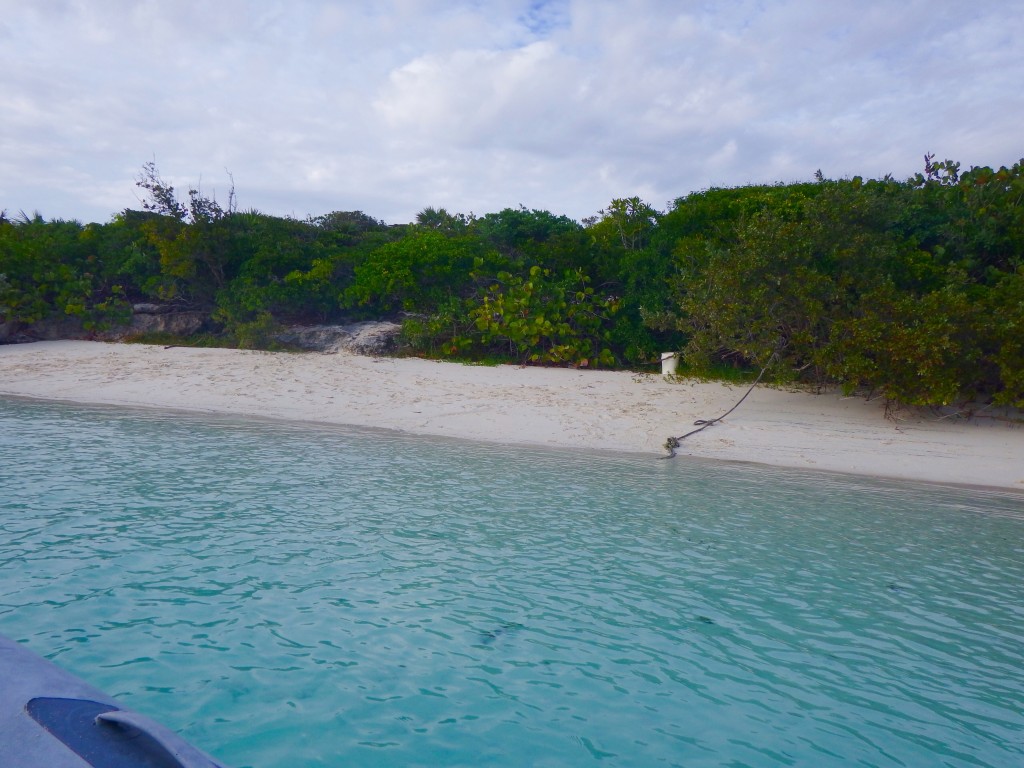 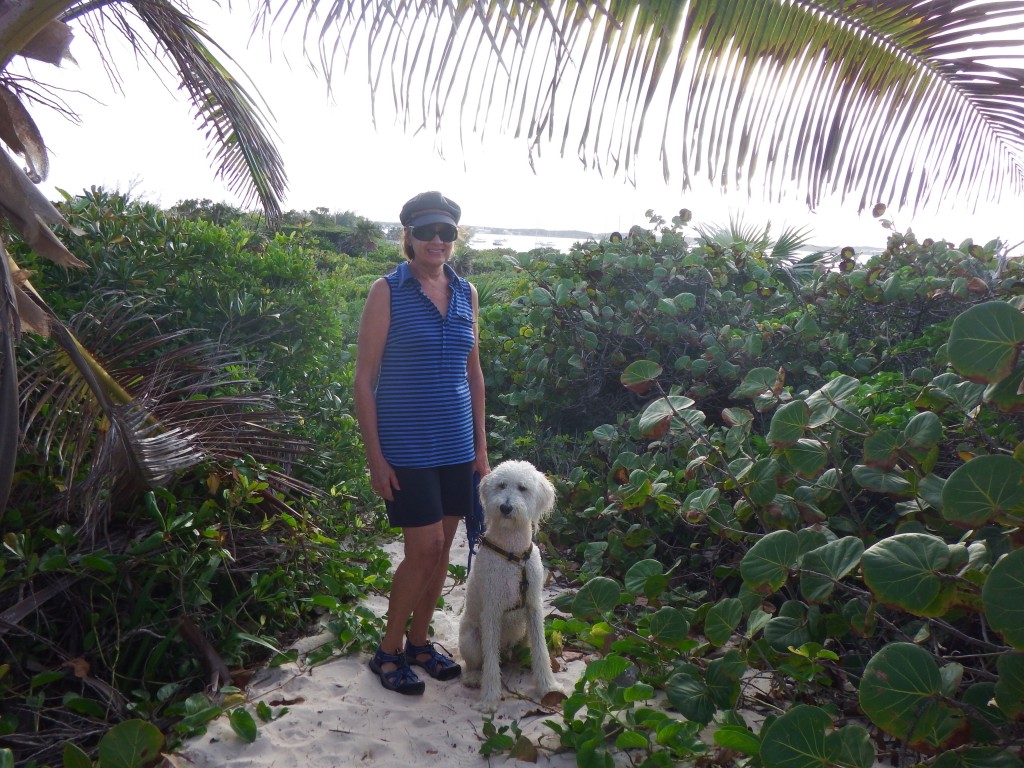 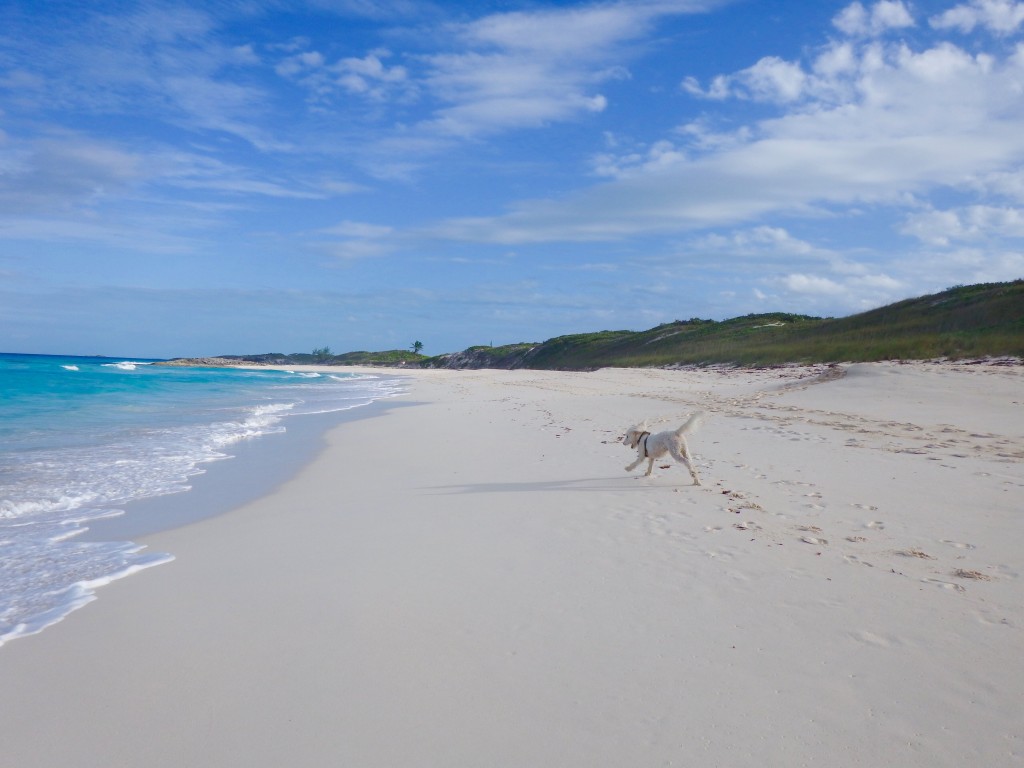 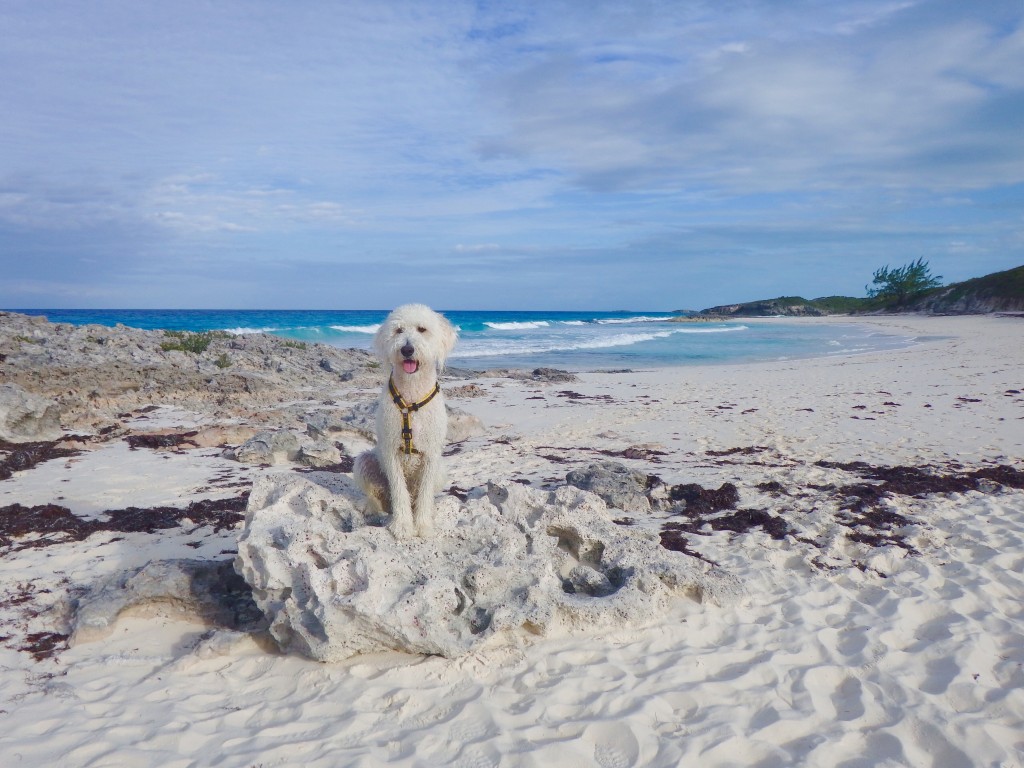 Our favorite place for swimming in Elizabeth Harbour is Flip Flop Beach, which is a dinghy ride towards the north end of the harbor. On the harbor side the water is shallow and very warm for swimming. Sailor prefers to swim out to us and then makes one of us hold on to him so he can be with us but not overexert himself. Spoiled dog? Perhaps. 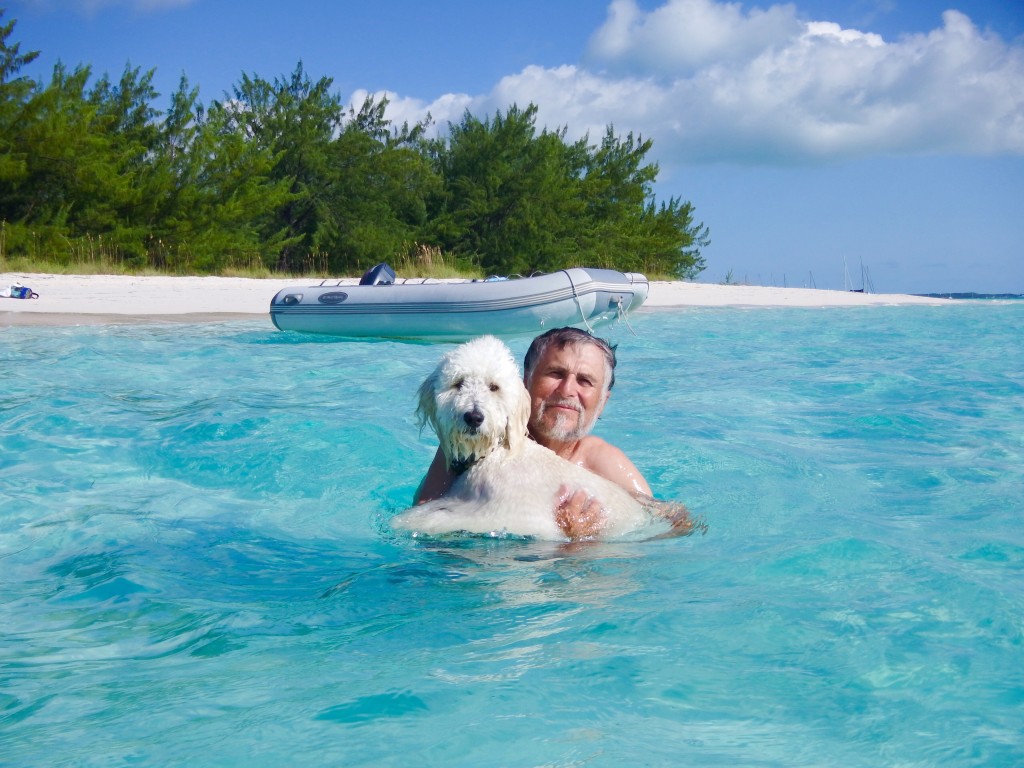 Before our swim, we followed the path from Flip Flop Beach to the Exuma Sound side and had a nice walk with Tom and Cathie (Interlude) down that beach. Then we relaxed for awhile in several chairs someone had left behind. There are some nice snorkeling areas in the harbor which we’ll visit soon. 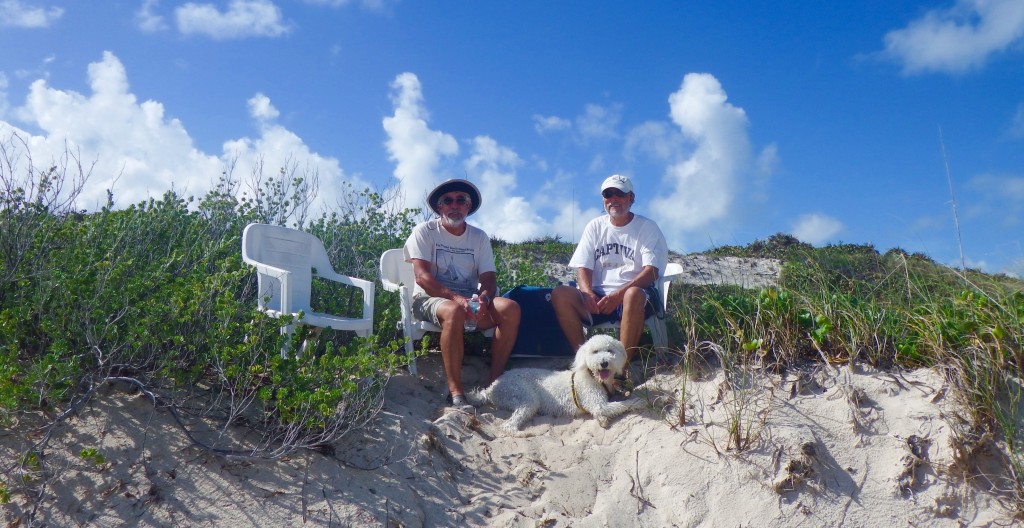 Last year we had strawberry and tomato plants, but this year it’s just tomatoes. I miss the fresh strawberries, but couldn’t find any plants before we left. The tomatoes are starting to ripen now.  It’s easy to find tomatoes to buy in The Bahamas. They are $1 each at Exuma Market but sometimes aren’t very tasty.  A local man comes to town and sells vegetables from his garden twice a week, but lately his tomatoes were mostly green and $4 for a small bag. Our tomatoes are always going to taste better than what we could buy. The smaller plant has cherry tomatoes. 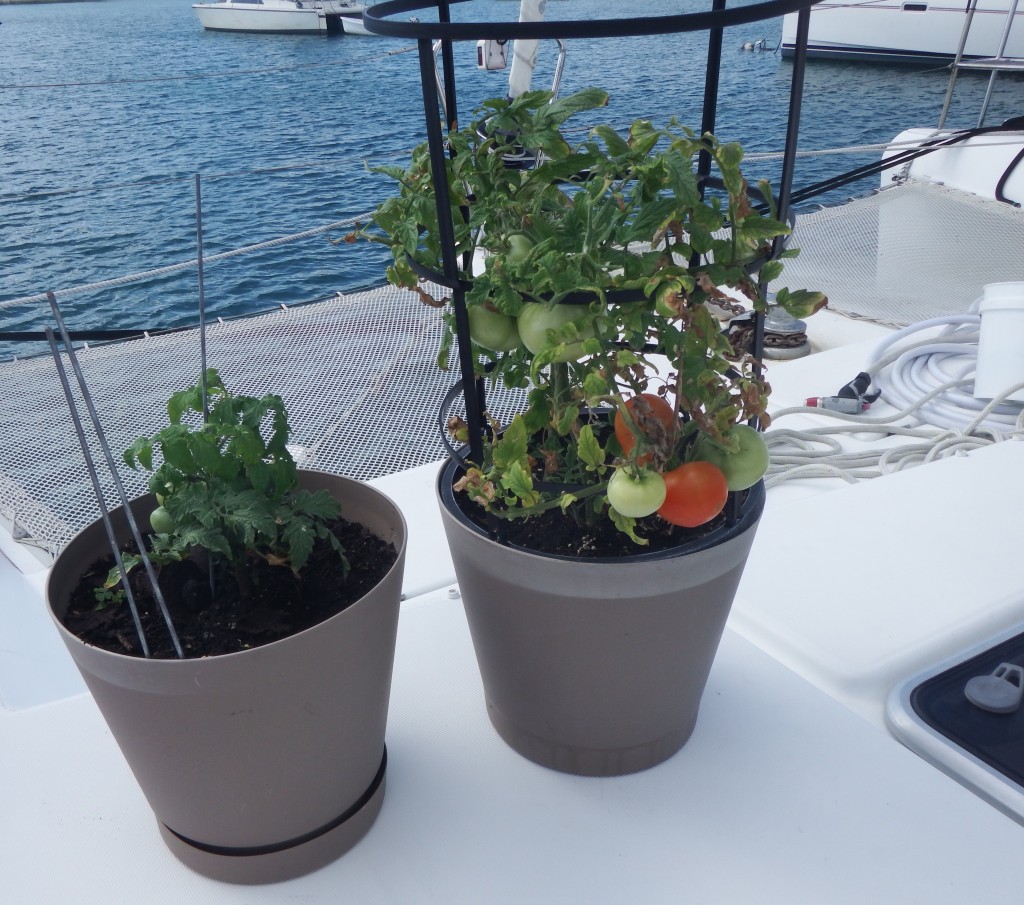 This weekend I made caramel rolls using my mom’s overnight roll recipe.  We freeze them and thaw a few to eat a day so they last several weeks. It’s difficult to find homemade bakery items other than bread here so we have to make our own. In past years there was a Bahamian woman who would bring bakery goods to town several times a week and set them up on a table next to the Exuma Market, but apparently she has retired. 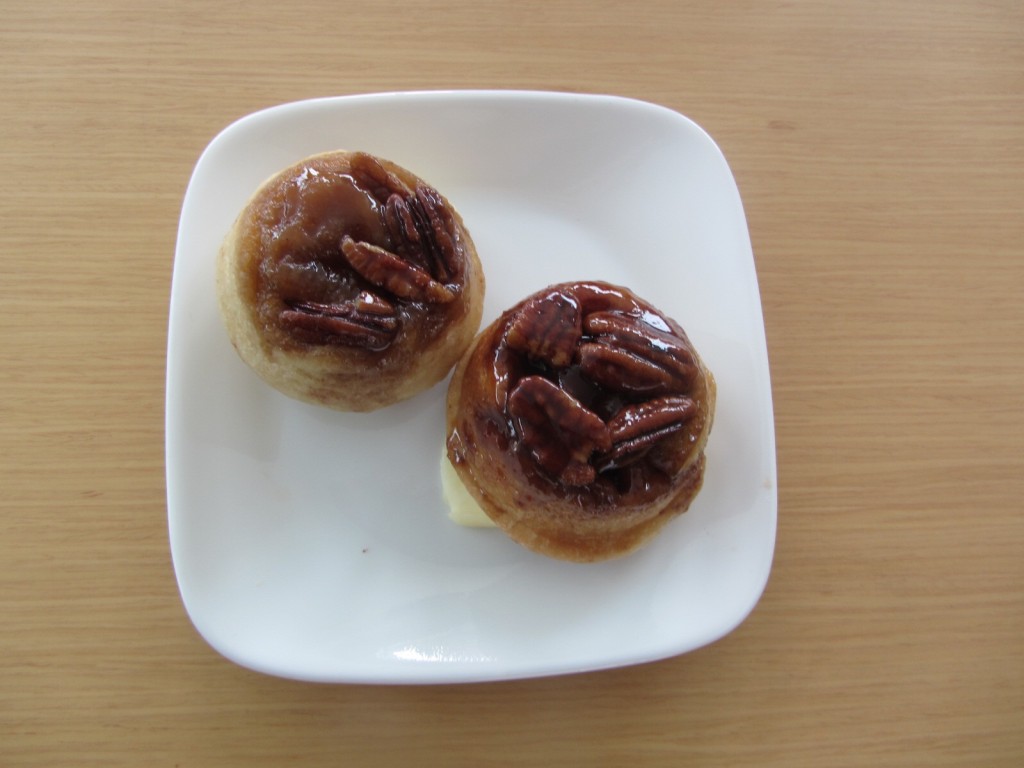 I think we have met more cruisers in the last two weeks in Georgetown than we have in our entire past three trips to the Bahamas. The two main reasons are we are in Hole 2 with friendly neighbors and we have been playing Texas Hold’em.  Yesterday we went to a bonfire get-together on one of the small beaches in the Hole.  About 20 Hole 2 cruisers were there. Everyone brought their own meat to cook over the fire and something to share.  We had people coming over to play cards last night so just went to visit and didn’t eat this time. It seems like the Hole 2 beach get-togethers are weekly events.

I have learned to play Texas Hold’em Poker, a very popular game here.  We play two times a week at the St. Francis Restaurant and Resort. It costs $5 to play and the top three winners split the pot. There are three tables of nine or ten playing, but later in the season there will be more tables. Some of the people are here for a week or two at the resort, some live in houses, but most are cruisers. We have also been hosting games with a few other couples on Saturdays on Seas the Day, mainly because we have a big table in the salon and another in the cockpit.  We also play Mexican Train dominoes with Cathie and Tom occasionally.

The photo below was from last night as we were “chipping up” when we exchange our smaller chips for thousand ones.  Unfortunately the hanging lamp over the cockpit table caused a glare in the picture. Cathie (Interlude) was  helping Jean (Winterlude) count her chips.  Obviously Jean was having a good night! I only had a few of the thousand chips at that time, but ended up coming in second and Jean won. 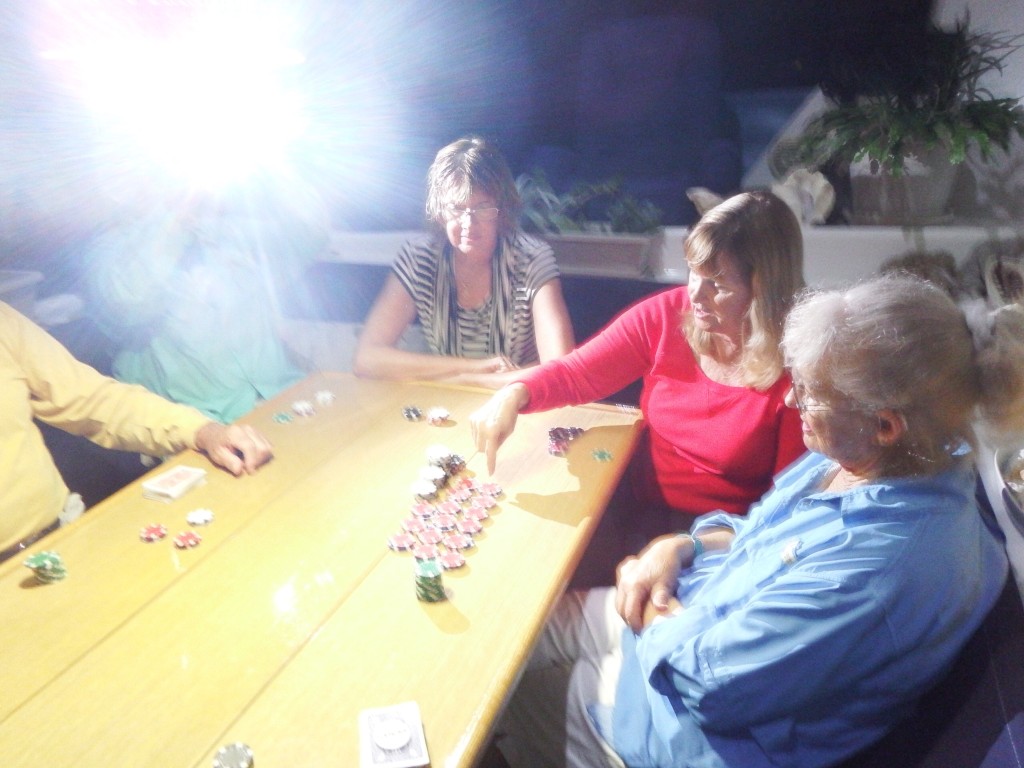 There are many other activities going on in Georgetown. Every morning at 8 am we can listen to the Cruisers’ Net on VHF channel 72 to find out what is happening. The Net lasts 15-20 minutes with lots of information besides activities. Cruisers can ask for help, offer items for sale or trade, introduce themselves if they just arrived, hear the weather report, etc. Local businesses also talk about what they have to offer. Last night there was a free outdoor country western concert in town with US Grammy nominated singers and a Canadian who was their Entertainer of the Year. Also tonight the St. Francis is hosting their weekly Trivia Night where teams complete. A yoga instructor has classes on the beach every weekday morning, but I haven’t gone yet because I am not supposed to kneel therefore I can’t get on the ground. Beach Church is held on Volleyball Beach Sunday mornings. A very entertaining local historian gives talks every Sunday afternoon about The Bahamas. At 2:00 every day, people meet on Volleyball  beach to play games and visit. When Regatta starts in mid February there will be more activities culminating with a sailboat race around Stocking Island and another one in the harbor. The nice thing is you can do as little or as much as you want here.  You can be around lots of people or go someplace by yourself.