We left Sunset Bay Marina in Stuart at 0947 on November 20, 2018, and dropped the anchor in Lake Worth at 1544, a total of 5 hours and 57 minutes to go 37 miles. We went under 12 bridges, beginning with the Old Roosevelt Bridge next to our marina, and ending with the Riviera Bridge. Three are 65 ft fixed bridges, which we can sneak under with our 63 ft mast and an anemometer (tells wind speed) on top of it. The rest either open on demand or twice an hour, on the hour and half hour or at :15 and :45 after the hour. We rarely have to wait for openings but today we reached the Indiantown Bridge just after it had gone down so had to wait a half hour. We are now anchored in Lake Worth very near the inlet to the ocean. We haven’t been on the ICW since May, 2017, but Sailor seemed to remember just what to do. 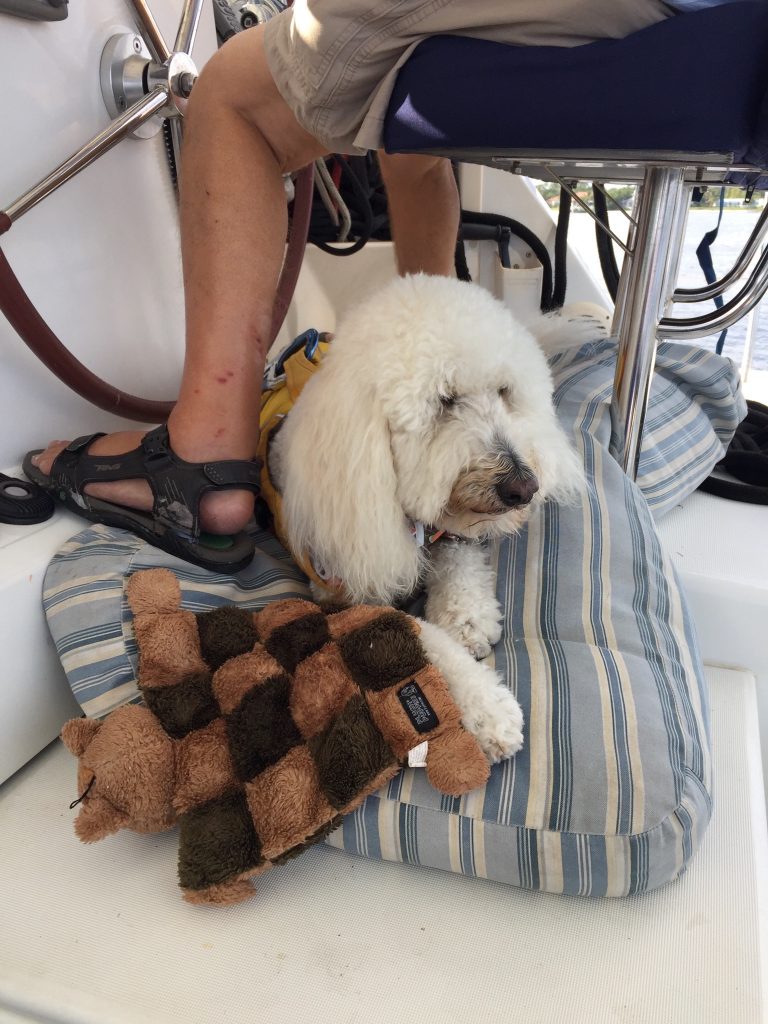 The plan had been to leave yesterday, but as they say, “Plans on a boat are written in the sand at high tide.” We were all ready to leave at slack tide, 0730, when we discovered our chart plotter was dead. This instrument has our maps and routes on it. That was just after we turned on our VHF radio and called a station for a radio check. There was no answer and the radio was not working. We stayed at Sunset Bay and Mark spent the day fixing them. We had a spare chart plotter so he replaced the dead one and he was able to fix the radio. We suspected that perhaps we had a power surge or maybe were struck by lightning, although both devices had worked a week earlier when we moved to a different slip in the marina and there hadn’t been any storms. Today everything seemed to be working as we disconnected from the power at our slip and motored to the fuel dock. Away from shore power, the boat gets its electric power on the 12 volt DC system unless we turn on the inverter and then we have 120 volt AC.  Everything on the boat works on the 12 volt system except anything that has to be plugged into the electric outlets plus heat and air conditioning. We do have 12 volt outlets and we use them to charge batteries, phones, tablets, etc. Today we discovered the inverter is not working. Mark thinks he can fix it but if not we’ll have to buy a new one before we leave for the Bahamas.

We always avoid going on the ICW on weekends, and especially holiday weekends. Apparently this is a holiday week, with Thanksgiving on Thursday, because today the boat traffic was as heavy as we have ever seen it. This meant we got waked multiple times, since many power boaters love to go fast on the ICW and don’t care who rocks wildly from their large wake after they pass. To be fair, a few power boaters do give us a slow pass, and we always try to thank them on the radio. There were two or three today. We also had problems at a few bridges. The photo below shows a typical example. This Sportfisher was going north waiting on one side of the bridge and we were going south waiting on the other side. We called them on the radio and told them we’d need to stay on our port (left) side of the bridge since this is a single bascule bridge and our 63 ft mast would hit it if we stayed on our starboard (right) side of the bridge. They didn’t answer our two calls, so we had to slow down when they went on the side we needed. Then they sped up and waked us just as we got close to the bridge which caused us to rock back and forth. Another time two powerboats were waiting on the other side of the bridge.  They didn’t answer our calls on the radio so we informed the bridge tender that we would wait for them to go under before we started. Usually boats waiting for bridge openings on opposite sides call each other to decide who is going first, although the “rule” is that the boat going against the current goes first. Most boaters don’t know which way the current is going or don’t care. The two powerboats probably heard us talking to the bridge tender and they went first. The two pictures below show a single bascule bridge with only one span going up. This is the one where the Sportfisher almost caused us to hit our mast on the bridge. The second one is a much easier bascule bridge to go through since both sides go up straight in the air. 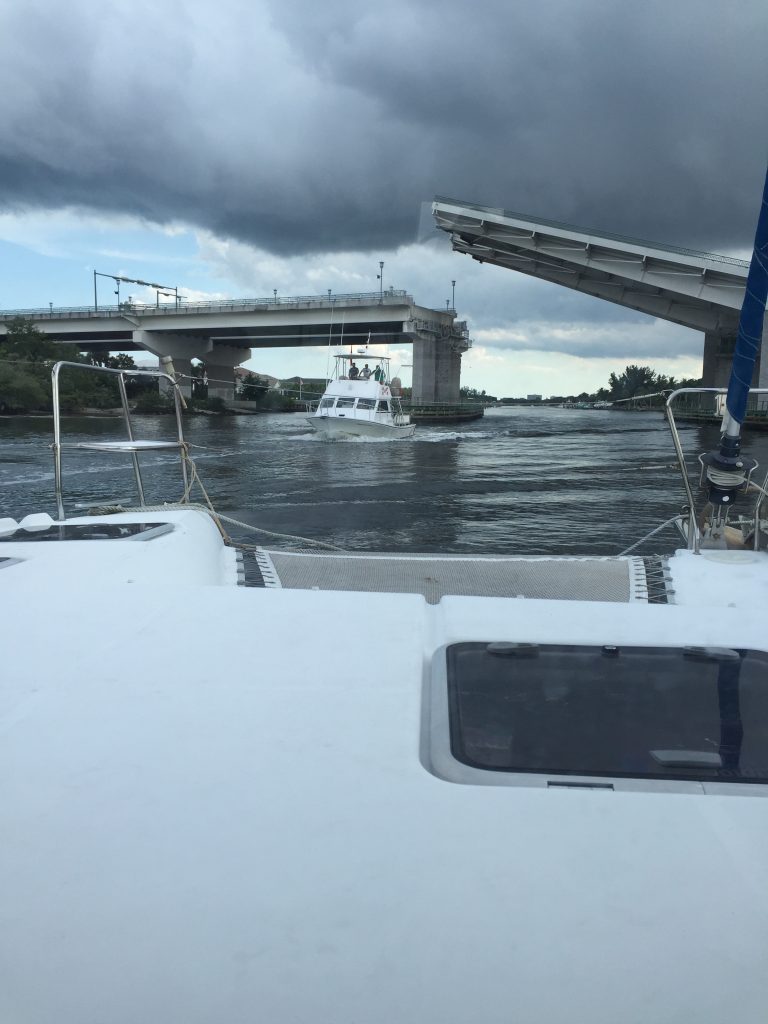 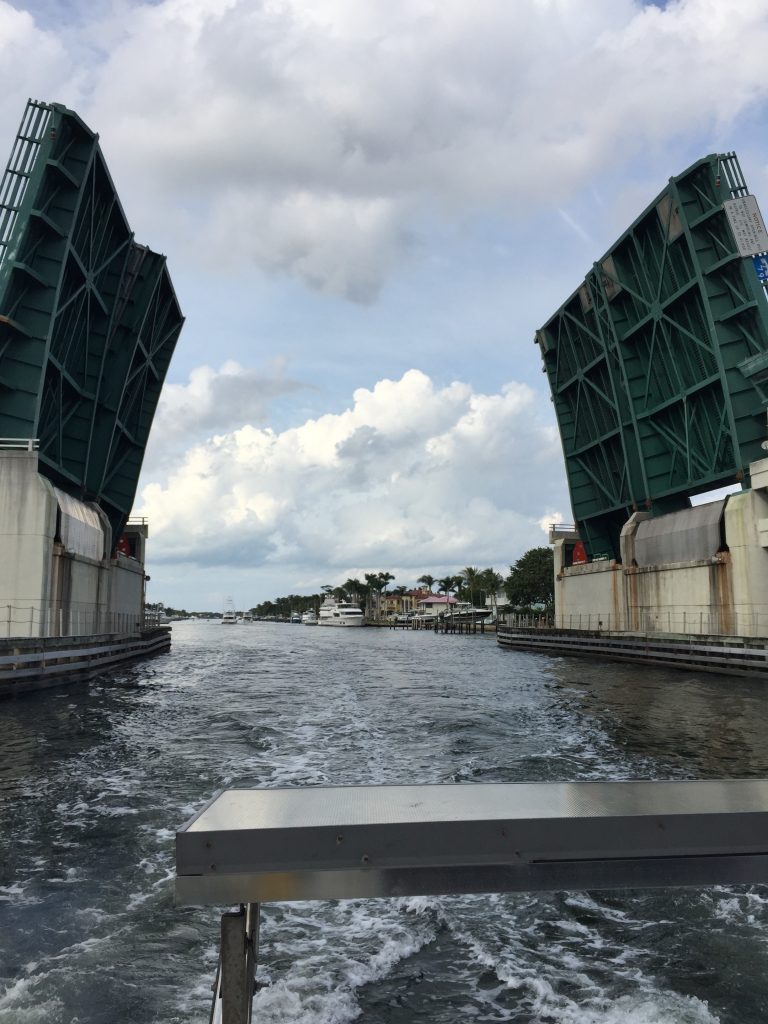 Sailor hasn’t been sailing for a year and a half but he remembered exactly how to be a boat dog. He is always tethered to the helm seat with his life jacket on. He usually sleeps there unless it gets rough. Today, he had enough of the waking so he made me get in a bed with him. After we dropped the anchor, we took Sailor in the dinghy the short distance to Peanut Island. President John Kennedy spent time in Palm Beach and had a bomb shelter on Peanut Island. There is also a Coast Guard station on the island. Google it…..very interesting history. In the photos below you can see how close our boat is anchored to Peanut Island. The walkways are lovely and there are some nice sandy beaches. 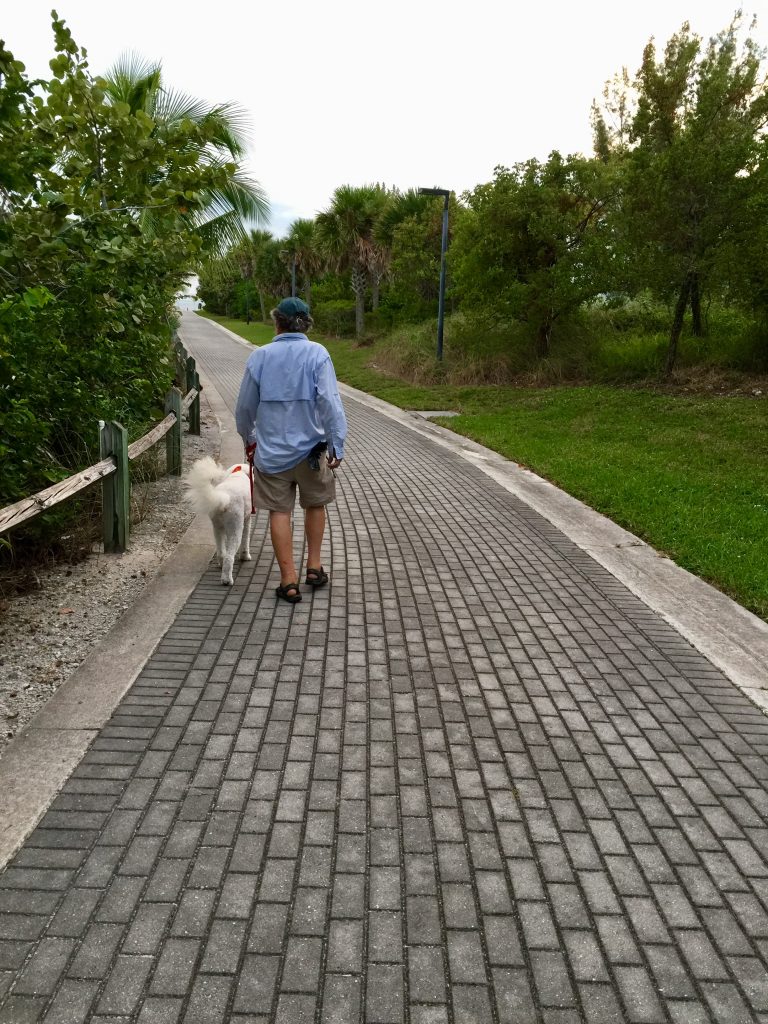 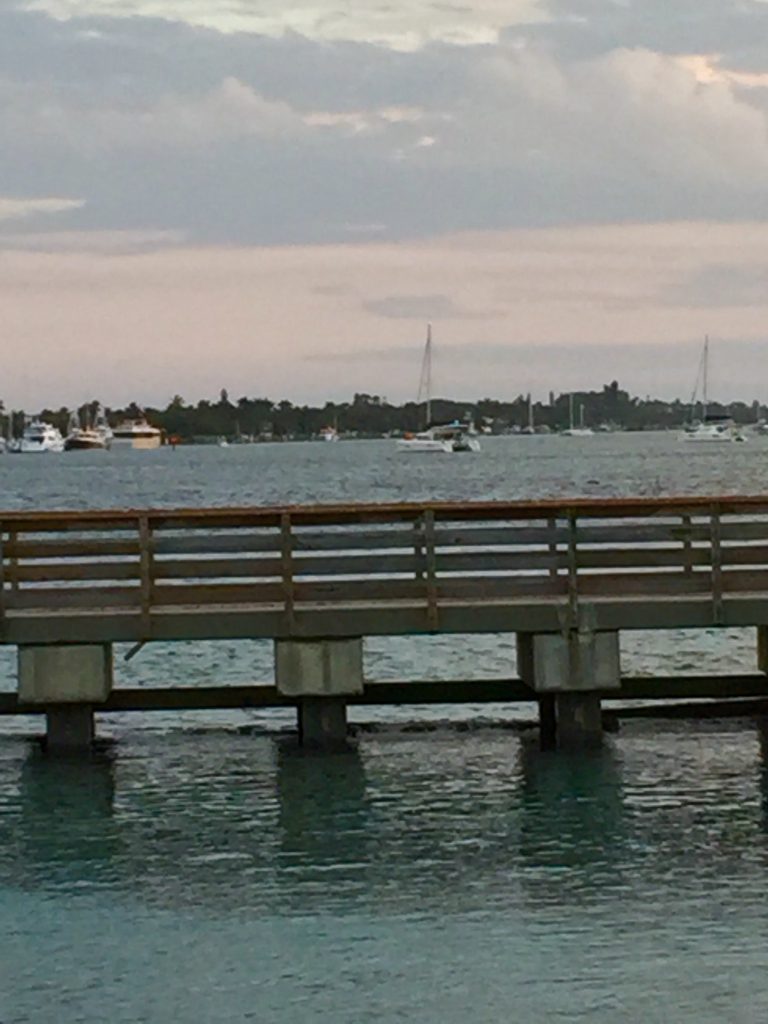 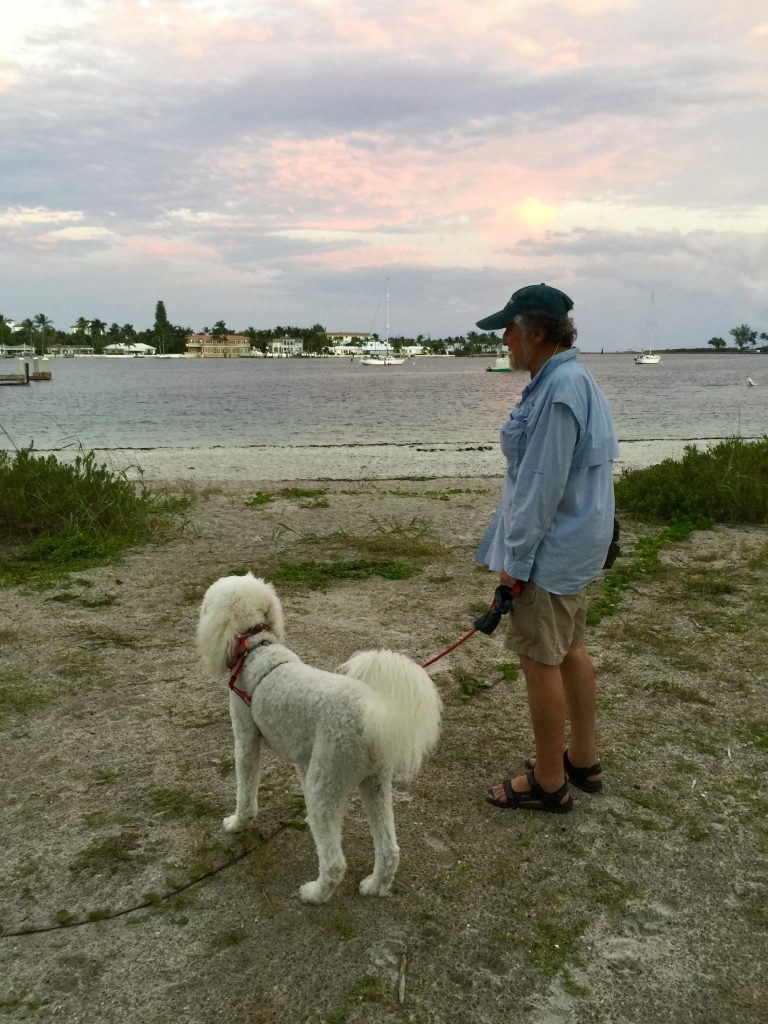 While we were going back to our boat in the dinghy we had to wait while a cruise ship that makes short trips to the Bahamas out of Lake Worth was leaving. Sailor seemed to be thinking that he might like a bigger boat to travel on to the Bahamas. 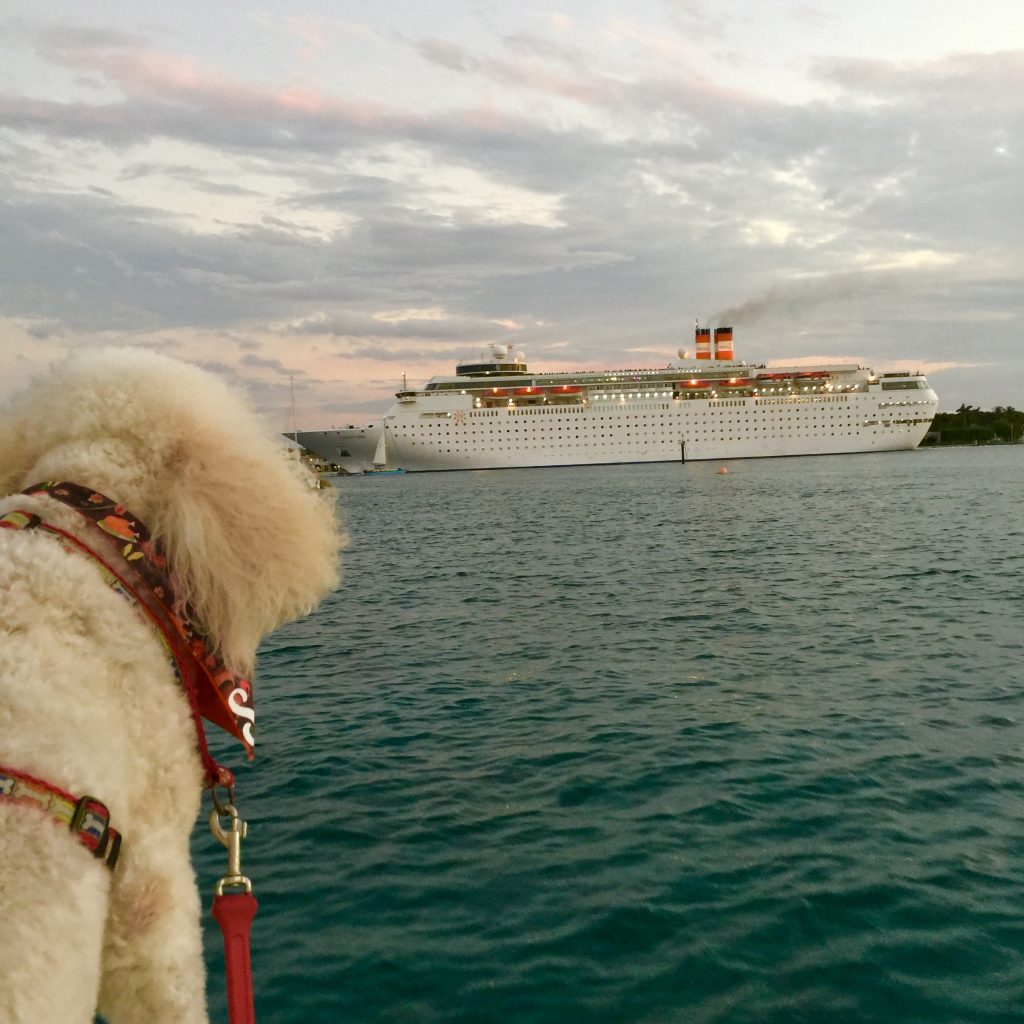 However he has to be satisfied with our sailboat. 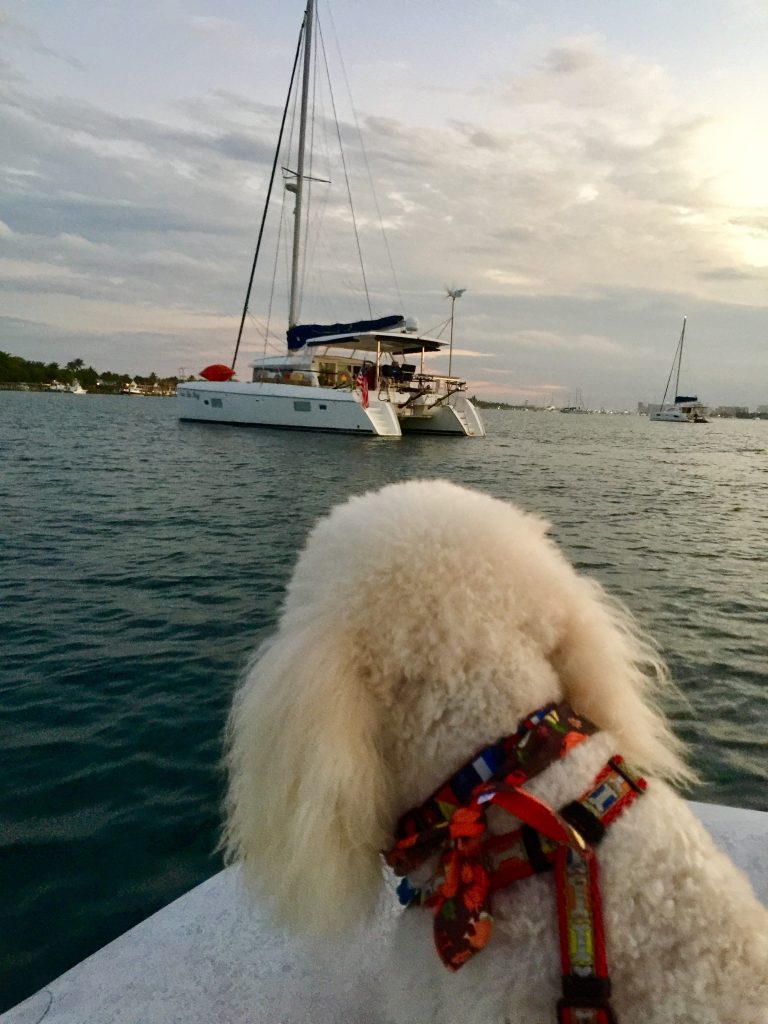 Tomorrow we will get up early and go out on the ocean to Ft. Lauderdale. The seas are predicted to be 2-4 feet and the wind is going to be following us from the north. We will stay about a mile offshore. The Gulf Stream is a few miles offshore here and with the north wind blowing against the Gulf Stream which is flowing north, the seas will be higher in it. We have reservations at the New River City Marina in Ft. Lauderdale for four nights. Hopefully we won’t need to stay that long, but the wind and seas are picking up on Thursday so we might have to wait a few days to sail to Miami. It will be the last marina we stay at, other than one in Bimini where it is difficult to anchor, until we return to Sunset Bay Marina next May.