From the first day Sailor moved aboard Seas the Day with us last September, we worried about him falling through the lifelines.  Many people with small dogs put woven rope all around their boat on the lifelines to keep their dogs from falling through. When he was small, Sailor was never alone on the deck. As he grew we figured he was too big to fit through between the lifelines. At Sunset Bay, our hurricane season port in Stuart, FL, we occasionally left him alone on the deck for anywhere from a few minutes to a few hours. (We couldn’t leave him inside because he gets frustrated and rips up paper and other items but he was fine on the deck.) He totally ignored people who walked by unless they came over to pet him.  He mostly slept while we were gone. Our deck was usually about five feet above the dock and he had to get off on a ramp we put up and took down whenever he got off the boat.

When we started moving through the water a few weeks ago, sailing south, we never let him on the deck without his life jacket on and tethered to the helm seat if he was outside while we were moving. All went well until we got to Nassau and were at the Nassau Harbor Club.  The dock was almost level with our deck, making it very easy for Sailor to get on and off but when we  undid the lifeline gate he wouldn’t jump down by himself so Mark had to lift him on and off when we took him for a walk. We didn’t leave him alone on the boat.

That night we heard a loud boom around 9:00.  Apparently the Atlantis Resort occasionally has a fireworks show for the people staying there, but they shoot them off from a barge directly across the harbor from us, quite a distance from the Atlantis.  (We discovered why the next day. All the boats in our marina, and probably all the houses and business around us and across the harbor near the barge were covered with debris from the fireworks. We assume nothing landed on the boats and hotel at the Atlantis Resort.)

Sailor has always been very alert to noises.  He often growls softly to alert us if he hears someone walking by the boat in the middle of the night.  He can be in a deep sleep anytime and wakes up if he hears something strange. He is always looking around and listening, no matter where he is. However, he has never been afraid of noises.  When the very loud fireworks started he first ran out on the deck and then came right back, seeming to be very nervous.  We went out on the deck to see what was going on and he followed us, but ran back inside.  We watched the fireworks show for a minute or two and I went back in the cabin to see what he was doing.  Sailor wasn’t inside!

It was low tide and there were about six feet between the dock and the water.  Sailor was dog paddling around the wall, but there was no way for him to get out without help. Mark climbed down a ladder and called Sailor over to him. Marinas always have ladders down to the water in numerous places on their docks in case someone falls in or has to get down to the water. Sailor swam over to Mark but it was impossible for Mark to climb the ladder with a 45 pound dog.  Three men were there to help, along with me.  Mark let go of the ladder, took Sailor in his arms and swam to the next dock where a small fishing boat had a low platform at the back.  The water was shallow so Mark could bounce his feet off the bottom.  He lifted Sailor onto the boat and another cruiser staying at the marina lifted Sailor onto the dock.

Sailor was totally traumatized.  By now the fireworks were done but he would not come back to the boat with us.  We figured out later that he must have thought the loud noises and light flashes were on our boat.  Sailor is extremely attached to us and he would never choose to leave us.  Not wanting to drag him down the dock, Mark carried Sailor all the way back to the boat.  We rinsed the salt water off him, dried him with towels and wrapped him in a blanket.  I sat on the floor with him, held him tightly on my lap, and tried to comfort him.  He shivered for about an hour, long after his body warmed up, staring out the door.  The water actually wasn’t very  cold and we worried that he could be in shock.   Finally he stopped shivering, but could not relax.  Mark slept in the salon with him and by morning he ate his breakfast and was almost back to his happy self.

We were leaving that morning for the Exumas and water was part of our dockage fee, Mark was washing the salt off the boat. Unlike marinas in the States where water is free, you pay for it almost everywhere in the Bahamas.  I got off the boat to walk across the street to buy some groceries, locking the lifeline gate behind me.  Shortly after I left, a cruiser came walking down the dock and said to Mark, “I have something for you.” Mark looked and saw Sailor trotting down the dock next to him.  We suspect he knew he could get off the boat by squeezing between the lifelines and went looking for me. Until the previous night, Sailor had never gotten off the boat without our assistance.  Fortunately there is no way to get out of the marina unless you can open a door that goes out to the street and he hasn’t learned to do that…….yet.

Of course, this was very scary for us.  We were lulled into thinking Sailor would not get off the boat without us. After living on it for six months he had never even tried to jump off.  We can only assume he saw the opportunity because it was level with the dock, even though he had to squeeze through the lifelines.  Fearing the very loud fireworks sound, he was no doubt terrified enough to do anything to escape.  At the time we thought he was inside and other than hearing the sounds, we didn’t know he was afraid of them. The second episode was probably Sailor learning a new “trick” and he wanted to come with me.

We thought we were doing everything possible to keep Sailor safe, but it wasn’t enough.  We are extremely fortunate that there was no way to get to the street on the day he tried to follow me because no doubt he would have run right in front of a car.

After being traumatized by the fireworks sound, Sailor is now afraid of our Shark cordless vacuum.  Today while I was vacuuming up sand he brought in from the beach, he jumped up on the couch and left by the window.  Yes, that is a trick our little escape artist has learned.  He’s pretty big to be going out the small window, but he manages to climb up on a shelf and out.  He comes in the same way!

We feel so very fortunate that everything worked out in Sailor’s favor.  The security guards saw him go in the water.  If not for that, we would have been looking all along the dock and maybe wouldn’t have even seen him if he had swum under a dock. In fact, we might not even have known he had fallen in and we would have looked on the marina grounds.

Sailor is adjusting extremely well to sailing.  Each day he learns something new.  He very quickly learned to love riding in a dinghy.  Whenever he hears the dinghy starting to go down into the water, he is at the top of the sugar scoop steps ready to jump in.  The first time he was on a beach, in Bimini, he ate sand.  He actually put his mouth down into the sand and filled his mouth with it.  It made him sick for a few day but he hasn’t injested it again.  He learns fast. We know many dogs are afraid of fireworks, but we’ve never owned a dog who was terrified like Sailor obviously is.

Some people wonder why cruisers bring a dog on a boat.  Sailor is part of our family and we wouldn’t enjoy this experience as much without him. When our wonderful Goldendoodle Daisy died last summer, after living aboard with us for five years, we mourned her, but within a few weeks since we had never not had a dog in our lives, we decided to find another Goldendoodle.  In the end, dogs want to be with their people and with some adjustments, they can be just as happy living on a boat as they are in a house.

Below are a few pictures of our little escape artist coming in the window and relaxing after running up and down a deserted beach in Staniel Cay, the Bahamas. 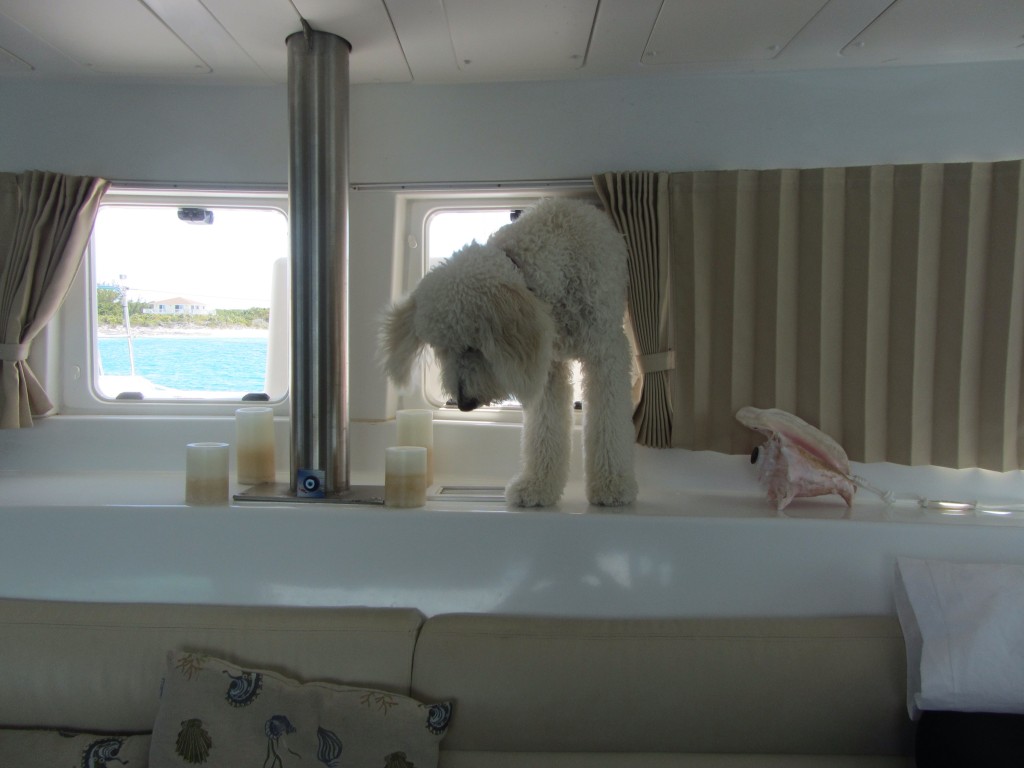 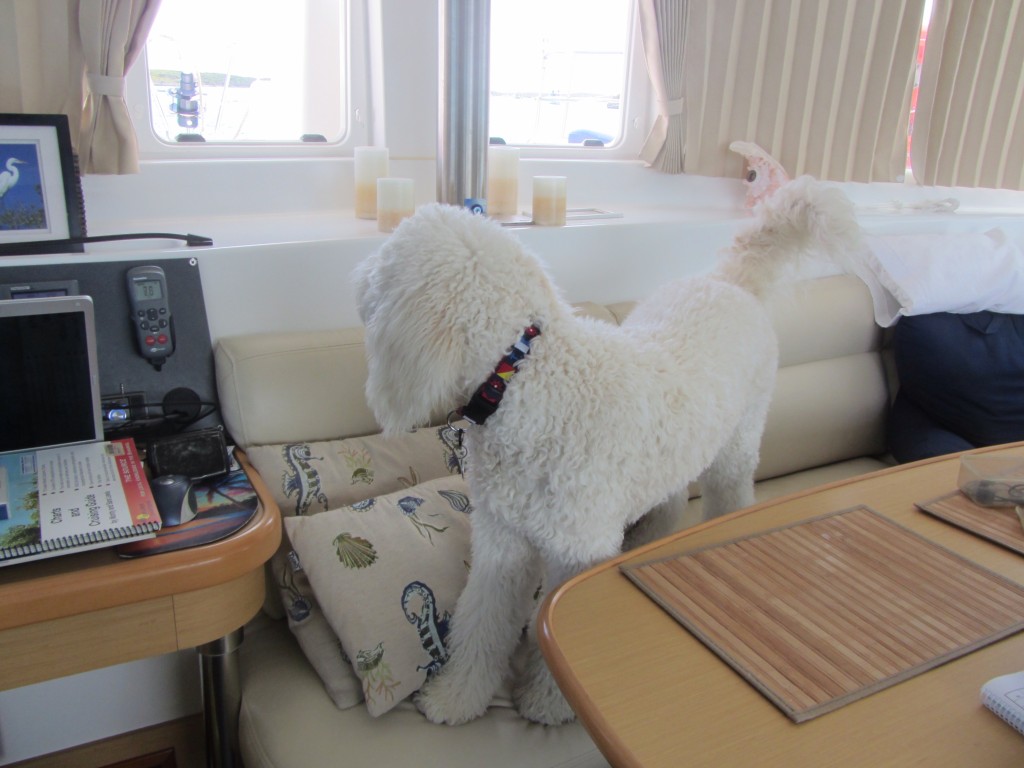 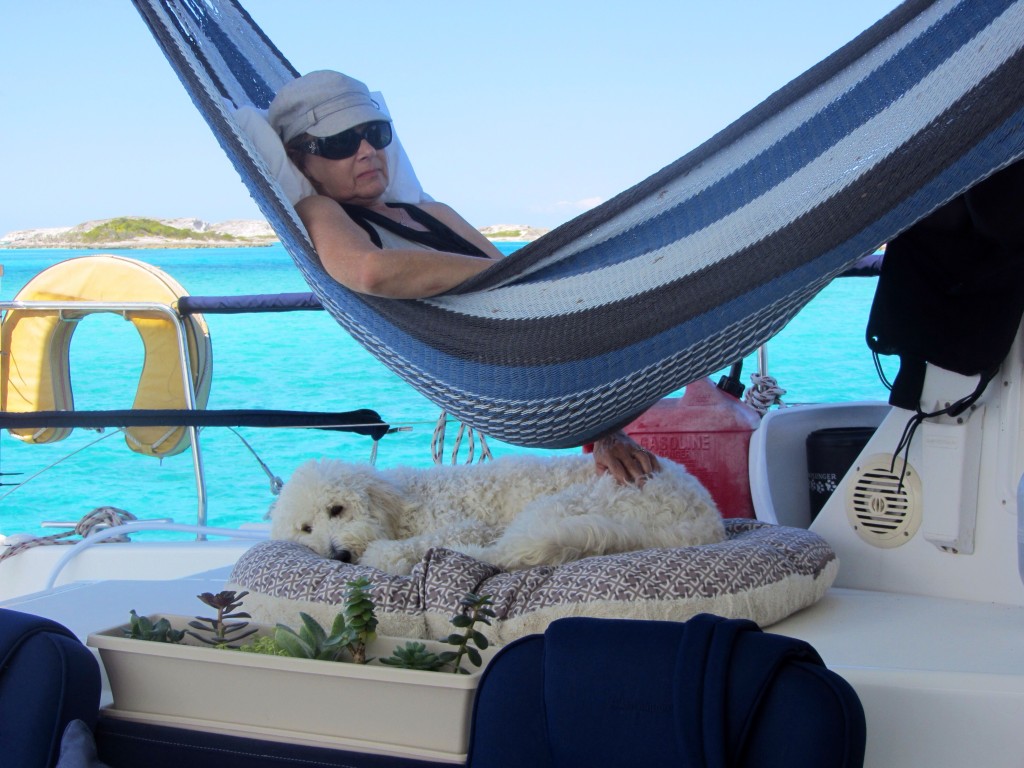