We arrived in Lake Worth from Bimini on the Saturday of Memorial Day Weekend and were not looking forward to the speeding boaters in the ICW on one side of Lake Worth and in the channel next to the anchorage on the other side. However being able to go to nearby Peanut Island is worth the time spent in the rocking anchorage. The island is a fantastic park with a paved walkway that winds through palm trees and other vegetation.  It is a very popular area for the locals to come to on weekends and holidays, with Memorial Day Weekend being particularly crowded. Many visitors come by small boats and water taxis bring people to the island from Riviera Beach or Palm Beach. There is a tent campsite and numerous covered picnic areas as well as areas to swim and snorkel.

Palm Beach is home to large estates with ocean beaches on the east side and Lake Worth on the west side. The Lake Worth inlet is a popular one for cruisers to leave from to go to the Bahamas  and to return to at the end of their trip. Peanut Island is located just inside the inlet.  The western shore of Lake Worth near the anchorage we are in is mostly industrial.

After anchoring near the inlet, we took the dinghy to Peanut Island and on the way passed a large wooden vessel at a dock in front of one of the houses where a party was taking place. A closer look revealed she was the yacht used by five presidents.  John Fitzgerald Kennedy spent the Christmas and Easter holidays on this yacht and in his Palm Beach home. During the summer months she  was docked in Cape Cod. Each president could change the name of the yacht and Kennedy christened her Honey Fitz, after his maternal grandfather Boston mayor John Francis Fitzgerald, whose nickname was Honey Fitz. The yacht is now privately owned and can be chartered, renting for $5000 for four hours.  She is docked at a marina in West Palm Beach, but retains her home port as Washington DC.  There is a presidential seal on the smokestack and the Honey Fitz is decorated with memorabilia from the five presidents who used the yacht. It’s worth a Google search to find out more about her fascinating history. 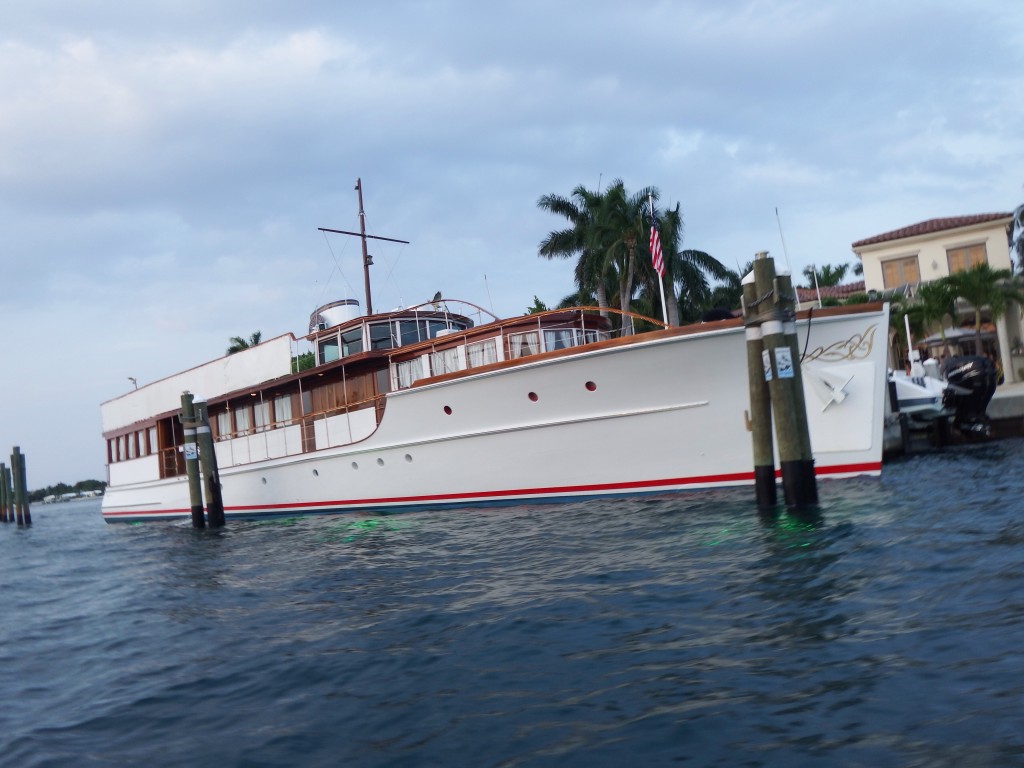 The Kennedy family had a vacation home in Palm Beach purchased by JFK’s father in 1933. During the 1960’s it became the winter White House. A bunker was built on Peanut Island as a fallout shelter for Kennedy shortly before the Cuban Missile Crisis. The Kennedy bunker is now open for public tours. When we were in the Bahamas, we met a couple who live on Lake Worth next to the anchorage we are presently in and were cruising in the Bahamas in their yacht.  They told us about the bunker and the local rumor that it was used by Kennedy one time, when he took Marilyn Monroe there! Three feral cats live on Peanut Island now and are named Jack, Jackie, and Marilyn.

In the early 2000’s Peanut Island underwent a massive construction project which converted it to the beautiful park it is today.  It was completed in 2005 and the photos below describe the changes.  (If you click on the photos of the posters, they should become large enough to read. Poster were under glass, so it was difficult to get a clear photo.) 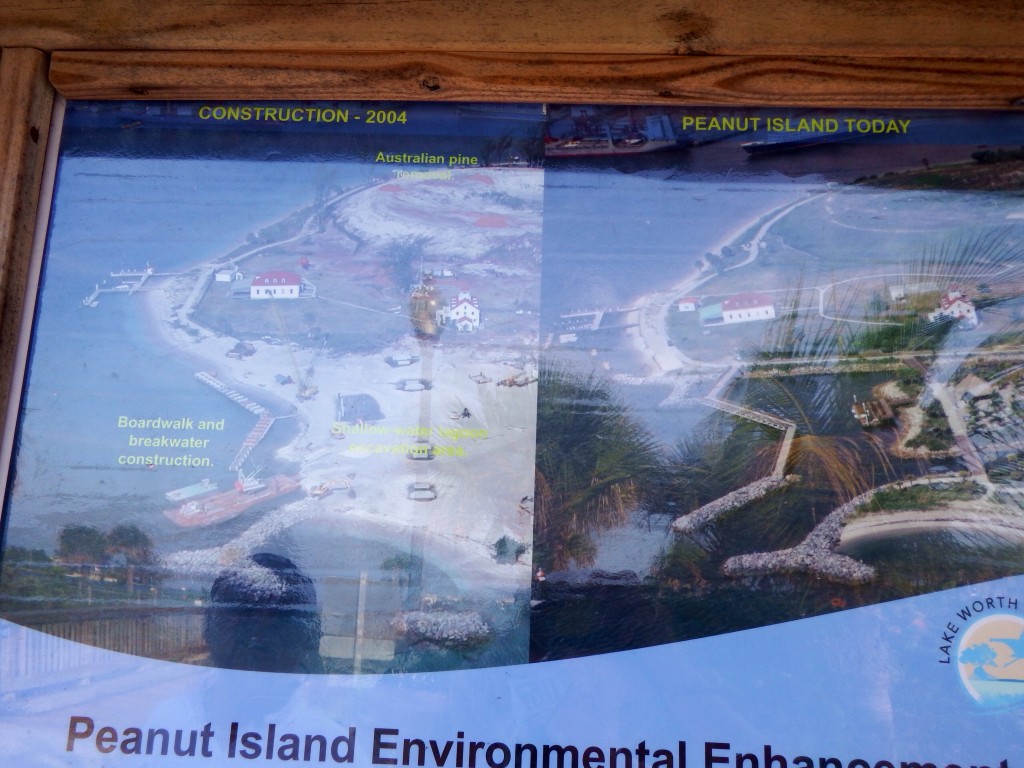 Here are more pictures of our visit to Peanut Island.

Visitors line up on the dock to take water taxis back to Palm Beach or Riviera Beach. The docks are free to use during the daytime and small boats can also anchor near the shore or pull up on to the beaches, except the ones designated as swimming areas. The wide walkways and bridges run along the shore and weave through the interior of the small island. 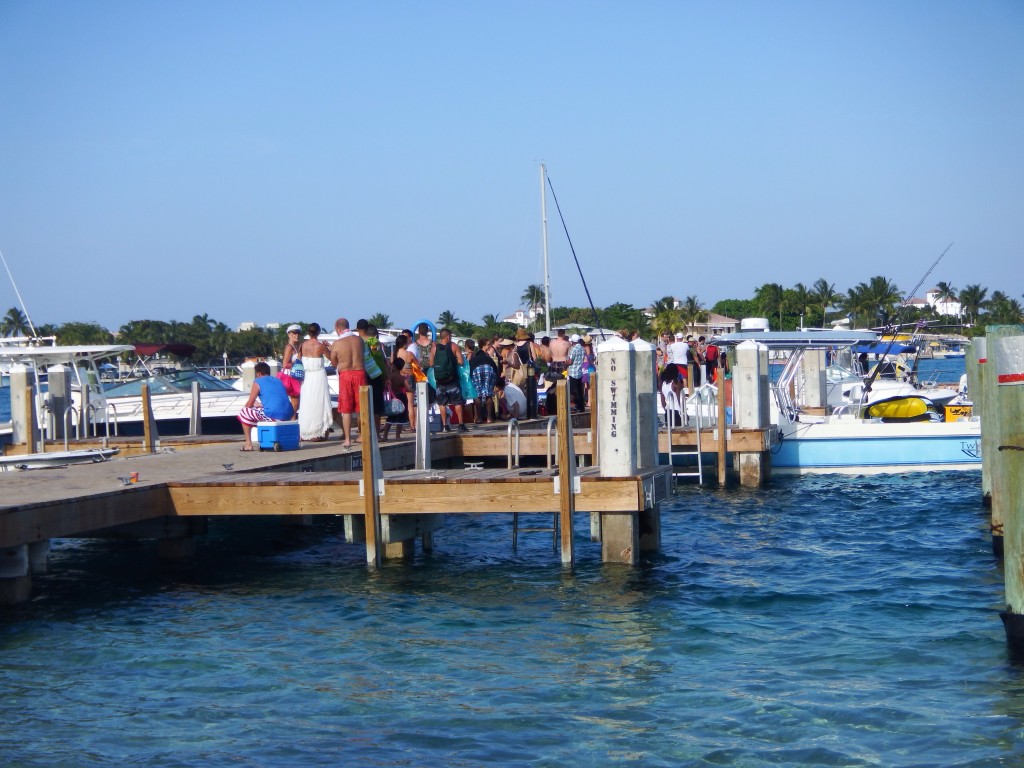 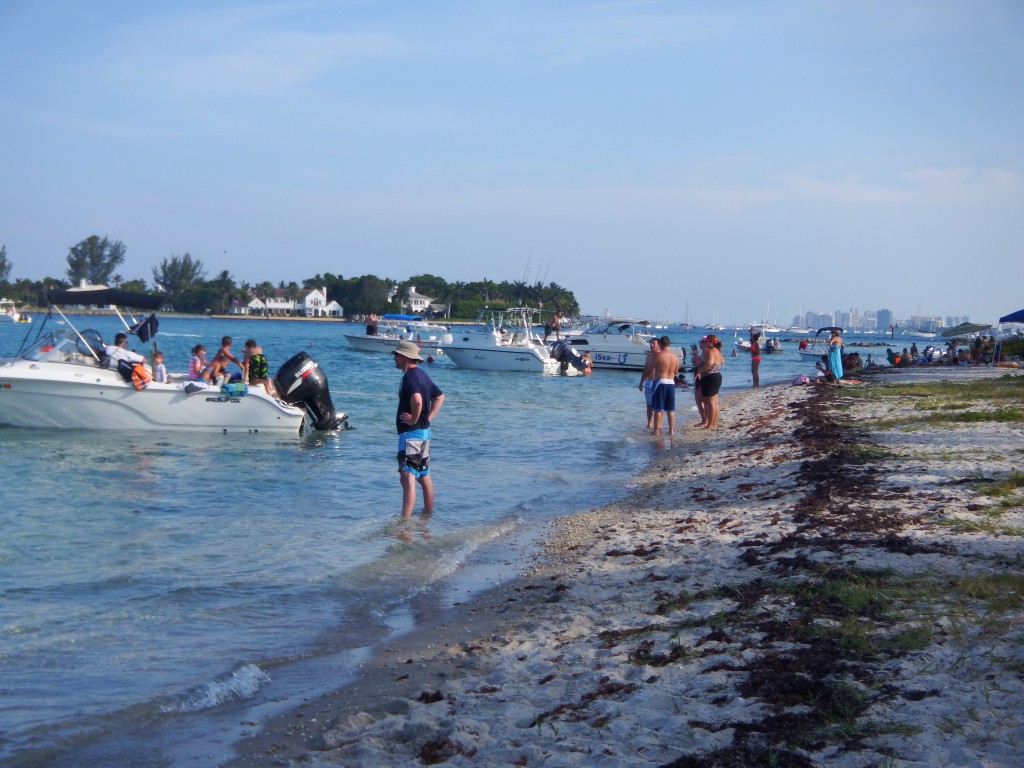 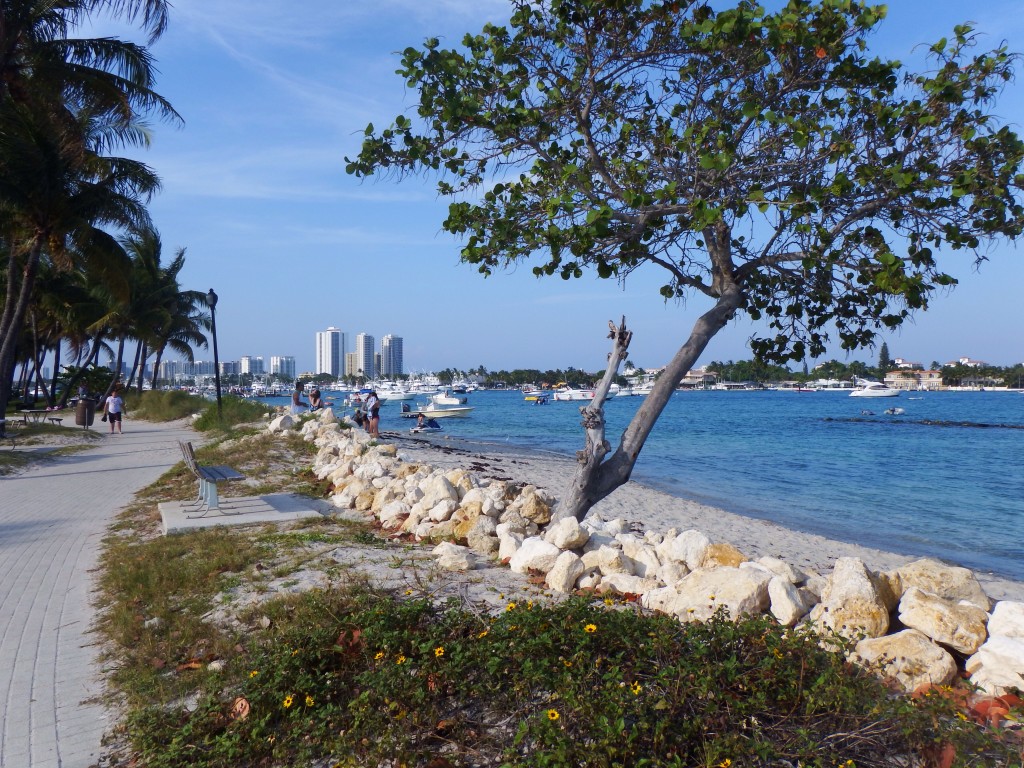 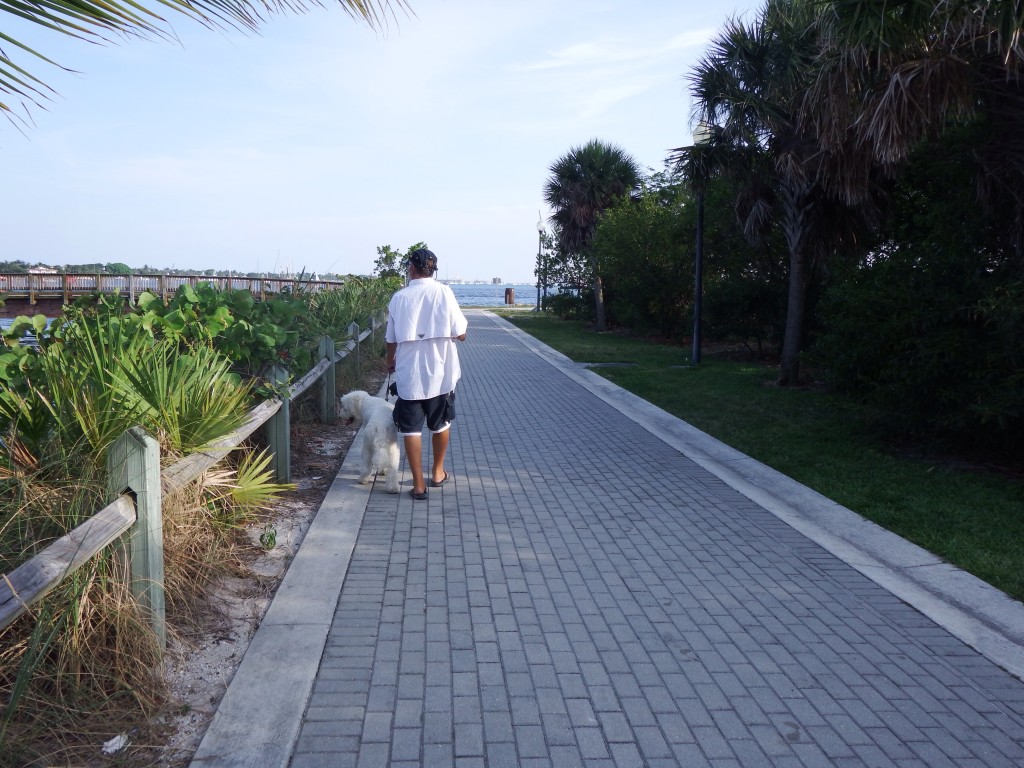 This is the bunker built for President John F. Kennedy. The entrance is through a small tunnel. 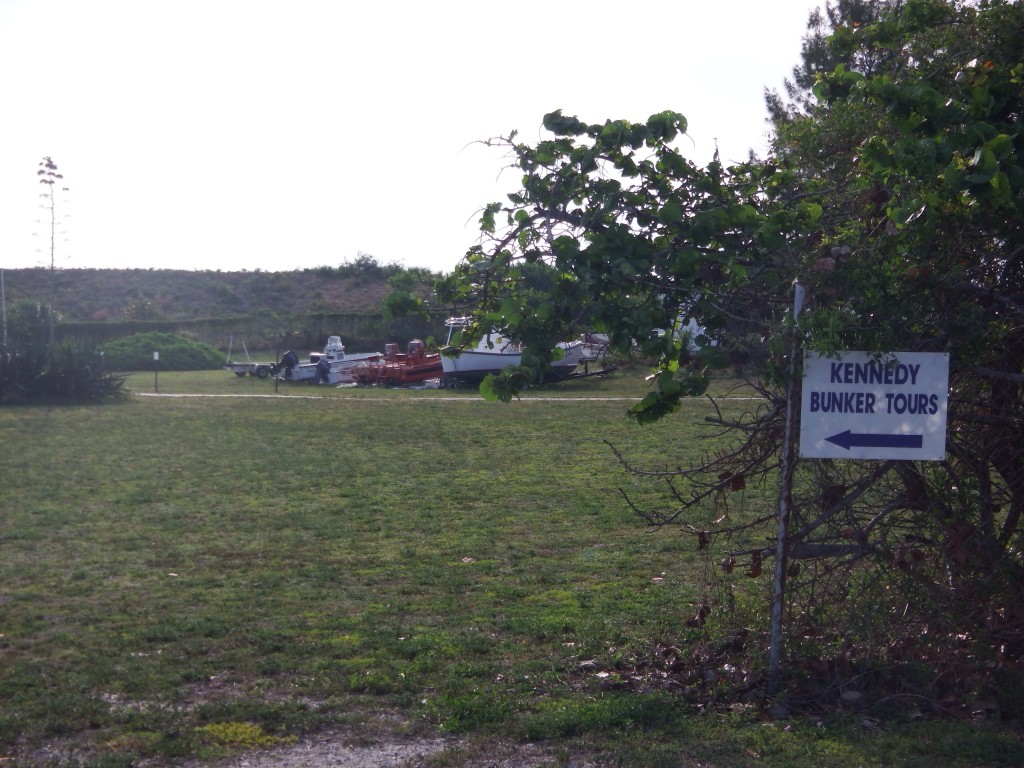 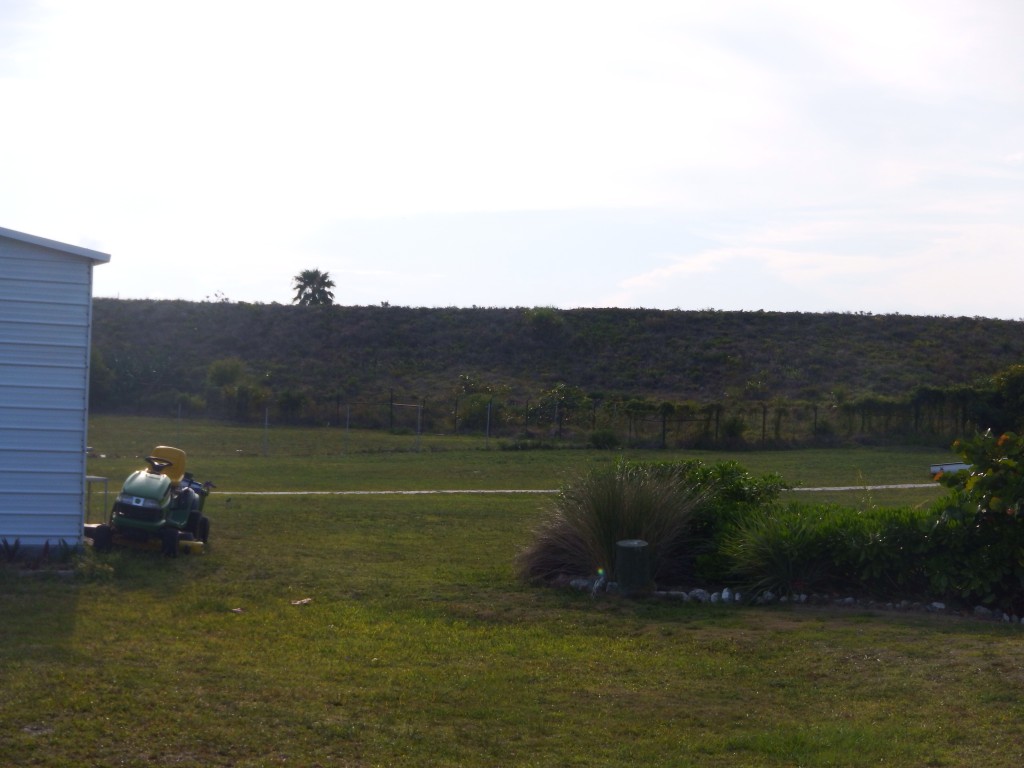 I suspect that reservations for this tent campground are made at least a year in advance for Memorial Day Weekend. It was full all weekend, but completely empty by Monday afternoon.

There are numerous places to snorkel around the island. During the construction process, reefs  were added where many varieties of fish can be seen in the crystal clear water. 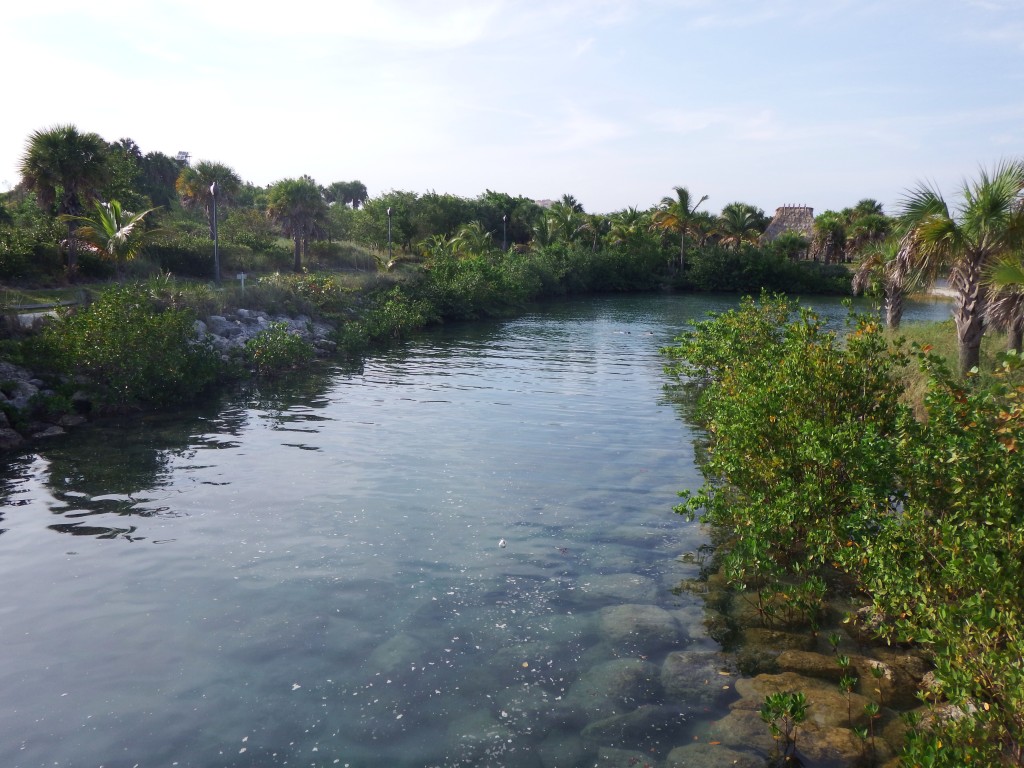 Peanut Island is very dog friendly. When we stopped here on our way to the Bahamas in early March, Sailor was afraid to go in the water by the docks. He had never been swimming and ran into the water without realizing it was wet! Realizing his mistake, he raced to get back to solid land.  This time, he enthusiastically fetched his wubba. He learned to love the water during his three months playing on many beaches in the Bahamas. 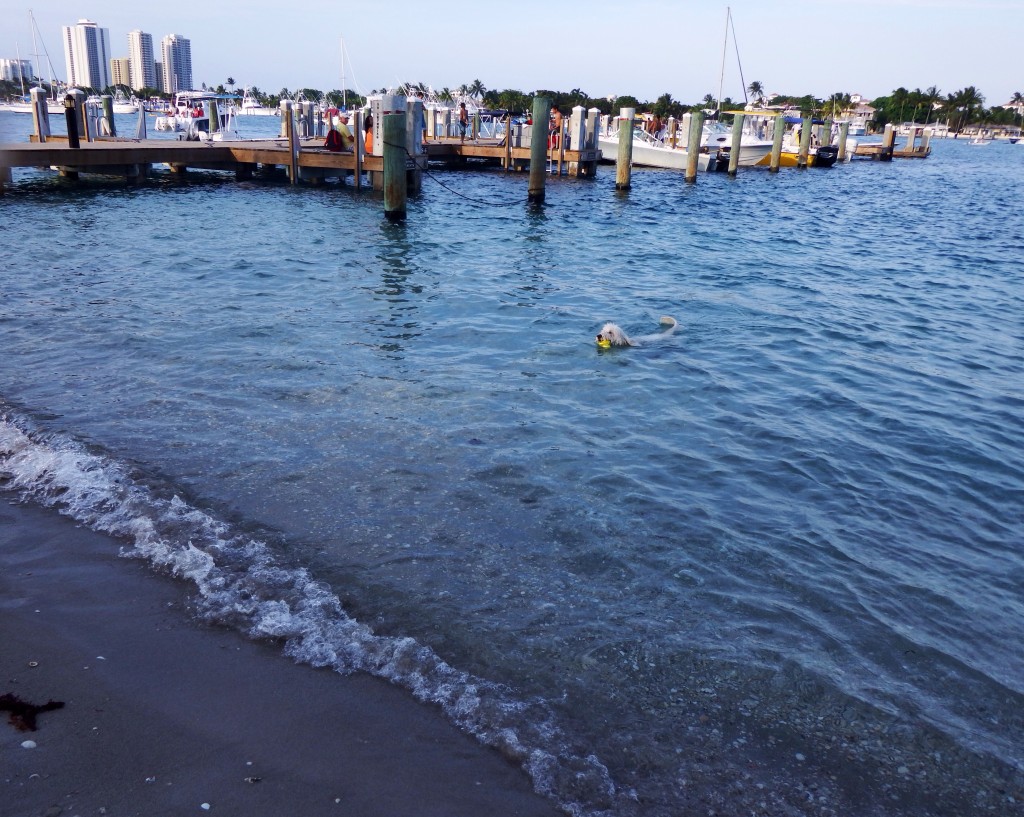 This is one of the covered picnic areas which are placed throughout the park. 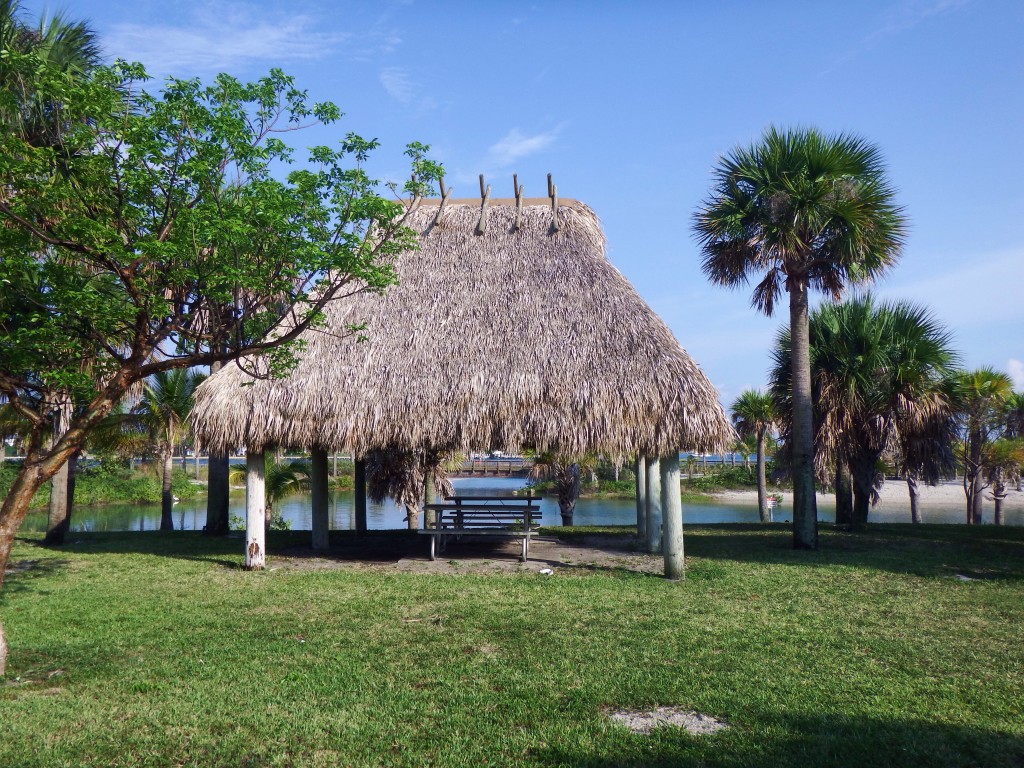 The pond where Sailor swam and the tiki hut picnic area were empty every time we went to Peanut Island. There are several other beaches on the lake shore of the island which have lifeguard towers  and were crowded with swimmers. 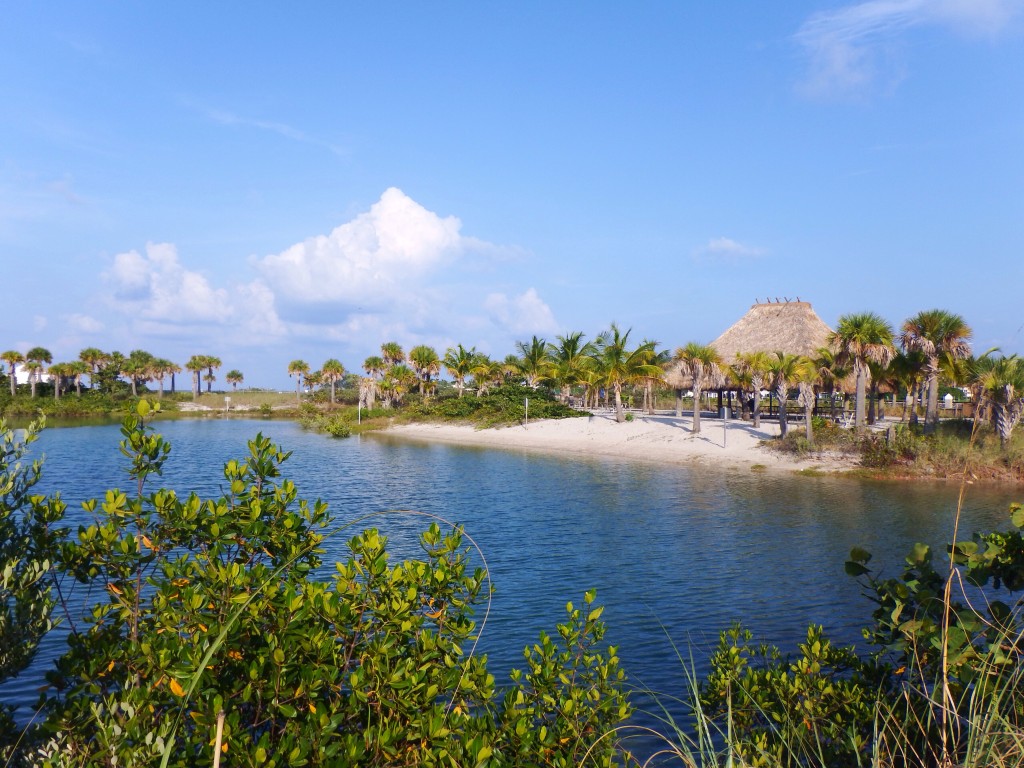 While Sailor was in the water, a kayaker paddled by with his dog on the front.  They noticed each other but wisely did not try to get together. 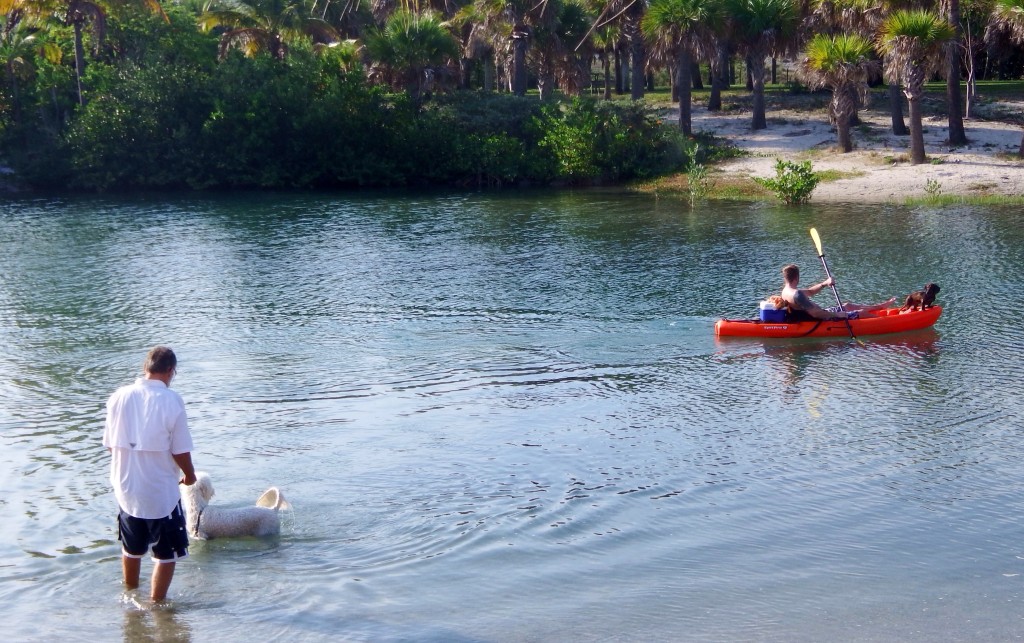 After walking and swimming, it was time to rest on a bench and watch the busy boat traffic go by, including the Bahamas Celebration Cruise Ship which was leaving the Lake Worth Inlet for a two night cruise to the Bahamas. 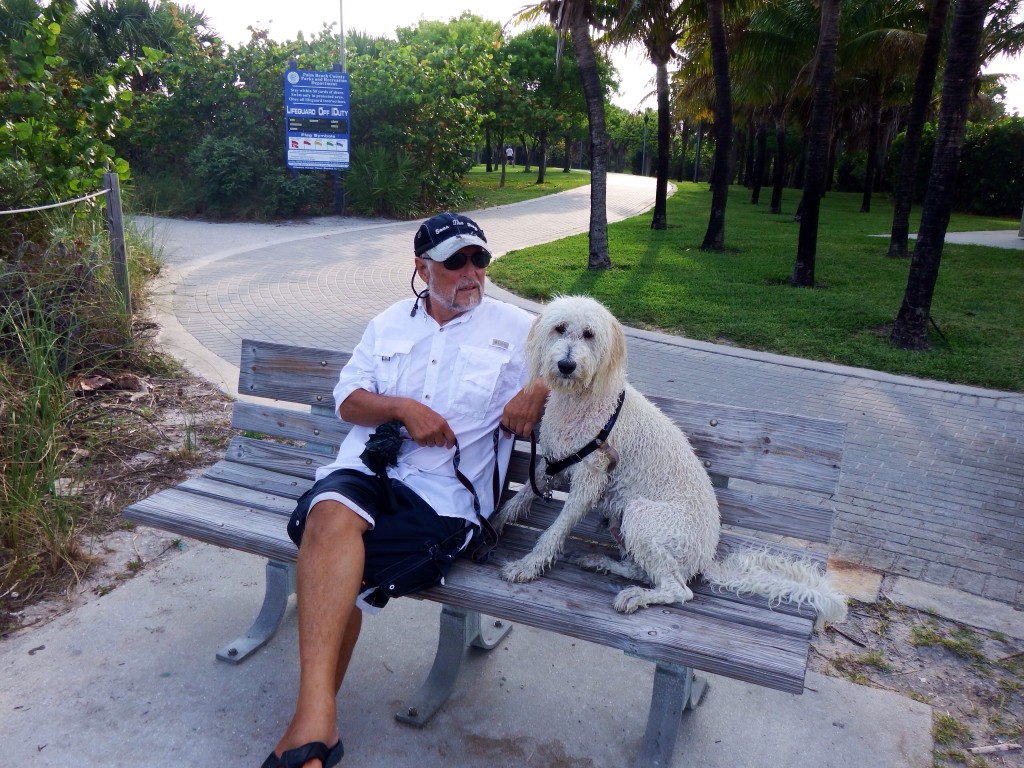 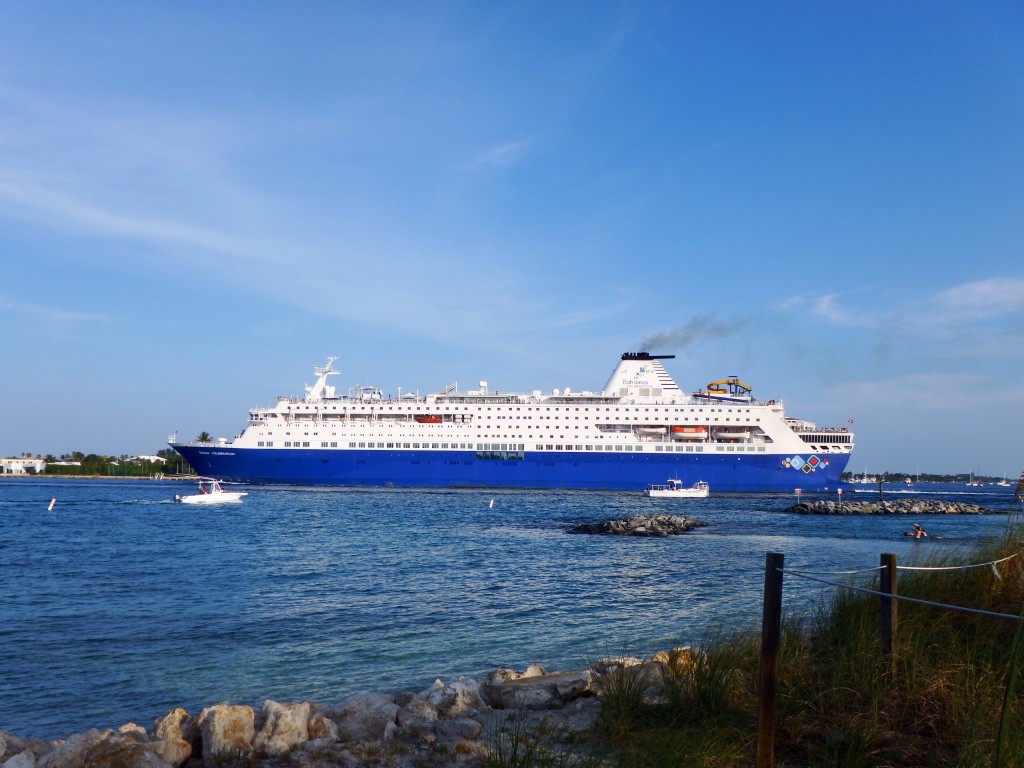 We are staying in Lake Worth through Tuesday, when we will raise our anchor and go the short distance across the lake to Cracker Boy Boatyard where Nance and Underwood Riggers will remove our sails, unstep the  mast, and bring them to Ft. Lauderdale to store until we have them put back on again at the end of hurricane season in November.   On Wednesday we will take the final leg of our 2014 cruise back to Sunset Bay Marina in Stuart, FL.