At 0605 on 11-14-16 we released mooring ball 58 at Dinner Key Mooring Field and motorsailed  across Biscayne Bay to the channel entering the Atlantic Ocean, beginning our fifth cruising season in the Bahamas. The seas were predicted to be calm, but with minimal wind for sailing. Unfortunately, we were headed right into what little wind there was and it was just choppy enough to make the ride uncomfortable. In other words I spent most of the morning in bed with Sailor. After several hours, a loud alarm went off to alert us that one of the engines was overheating. We turned that engine off and continued on with one engine until it cooled down. Mark checked it and added more coolant. The engine started up and ran fine the rest of the trip. This has never happened to us before, so it was a bit worrisome. I was very glad we were on a catamaran with two engines. As we approached Bimini, the seas smoothed out and we arrived at 1400 in Bimini Sands Marina and Resort.

Sunrise as we left Miami.

Seas the Day at Bimini Sands Resort and Marina 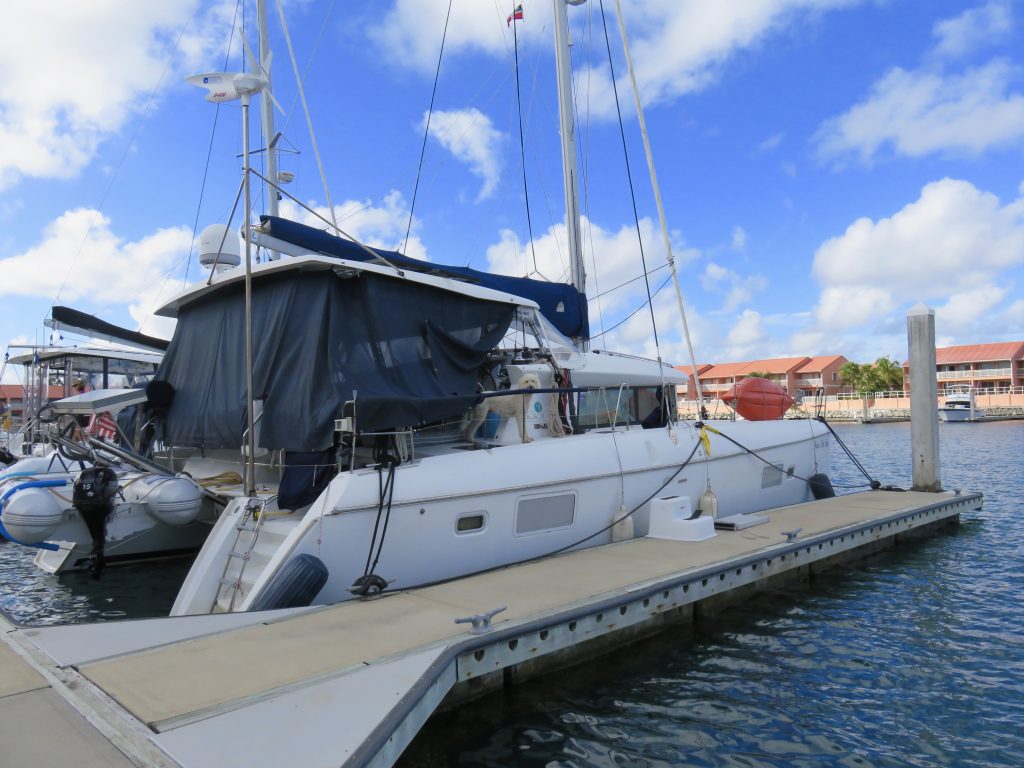 We had been been looking forward to having a delicious seafood pizza at the Bimini Sands Beach Club Restaurant, but sadly it has closed. Also, the entire resort is closing at the end of November. The marina will stay open until March, but unless someone buys it, the marina will also close. There are condos at the resort, and the owners will be able to use them, but the restaurants will be closed and they can’t rent their condos. I’m sure many of the condos  were purchased to be rentals but there will be no one on the property to handle them. Not good news! We have enjoyed this marina because it is on South Bimini, away from the noise and activity of North Bimini. Also it has two pools, restaurants, very nice floating docks, and a beach next to the marina. The North Bimini marinas have a very busy channel on one side and a busy street on the other. A water taxi connects the two islands.

At 0440 on Tuesday, November 15, in the pitch dark, we left Bimini Sands to motorsail to the Berries. Usually we stop and anchor at Chub Cay (pronounced Key), but the weather was going to deteriorate on Wednesday until at least the weekend. Therefore we decided to go to Great Harbour Cay Marina in the Berries. It is a little closer than Chub Cay and the entire trip is on the shallow Great Bahama Bank. The sky was cloudy, but the water was as smooth as glass. 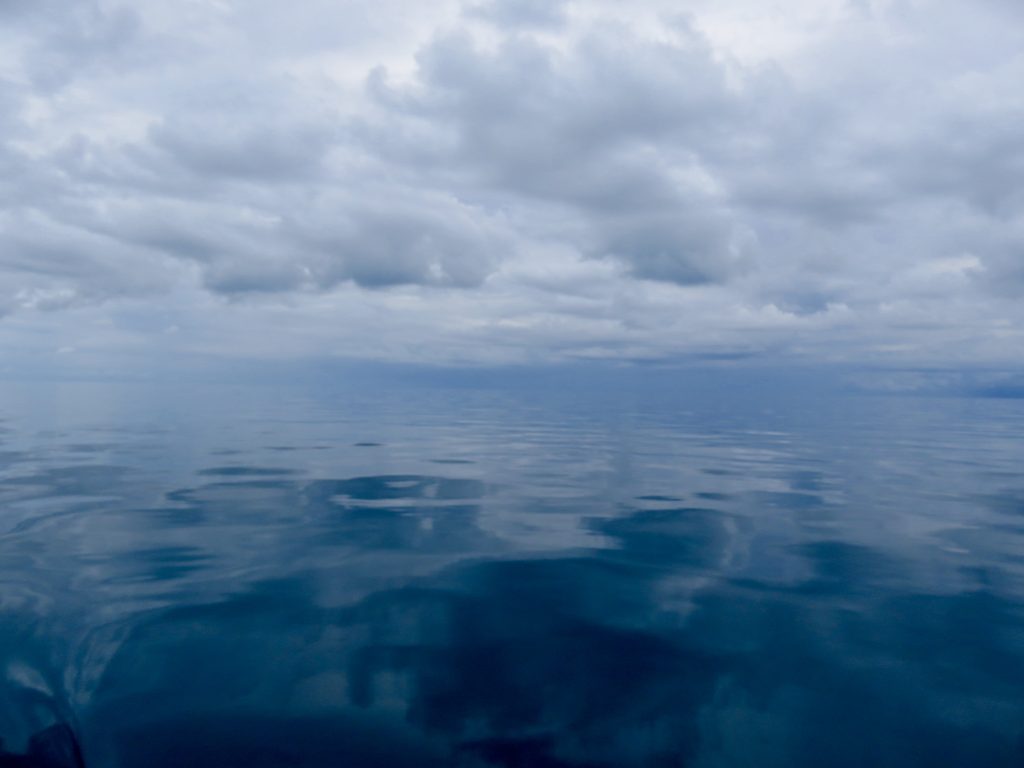 A few hours before we reached Great Harbour Cay, it started to rain. It was a gentle rain, not a squall or a thunderstorm, and it continued to drizzle as we entered Great Harbour Cay. We knew from the charts and talking to other cruisers that it would be dangerous to enter the marina after dark. There is a channel with high rock sides and several sharp turns before eventually entering the marina. Many cruisers get to the Cay and then anchor outside the entrance until daylight. We arrived at 1620 with plenty of light and were directed to a wide slip. This marina has become very popular over the past few years after the owner of Active Captain, a site where cruisers rate and review anchorages and marinas, spread the word on his Facebook page, email to Active Captain subscribers, and other social media than this is THE place to stay in the Bahamas. Other cruisers agreed and now it is impossible to get a reservation here for the winter without booking many months in advance. When we arrived, there was only one other boat with people on it and a few sportsfishers and trawlers with no one aboard, although more boats have come in each day. We found out that some of the fishermen fly leave their boats here and fly in to the Great Harbour Cay Airport.

It is clear why this is a popular cruiser destination, where many stay for the entire winter/spring season. From our first contact on the phone with a receptionist through the check-in process, the staff was polite and professional. We were told our slip number before we arrived, which is rare at most Bahamian marinas. Even in Nassau, as you are calling them from outside the marinas to let them know you have arrived, they figure out where they’ll put you. Once we were guided into a slip at a Nassau marina that got narrower as we proceeded and we almost got stuck in it before quickly backing out! We always make reservations at least a day ahead once we know which day we can get to a marina. Movement in the Bahamas always depends on the weather.

During the season, when the marina is full, there are many activities here. We saw yoga mats in a storage shed and the professionally made information booklets we received spoke of art classes, exercise classes and more. Even now with few people here, we can get homemade bread delivered to the boat every other day, homemade pizza delivered to the boat at the time you choose on Thursdays, and a  Bahamian BBQ meal on Fridays for $10. The booklets showed detailed maps of the local places to snorkel and where to take a dinghy into the mangroves. A long walk, or short bike ride on free marina bikes, brought us to a seven mile long sugary sand beach extending along the north side of the cay. 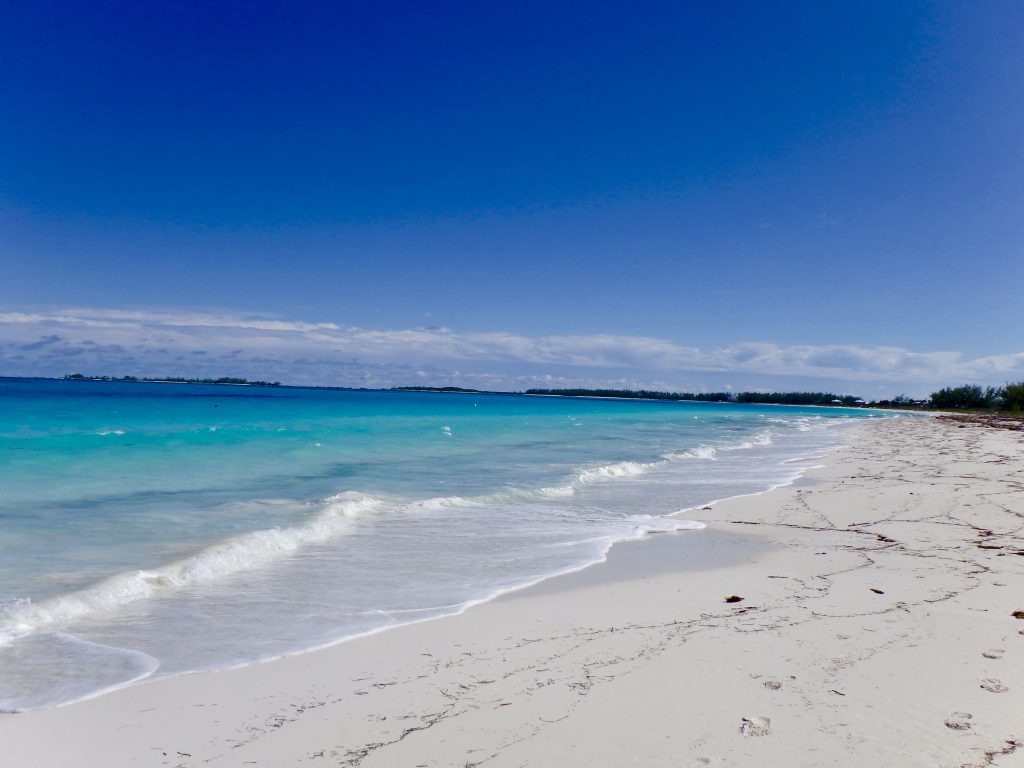 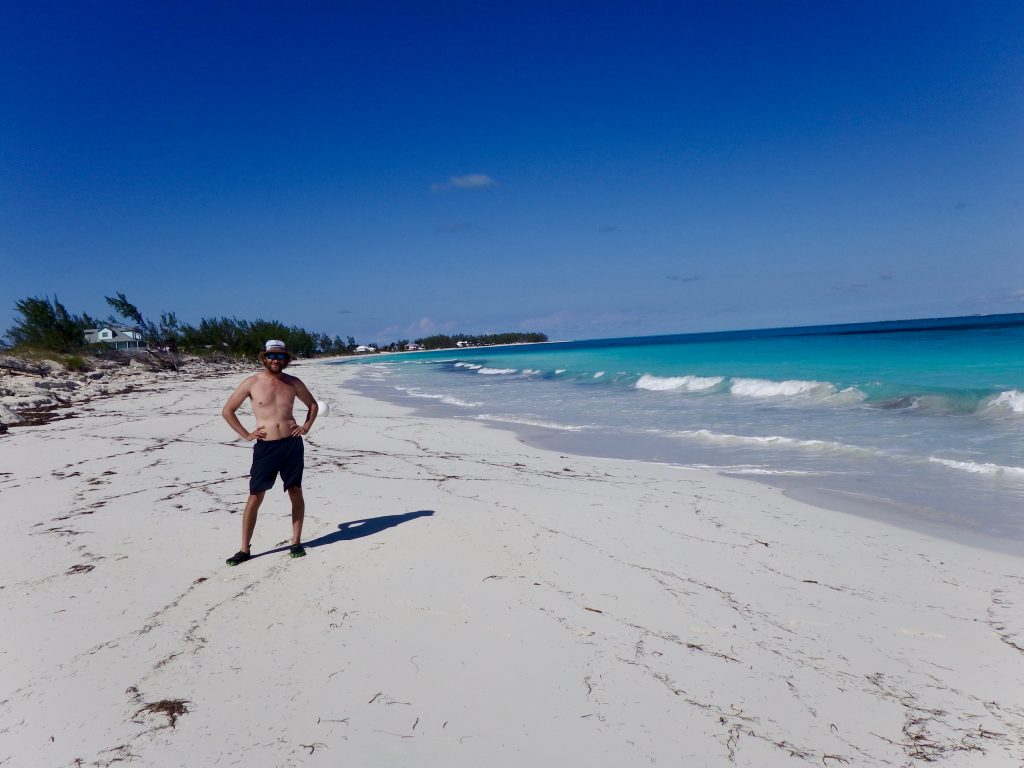 There is a grocery store next to the marina and a Batelco phone store walking distance down a paved road. Every day fishermen come in and guests at the marina can get fresh fish or lobster. The free wifi is very fast with four towers around the marina. There are three showers/bathrooms which are very clean and modern and several more are being built. It’s nice to be plugged into shore power, although it is billed at 75 cents per KWH. There is well water at our slip that is free to wash off the boat and RO (reverse osmosis) drinking water from another hose at our slip for 50 cents a gallon. There is also a fuel dock at the marina.

My son used a bike today and went up and down the roads of Great Harbour Cay. He took the photos below showing the beautiful scenery. 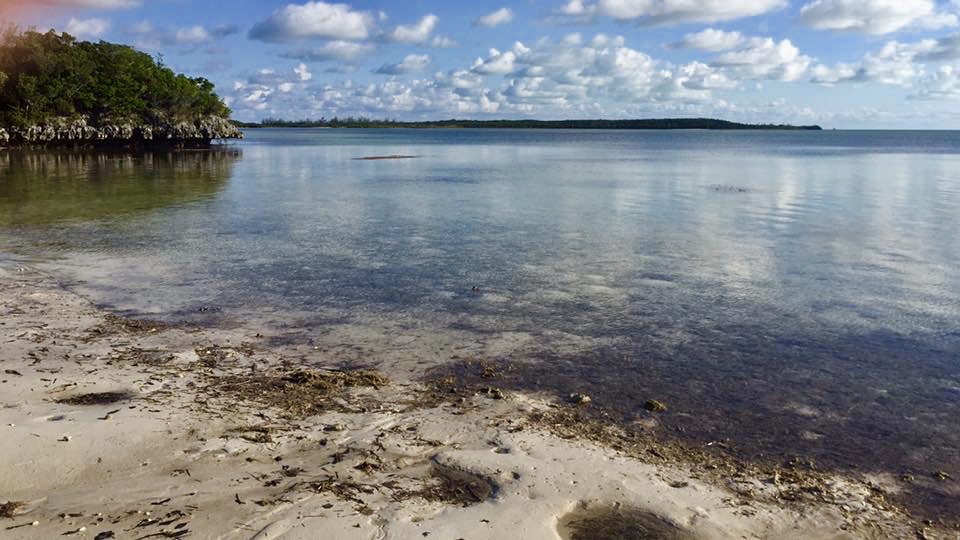 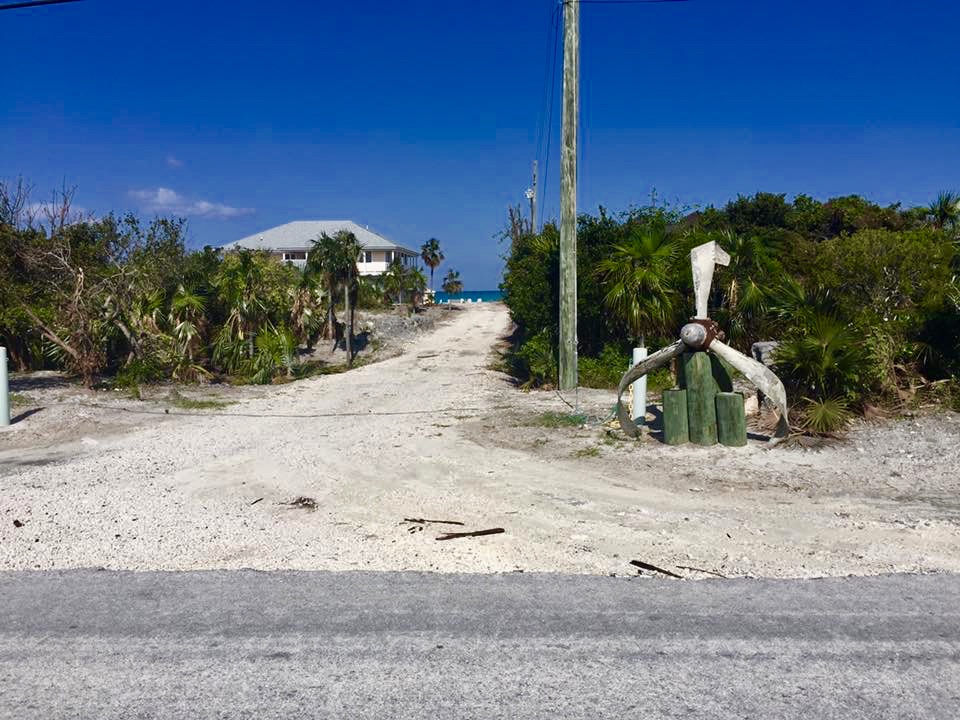 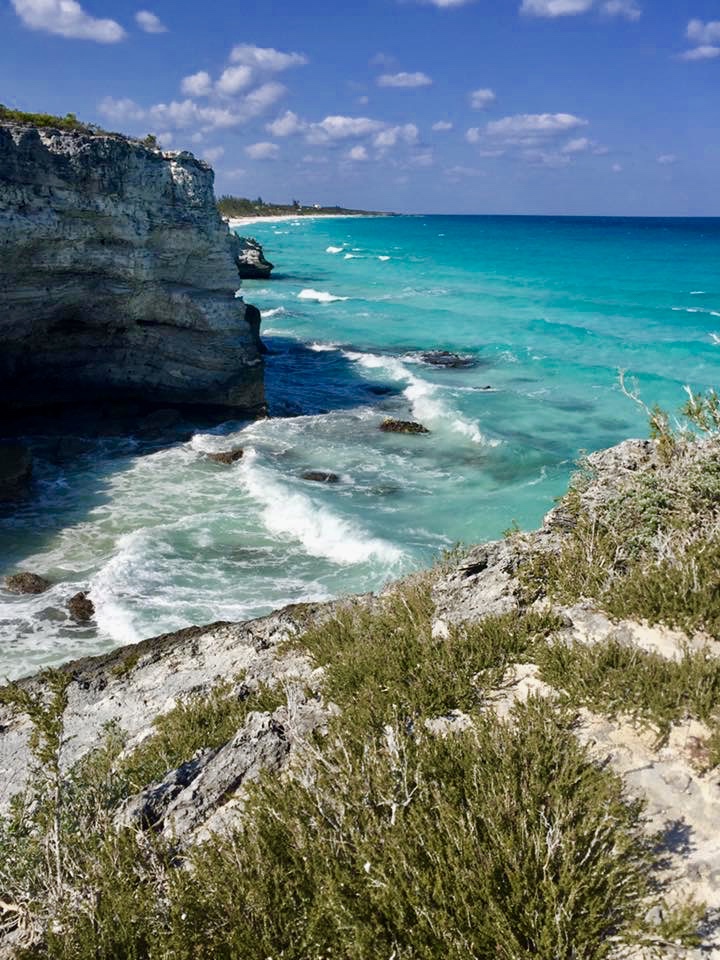 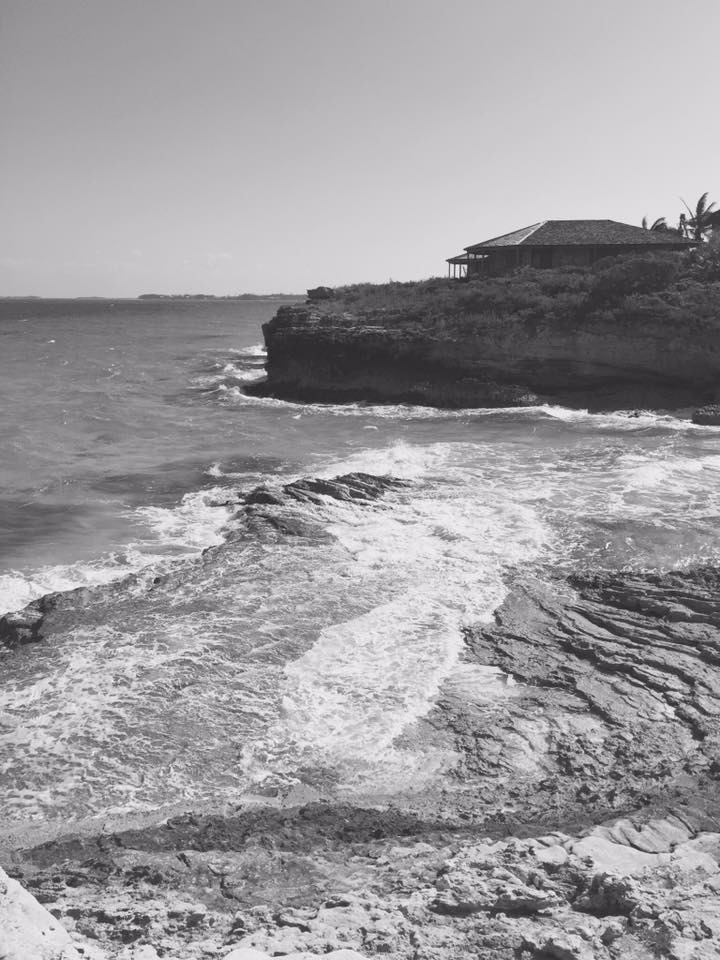 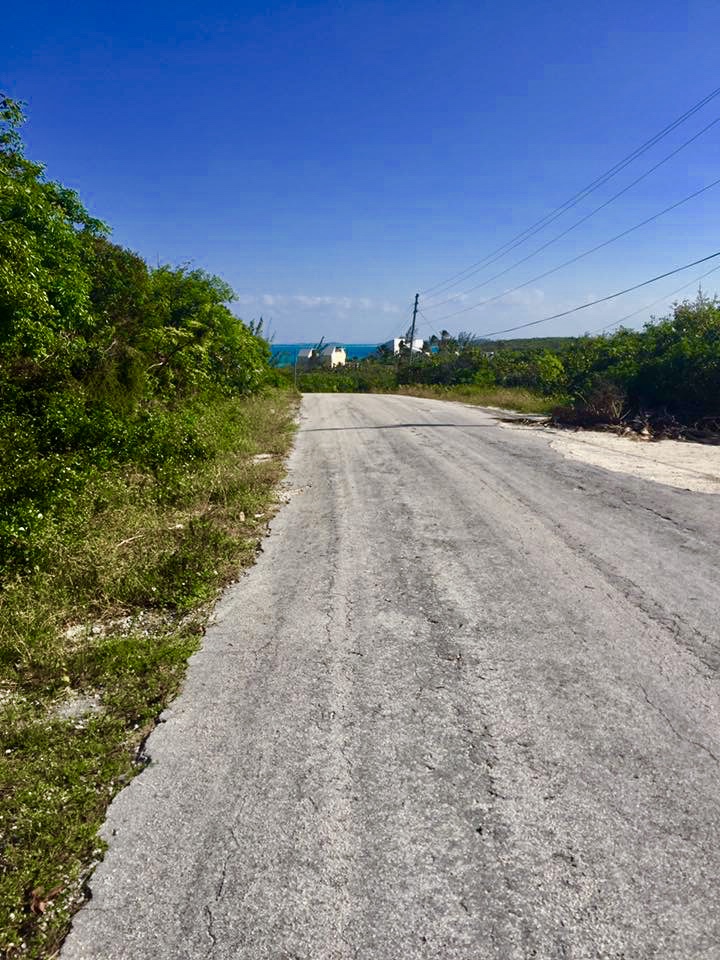 After Pete got back from his bike ride, Sailor was playing with his toys on the deck. He is not allowed to do this but often sneaks one or two out to his bed. We noticed that his hamburger toy was missing, and sure enough it was floating away from the boat. Mark thought about putting the dinghy down but Pete offered to jump off the dock and swim for it. He did, got the toy, and returned it to a relieved Sailor. 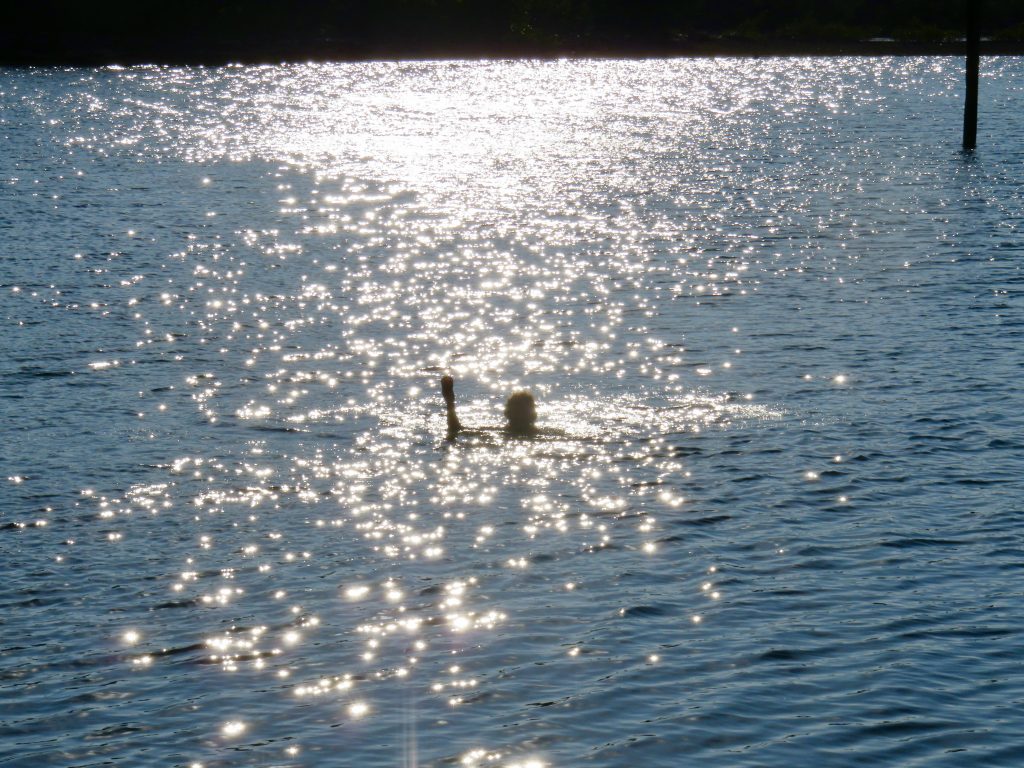 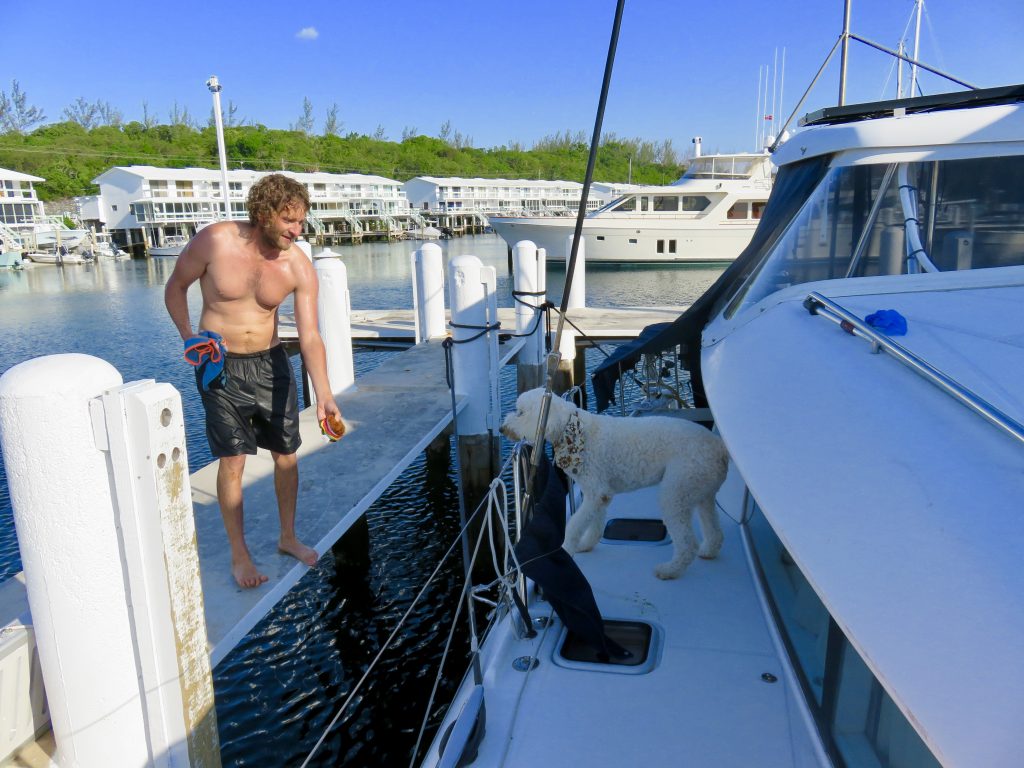 This morning, we listened to Chris Parker, the marine weatherman we subscribe to, and found out that Saturday and Sunday will be our best days to get to the Exumas. Sunday night another front is coming through the Bahamas. Therefore, on Friday we will leave the marina to anchor nearby. We’ll sail early Saturday morning to Nassau, spend the night at Nassau Harbour Club Marina, which just happens to be across the street from our LAST Starbucks until June, and sail to Norman’s Cay or Shroud Cay in the northern Exumas on Sunday. The sail to Nassau is on deep ocean water, so even with mild wind, it might be rough. Once we leave Nassau, we are on the shallow Bahama Bank all through the Exumas until we have to go on the Exuma Sound for one day to reach Georgetown.

On Thursday, our last night at Great Harbour Cay Marina, we enjoyed homemade pizza delivered hot to our boat. We ordered two: a lobster/conch pizza and a special with “everything” on it. They were delicious! We did get our seafood pizza after all. I planned on taking a picture when they arrived but we were so hungry I forgot until the leftovers were in the refrigerator and freezer. Leftover pizza will be great to nibble on as we travel over the next few days.  Next stop, Starbucks!