We left Lake Worth at 0645 on Tuesday, November 21, 2018, and arrived at Slip 4 on the New River Docks in Ft. Lauderdale at 1340. We arrived at 1240 at the 17th St. Causeway Bridge just around the corner from the inlet and went under the bridge at the next opening at 1300. It took us forty minutes to get to the New River Docks and tie up at along the sea wall just before the 7th Ave. bridge. We had to request two bridge openings on the New River and luckily got under the railroad single bascule bridge five minutes before it closed for a train. We went a total of 51.86 miles in six hours and 56 minutes, staying about a mile offshore with small swells on the port aft side of the boat.  It was comfortable enough that after exiting the Lake Worth Inlet and motorsailing for awhile, Sailor was convinced it was “safe” for him to go outside and sleep under the helm seat.

We have gone up and down the New River many times, every season except last year, since 2008. The river is not very wide and there are numerous megayachts,  sailboats, powerboats, fishing boats, tour boats, water taxis, pontoon boats, seadoos, kayaks, floating tiki bars, gondolas and small pleasure boats on the river. We have never had a problem, but this time on our way to our slip Mark moved over for a tour boat to pass us going the other direction and we went aground! The New River is dredged to the sea walls on either side, but unfortunately we found an area where the depth was less than five feet deep. Mark quickly backed out and we probably had no damage, but it was a shock after an uneventful trip here.

We are staying in a slip on the New River until Sunday, partly due to weather on the ocean for our sail to Miami, partly because we have a few boat repairs, partly so we could cook a Thanksgiving meal using various appliances, and mainly to rest and enjoy our last unlimited power and water at a dock until we return to Sunset Bay in May.

We are located right across the river from the Broward Performing Arts Center. Several years ago we were here in December and saw “The Nutcracker.” Right now, “The King and I” is showing and the next production is “Legally Blonde.” The buildings are beautifully lit up at night and will probably be adding more decorations for the Christmas holiday. To the left of the Performing Arts Center in the photo below is the Huizenga Pavillion. Wayne Huizenga Sr was a well known businessman, entrepreneur and the founder of Blockbuster Video, Waste Management , AutoNation and owner of a number of sports teams. The family is well known throughout Florida for their philanthropy. His daughter and son-in-law are owners of our home marina, Sunset Bay. The pavillion is used for events and dining before attending the theater productions. The photo was taken from our boat. 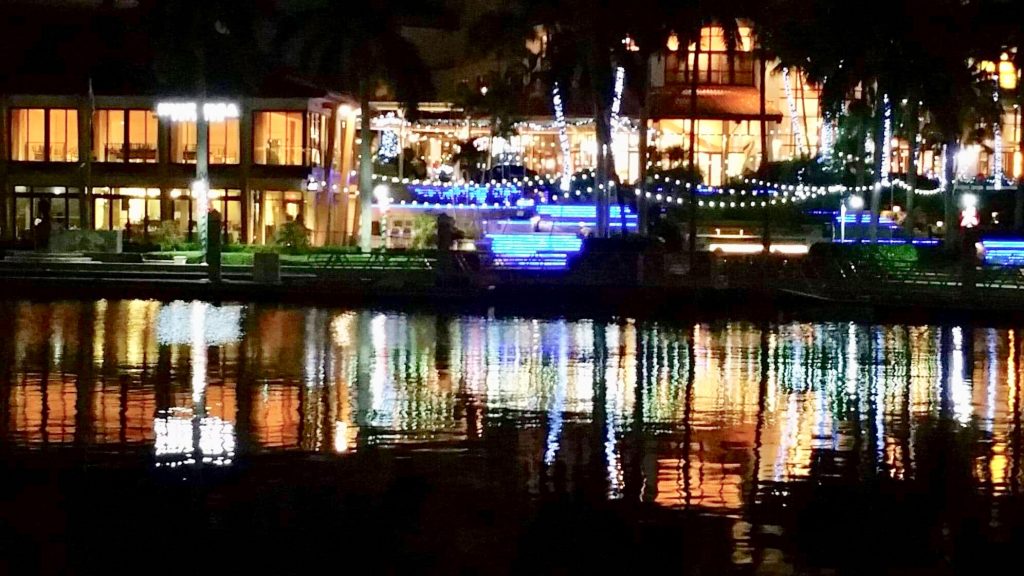 Before we left Stuart, we purchased all the “fixings” for a Thanksgiving meal. Mark cooked the 14 pound turkey in our Magma Grill. In addition he made all the side dishes: mashed potatoes, sweet potatoes, steamed asparagus w/hollandaise sauce, homemade cranberry/orange relish, stuffing and gravy. We have lots of leftovers in our refrigerator and freezer. 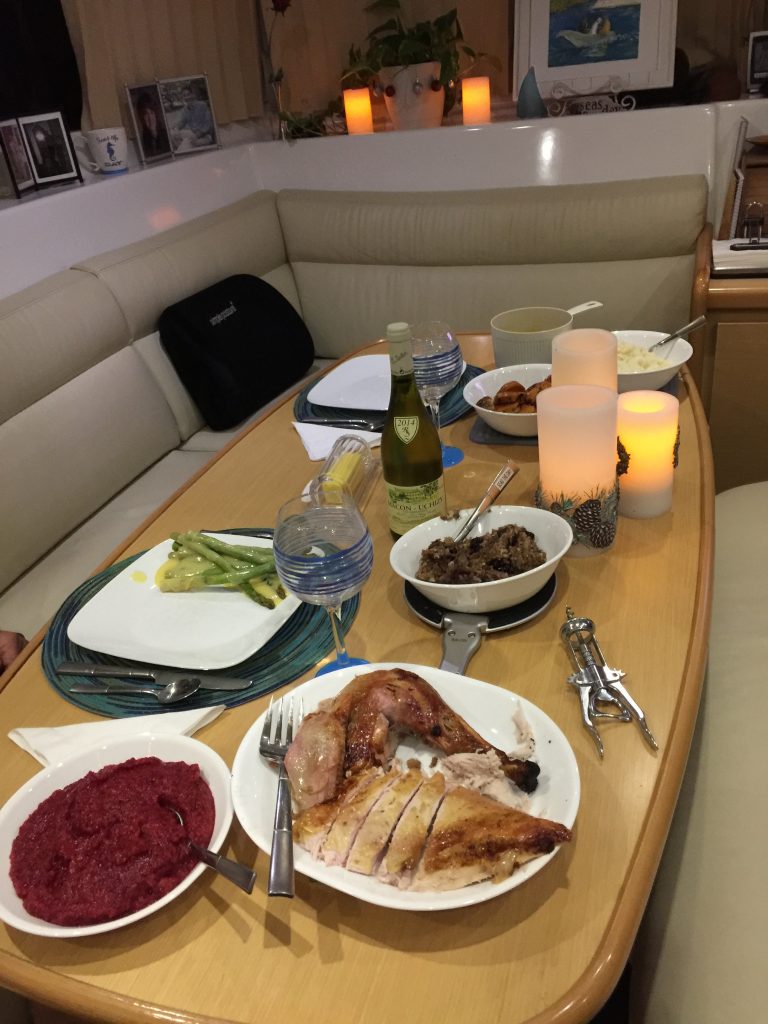 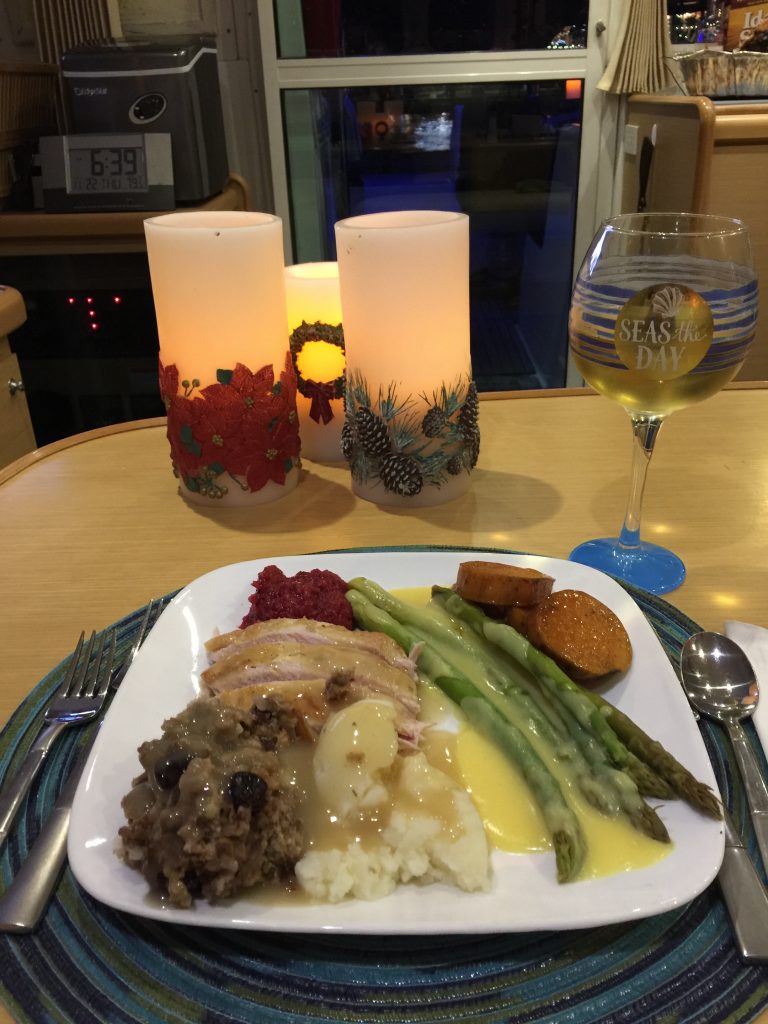 My job was to clean up after the meal. Naturally we don’t have a dishwasher, but even after meals this huge, I don’t miss it. However, it would be nice to have an empty cabinet to hide dirty dishes in until they can be washed. You can see the Broward Performing Arts Center lit up across the river through our galley window. 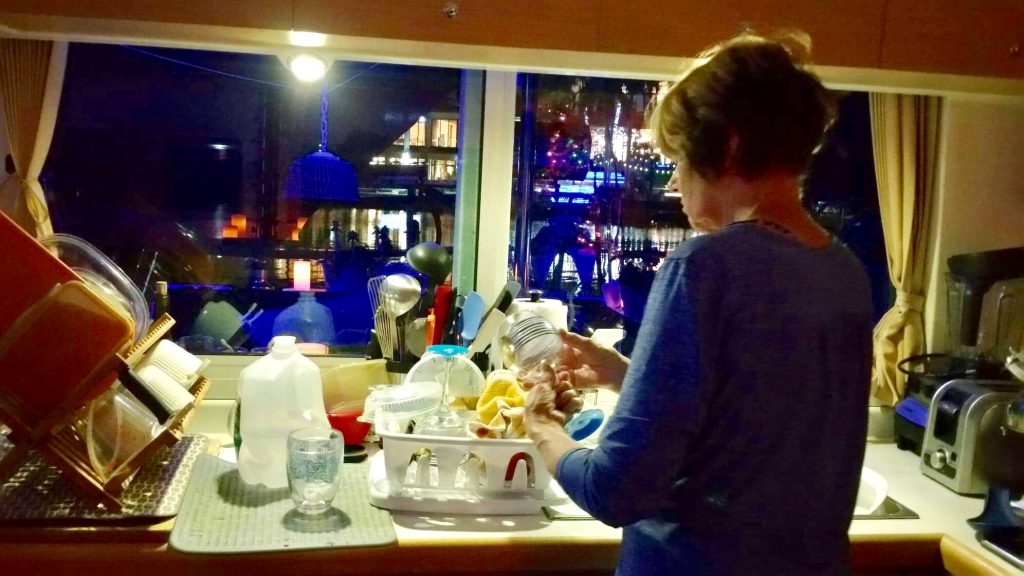 We are in a slip next to a small park and the paved Riverwalk runs past us. We are also in the widest part of the river at a turning basin, where boats have room to turn around. There is a lot of boat traffic, but the whole river in this area is a no wake zone so most boats go by very slowly and rarely make our boat rock.  Sadly, there doesn’t seem to be a noise ordinance and some small craft have speakers spewing loud music at all hours of day and night. The bridge tender near us must have gotten fed up last night because we heard him yell over his loudspeaker to a passing boat to turn the music down or he was calling the police. The music abruptly stopped. Below are a few photos of the area around us. There are lots of high rise condo and apartment buildings on this part of the river. Farther to the east, toward the ocean, the river edges are bordered with huge mansions. The little park area below is a few steps from our boat. It makes walking Sailor very easy, although I suspect he prefers riding in a dinghy to the beaches. 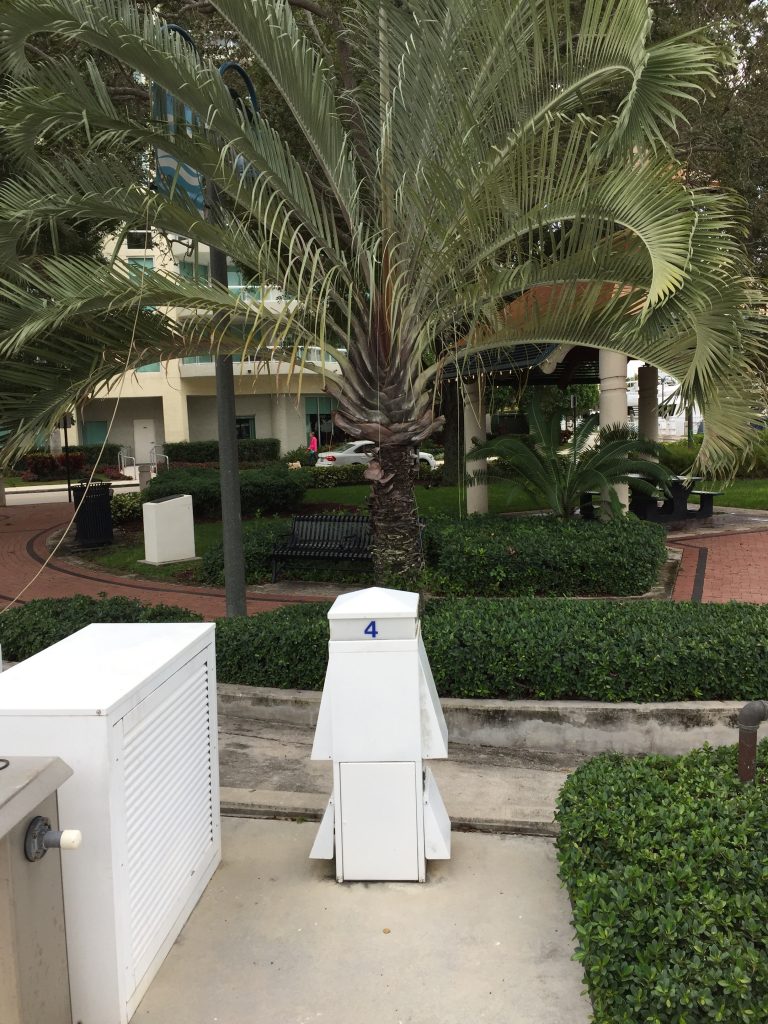 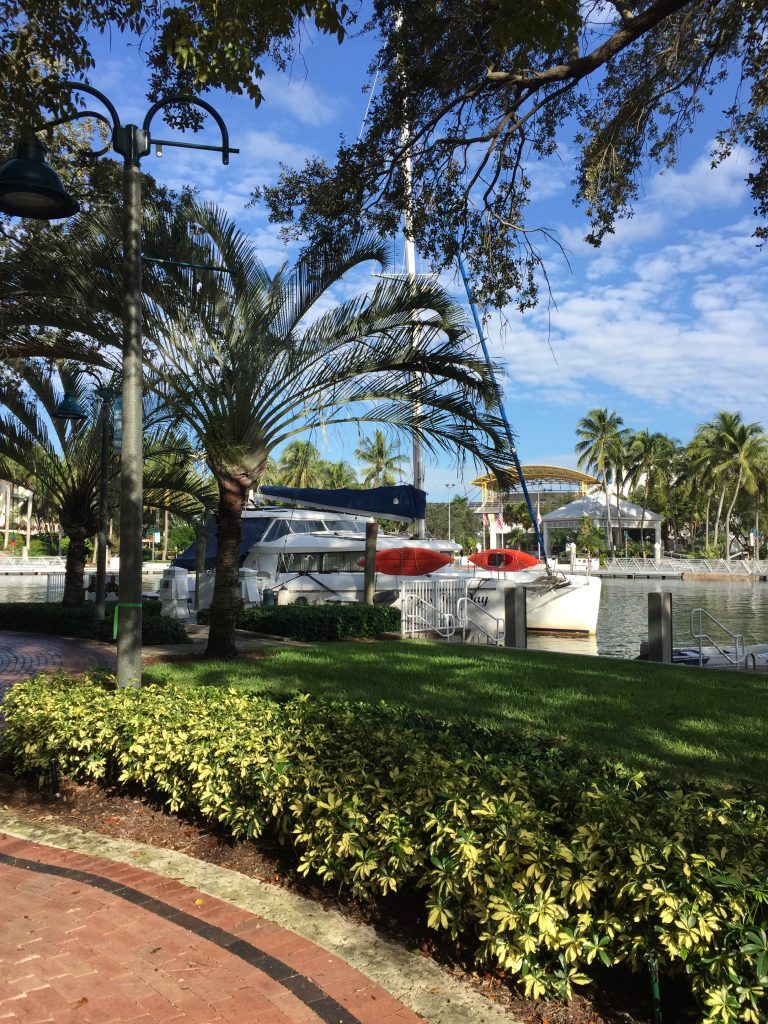 Thanksgiving Day was rather quiet on the river, but the day after everyone who has a small boat must have been out, along with a few large yachts that have been farther up the river at the Lauderdale Marine Center having work done. The megayachts are so huge they are required to have tow boats guiding them.  We even saw a tiki bar pass by in the late morning, a little early for drinks, but I’m sure they tell their customers, “It’s 5:00 somewhere.” In this  picture you can clearly see the brown railroad bridge down and one of the the pink bascule bridges further on that opens on request.

Early Friday morning we woke up to the sound of bow thrusters. Many powerboats, all yachts and some large sailboats have these devices so they can maneuver sideways into slips or away from a hazard. Yesterday morning our boat was the hazard. A yacht was held up for almost a half hour waiting for the nearby railroad bridge to go up. Every 5 to 10 seconds, the captain used the bow thrusters to keep away from our boat as the current was strong. The bow thrusters can be heard through the water and I woke up to them at 6:55 am. I came into the salon, looked out the window and saw this.

Just after I took this photo through the salon window, in my nightgown, three men on the yacht’s bridge waved at me. Hopefully they thought that was a dress I was wearing. We don’t worry about any of the large yachts hitting us, since they have very experienced crew. The entire half hour they were next to us, two crew members were standing on her starboard side watching that she didn’t get too close to us. Several more crew members were on the bridge and the captain was using the thrusters as needed.

We always watch out for The Jungle Queen, a large tour boat that goes up and down the river constantly. Since we are in the turning basin, it is wide enough for boats to pass her here. Sometimes she comes so close to us we are tempted to say, “Pardon me, would you have any grey poupon?” (Google “Grey Poupon Commercial” to watch on YouTube if you are too young to remember this.) The photo shows a trawler easily able to pass the Jungle Queen. At some parts of the New River, this would be difficult. We always wait to hear where the Jungle Queen is located before we start up the New River. Seas the Day is 25 ft wide so coming around one of the many bends on the river to see the Queen might be hazardous. 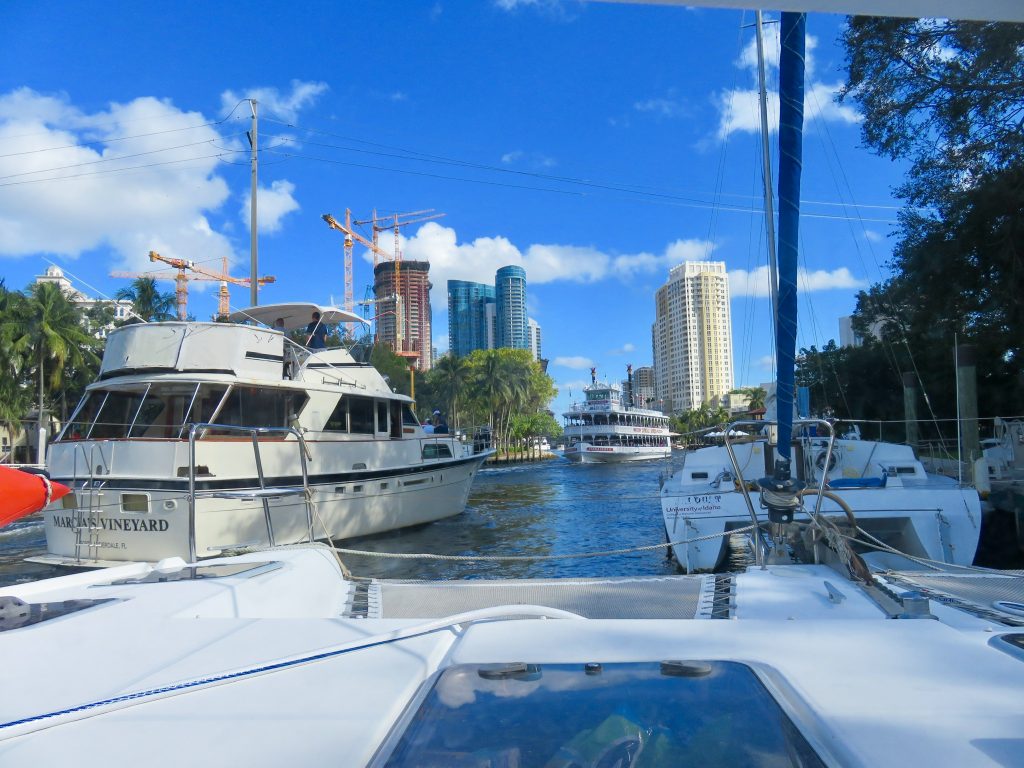 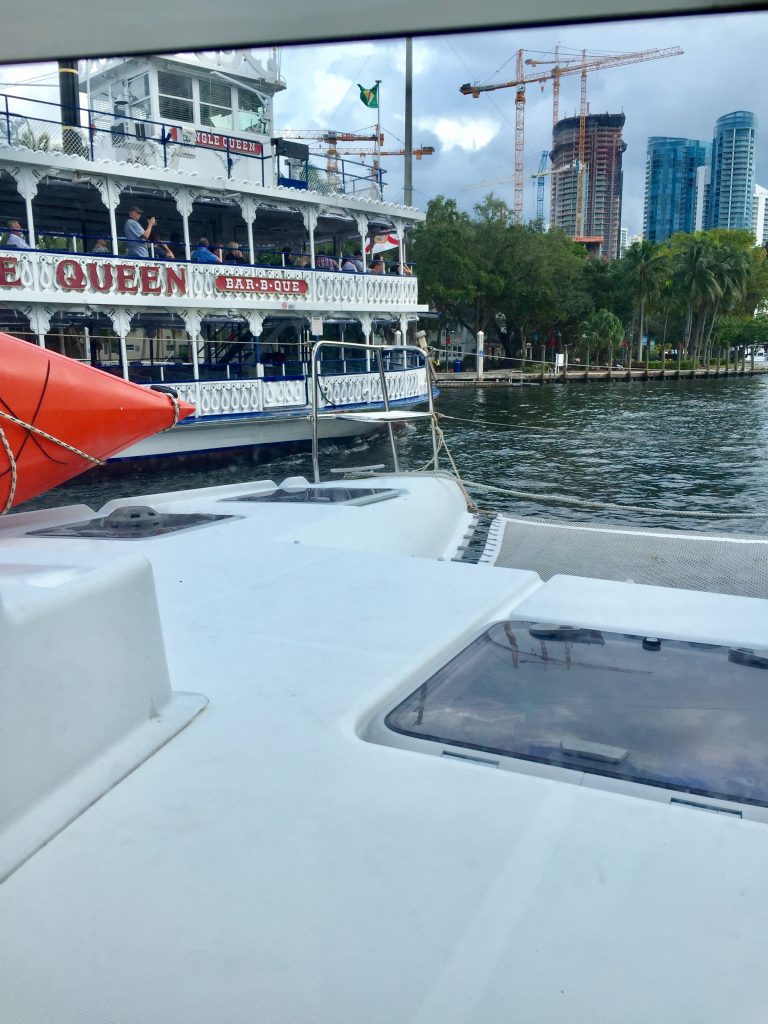 Of course, Sailor was delighted to arrive on the New River. He seemed to remember everything from previous visits. Below are a few pictures of Sailor investigating the area.

Sailor was very patiently waiting for Mark to finish a boat chore so they could go for their walk. 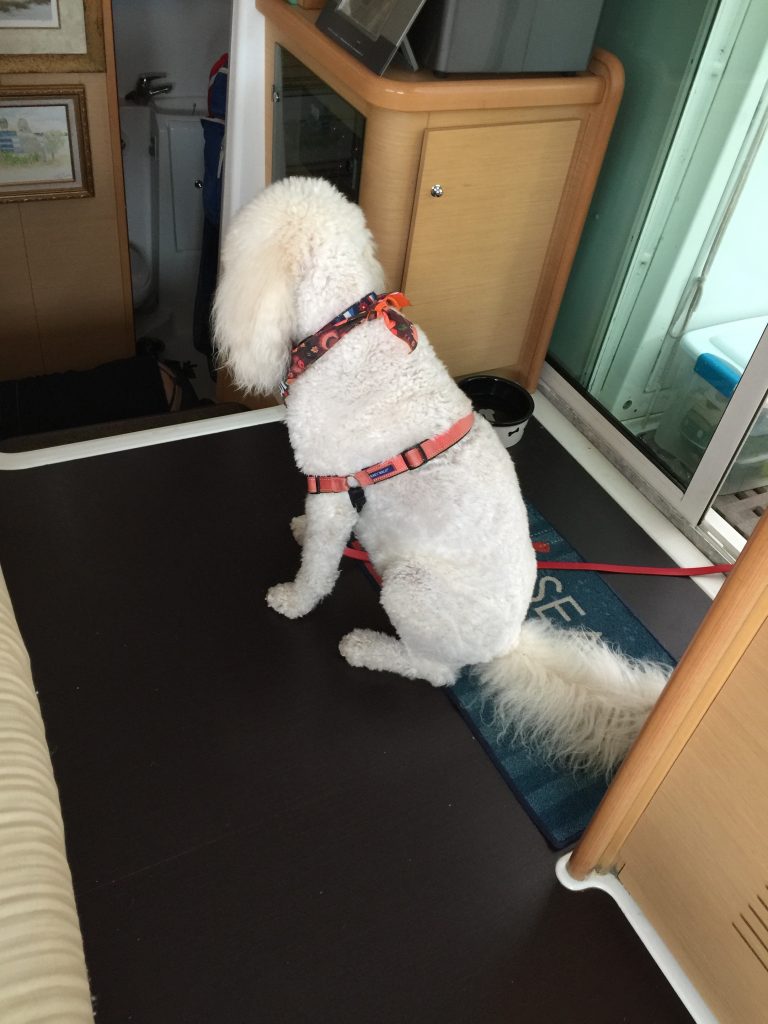 Once they were on their walk, they crossed the bridge and walked on the other side of the river where they found many interesting sights. Below is a sculpture of a sailboat riding a wave with pictures of various local scenes covering the boat. 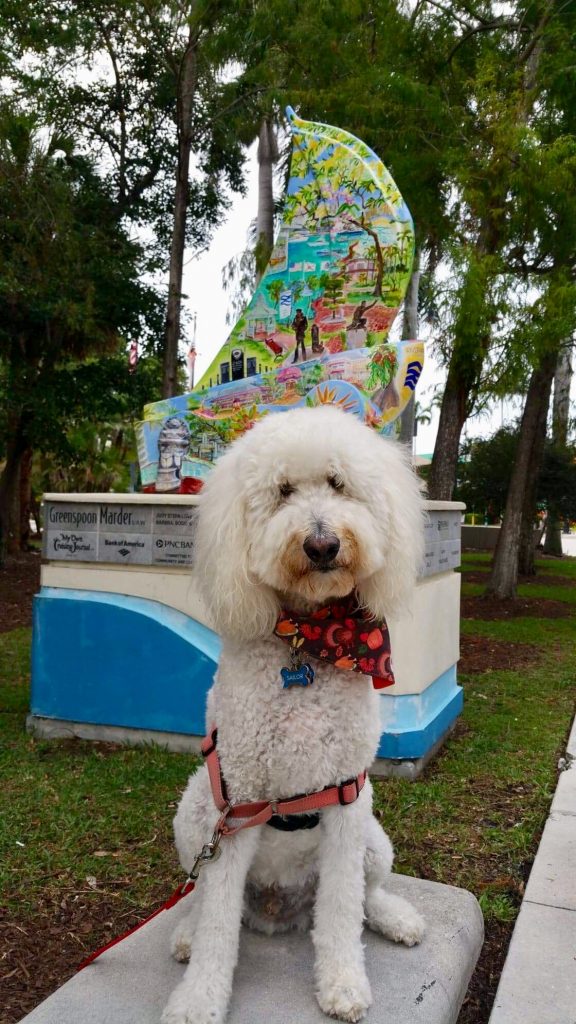 Of course, Sailor insisted on getting his picture taken on a huge chair that he had seen small children climbing on for their photo.

Since Seas the Day was across the river, some of the photos included Sailor’s home. 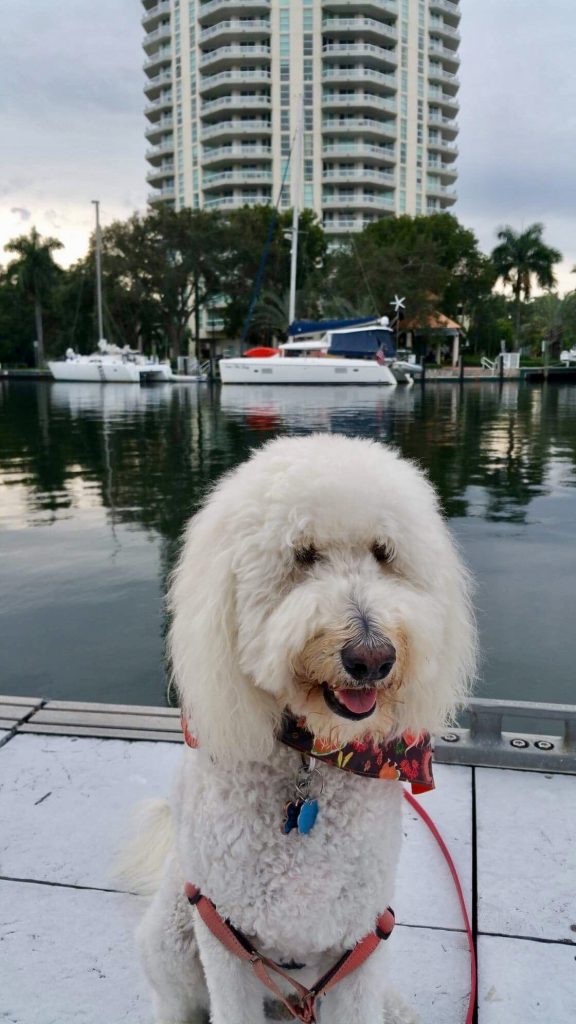 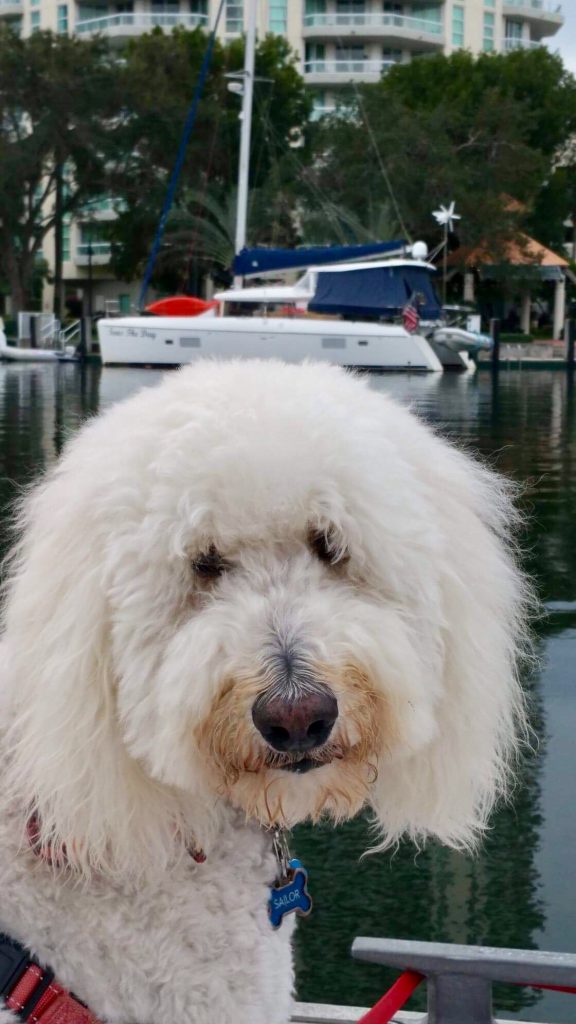 This area of Ft. Lauderdale is very colorful.

Walking a few blocks to Publix for a few items yesterday, we had to stop and wait for a train at a crossing. The recently added Brightline passenger trains are what is causing havoc in Ft. Lauderdale, not just the numerous prolonged closings over the river, but also stopping street traffic all over the city. 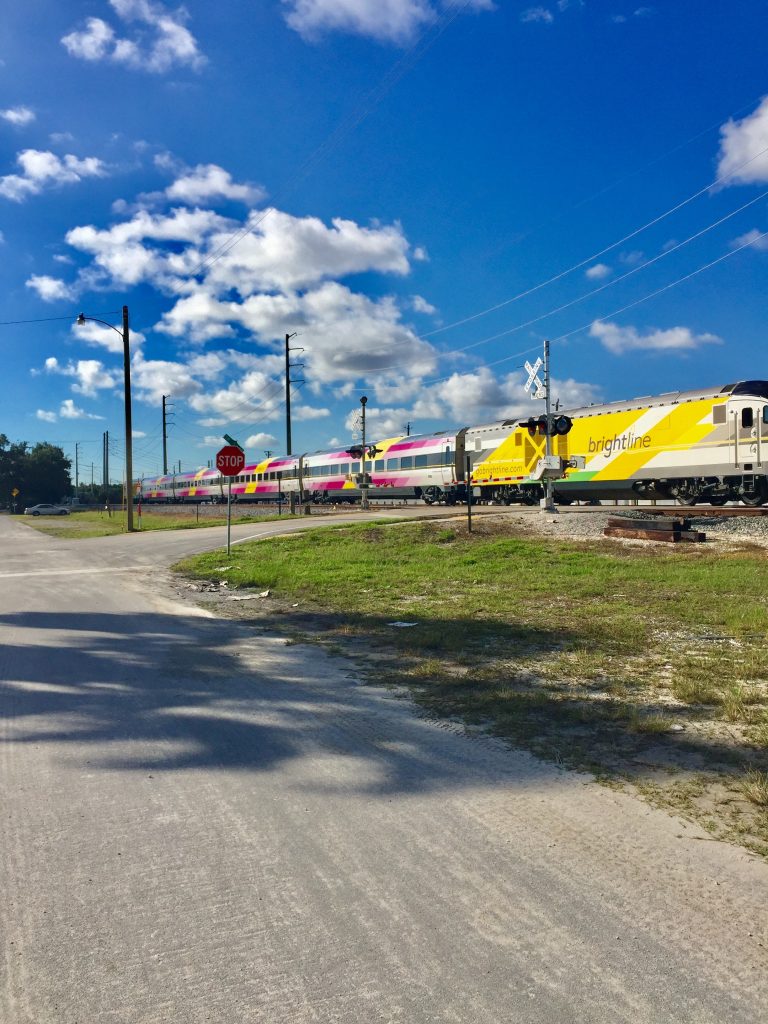 After a long walk, Sailor always insists on resting on a bench. Back home in Stuart, the chosen bench is either in downtown Stuart or in front of Sailor’s Return Restaurant located next to Sunset Bay Marina. Sailor has many friends in the area of Stuart near our marina, so he is always greeted and pet by many people. I think he misses the adulation he experiences in Stuart since he was mostly ignored by the people here. Sadly, every year we stop in Ft. Lauderdale there seems to be more homeless people. They are either sleeping on benches or walking around with large garbage bags holding all of their belongings heaved over their shoulders. 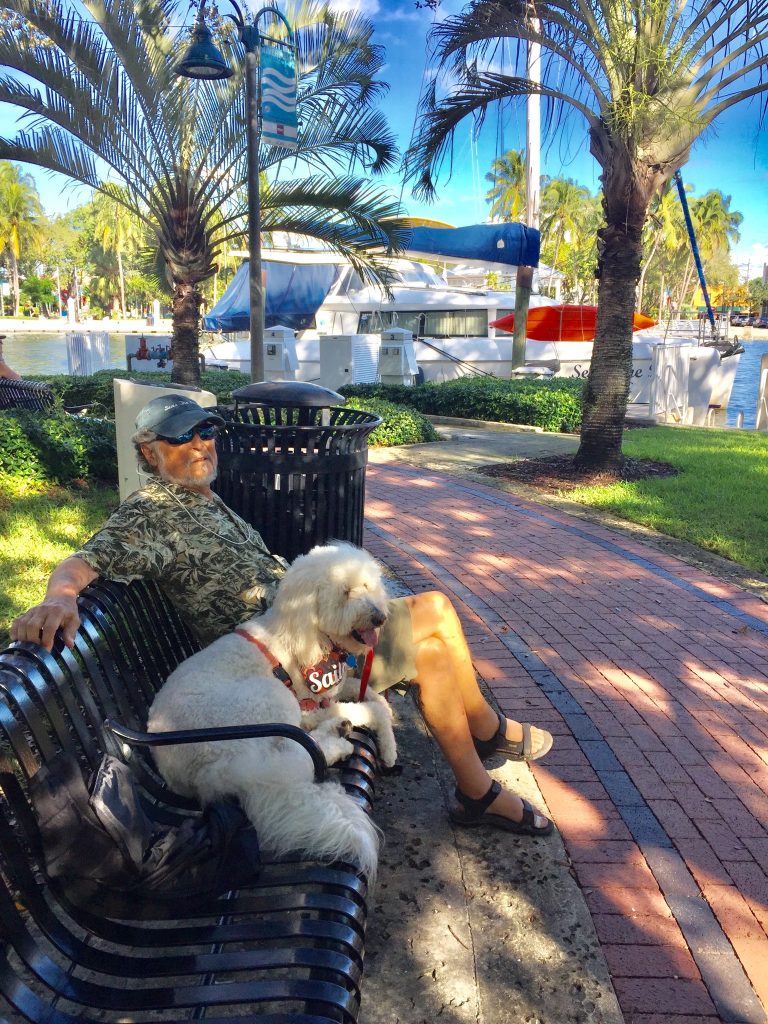 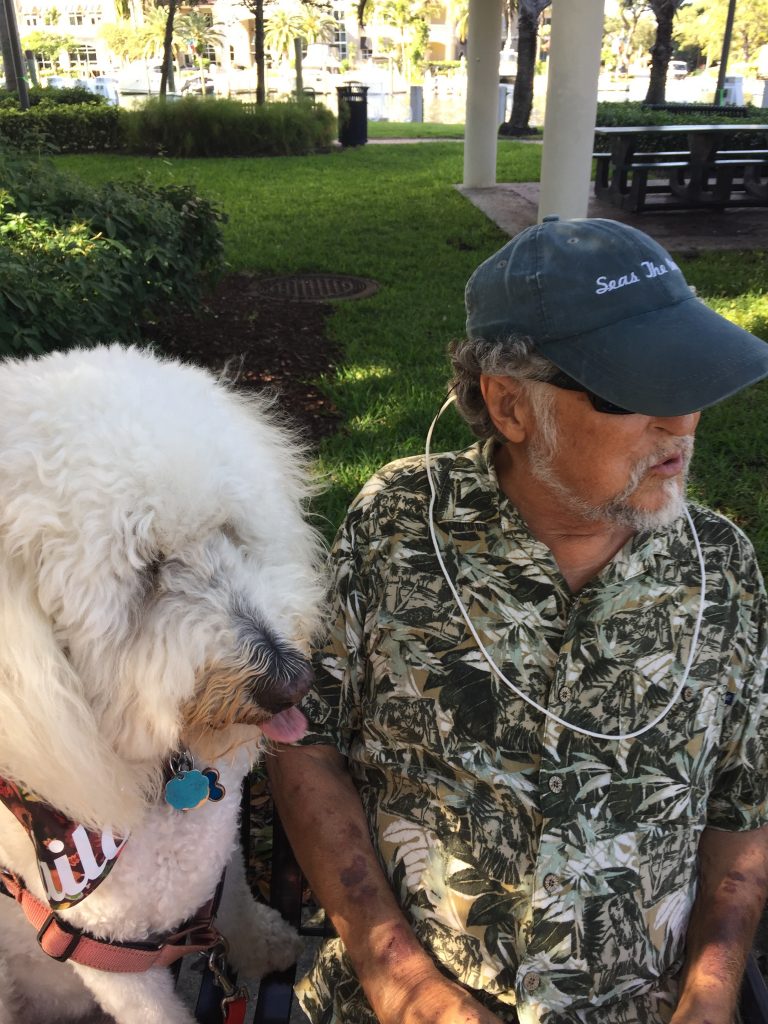 The string around Mark’s neck is there to hold onto his hat in case the wind blows it away while we are sailing. I wonder what people who see him think it is. It looks kind of like one of those necklaces that light up in the dark. The string does seem to work since he hasn’t lost his hat yet, so perhaps he should get a patent for it.  Incidentally, the numerous bruises on Mark’s arms are due to blood thinning drugs, but seem to have gotten worse due to the hormone treatment he has been taking for his prostate cancer.

We are staying in Ft. Lauderdale until Sunday and then will sail to Miami. We missed the latest weather window to sail from Miami to Bimini on Saturday and Sunday. The next chance as of now is at the beginning of December. We’ll spend the waiting time on a mooring ball at Dinner Key in Coconut Grove, part of the Miami area.

Our tracking device, a Garmin inReach Explorer, will enter a new track every ten minutes while we are moving. The link to see it is  https://us0-share.inreach.garmin.com/seastheday

Finally, one nice thing about being on shore power is that we were able to decorate our boat for Christmas and actually turn the tree lights on! We purchased our three foot Christmas tree with attached lights ten years ago for our first Christmas on the boat. The pothos plant in the decorated pot is very special to us. Pothos grow wild in fields in Spanish Wells. Several years ago we took a small cutting to remind us of one of our favorite stops in the Bahamas, our last one each trip. 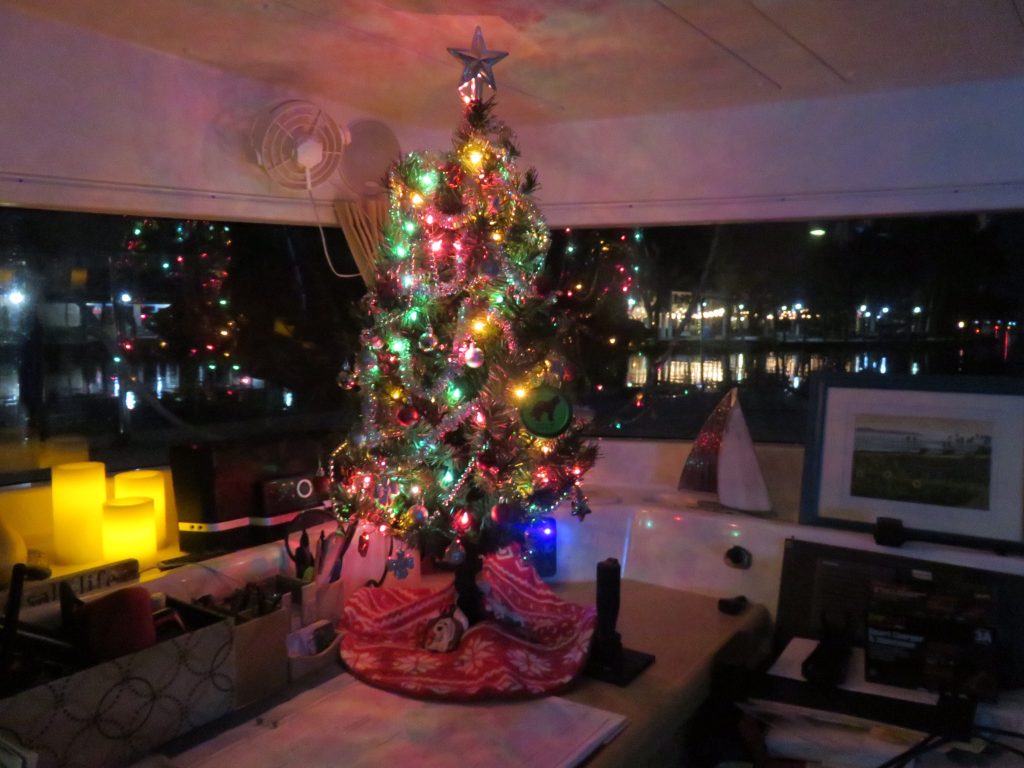 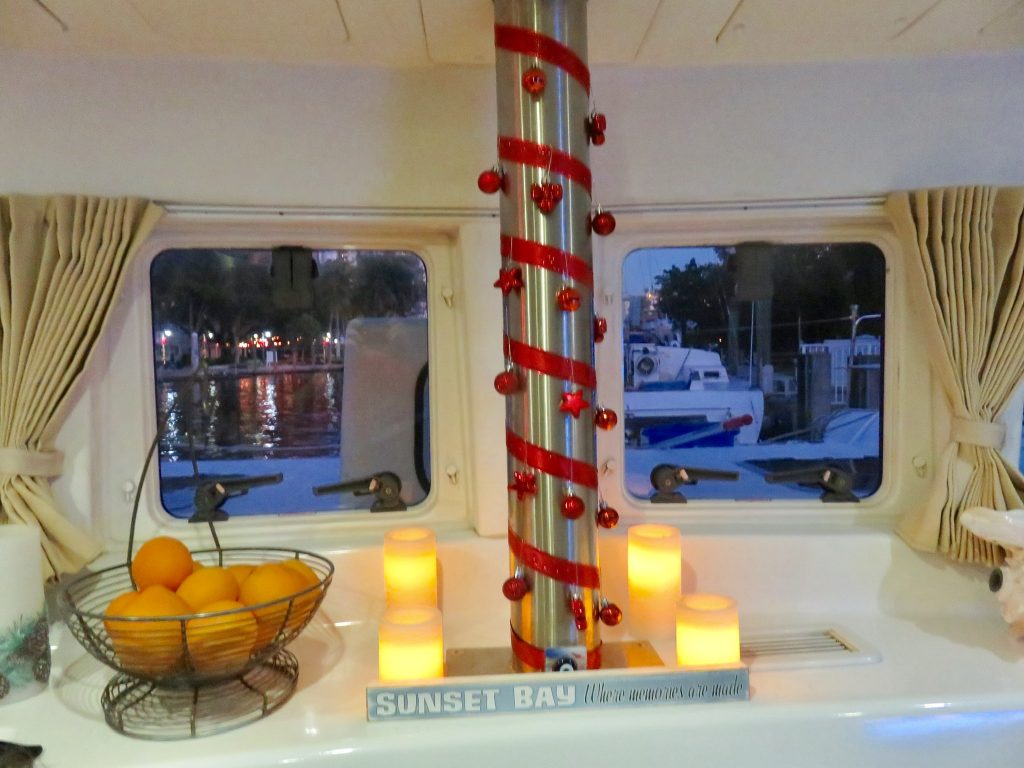