On November 18, 2016, we left Great Harbour Cay Marina at 1500 and motored to nearby Bullock’s Harbour, about 1.5 miles north of the cut into Great Harbour Cay. Even people who have been in and out of the marina many times do not do it in the dark in a large boat. There are several tight cuts and turns to navigate through.  Since it was our first visit to this marina, we were definitely not leaving in the dark from the marina slip the following morning and that was necessary in order to get to Nassau in the light. 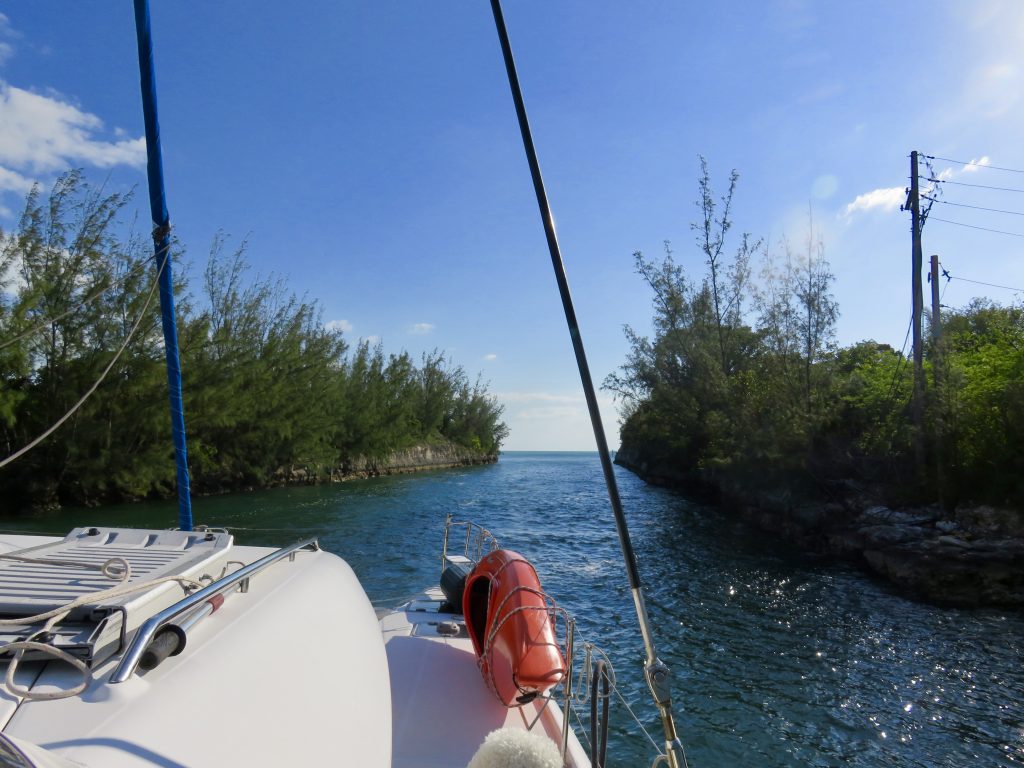 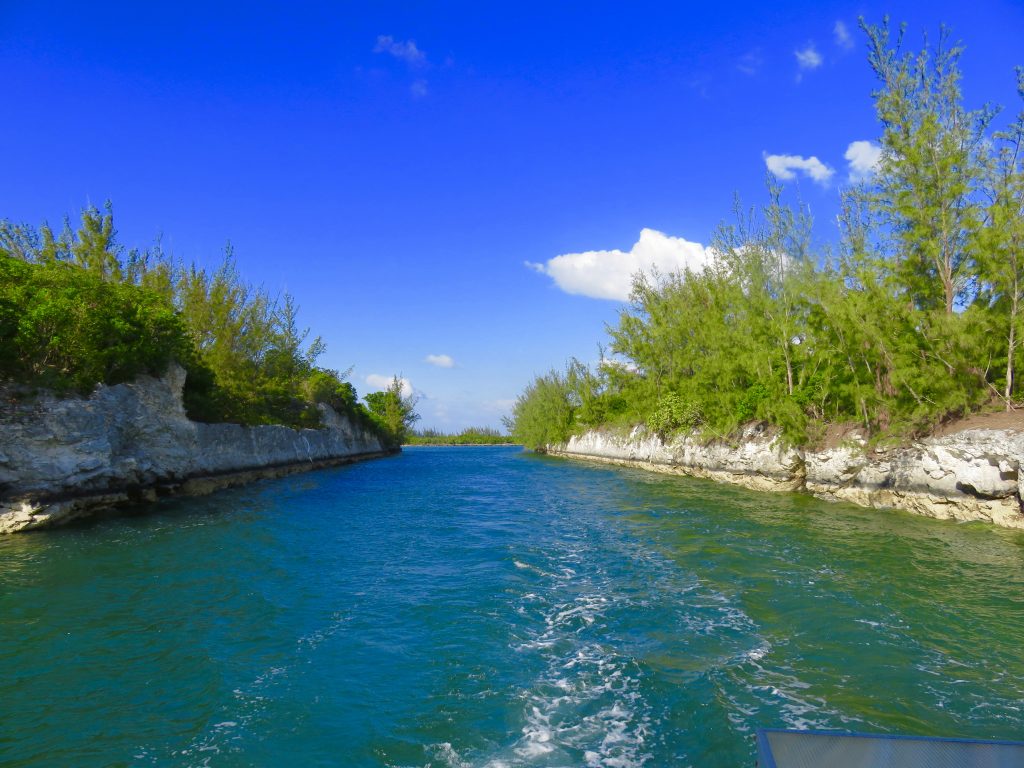 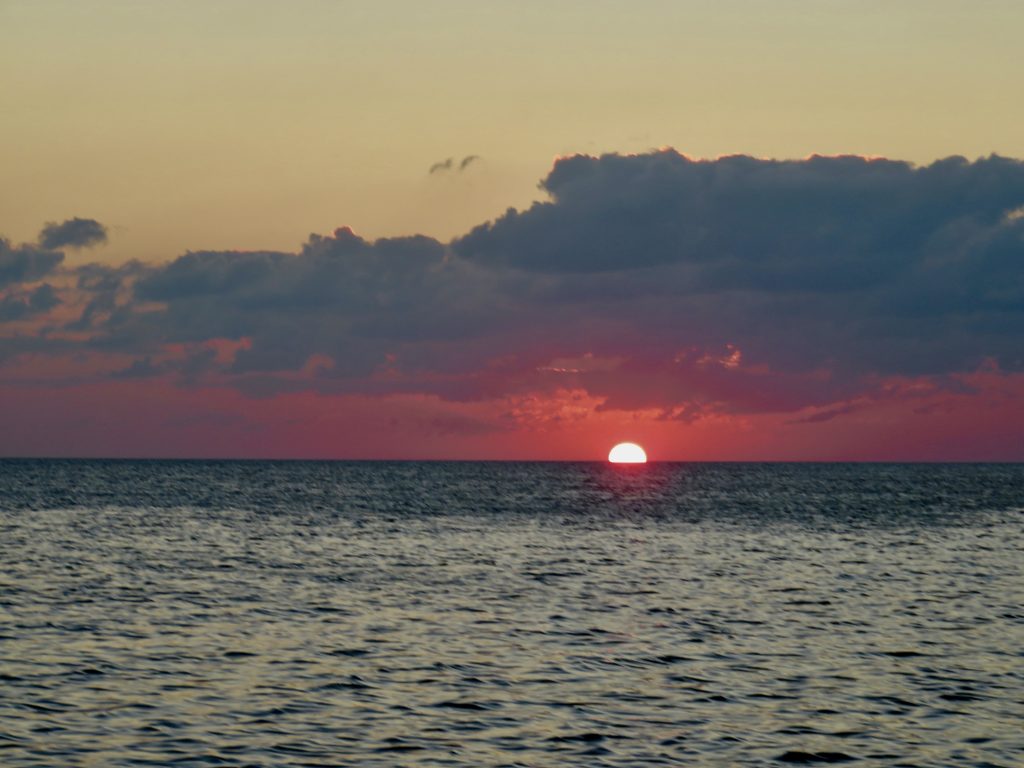 Since we saw “Red sky at night, sailor’s delight,” we left the next morning for Nassau. Actually, we checked the weather forecast first and had a fairly pleasant motorsail, averaging 8 kts. Part of the route was over deep water, called The Tongue of the Ocean, and we did have large swells, but they were on the port aft beam, about 12 seconds apart, so they were manageable. We left Bullocks Harbour at 0520, in the dark, and arrived in Nassau at 1435, pulling into a slip at Nassau Harbour Club with several hours of daylight left. Very few boats were there, since the majority of cruisers hadn’t crossed to the Bahamas yet. We walked across the street to the strip mall, stopping at Starbucks and also picking up some fresh fruits and vegetables at the Fresh Market. It’s not the chain from the States, but is an equally nice grocery store and the last well stocked store we would see until the Exuma Market in Georgetown. In the Bahamas, we rarely look at prices, and buy what we need since there really isn’t an option. Except for a few dairy products, almost everything is much more expensive than in the States and of course we don’t always find the brands we prefer. Since we have stocked dry goods for seven months, we usually only have to buy fresh vegetables and fruit and eventually cheese, eggs, yoghurt and other dairy products. I freeze several months worth of yoghurt and eat it frozen for breakfast every day, so I don’t have to buy any for quite awhile.

The next morning we left the marina at 0755 and motorsailed across the shallow bank, arriving  in Shroud Cay, part of the Exuma Land and Sea Park, at 1340. Until we exited the Park after Cambridge Cay, we would have no Internet or phone service since there are no cell phone towers in the Park. For most of the rest of the way to Georgetown we would be on the “bank” which is shallow water. Therefore unless the winds were extremely high or from the west, which isn’t protected since we travel on the bank with islands to the east of us, or if there were squalls, we could move from cay to cay without encountering uncomfortably rough conditions. We chose this stop over the more protected Norman’s Cay, a few miles to the north, because we wanted to take the kayaks into the mangroves. Unfortunately there were swells on the beam in the Shroud Cay anchorage/mooring field so it was an uncomfortable stay and Norman’s Cay would have been a better choice for our first stop in the Exuma chain.  We didn’t paddle in the mangroves long because the tide was going out and it gets shallow even for a kayak, so we could end up walking back and dragging our kayaks behind us. However, this is a favorite place to snorkel in the midst of nature and silence so it was worth the rocking and rolling night. 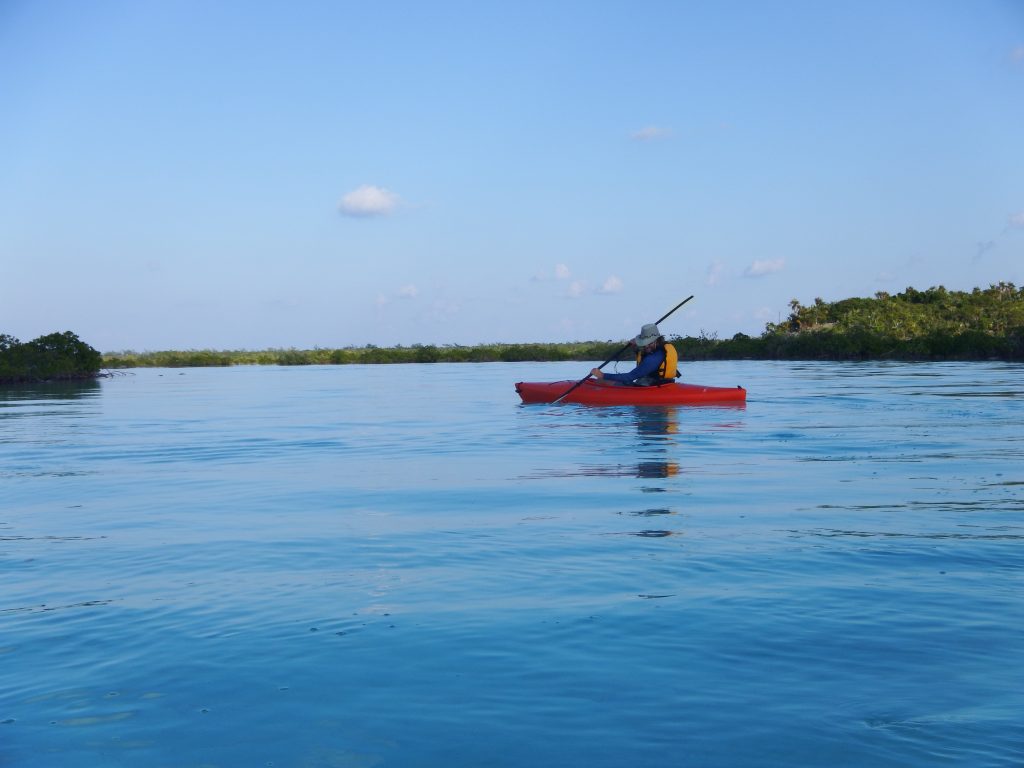 The next morning at 0725, we sailed south to the headquarters of the Land and Sea Park, Warderick Wells, and took a ball for two nights. When we arrived at 1000, we were the only boat on the balls in the North Mooring Field, except for a lonely sailboat that belongs to the park. Over the two days we were there, a few more boats came in but it was not full the way it is later in the season. Of course we had to go up to Boo Boo Hill where cruisers leave handmade driftwood boards with their boat names on them and there is a beautiful view of the Exuma Sound and surrounding Park foliage and water. Even though Hurricane Matthew passed over the Exumas a month earlier, there were still plenty of signs on the hill, including our Seas the Day one that we first put on Boo Boo Hill in 2010 and have added to in subsequent visits in 2013, 2014, 2015 and 2016. Mark originally carved into the driftwood and painted the letters, but the past few years had just used Magic Marker and it had washed off. He brought the sign back to the boat and painted the dates. We’ll probably stop at Warderick Wells again this season, so will add “2017” on that occasion. (Usually we stop here on our way south in January or February, so we had already been here in 2016.) We also went snorkeling in the north mooring field and around Emerald Rock. Peter used his GoPro camera to shoot a video and got some nice shots, although the coral is not as bright as it was when we first came here in 2010. After two days we were ready to move on.

Seas the Day, alone in the mooring field 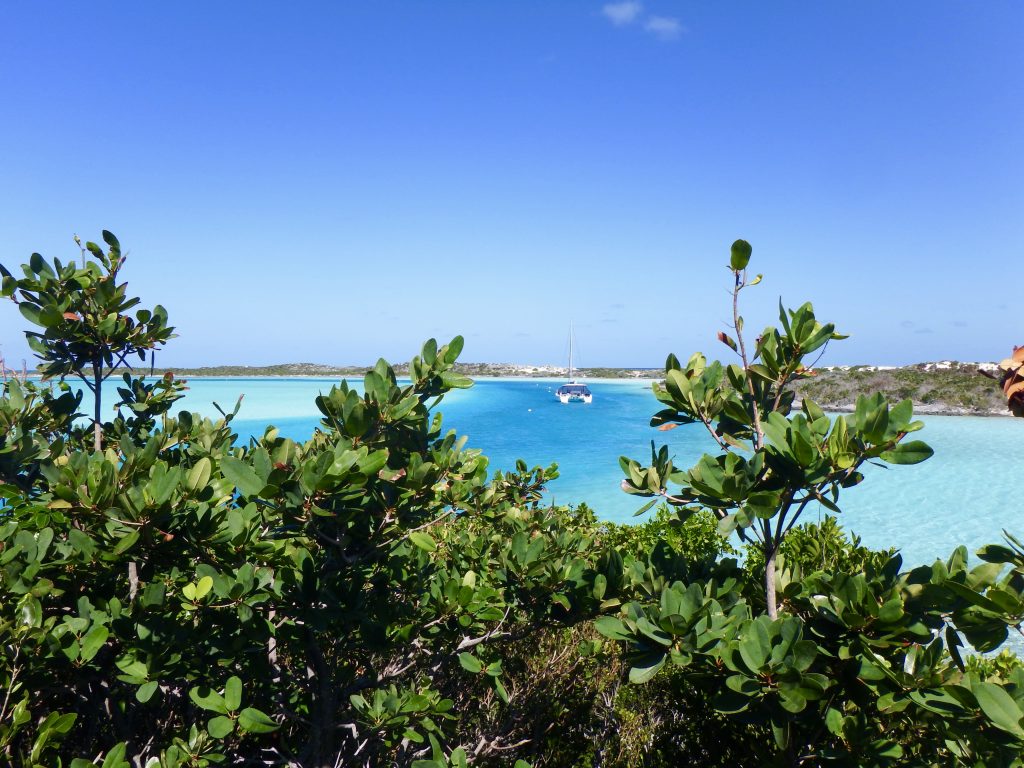 Peter stopped to look at the skeleton of a 53 ft sperm whale, who died after swallowing a plastic bag. 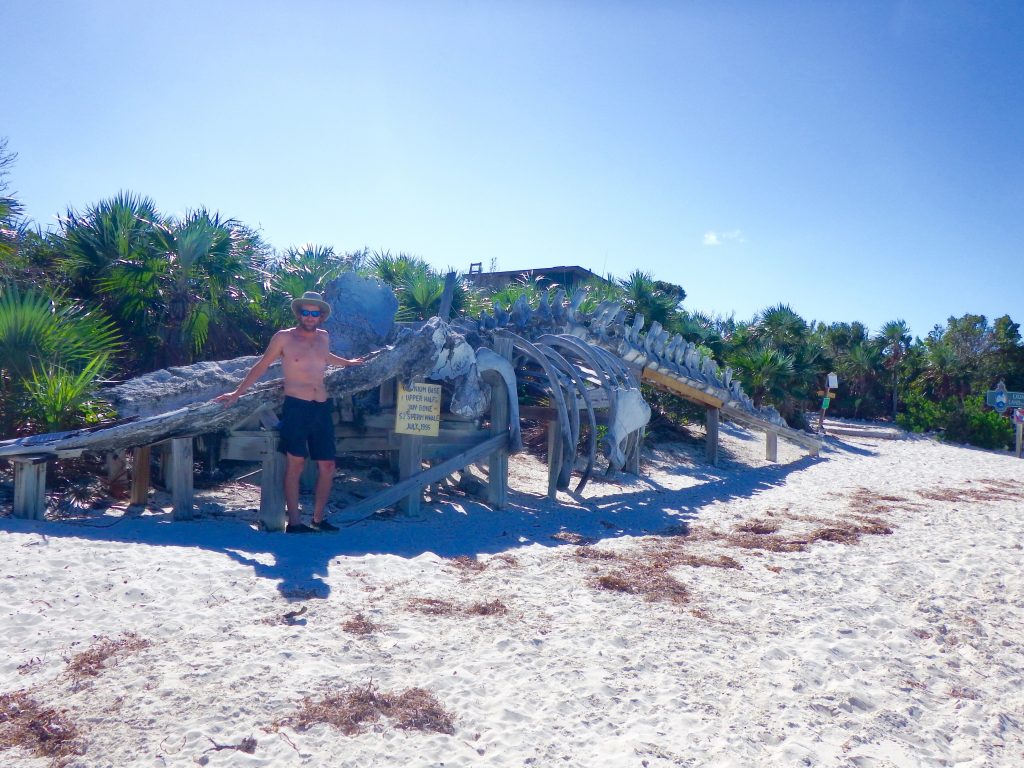 Dogs must be kept on a leash in the park and only on the beaches, not the numerous trails. We take Sailor to a beach by Emerald Rock  so he can swim and fetch his ball. 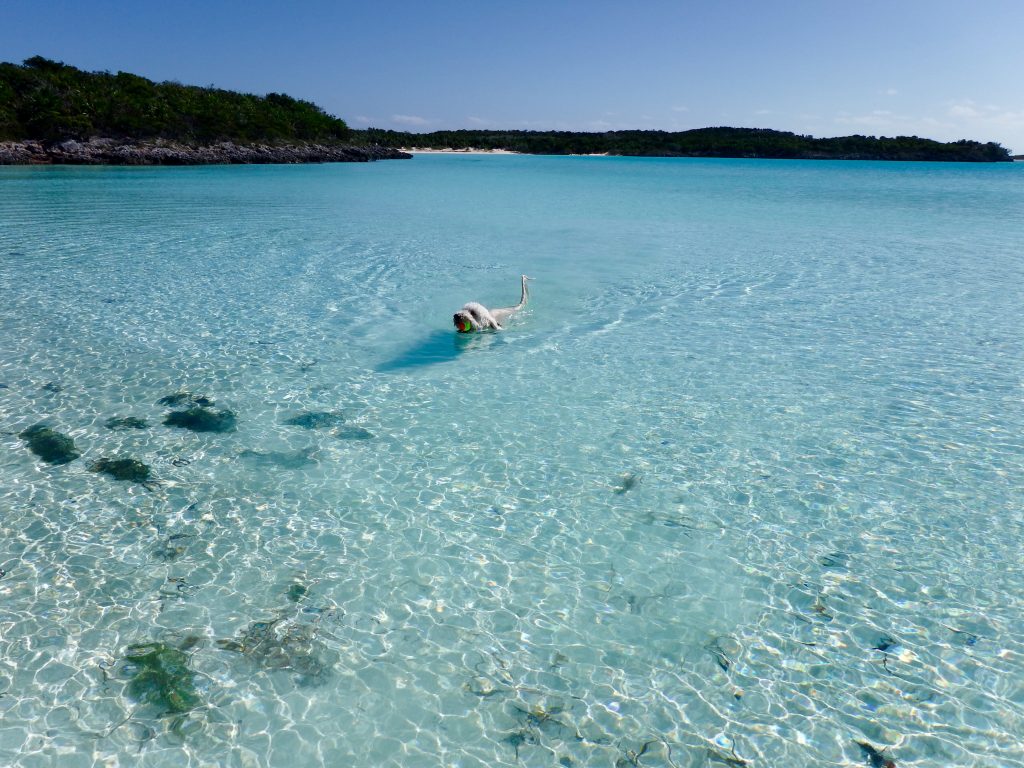 The Park Headquarters are in the building on the hill, with access by dinghy from a dock or a beach near the sperm whale skeleton. 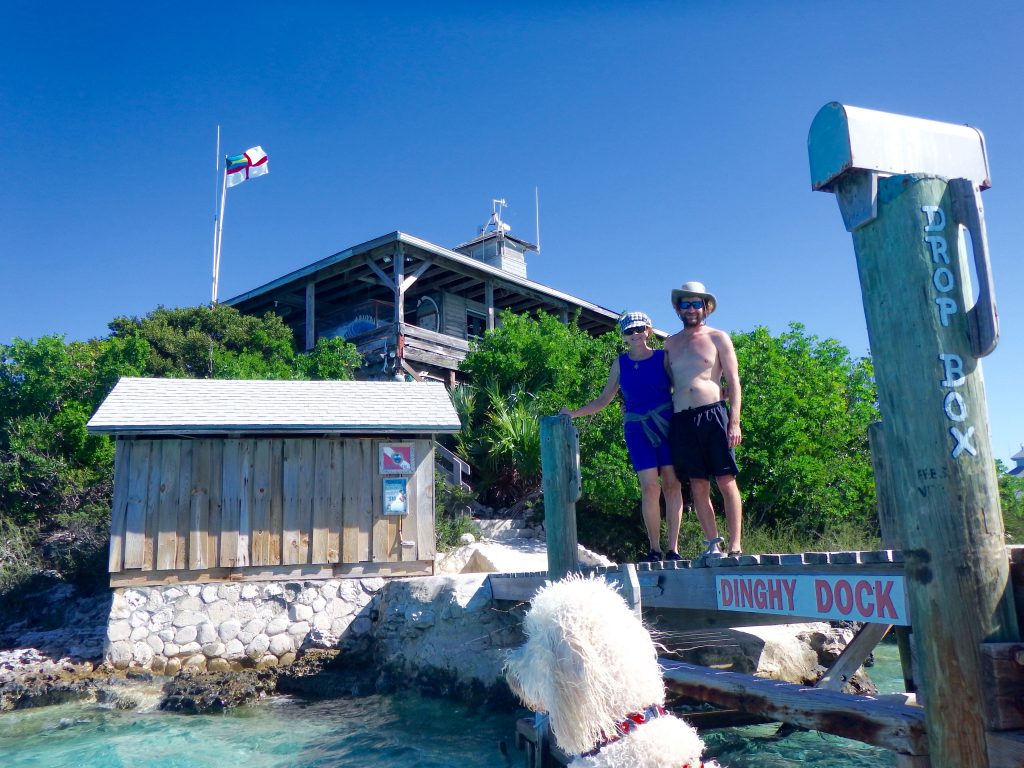 Peter walked up the path to Boo Boo Hill. 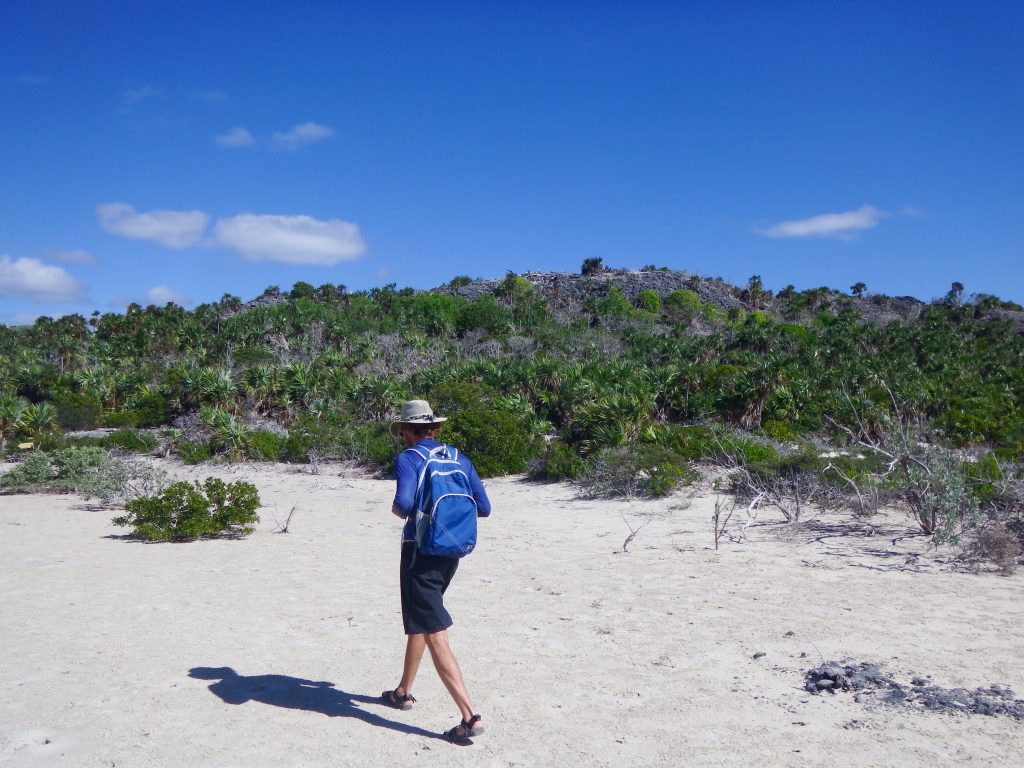 Views below are from the top of Boo Boo Hill. 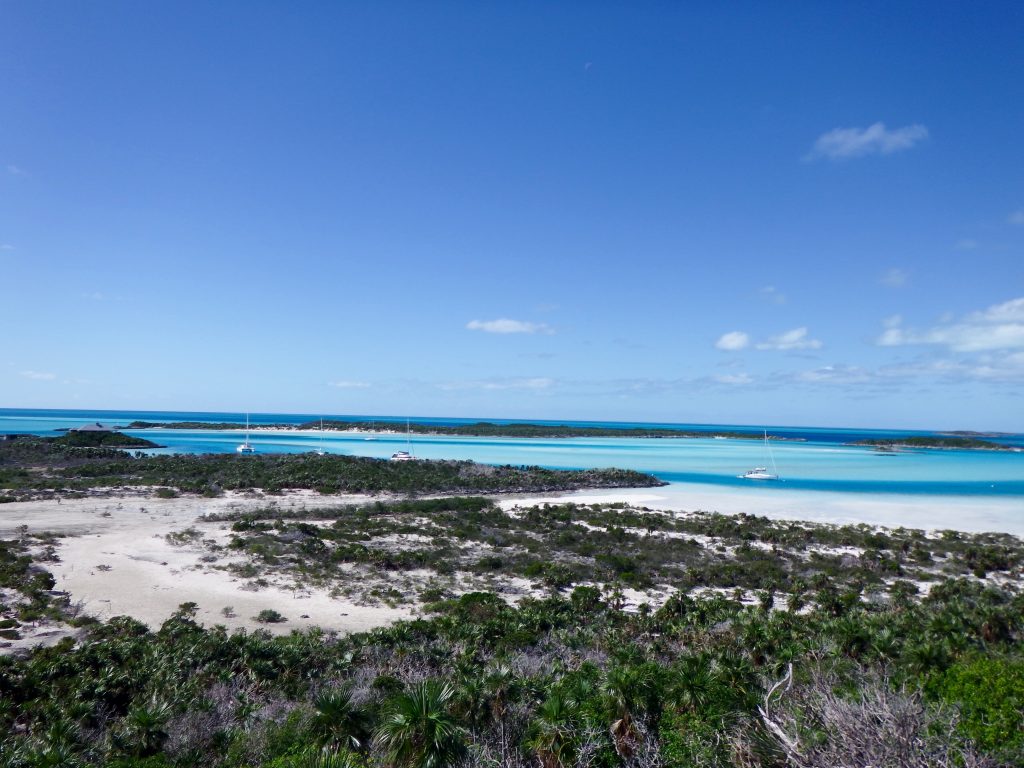 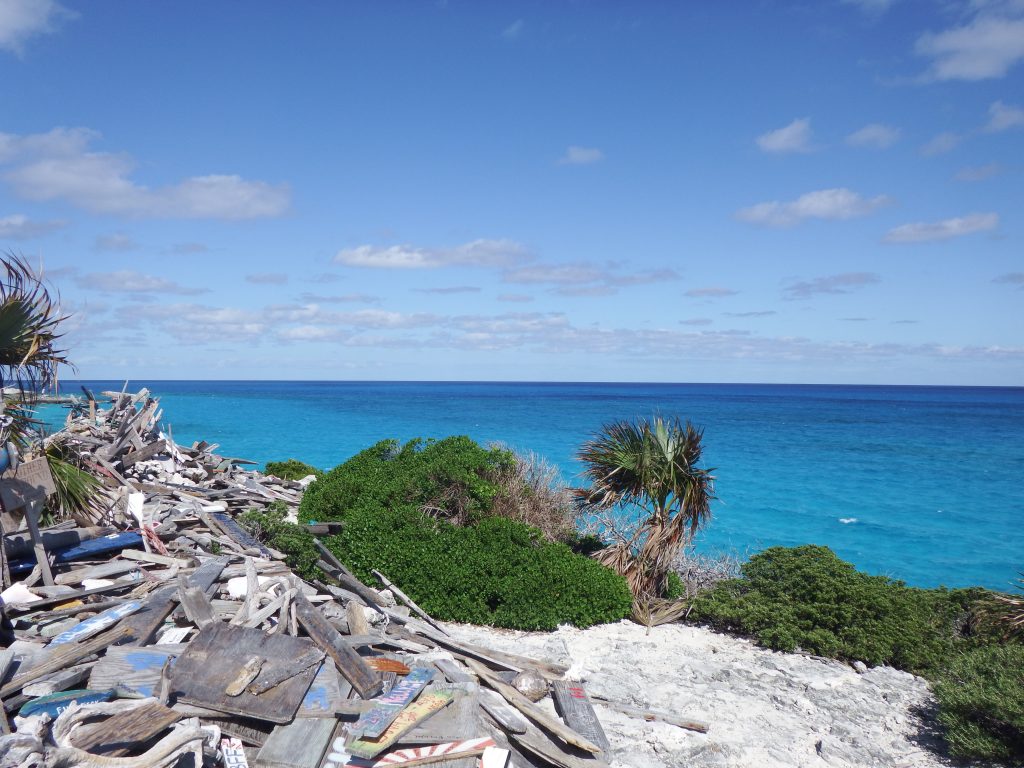 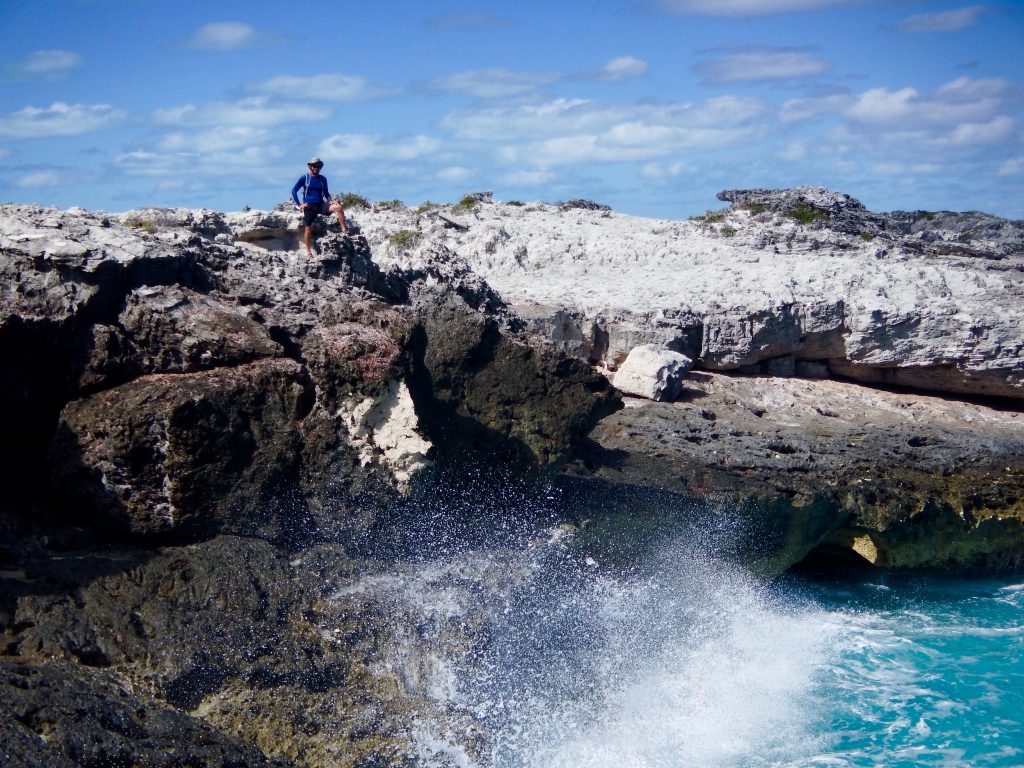 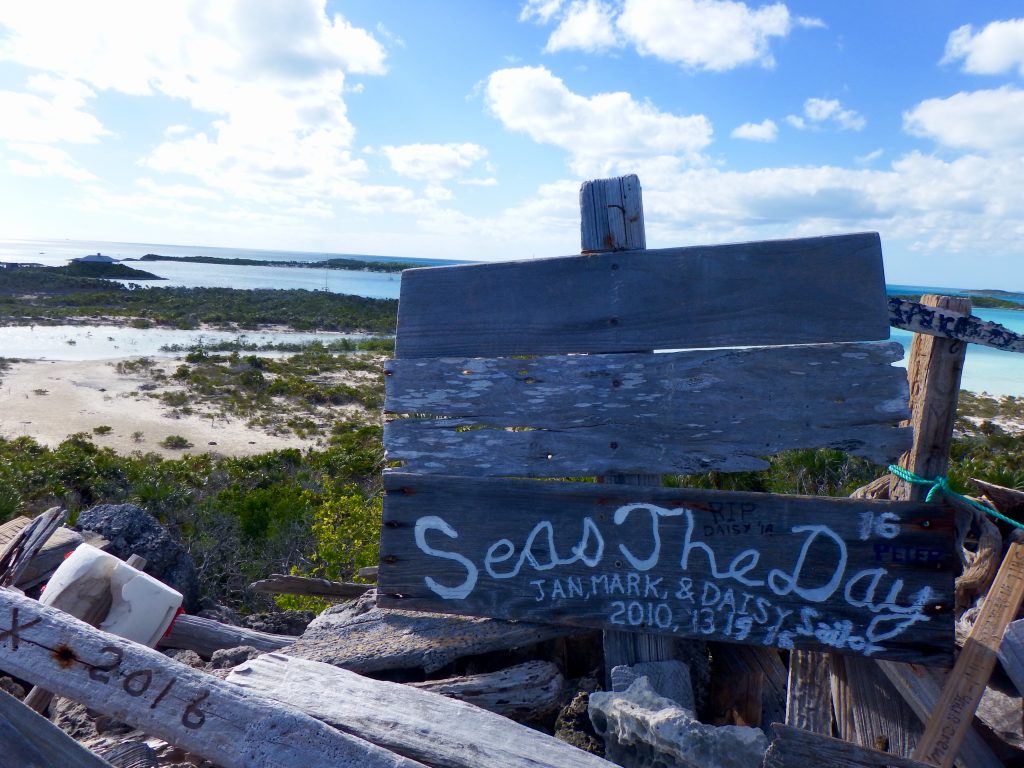 Video of snorkeling in Warderick Wells in the north mooring field and near Emerald Rock, by Pete Beagle:

We had one more stop in the Land and Sea Park, Cambridge Cay. We left Warderick Wells at 0915 and tied up to a ball in Cambridge Cay at 1130 on 11/23/16. Again, we were the only boat in the mooring field. We only stayed one night, but it was an exciting, and a bit frightening, afternoon. Since it was still very windy, we took the dinghy to The Aquarium, a sheltered area with a coral wall and lots of tropical fish. We all went in the water and then started back to the boat. One of us had to stay in the boat with Sailor or he would have joined us. 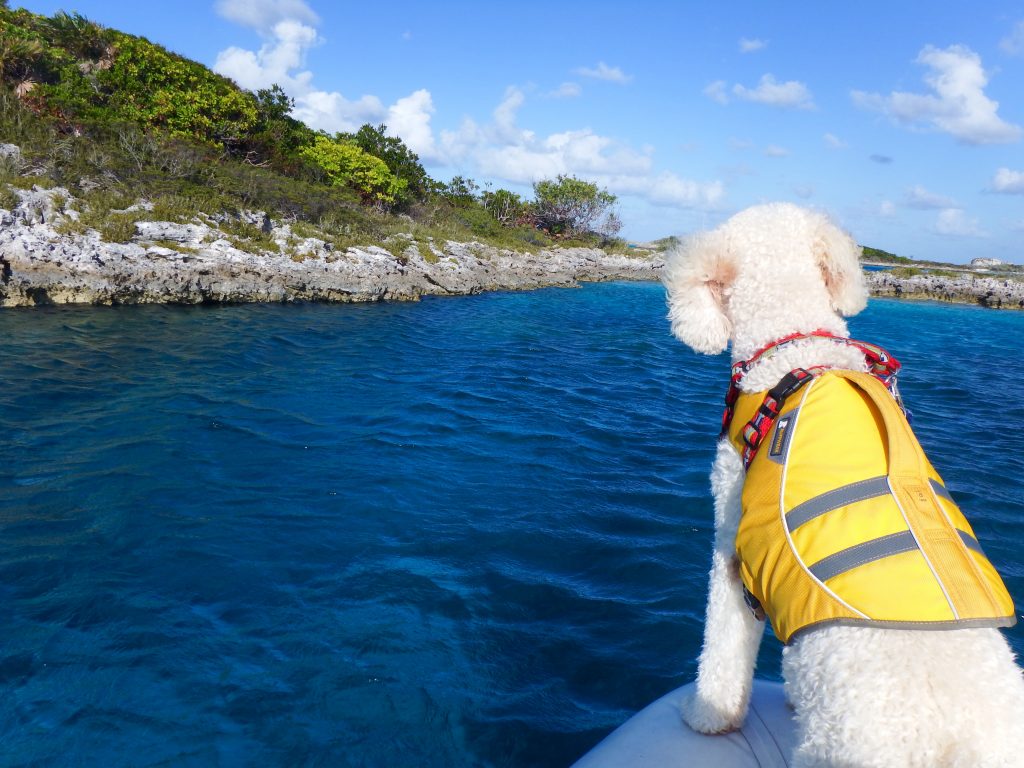 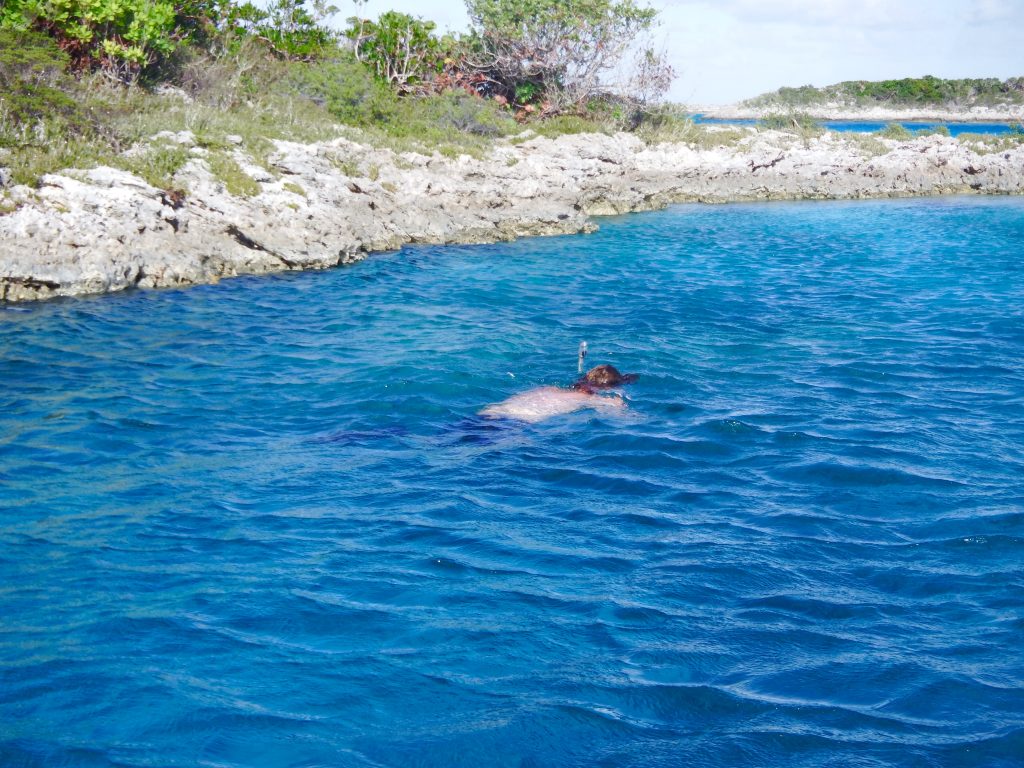 As we passed near the cut to the Exuma Sound by Cambridge Cay, where the waves were high and choppy, our dinghy engine suddenly quit. Mark is proficient at fixing motors, but he could not get it started. We were bouncing around and water was splashing into the dinghy while he attempted to restart the engine but we soon realized we had to get ashore quickly to get out of the waves in the cut. In the Land and Sea Park, except for Warderick Wells where the park rangers stay, almost all of the cays and islands are uninhabited. While we always bring a handheld VHF radio with us in the dinghy, unfortunately this was one of a handful of times over eight years that we forgot it so we were unable to call for help. However, we were fortunate to be near Bell Island, owned by Aga Khan, the leader of the world’s Ismaili Muslim community. His purchase of Bell Island was quite controversial, since it is in the Land and Sea Park, the one area of the Bahamas left that is kept in its natural state as a “no take by land or sea” zone. The Aga has dredged a marina for his megayacht and built a mansion and other buildings on the island.

Because this was the Aga Khan’s island, it was probably the only one where we could hope to find someone who could help us. Mark and Peter rowed through the waves to a small sandy beach on Bell Island, surrounded by mangroves and sharp rocks. We had protection from the large waves on the east side of the hill pictured below. We knew there was civilization on the west side of Bell Island, so Mark took off walking through the mangroves and sharp rocks. Luckily we had all brought hiking shoes. Peter, Sailor and I stayed on the beach and waited. Even Sailor knew something was wrong because he was on a beach but just stayed near us, rather than run back and forth like he usually does. 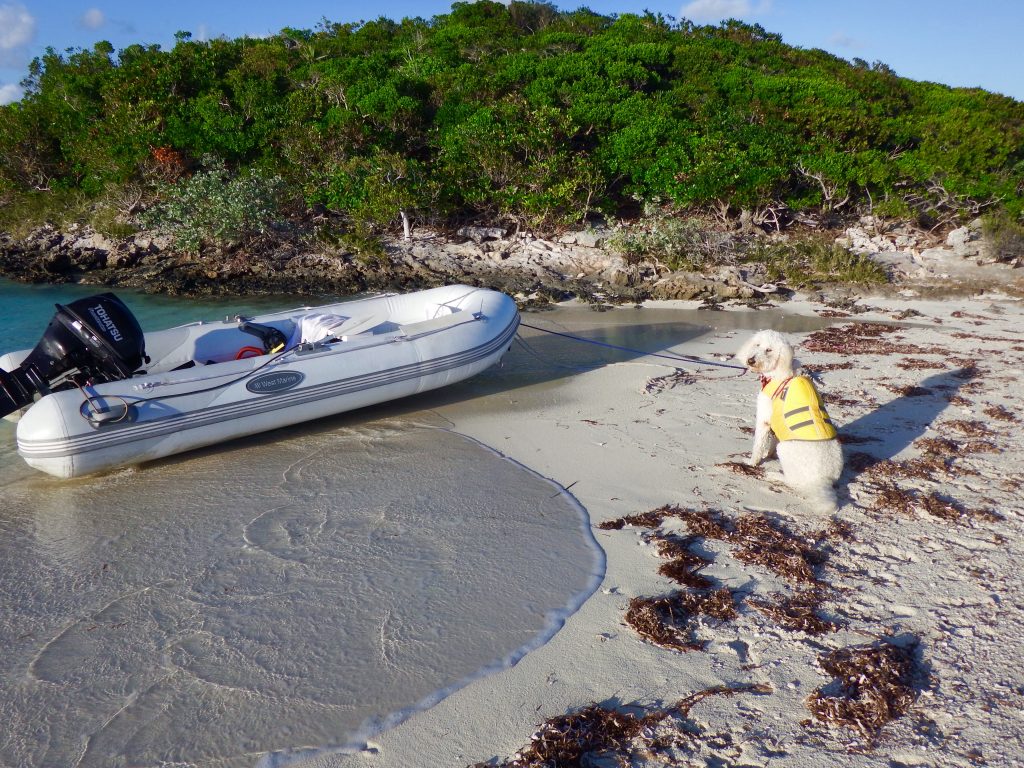 Periodically, Peter walked to the top of a hill and said he could see buildings and a few workers on the other side of the island but didn’t see Mark. By now it was late afternoon and we hoped we wouldn’t be sleeping on the beach. We could see our boat in the mooring field, but it was far too rough to attempt rowing there. We had almost given up hope when Mark came around the end of the island in a large open boat with two powerful motors and a Bahamian at the wheel. He was a maintenance worker on the island and kindly towed us back to Seas the Day. We gladly gave him $50 and thanked him profusely for saving us. I doubt that he expected any money, but he certainly earned it! If not for the kindness of this Bahamian, we would have been sleeping on the beach. We were incredibly lucky that the motor died where it did. I believe a guardian angel was watching over us that day. 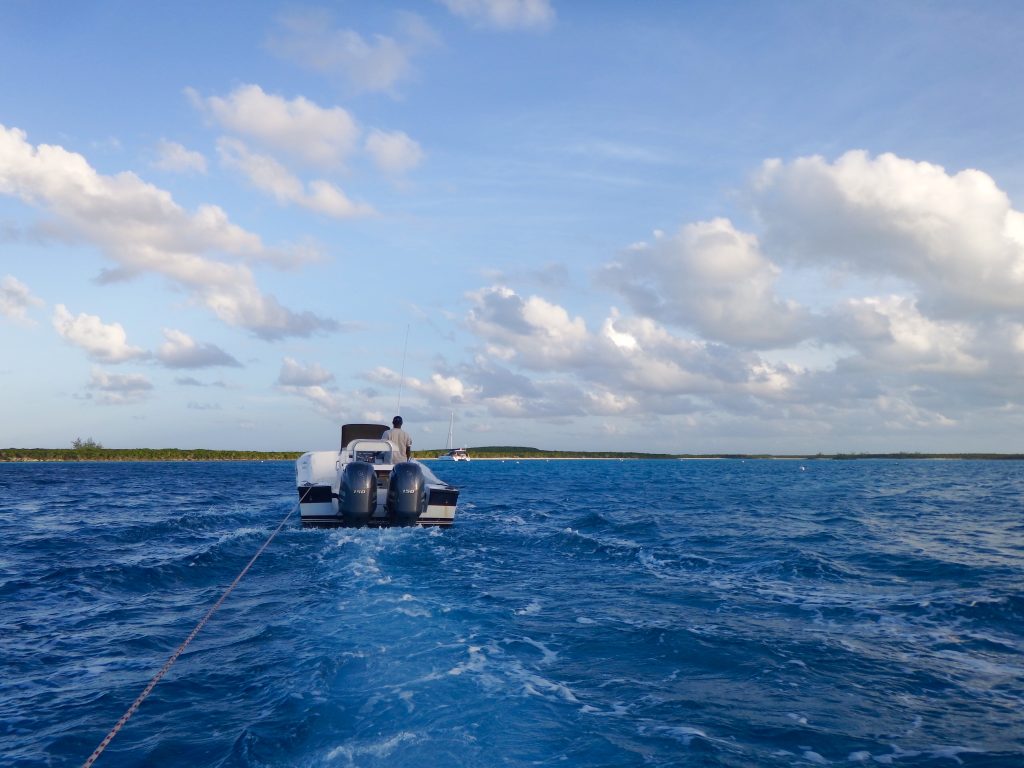 After this harrowing experience we decided to leave the park the next morning and move on to more populated Big Majors Cay and Staniel Cay. This meant we couldn’t snorkel in one of our favorite spots at the Rocky Dundas Grotto or visit the Bubble Bath on Compass Cay, but the water was too rough and high tide for the Bubble Bath, when waves crash over the rocks from the Exuma Sound into a small pond on the other side creating numerous bubbles, would be in the late afternoon the next day. Most importantly, we had no way to get to either of these without the dinghy.

We hoped that Mark could find out what was wrong with the dinghy motor, which is only one year old, when we arrived in the anchorage at Big Majors Cay the next day. If not, we wouldn’t be going ashore again until we arrived in Georgetown where we could ride on a water taxi to town and possibly bring the motor to a repair shop. When cruising, a dinghy is our “car” and our only way to go ashore. We do have two kayaks and an iSUP, so we could possibly use them to get off the boat, but with the high winds we had on the entire trip so far, and choppy water conditions, it wouldn’t be the preferable mode of transportation. We are fortunate that Sailor will “go” on the boat, using the trampolines on the forward deck. However, we were looking forward to snorkeling in Thunderball Grotto at Staniel Cay, showing Peter the swimming pigs, and eating lunch at the Staniel Cay Yacht Club.