While we love the simple life of being anchored next to a small Bahamian island with deserted sandy beaches, after awhile we do miss some of the creature comforts and conveniences we enjoy in the States. That’s just one reason we are in Spanish Wells for at least three weeks before we return to Florida.

Located northwest of Eleuthera and south of the Abacos, Spanish Wells, the only town on St. George’s Cay, and its neighbor Russell Island have a combined population of about 1600. They are connected by a short narrow bridge. The people are mostly white native Bahamians, descendants of British who came in the 1600’s and Loyalists from the 1700’s. Spanish Wells is very different from the towns we visit in the Exumas.  Most of the islands in the Exumas are sparsely populated and have very few onshore facilities.  Spanish Wells is a much more developed town. The main business is fishing and the large fleet of fishing boats here provide shrimp and lobster for Red Lobster as well as many other outlets. In fact, Spanish Wells exports more lobster than all of the other Bahamian islands combined. Lobster and shrimp seasons are over in the Bahamas so during the coming months the fishing vessels will be painted and repaired.

There is very little tourism here, although it is a short water taxi ride to trendy Harbour Island. There are plans to build a Jack Nicholas designed golf course with luxury estates, a spa and resort, a marina, and upscale restaurants on nearby Royal Island, which is a popular place for cruisers to anchor in  the protected bay before heading to the Abacos. The project has already begun and when completed will certainly give Harbour Island some competition but probably won’t affect Spanish Wells, which is a five minute boat ride away. A number of Americans, Canadians, and Europeans own homes in Spanish Wells and spend the winters here with some becoming permanent residents. The homes range from small cottages to large estates and all are very well kept, most with beautifully landscaped yards. The roads are paved and the town is very clean. It’s obvious that the town is prosperous and there seems to be plenty of work for the residents. Unlike many of the Exuma islands, it is rare to find buildings that have been started and abandoned when the money ran out. There are construction crews working around the town building new homes and the craftsmanship is outstanding. In between many of the houses in Spanish Wells there are sandy paths to the 2 1/2 mile long ocean beach and there are also several parks on the beach. At low tide it is a long walk out to water and then it remains shallow, a perfect beach for fetching a wubba. 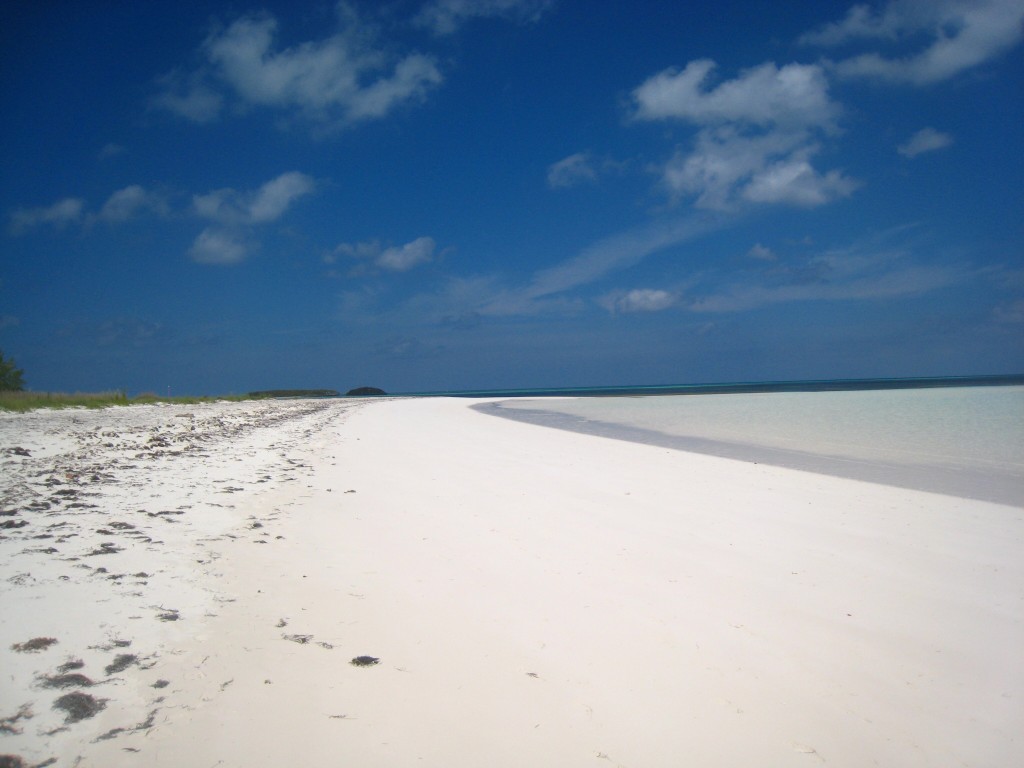 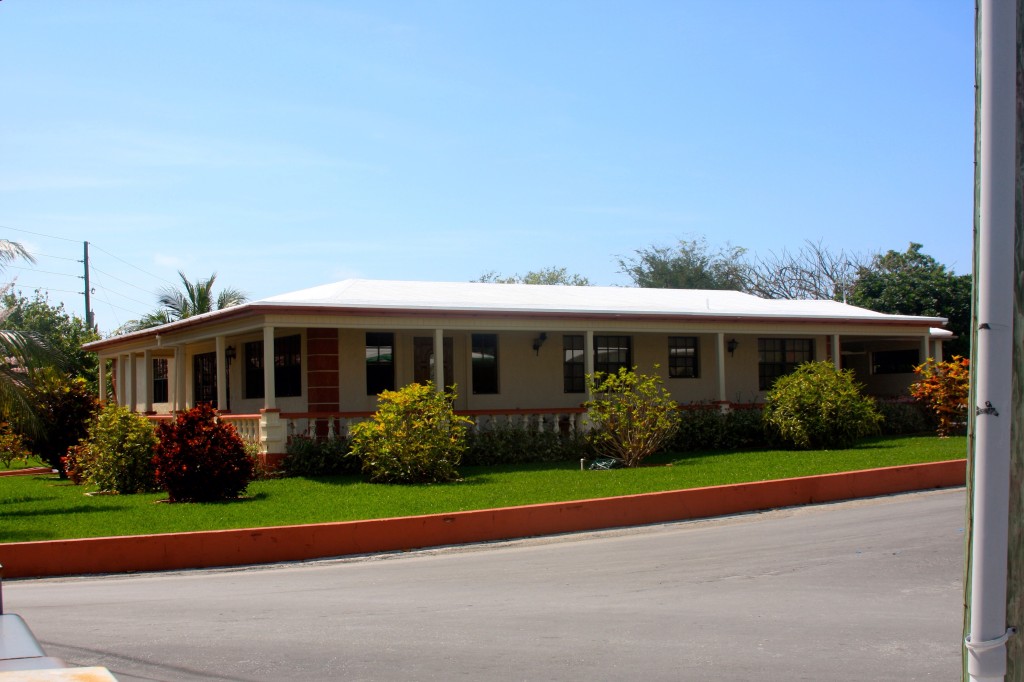 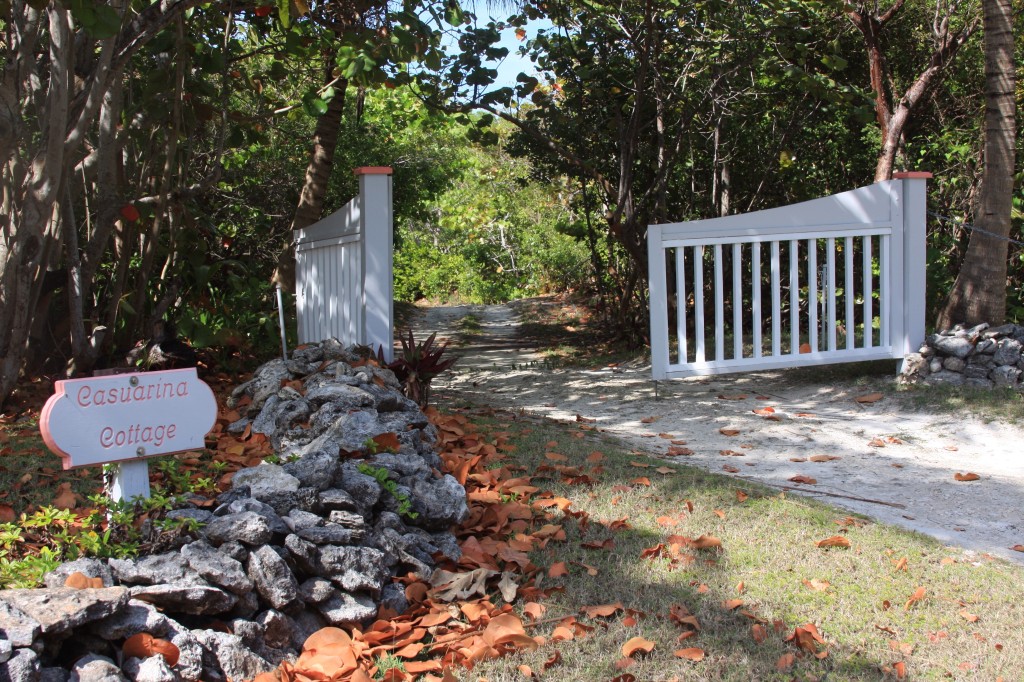 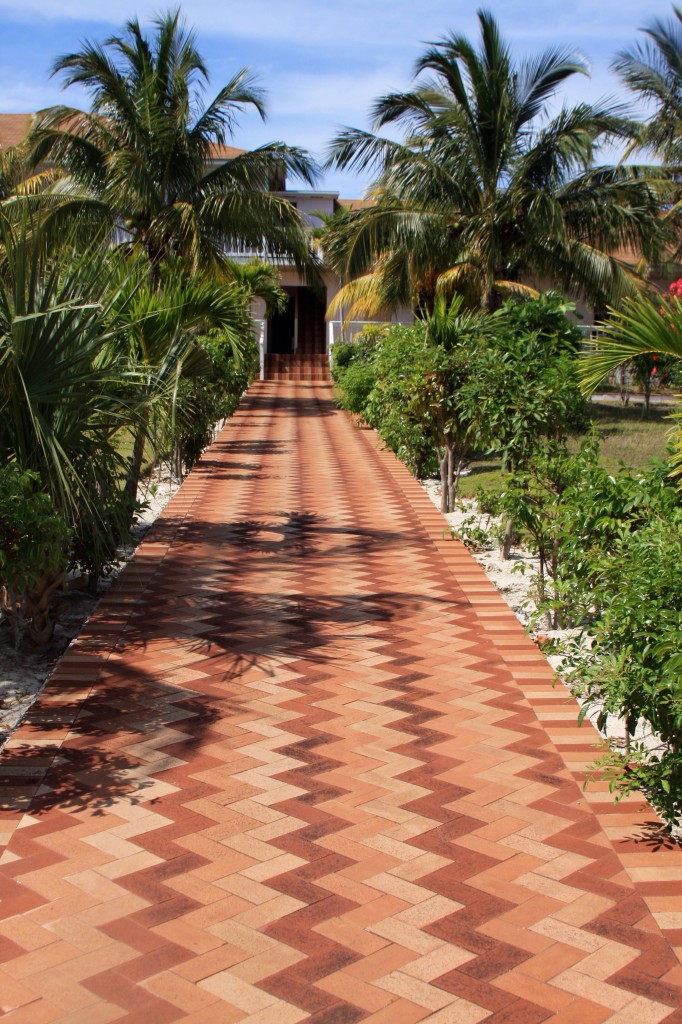 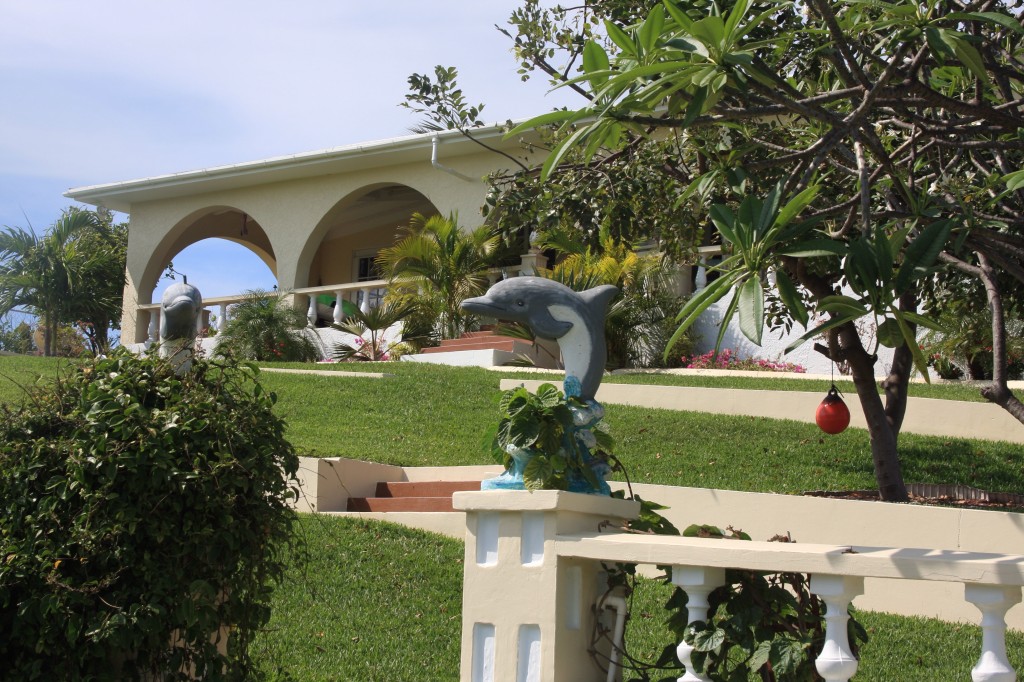 Along the mostly commercial road by the harbor, called South Street, there are marine and hardware supply stores, golf cart and car rentals, gift shops, an excellent seafood market, restaurants and take-aways (takeouts), a customs and immigration office,  a small grocery store and even a boat lift where the commercial fishing vessels and pleasure boats are cleaned, painted and repaired. In 2010 we had our boat hauled out and the bottom painted here. It’s not unusual to see boats on the lift from Florida and other US cities.

In other parts of town there are more businesses, most located on Main Street which runs parallel to South Street, including a dive shop, several clothing stores, restaurants, churches, coffee shops, a Batelco office, a bank, an auto shop, a government clinic, a computer store, bakeries, a dentist, a canvas shop, hair salons, a homemade ice cream shop, a law office, an appliance store, a realtor, a cemetery, a small museum, and a large IGA type grocery store.

There are small ferry boats that take passengers to Eleuthera and Harbour Island and also a large “fast ferry” catamaran that makes the trip back and forth to Harbour Island once a day from Nassau with a stop in Spanish Wells.  There are nearby reefs for diving and snorkeling and the harbor is perfect for kayaking.  While we don’t fish, this is an excellent area for sports fishing on the ocean with world class bone fishing on the flats around Spanish Wells. The well protected mooring field where we are staying is a few boat lengths away from the docks along the harbor road and only has eight balls. There is also a marina, Spanish Wells Yacht Haven, that is currently doing major renovations with several brand new buildings. Below are photos of the mooring field and a small section of South Street across from us where the fishing boats dock and some of the commercial stores are located. 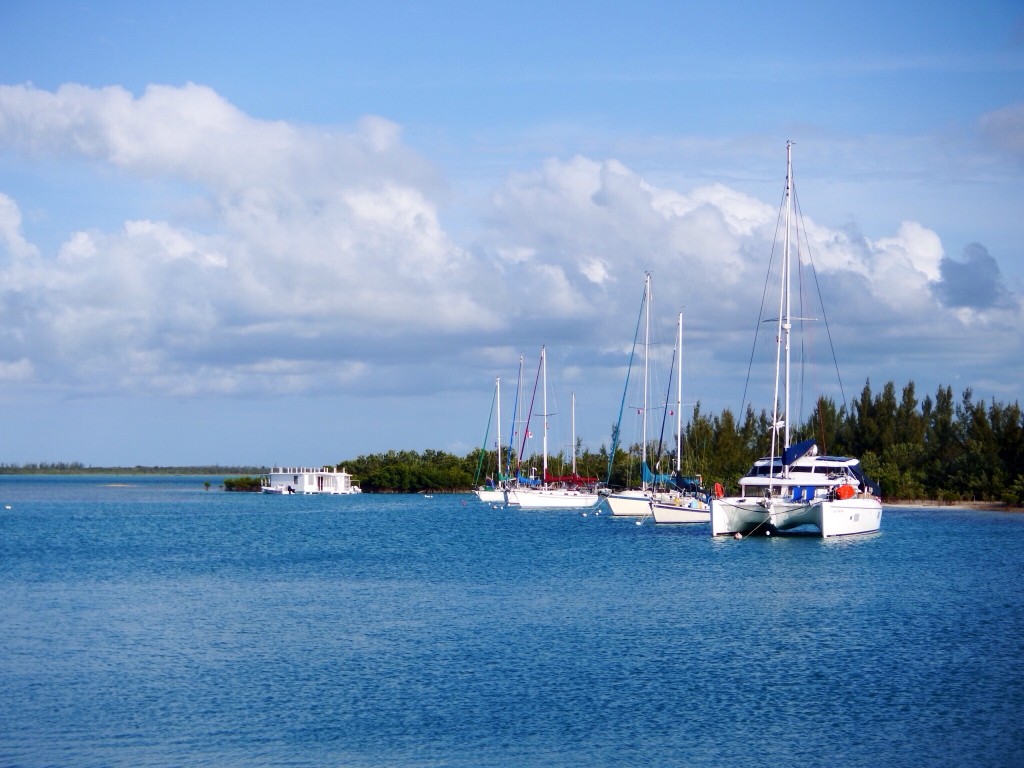 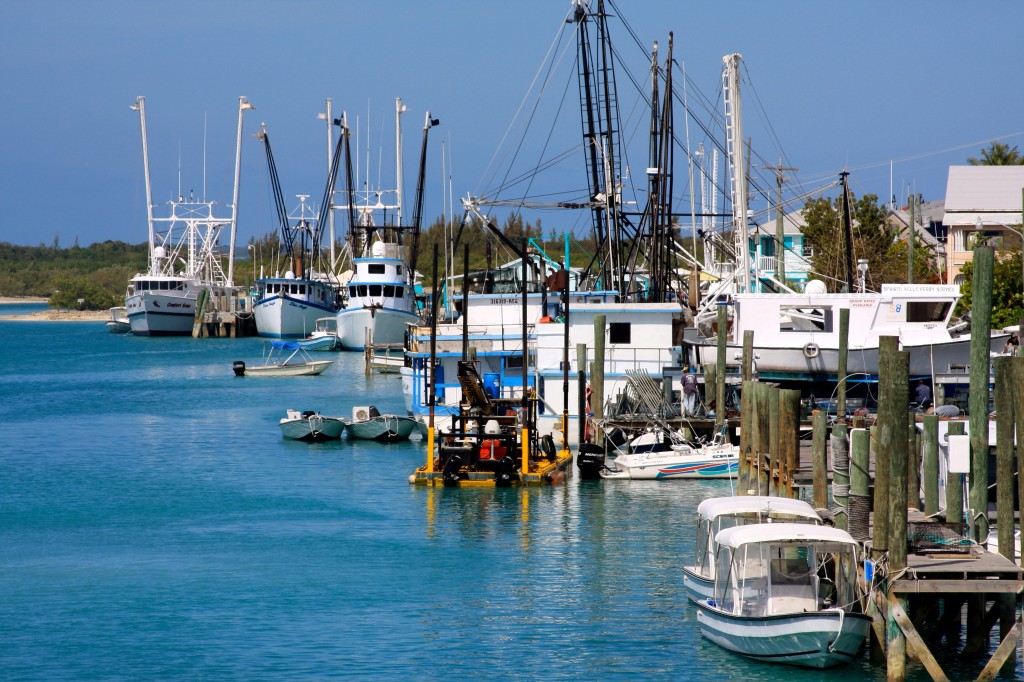 The mooring field is home to a family of dolphins who come by frequently to entertain us.  As always, it’s impossible not to run out on deck when we hear them splashing in the water. 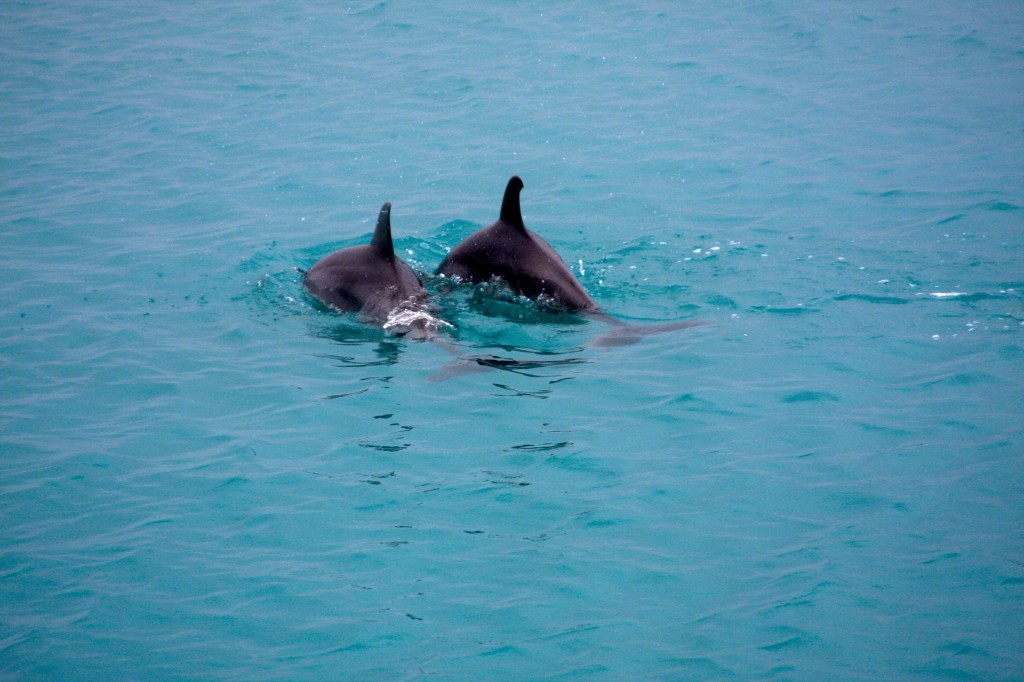 It might sound like I have just described a large thriving metropolis, but Spanish Wells is a small town with very friendly people. Most houses have a golf cart in the driveway as well as a car and the golf carts probably get more use. The grocery store is the largest we have seen since Nassau and it is well stocked with everything we need. Most of the other stores are small although very well supplied. There is a liquor store here but no bars. We have heard that the residents do not lock their doors and that crime is nonexistent. Perhaps that is the reason the police car is a golf cart.

In the past we rode our bikes around Spanish Wells, but this year we are hesitant to leave Sailor alone on the boat while not at a dock, so he comes everywhere with us. We decided to rent a golf cart for the time we are here and are finding it very useful for getting around town. The nicest beach area  is too far to walk with Sailor, and he has discovered that while he doesn’t like riding in cars very much, he LOVES golf carts.  After racing up and down the beach fetching his wubba, Sailor is ready to relax for awhile while we read in the shade of our beach umbrella. Another advantage of having the golf cart is we can bring chairs, an umbrella and other items to the beach. Driving on the paved streets is very easy and we return friendly waves to all of the cars and golf carts we meet. 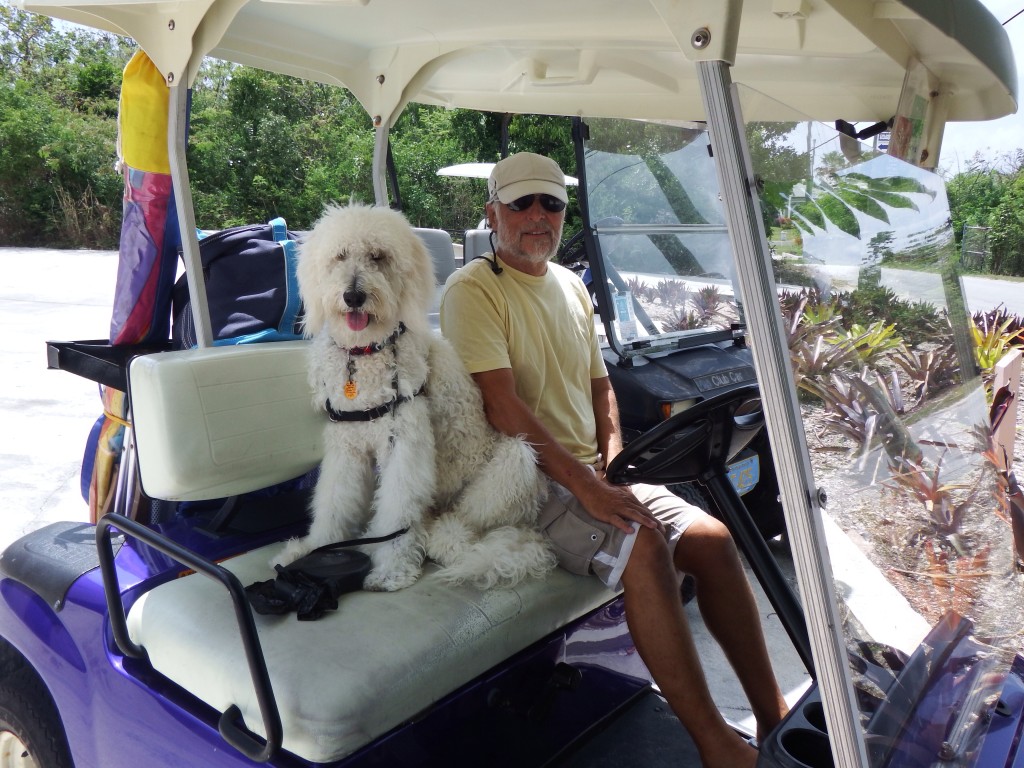 We were pleasantly surprised to find that there are three dog groomers in Spanish Wells.  Sailor desperately needed a haircut,  as can be seen in the two photos above, so a few days ago we took him to one of them and he got a nice summer cut.

Of course one creature comfort I have been missing is Starbucks.  Several coffee shops here sell their version of frappuccinos, and I must admit they are very close to what I’ve had at Starbucks. 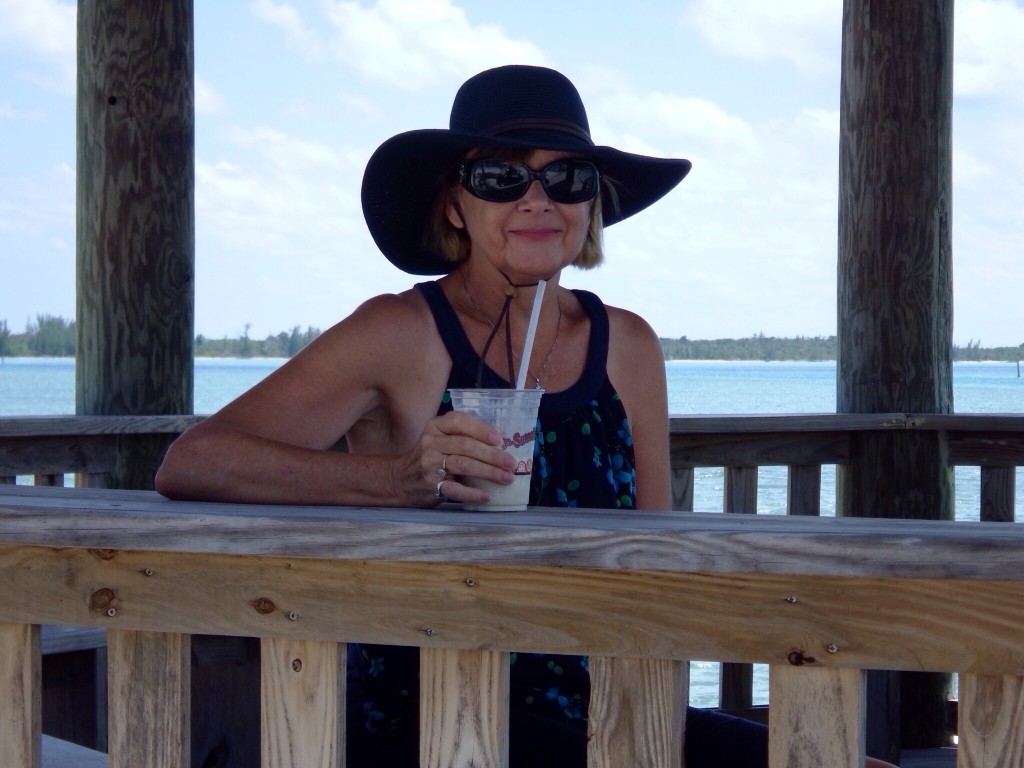 Spanish Wells seems to be a perfect blend of tropical living without giving up too many creature comforts. It is a great transition to ease us back into life in Florida. In good weather it is a three day sail from here to Lake Worth.  However, we still have the rest of May to enjoy the Bahamas.