Yesterday the riggers finished most of what they broke on the boat.  After they left Mark had to fix some more of the electronics that weren’t working.  Just when he thought all was well, he noticed the chart plotter screen getting dimmer and dimmer.  We don’t know if it had anything to do with the other electronic problems caused when cables were cut, but regardless we realized we had to replace it.  Unfortunately in the five years since we installed our Raymarine E120 chart plotter, the company has completely changed their chart plotters and they are now digital.  The only way to get the display fixed is to send it to Raymarine to be repaired, or we can buy a used one online.  We did the latter and located one about an hour and 15 minutes south of us near Ft. Lauderdale.  We purchased it and are driving down there to pick it up tomorrow morning.  That is one advantage to being on the east coast of Florida.  There were actually three displays on eBay located within an hour and a half drive of Stuart.  All were probably removed when the owners replaced their units with the new digital model. 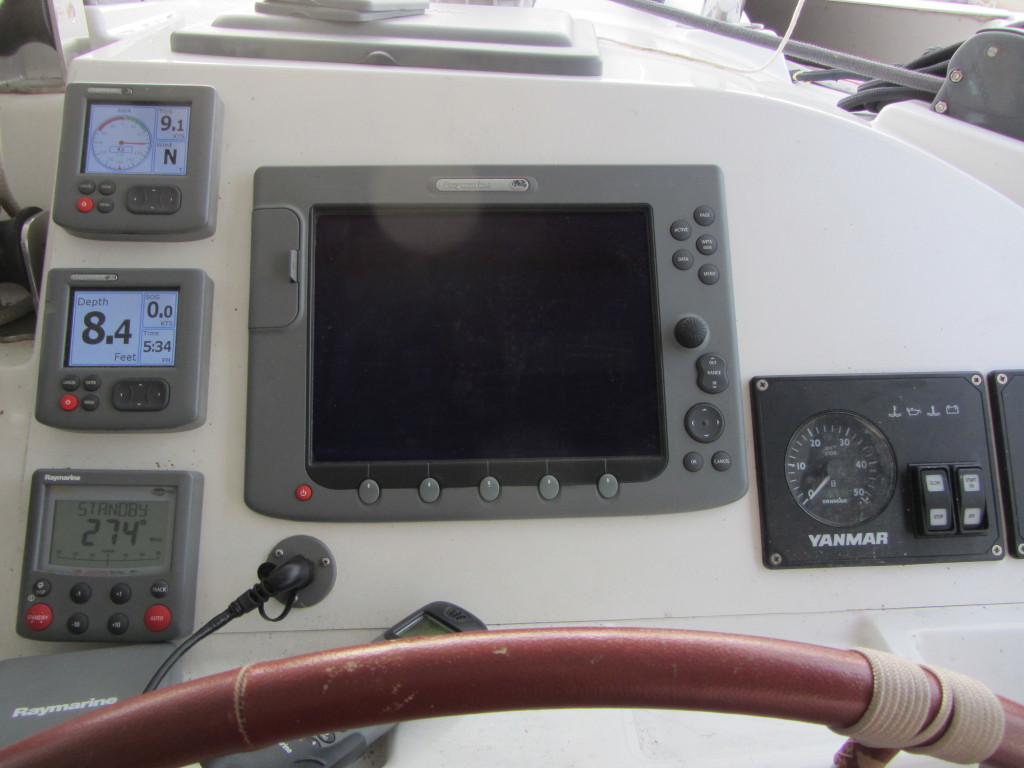 If we could have left this morning, we would have been in Miami on Monday and could have sailed to the Bahamas on Tuesday when the current weather pattern is good for going across.  Starting Wednesday, not so much.  We subscribe to Chris Parker’s weather forecasts, Marine Weather Center. He sends out detailed marine conditions for the US East Coast, Bahamas, and Caribbean.  He also does a daily weather webcast which is simultaneously broadcast on SSB radio.  Here is part yesterday’s email forecast.

Miami to the Bahamas is the south route.  If we leave on Monday and get to Miami on Wednesday, we will have missed the current weather window.  It gets worse.  Here is what he said about the coming month of March:

OUTLOOK for MARCH: Winter continues! S Branch of JetStream is active, and ColdFRONTs/possible LOs may form and/or track along GOMEX-FL-N Bahamas & waters N of Bahamas…and waters near or even S of Bermuda. March may bring a cycle which repeats every 7 days: 1-3 days of LO/FRONT/TROF with nasty weather (possible GALEs, at-least in squalls) along the axis detailed in previous sentence…forcing wind-less RIDGE S of 25N. 1-3 days of brisk N<E wind following FRONT in all of W Atlantic including ALL Bahamas & FL. 1-2 days of pre-Frontal clocking S<W wind ahead of next impulse mainly N of 25N / S of 25N moderate E<S wind. Then cycle repeats.

Miami is at 25N.  So we may be waiting for awhile in Miami, but that is not new.  Unfortunately if we could have left earlier in February, there were multiple days of good crossing weather.

Dolphins cannot help but bring a smile to your face and no matter how many times we encounter them, we have to stop and watch.  Today they were playing in the marina by our boat tossing fish back and forth to each other.  I didn’t get a shot of that, but I did get a picture of one dolphin diving. We needed a reason to smile. 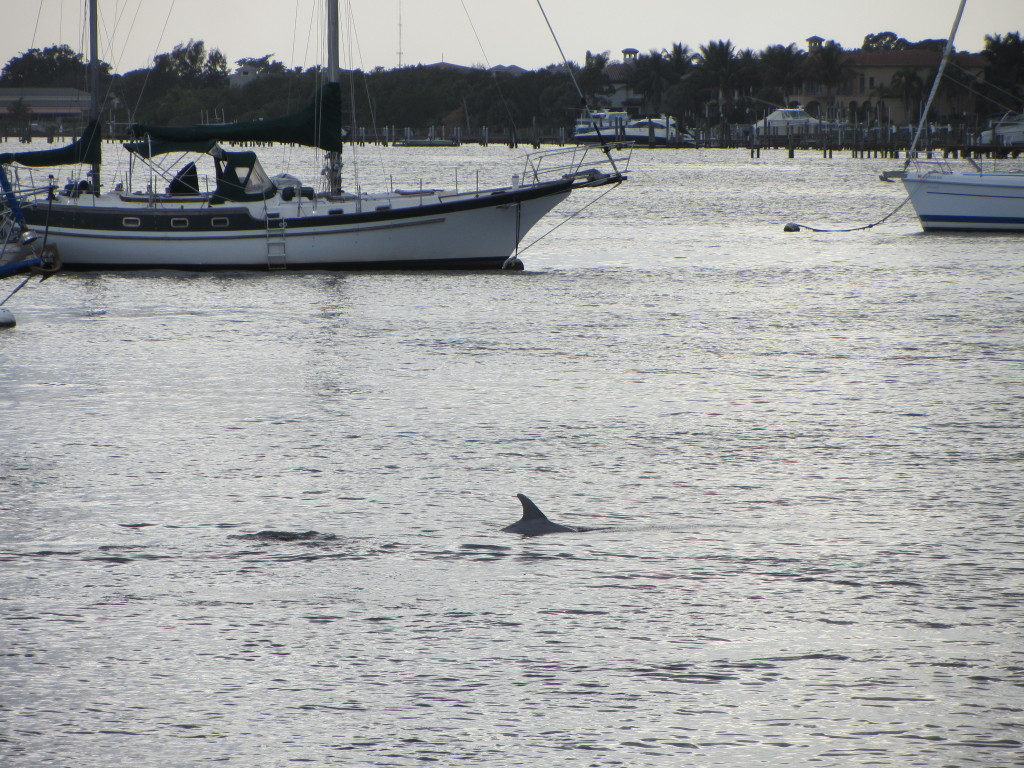 Sailor has learned a new trick.  When a window in the salon is open, he likes to jump up on the couch, stick his head out and watch what is going on. He’ll have a lot to look at when we finally leave the dock. We’ll definitely need to keep him tethered and in a life jacket because he doesn’t get that he can fall in the water. 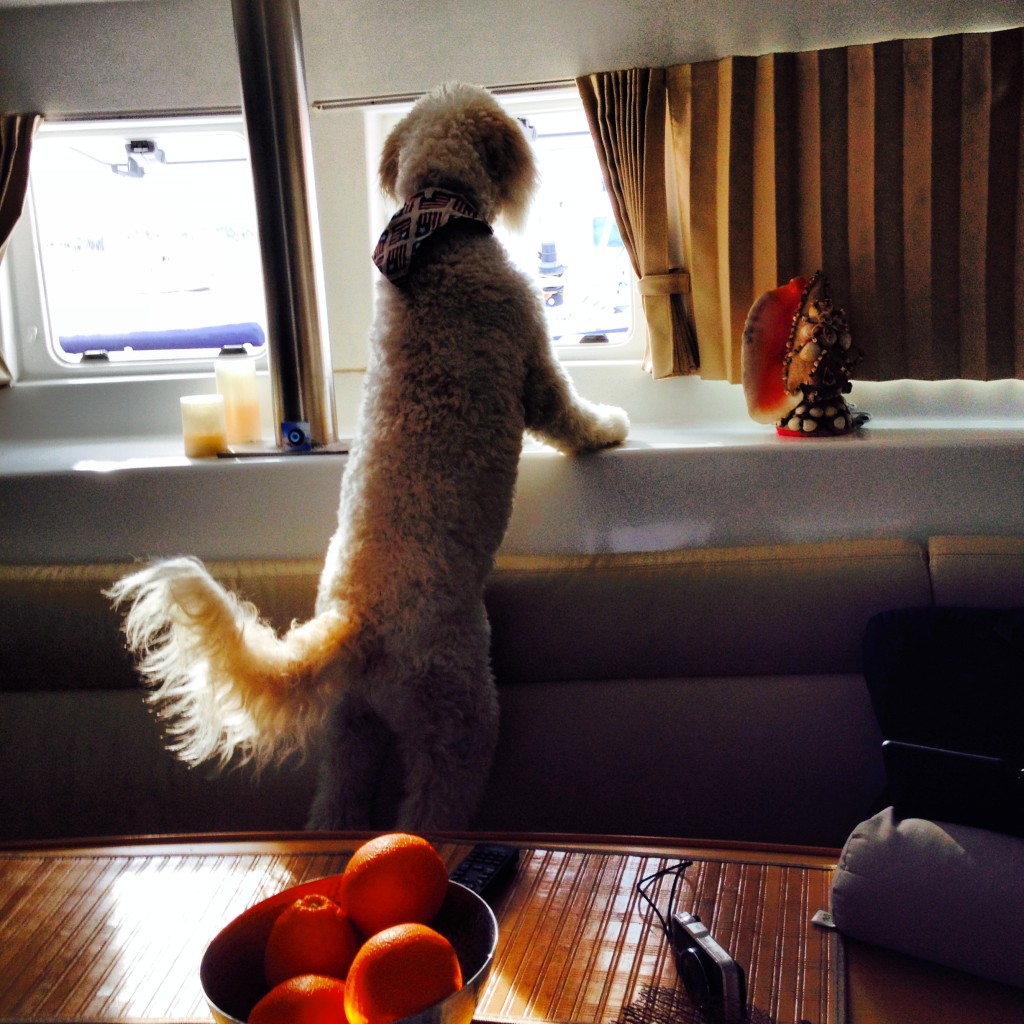 He does the same trick from outside standing on the foredeck and looking into the salon.  He hasn’t tried to leave or enter through that window……yet. 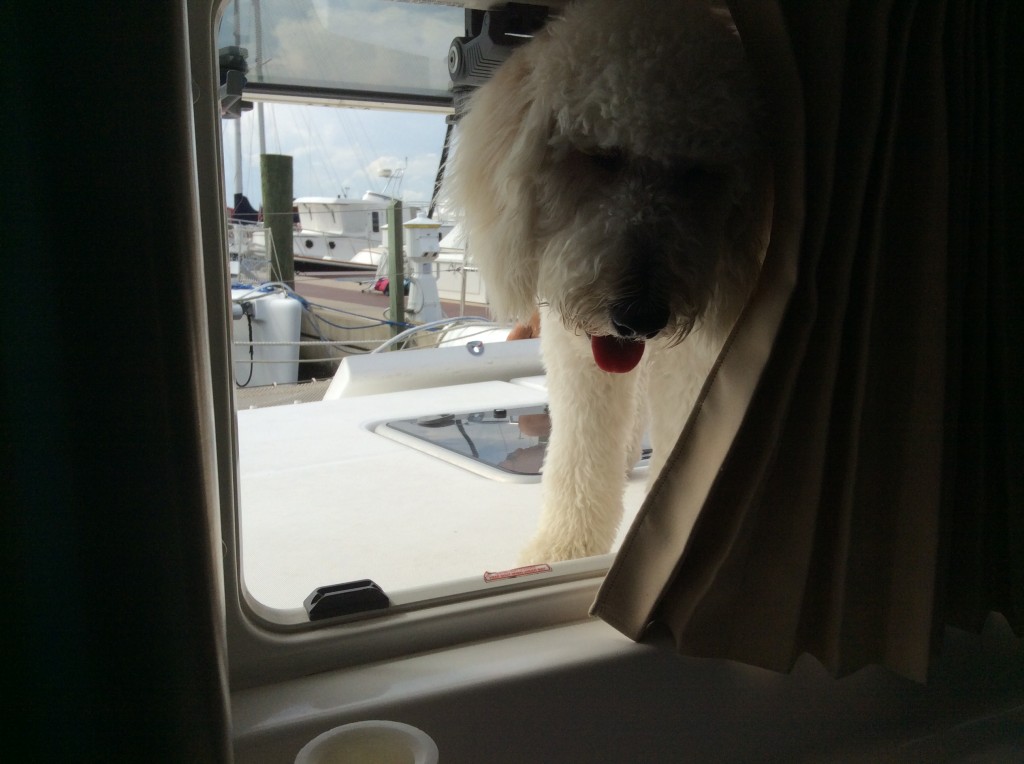