Since the seas in Bimini were about 8-10 feet Friday night, we decided to check Saturday morning when we got up and if the seas were down we could go anchor at nearby Cat Cay, then leave Sunday morning for Chub Cay.  However, when we checked at about 0600, the seas were down considerably so we decided to leave.  At 0630 Saturday we were on our way.  It was a bit rough coming out into the ocean, but when we made the turn and got on the Great Bahama Bank where the depth is under 12 feet,  we had smooth seas the rest of the day. When we reached the Northwest Channel Light (there isn’t really a light there but it is marked on the charts) the depth went from 15 ft to 2000 feet within a few minutes because we left the Bank and returned to the ocean.  The wind picked up early in the day and we had a perfect beam reach making it possible for us to average 7.5 kts motorsailing, arriving at Chub Cay at 1750 with plenty of daylight left.  There is nothing to do on Chub, but Sailor got a walk on a new beach.

Daylight Savings Time started today, so we didn’t get started from Chub until 0730 when it was light.  Again, the seas were smooth and we made good time averaging over 7 kts. We entered Nassau harbor at 1235 but it was 1330 by the time we got in our slip at Nassau Harbor Club. This is the first time we’ve stayed here because they only have a few slips wide enough for a catamaran.  We stopped for fuel  at another marina and had to wait in line.  Diesel was $5.05 a gallon, which will probably be the norm for the Bahamas.  We paid $3.85 in Miami. When we got to the marina they had us back into a very tight slip.  We were almost in until we got stuck between posts on either side of the slip.  We had told them we are 24 ft 8 in wide, but I guess they don’t measure the slips.  We got out and the dock boys directed us to a slightly wider slip which we easily backed into.  Power is metered at 60¢ a foot so we will use it sparingly tonight and tomorrow morning.

As soon as we were settled in, we walked across the street to a Fresh Market grocery store.  It has to be the nicest grocery in all of the Bahamas.  You would swear you are in the States.  The produce department is fantastic and that is mainly what we purchased along with frozen lemonade, milk and yoghurt.  Prices were close to Florida and no doubt everything was shipped in from the States. Brands were identical. I didn’t expect to see fresh strawberries here, but I did and they were exactly what I buy in Florida.  (Hopefully my strawberry plants will start producing more berries.  Right now I only get four or five a day.)

Water is $8.00 for the day.  At Bimini Sands it was metered, so we didn’t use theirs.  Since we paid for it here whether we use it or not, we’ll give the boat, and Sailor, a good wash.

Sailor learned a new trick today.  He now goes in and out of the windows in the salon.  We haven’t seen him negotiate jumping in and out because he’s sneaky and quick. When we are anchoring or coming into a dock, we leave Sailor inside, but he quickly began getting up on the salon couch, standing on his hind legs, putting his front paws on the shelf under the windows and looking out the windows which are usually open. Now, I guess we’ll have to shut the gate AND the windows!

Tomorrow the weather looks good for sailing to Highbourne Cay.  Usually it takes us about five hours so we’ll sleep in and leave around 11 am.  We’ll be on the Great Bahama Bank again until we go out on the Exuma Sound for a short sail to get to Georgetown.  The water is crystal clear and tomorrow we’ll probably see starfish on the bottom.  Our destination is the Exumas and tomorrow that’s where we’ll be.  Most of the islands where we stop from now on will have deserted beaches, so Sailor will get to run and maybe swim.

After dinner tonight we walked across the street to Starbucks and then walked around the strip mall.  There are many familiar stores, including Radio Shack, GNC, Dominos Pizza, Dairy Queen,  two computer stores, a few restaurants, clothing stores, a book store, a bank,  a sports clothing store, a coffee shop, a drug store and a few more.   All this is just steps from our marina.  We’ll probably go there in the morning for one more “last frappuccino until June.”

Below are pictures from the last few days.

Sailor took his watch at the helm.   Autopilot on of course so all he had to do was watch for other boats and luckily they were few and far between. 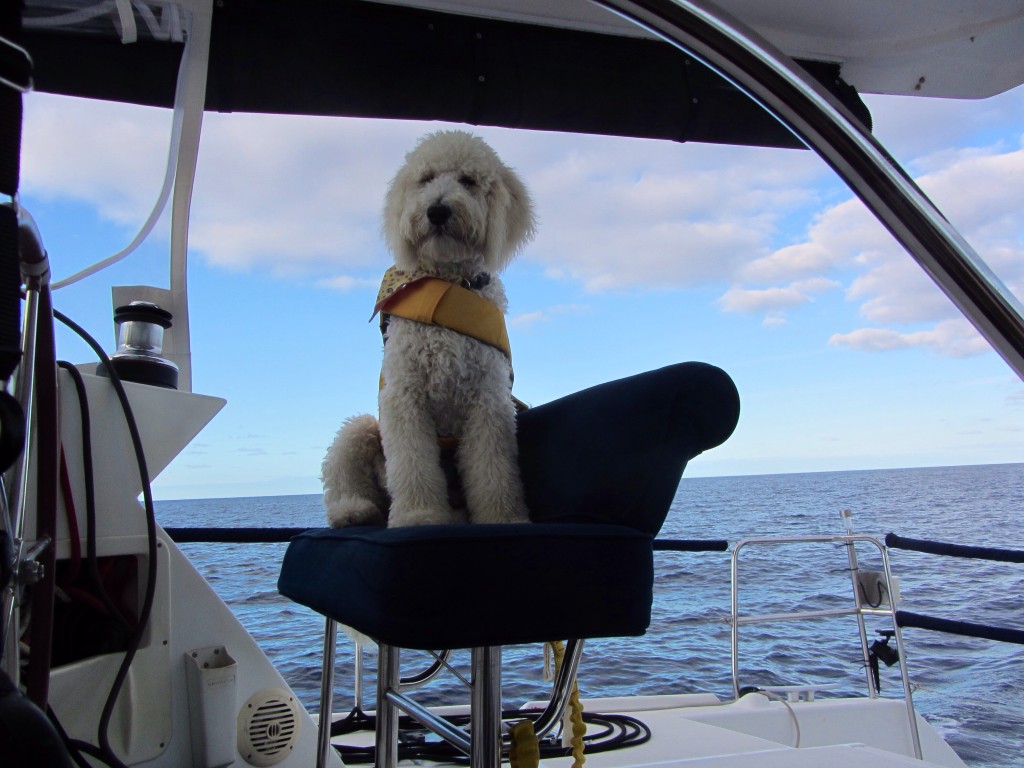 Leaving our anchorage at Chub Cay this morning.  The small anchorage is on the other side of the land open to the ocean, and many fast boats leaving a marina creating large wakes. 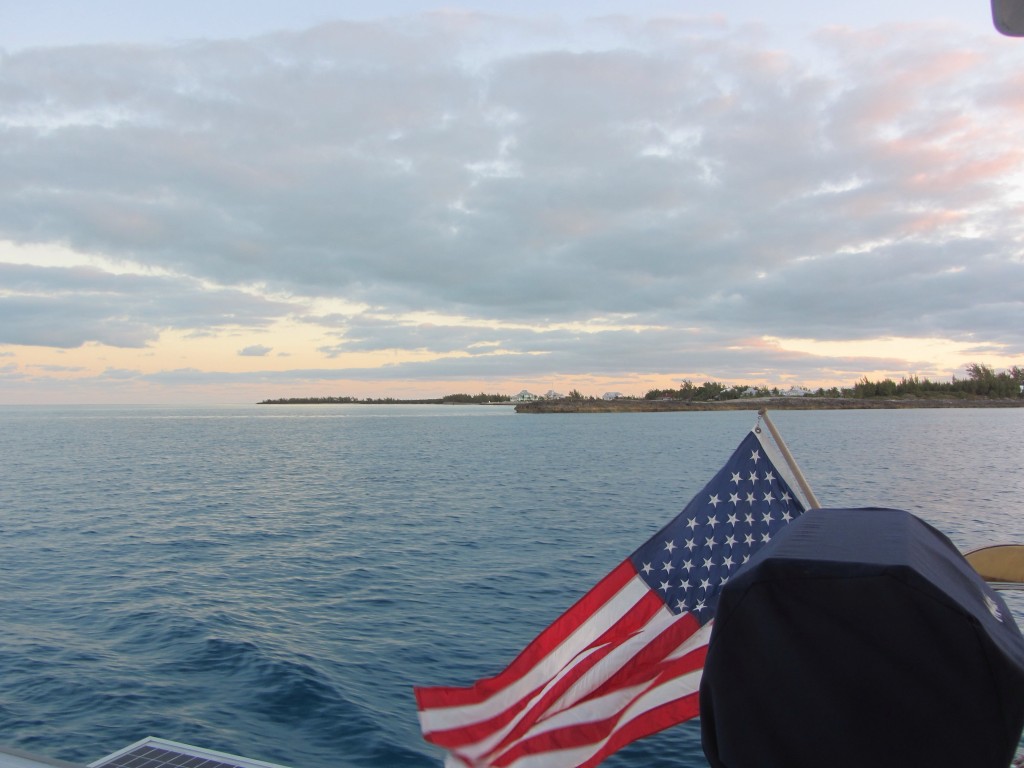 This is our slip at Nassau Harbor Club.  A megayacht came in after us.  One of the crew members came over and apologized for blocking our view, but we thanked him for blocking the wake from numerous speed boats in the harbor.  Then he told us how much he liked our boat and offered to trade his house in Ft. Lauderdale for the boat. 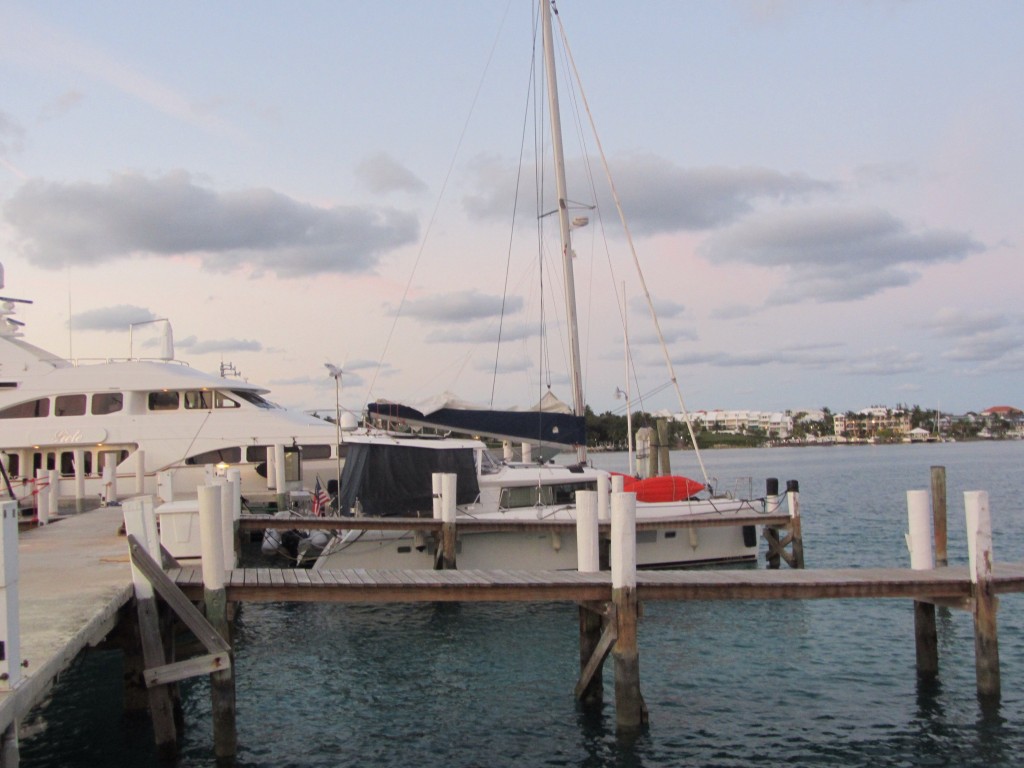 This is the pool at Nassau Harbor Club.  Looks great but we probably won’t take the time to swim in it because once we reach the Exumas we’ll be floating in water just as clear where we can swim off the boat. Can’t wait to try my “Aqua Jogger.”

This photo of Starbucks was taken from our marina across the street.  Now this is convenient.  The only problem is the drinks are $1.00 more than in the States. It’s just a few more steps to the Fresh Market grocery and all the other stores in the mall.

This is my second to last frappuccino until June.  One more tomorrow than cold turkey!