An early Spanish explorer found fresh water on an island north of Eleuthera, thus it got the name Spanish Wells. We arrived here on April 18 and took a mooring ball for a month. We also rented a golf cart and set up a time to have the boat hauled out and the bottom painted at R&B Boatyard. This is our fourth visit to Spanish Wells and we have always been on a mooring ball for a month. Spanish Wells is a nice transition for us before returning to Florida, after spending most of the cruising season in The Exumas. It’s still in the Bahamas so the town has a relaxed island feeling, but unlike most of the other islands where we stop, we can find almost anything we need here, including a large well stocked grocery store with reasonable prices, every type of marine service we might need, a large hardware store, several nice casual restaurants and a more upscale one, the above mentioned mooring ball and golf cart, Papa Scoops Ice Cream, a bank with a 24 hour ATM, clothing stores and gift shops, hair salons, a dentist, and even dog groomers.

We visit Papa Scoops almost every night and have their soft serve ice cream for dessert. They serve two flavors each night, available from 7:30 pm until 10:00. The evening’s flavors are listed on a posterboard sign on the main street near the shop or on the Papa Scoops Facebook Page, where there is a new photo of their current poster each day.  (Notice the sign from Sunday that says they will be “open after church.” The Sunday night services last until 7:30.) The open air building is next to their house and a young daughter of the owners, who live in the house next door to Papa Scoops, comes to your car, bike, or golf cart, takes your order and makes your soft serve treat. 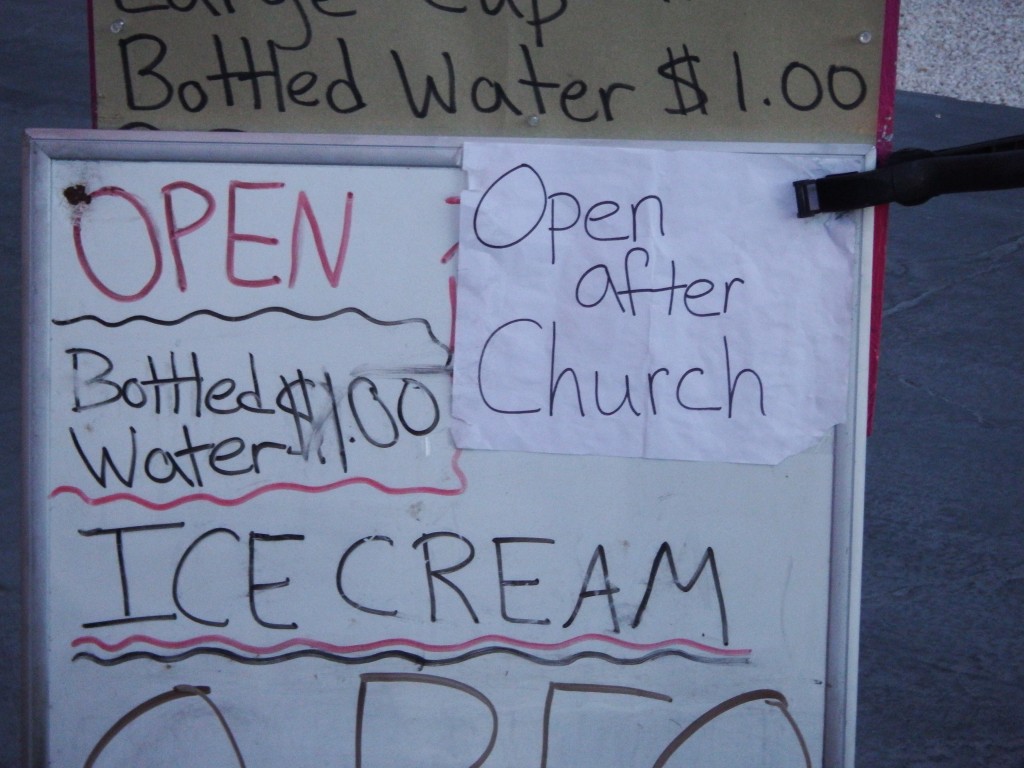 The first residents of Spanish Wells were English Puritans who traveled to  Bermuda in search of religious freedom, but apparently they wanted more and in 1648 a group called the Eleutheran Adventurers left Bermuda, headed for Eleuthera. They were shipwrecked on the dangerous Devil’s Backbone Reef and the survivors lived in a cave, now called  Preacher’s Cave, in north Eleuthera for awhile until some of them started a settlement in Spanish Wells. Most people living on the island are white Bahamians, descendants of those early Puritans and still very religious. They are a simple, hard working group of people with an unusual accent unique to this town. Until 1967 there was no electricity on Spanish Wells, more likely because they didn’t need or want it than they couldn’t have it. Now they have their own power plant on the island.  The commercial fishermen make six figure salaries and there is obviously a lot of money on the island and plenty of opportunities for becoming wealthy but you wouldn’t know it from observing their lifestyles. The lobster industry is the main employer and the docks are lined with large fishing vessels. Young men buy into ownership of the boats when someone retires or dies. The lobster season runs from August 1 to March 31 and the fishermen are gone most of that time. The fishing fleet here provides about 80% of the lobster served at the Red Lobster restaurant chain. In the off season most of the fishermen work other jobs. For example, a chef on one of the fishing vessels caters meals in the off season. You can go to his house and take home a meal or eat it on his front porch. Each week he posts a different menu on the Food Fair Grocery’s bulletin board on Thursday or Friday with four or five choices of entrees and you call his house or stop by to place your order for the Saturday night meals. This past Saturday, Mark and I shared a delicious prime rib dinner. A captain of one of the fishing vessels repairs diesel engines. In addition the fishermen spend time during the off season building new lobster traps and making repairs to their boats.

One of Sailor’s favorite activities here is riding in the golf cart looking for goats. We’ve noticed quite a few goats in Spanish Wells and nearby Russell Island, which is connected to Spanish Wells by a short bridge. At first we thought some enterprising entrepreneur was renting out goats to clear property, but that’s not why they are behind fences on empty lots. Recently we found out they are raised to be eaten! (We won’t tell Sailor.) As we ride down the streets here, Sailor’s nose is constantly sniffing, looking for the goats. I think he’s figured out they are always behind fences so when he sees a fence he gets more excited. All we have to do when we are driving down a steet in the golf cart is say, “Sailor, where are the goats?” and his head starts spinning around looking for them. 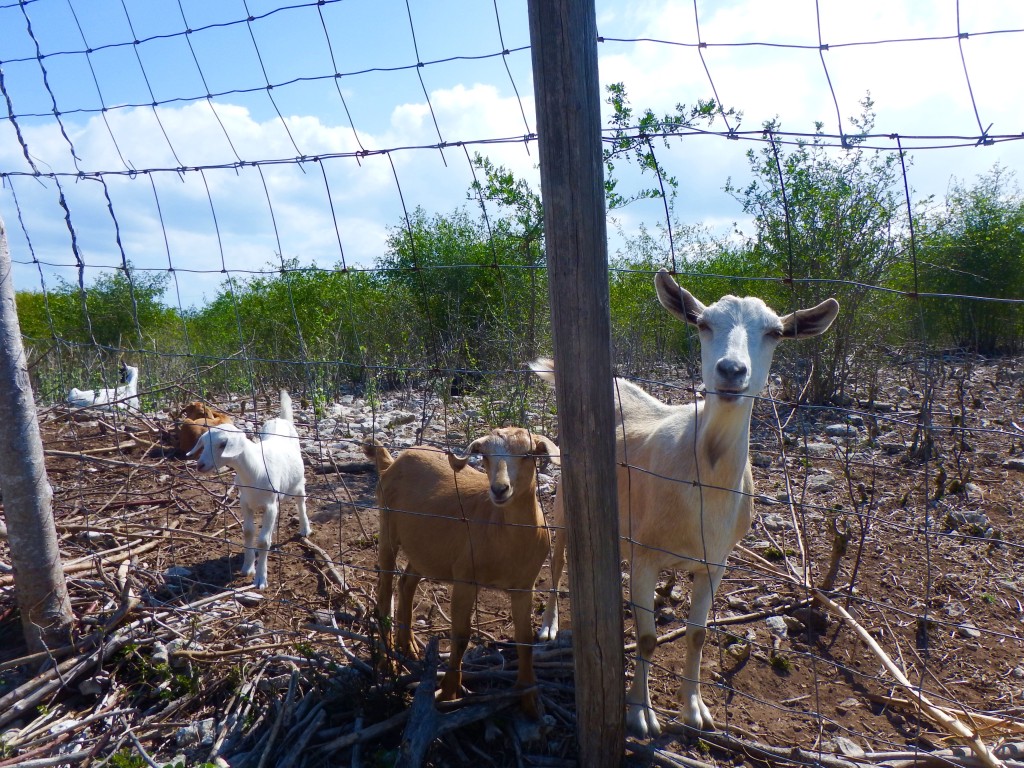 Sailor also loves to spend time swimming and fetching a ball on the beaches. Since he sometimes likes to take off running down the beach, he has to wear a 20 foot long floating leash so we can catch him while he’s racing past us. 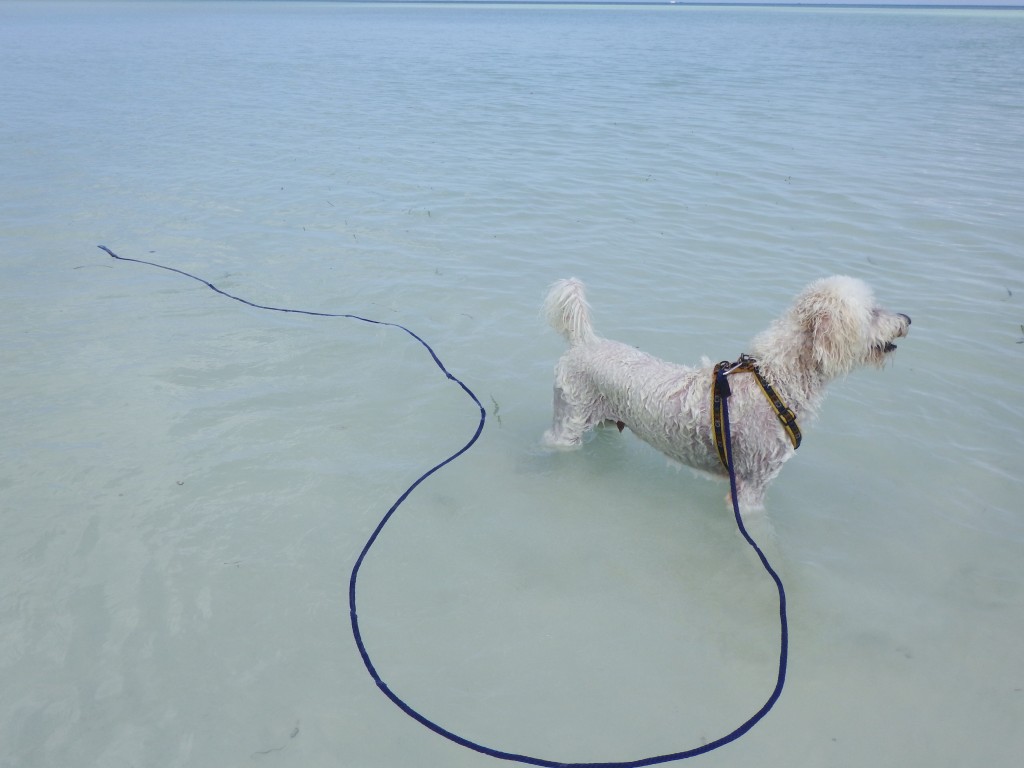 Until several years ago, Spanish Wells was dry. However, Eleuthera wasn’t and people regularly took the short water taxi ride there to purchase liquor. Now there are several casual restaurants  that sell drinks and food, Budda’s and The Sandbar. Neither would be considered a “bar.” We had the best cracked conch we’ve ever eaten at The Sandbar. Besides eating and drinking, you can swim, rest in the beach lounge chairs, or swing in a hammock. An upscale restaurant, The Shipyard, also serves drinks and has a very popular “Happy Hour” as does Budda’s. 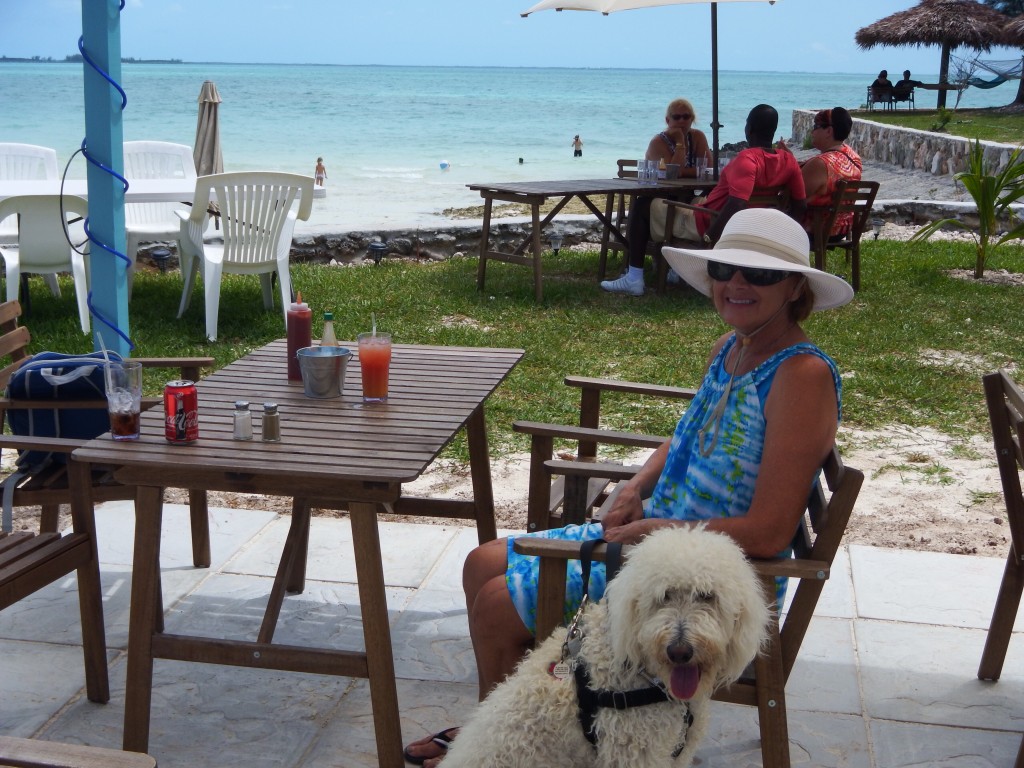 Last week we had the boat hauled out and the bottom painted. Due to rain, a three day job lasted a week. There is a unique lift system at the R&B Boatyard. We pulled into a slip that has a platform under it, a diver (the owner of R&B) dove under the boat and placed jack stands under the hulls to hold the boat upright and steady, the lift went up and the boat was above water resting on the keels and jack stands on the platform, ready to have the workers powerwash and paint the bottom then wax the hulls. (The photos below were taken right after we were hauled out. Seas the Day looks much better now.) We could have stayed on the boat, but since we couldn’t let water drain from the sinks and showers while they were painting, we decided to rent an apartment for the week. While it was an unplanned expense, having the following for the past week has been wonderful: long showers, unlimited electricity, air conditioning, cable TV with premium channels, fast free wifi, a bed you can walk around, a washer/dryer, and  a full size refrigerator and stove. 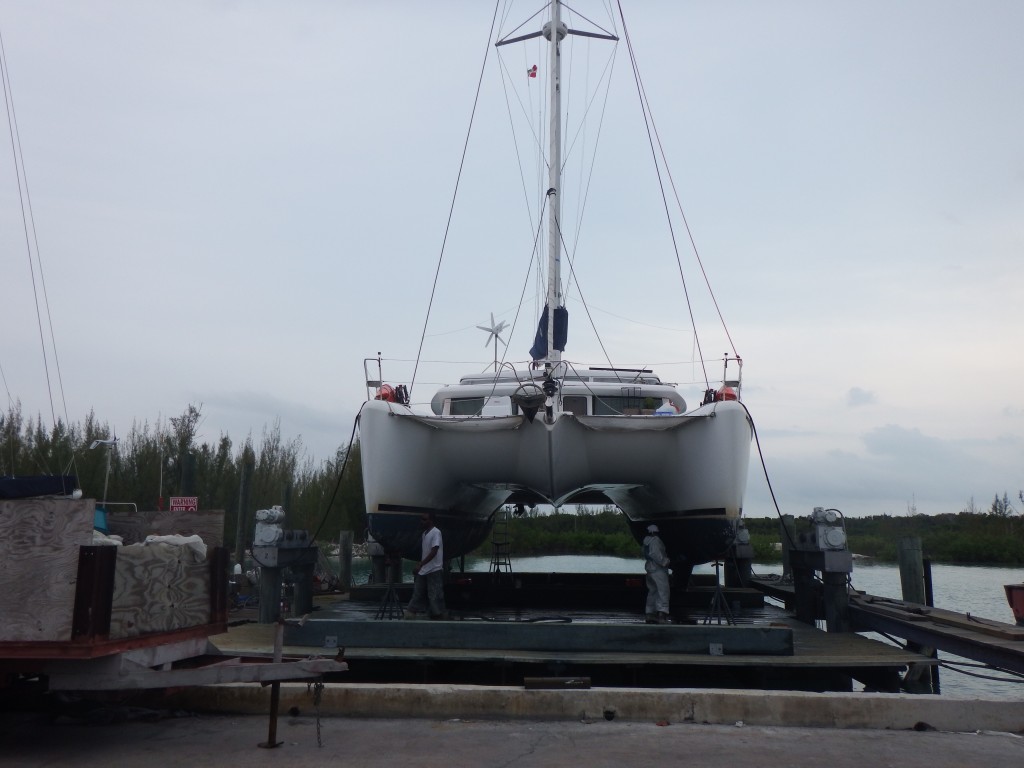 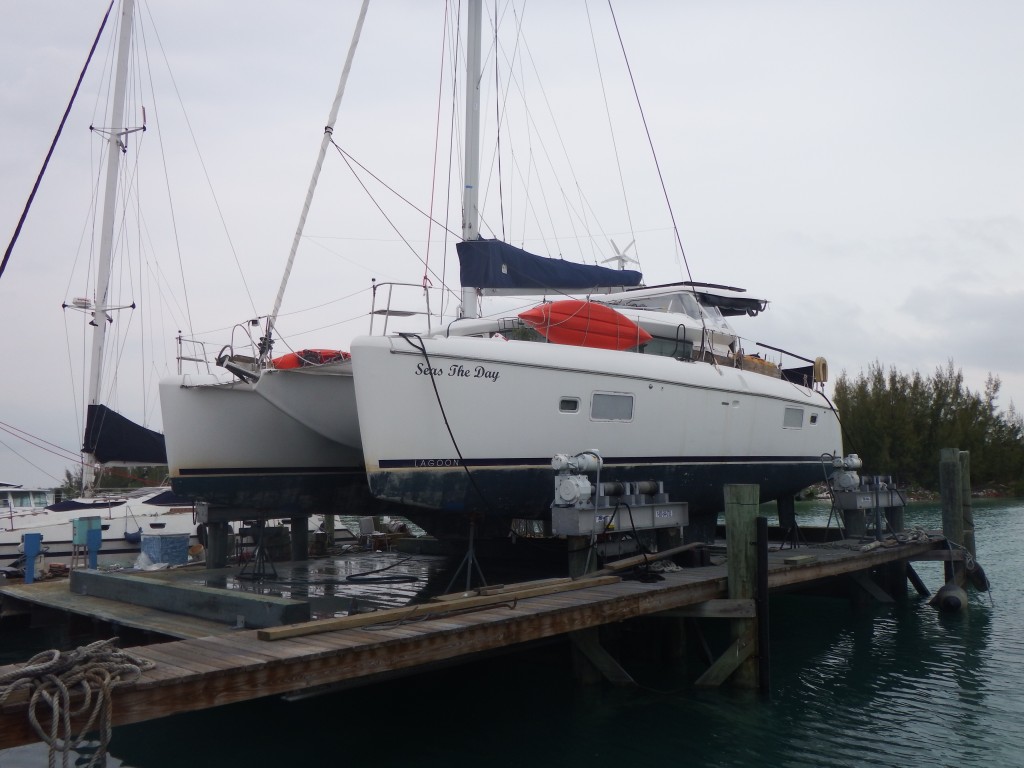 We stayed in a one bedroom apartment on the second floor of the Harbourside Gift Shop.

Although there are a few apartments, cottages, and homes for rent in Spanish Wells, the tourist business is not the most important feature of their economy. They are very industrious, hard workers and their businesses seem to be successful. Unlike other Bahamian islands we have visited, there doesn’t appear to be an unemployment problem here. Everything in Spanish Wells is geared to the residents, not the transients like us. While quite a few cruisers pass through Spanish Wells on their way to or from Abaco, or on their way back to the States, most don’t stay too long. Without a bike or golf cart (which is the main vehicle on the streets) it is a long walk to the grocery store or some of the restaurants and beaches. I recently read a blog where someone said they thought the residents of Spanish Wells were not very friendly. We have found just the opposite. Everyone waves at us when we pass them in our golf cart. In stores or on the streets, they are very friendly and helpful. Two CLODs (Cruisers Living On Dirt) host a happy hour on their front porch every night at 5:00. Anyone can show up and join them. They also have a lending library in their living room. At restaurants, the owners stop by tables to visit customers. (That’s how we discovered the owner of Budda has a large belly, much like Buddha.) Our friend Tom on Interlude left his Crocs on the bottom step of our sugar scoop while visiting. When he was ready to leave, they were gone. We found one floating away, but the other was lost. I went on the VHF radio and asked if anyone saw a brown clog floating in the harbor could they come back to Seas the Day. Immediately we got a reply that one of the water taxis had it and would drop it off on our boat.  The taxi driver told Tom he looked for the other one but couldn’t find it. I could go on and on, but suffice it to say, we think the Spanish Wells residents are very friendly and welcoming.

The citizens of Spanish Wells seem to live comfortable lives, and many are well off, however their homes are simple and nicely maintained. We haven’t seen a single large mansion, but we also haven’t seen any partially completed abandoned houses or tiny shacks found on many other Bahamian islands. Below are a few of some of the lovely homes in Spanish Wells. The majority of them are modest ranch style houses or two story Cape Cods. Looking at real estate listings, however, these houses are not bargains. Simple cottages are $200,000 and up. Ranches start at $300,000. One large home listed with 2700 sq ft and a dock was 1.1 million. A two bedroom, two bath cottage on a 115 ft of beach is $2.2 million. 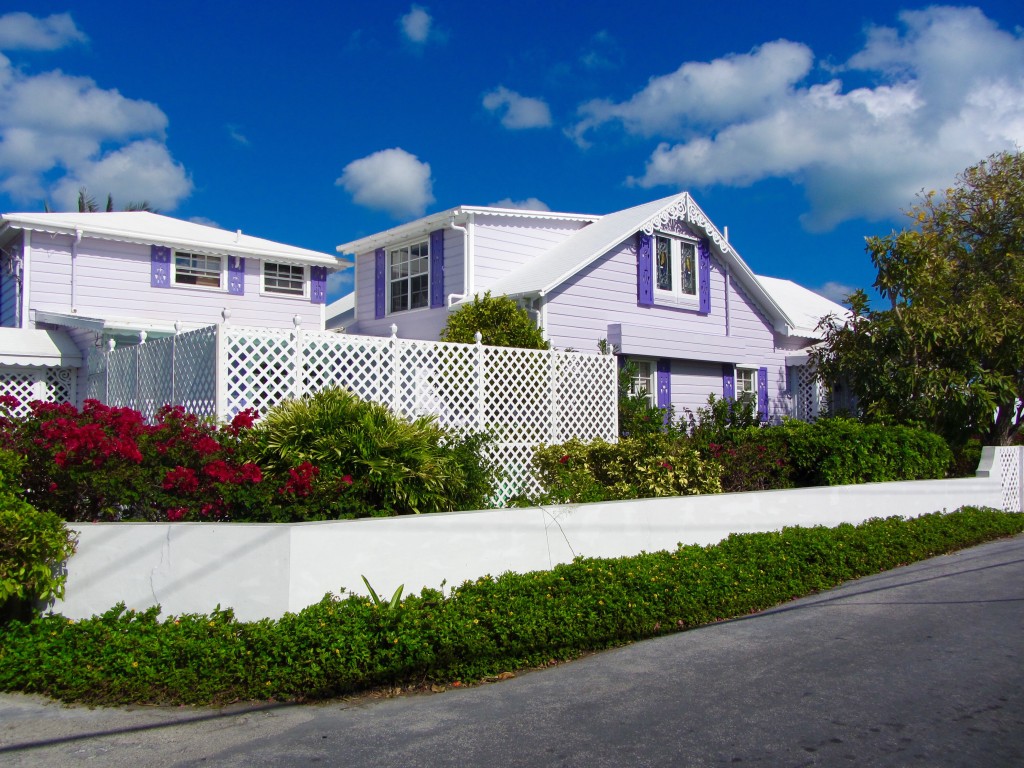 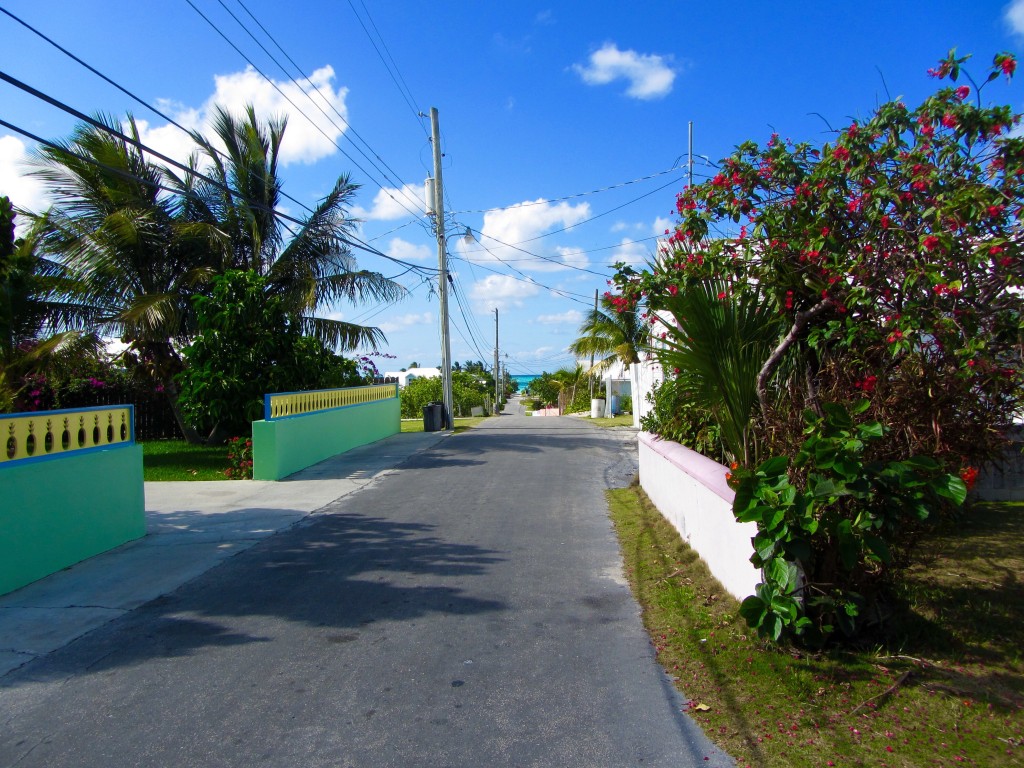 Finally, we have always been very impressed with the lack of crime in the Bahamas. (This does not include large cities like Nassau and Freeport which are dangerous.) A picture can be worth a thousand words, and the photo below is a good example. It was taken on a Saturday night after the local dive shop was closed, not to be reopened until Monday morning. Can you imagine what would happen if stores in most parts of the world left all of these “for sale” items outside for an entire day and two nights? 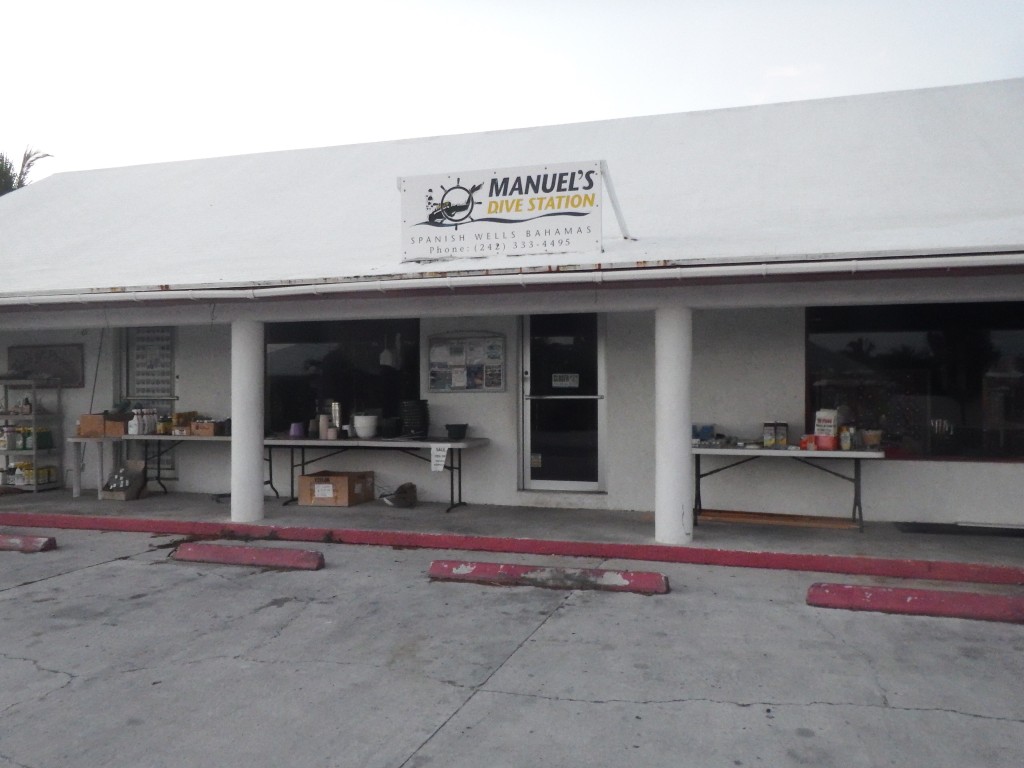 There isn’t exactly a big police force here. In fact, their police car is a golf cart. No high speed chases in Spanish Wells. 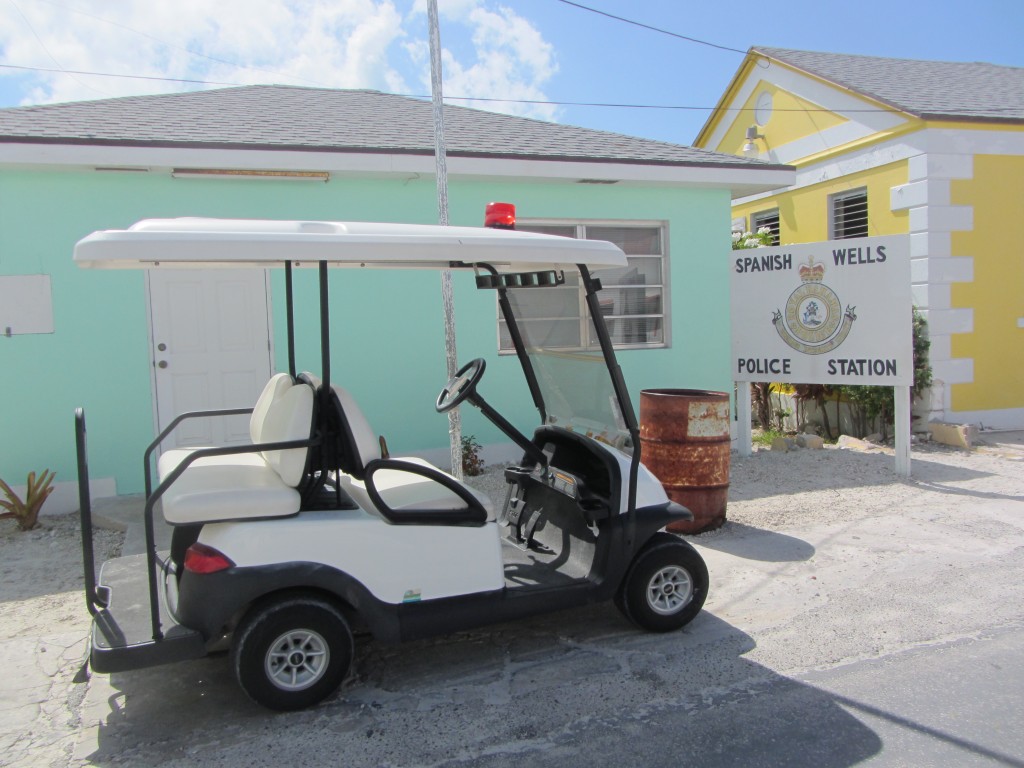 Last year I wrote an extensive description of our visit to Spanish Wells, which can be found here.