We arrived in Spanish Wells on April 5, 2019, and left on June 19. Normally we spend one month in Spanish Wells, but due to having to replace the saildrive, we stayed 1 1/2 months longer than past years. We  are usually sad to leave Spanish Wells because it means the end of another cruise to the Bahamas. This year, however, we were anxious to get back to Florida. The last half of our visit in Spanish Wells was not fun.

We were finally able to leave Spanish Wells and on June 18 we made the short sail to Royal Island. While it’s a nice anchorage to start our cruise back to Florida, we have never found a good place to take Sailor ashore. Not sure why we never saw this small beach before, but Mark was able to take Sailor there. It was small but still a beach. 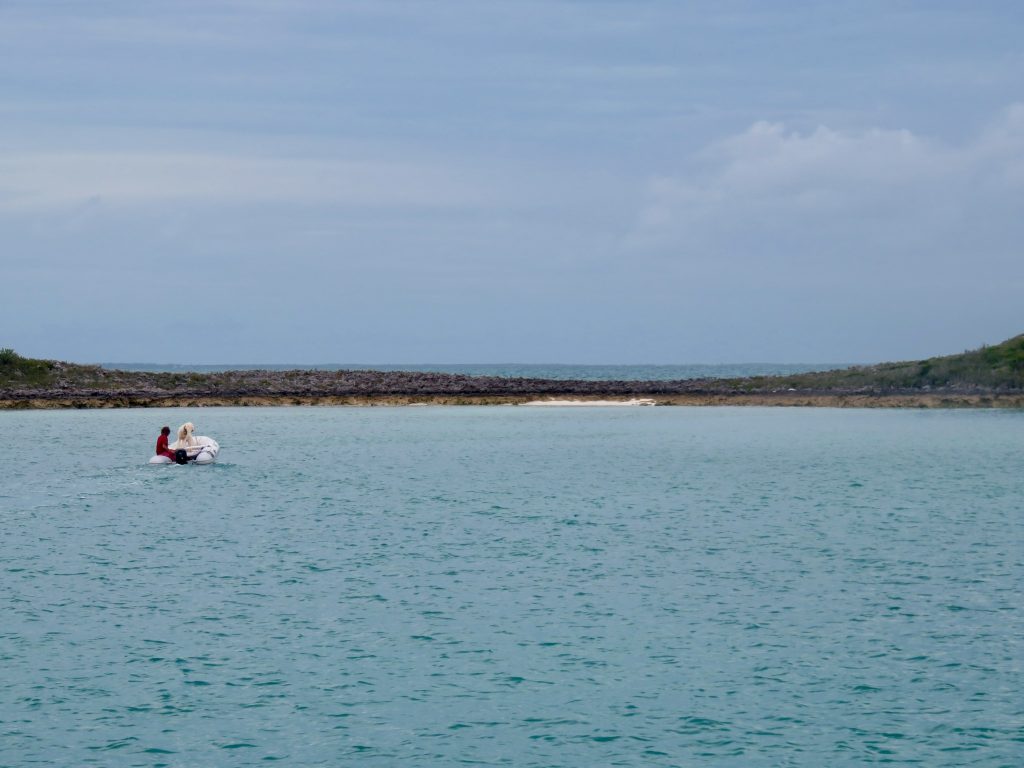 We left from Royal Island on June 19 at 0640 and arrived in Chub Cay at 1430, a distance of 56 nm. Chub Cay is a private island with a very expensive marina. The marina is full of large Sport Fishers since shortly after leaving Chub, you are in deep ocean water where the fishing is great. We can’t take Sailor ashore there, but there is an island right next to Chub where he can legally go ashore after a long day on the boat.

The next morning we left in the dark at 0525 since it was a long sail to our next stop, Bimini. We made excellent time with a perfect beam reach wind, arriving at 1510, and decided to anchor in North Bimini, something we have never done. We have always stopped at Bimini Sands Marina in South Bimini, but their slip fees had gone up to $2.50 a foot (we paid $1 a foot last December) and not worth the cost for one night, especially since the weather was sunny and the sea was calm. We anchored off the east side of North Bimini where there is no development but there were several nice beaches for Sailor. 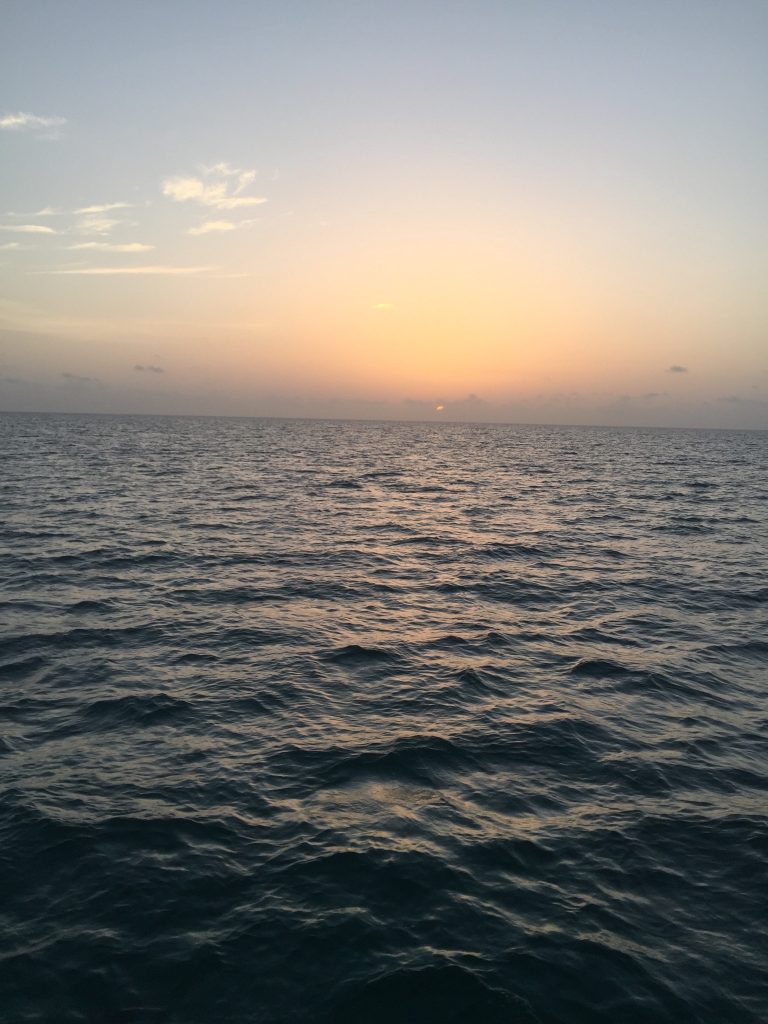 The next leg of our cruise was back to Florida. On 6/21/19 we left North Bimini at 0600 and arrived in Lake Worth at 1435. We got a big boost from the Gulf Stream since we were motorsailing with the current. The seas in the Stream were flat and the wind was NE at 12 kts,  but we were still able to go 9.5 kts while motorsailing. We always motorsail on days when we have a long distance to go in order to arrive in daylight. When Sailor actually doesn’t mind being at the helm while on the ocean, we know it’s a good day and he stayed outside all day. 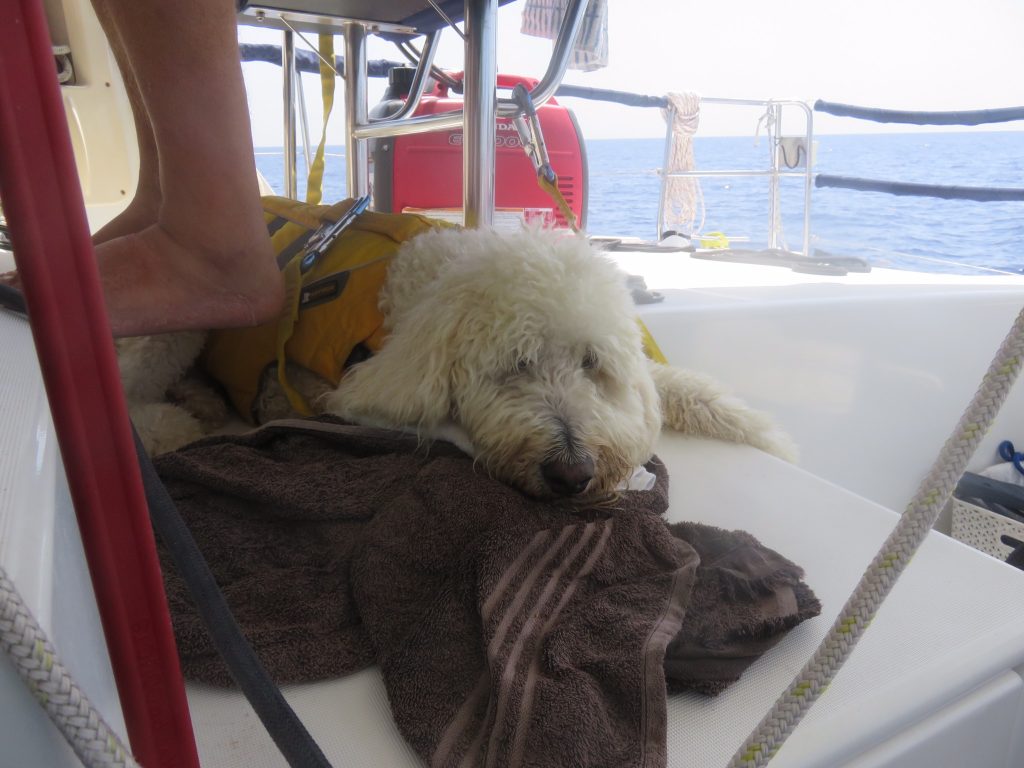 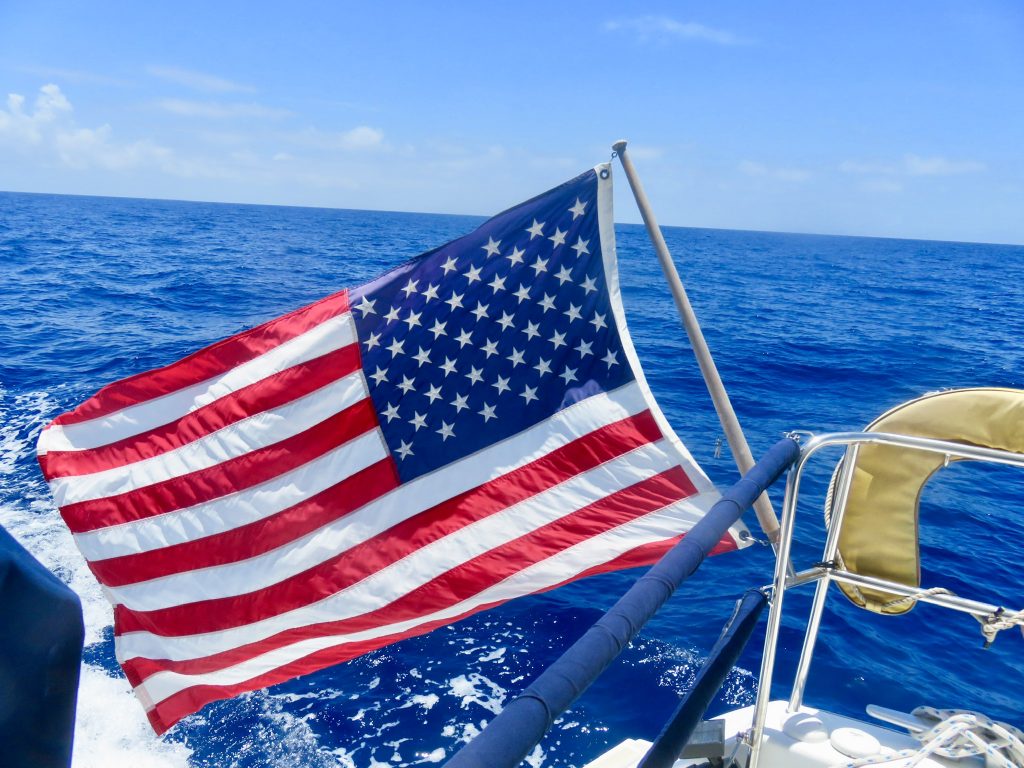 As often happens, after 8 1/2 hours on the calm ocean we knew we were back in Florida as we entered the Lake Worth Inlet and were waked by a local large Sport Fisher, MV True Grit, going full speed behind us and passing us within a few feet. Three or four seconds later he slowed down to a stop to turn north, probably to his marina. Knowing this would happen, since we are used to being waked in Florida inlets, I had already put away everything breakable. Regardless, we were happy to be back in Florida. After anchoring in Lake Worth, we took the dinghy to Peanut Island to walk Sailor. 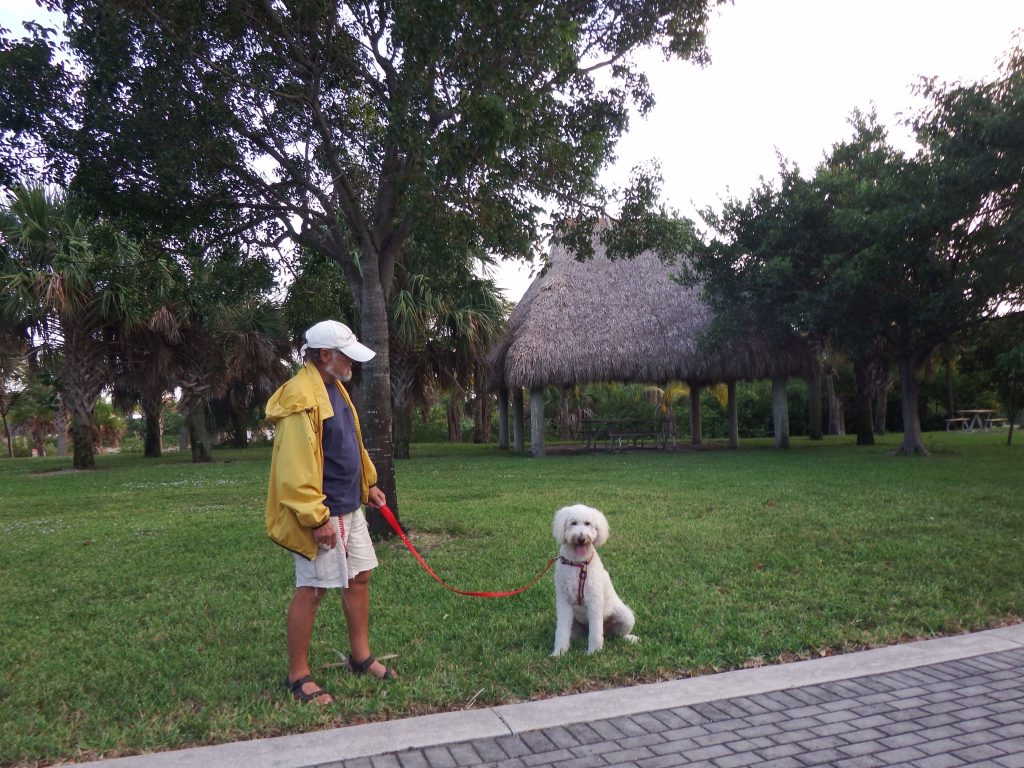 On 6/22/19, the last day of our 2018-2019 cruise, we left at 0640 from Lake Worth and entered the ICW. Many times we have arrived in Florida on Memorial Day Weekend and the boat traffic on the ICW is crazy. We hoped since we were well into summer now it might not be bad on a Saturday in late June. Wishful thinking!

Of course, we were waked by numerous boats going out to fish early in the morning, which we expected, but when we passed a guy paddling in a large kayak right down the middle of the channel we had a new ICW experience. He yelled at us to slow down!!! We are a sailboat motoring at 7.3 kts. I wonder what he said to the speedboat pulling a water skier who came zooming by us a few minutes later or the large Sport Fisher that waked us so bad a few minutes earlier that after the wake hit us the waves pounded the seawalls of the homes on the ICW shore. I wonder if it bothered him when multiple Seadoos zoomed by him. I’m always amazed at the people in kayaks and SUP’s who think they should be right in the middle of the ICW when they obviously don’t need the depth and there is plenty of room for them along the shores. This kayaker, however, took it to a new level claiming we were going too fast for him. As we neared Jupiter, we had to slow down because for some odd reason numerous pontoon boats and small pleasure boats were out in full force going very very slow, motoring side by side, and taking up the whole ICW in front of us. What??? Were they having a parade on the ICW?? Were they going to raft up in one big group and pretend they were a big boat? They were oblivious to us behind them trying to get to the next bridge opening in time. Apparently it was one extreme or the other on a June day on the ICW in SE Florida. 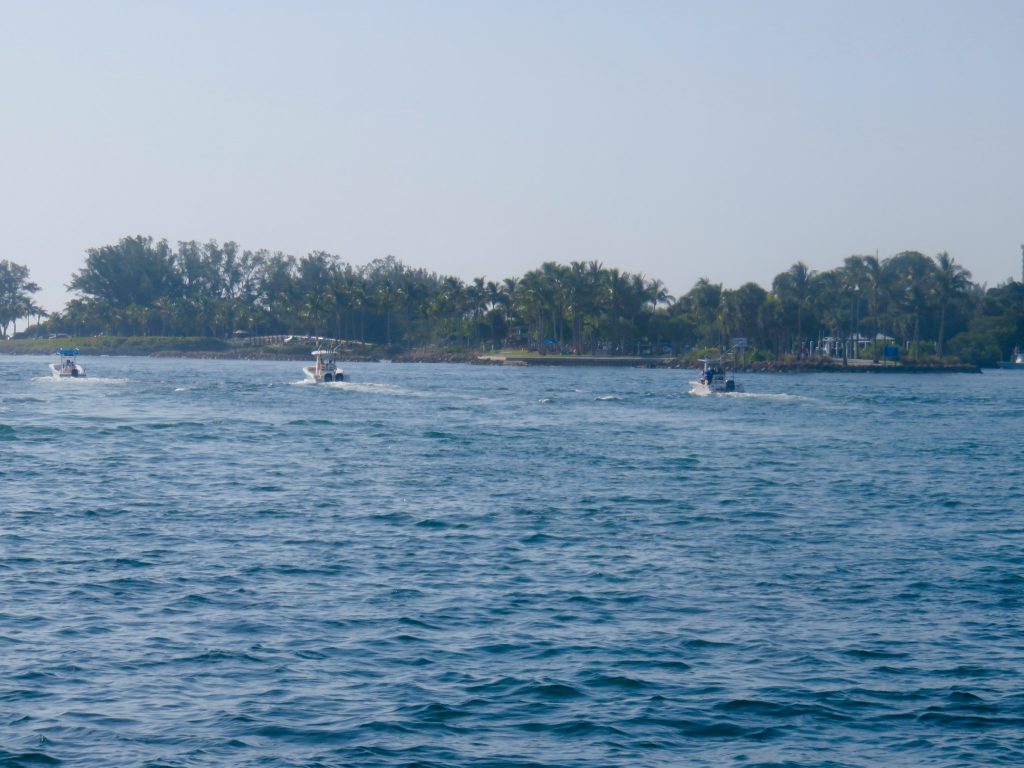 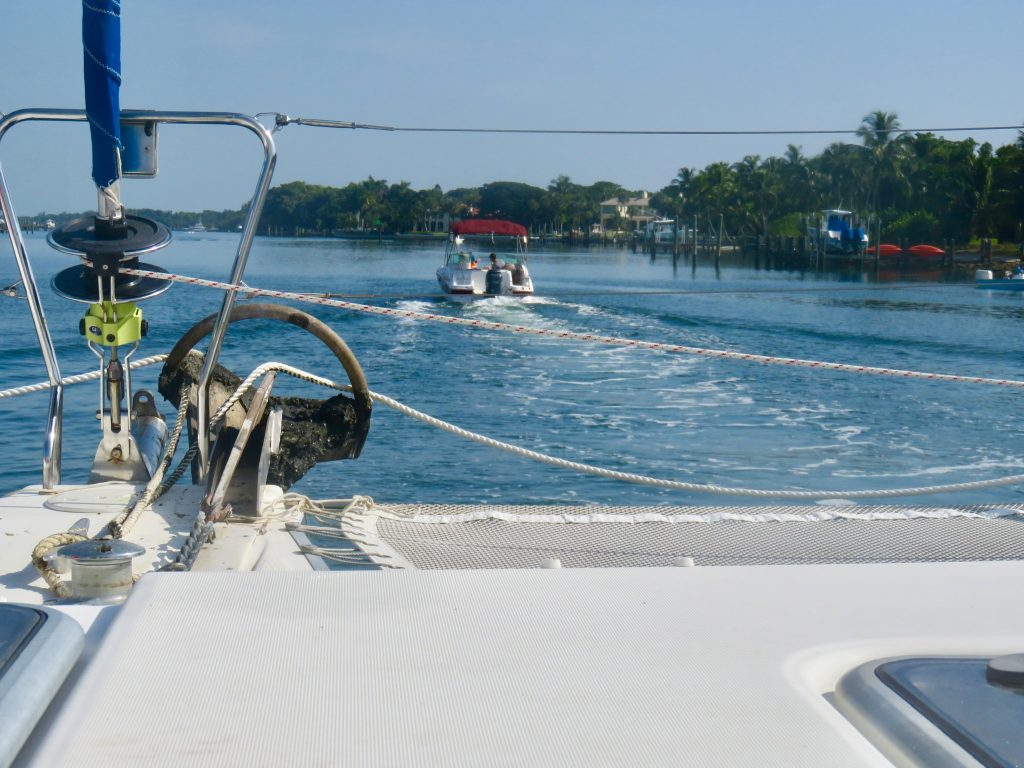 We arrived at our home port, Sunset Bay Marina in Stuart at 1215. You can see from the photo below why it is called Sunset Bay. Thanks to good friend at our marina, Terri on SV Sailbatical, for taking lots of sunset pictures. This one shows us on Dock B. 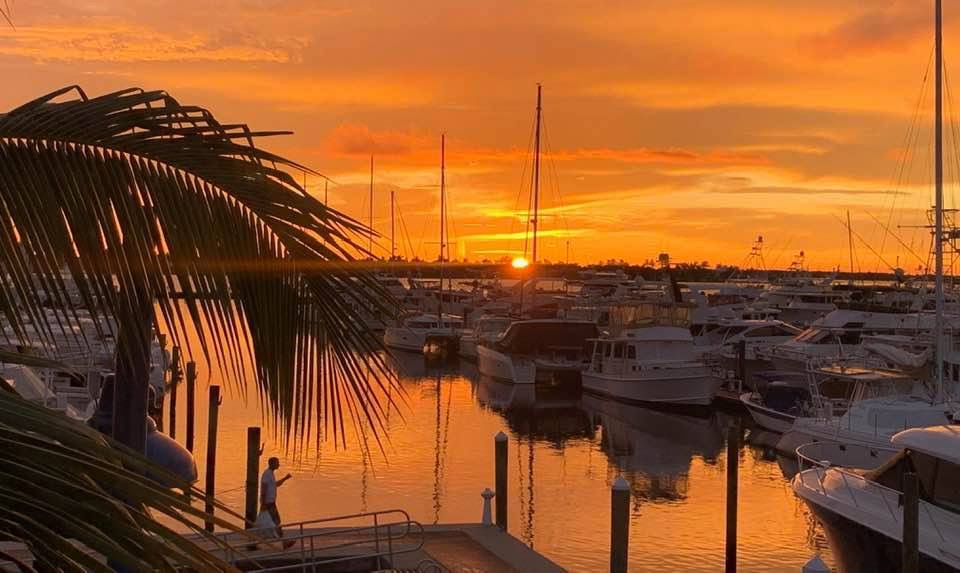 During the previous seven hurricane seasons we have spent at Sunset Bay Marina in Stuart, we have been on the outside of Dock A, tied up on one side and open to the wind and St. Lucie River on the other side. When tropical storms and hurricanes have come through the area, we had to move to Dock B, also only tied up on one side but more protected from the open water and a floating dock, much safer when there are storm surges. There are no slips at this marina wide enough for our 25 ft beam. This year we were allowed to be on Dock B, a much calmer dock since we no longer are banged against the dock by waves when the wind is high and bounce around with wakes from the dinghies racing by to the dinghy dock and boats passing by the marina. We were also able to move quite a bit closer to the parking lot making for a much shorter walk to the car. Dock A is wider, though, with white cool cement on the edges of the recycled plastic dock. Dock B is narrower without the cement on the edges. Since the recycled plastic boards on the dock are very hot, Sailor now wears booties when he walks on Dock B.  Below is a screenshot from our InReach track for our current position on Dock B at Sunset Bay. 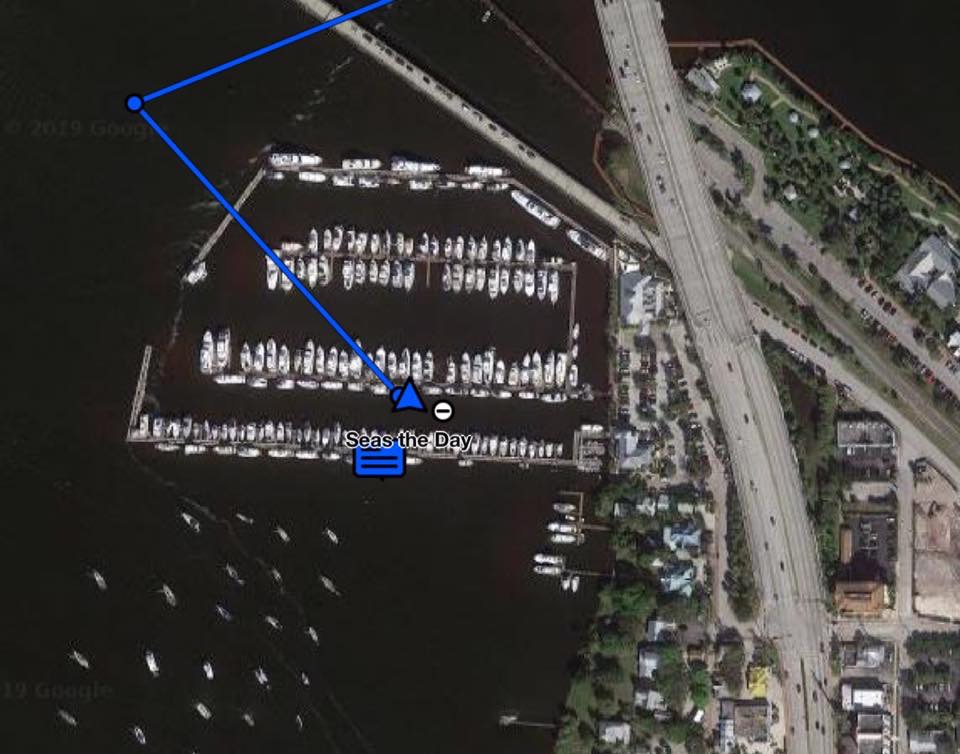 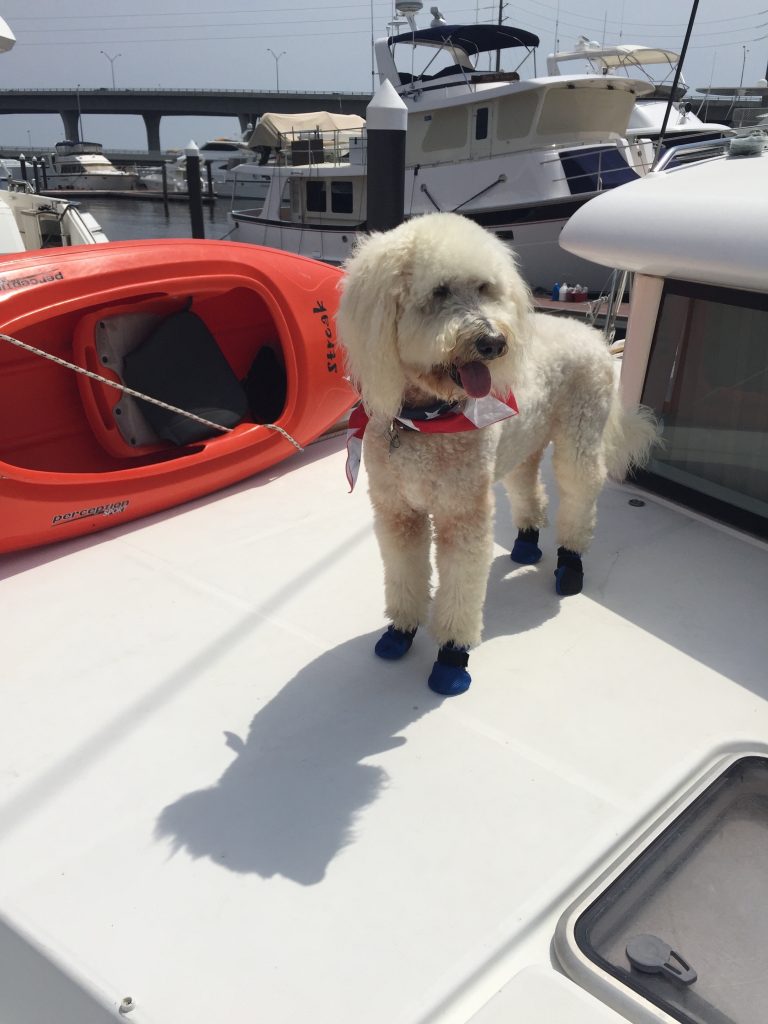 We have made the decision not to go to the Bahamas for the 2019/2020 cruising season. By the time we reached Stuart we realized we were burned out. It was an expensive season, starting out with the replacement of the jib furler when we were in Miami last November. Everything went smoothly from then on until we discovered that we needed to replace the sail drive in April, which was not only expensive but also delayed our return to Florida by over a month. Living on a boat is expensive. They don’t call the money we spend B.O.A.T dollars for nothing. It stands for “Bring Out Another Thousand.” We spent a total of $20,000 in Miami and Spanish Wells for the two repairs.

We have always said when we are through cruising we wouldn’t mind living on this boat at a marina indefinitely. Seas the Day is a very comfortable boat, more or less a floating condo. It remains to be seen if we decide to cruise again or if we might even consider selling the boat to become CLODS (cruisers living on dirt). There is no hurry to make a decision so in the meantime we are happy to be back in Florida, enjoying shore power so we are able to turn on the air conditioning and use unlimited power and water. We also are happy to be able to shop in well stocked grocery stores that don’t depend on a weekly delivery of food via a supply boat. Mark and Sailor miss going to beaches twice a day but love walking to downtown Stuart then sitting on benches there as well as visiting with friends at the marina. I am happy to be back at my yoga studio and water aerobics classes. We moved aboard Seas the Day on August 21, 2008, so we have lived aboard for exactly 11 years. We never thought about how long this would last and at this time we haven’t made any decisions about our future.