On January 8, 2016, we left Bimini for Chub Cay in the Berries at 0520, obviously in the dark, arriving at the Chub Cay anchorage in daylight at 1700. We were going almost directly into the wind and made good time, but it wasn’t a comfortable ride. However, we were on the Mackey Shoals portion of the shallow Great Bahama Bank for most of the trip and the water was beautiful. Chub Cay anchorage is not the best, but OK for one night. It is often rough because large fishing boats race in and out of the channel to the marina, which is right next to the anchorage, causing huge wakes. It is close to deep water, where the fishing boats are headed, and often there are uncomfortable swells. Also, Chub Cay is private so we aren’t allowed to take Sailor ashore. Below was our view while sailing on the Bank. 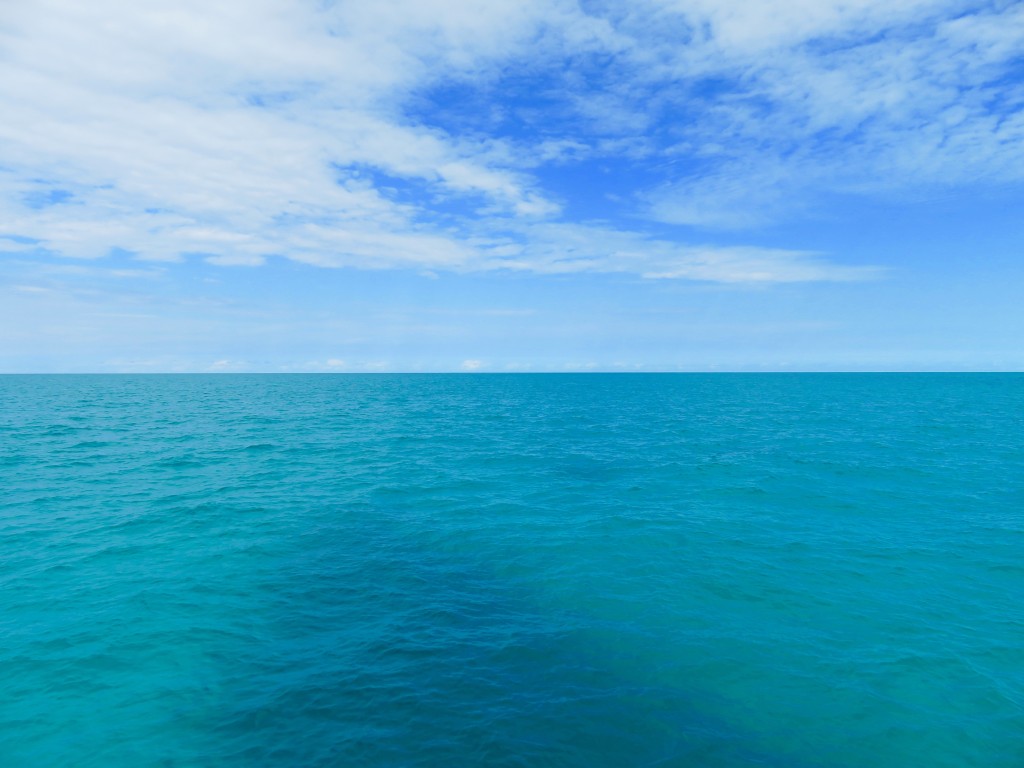 Unfortunately we had to stay a second day in the Berries since the sea and wind conditions were still unfavorable for going on to Nassau. Also the wind was clocking and the conditions were getting worse at Chub Cay. In the morning we moved to nearby Frazier’s Hog Cay and while the first part of the trip around the end of Chub Cay was VERY rough, it smoothed out and we spent a comfortable night at Frazier’s Hog Cay. This will probably be our stop in the Berries from now on instead of Chub Cay. We had a nice time swimming off the beautiful beach and Sailor got lots of exercise chasing his ball. The evening ended with a gorgeous sunset. 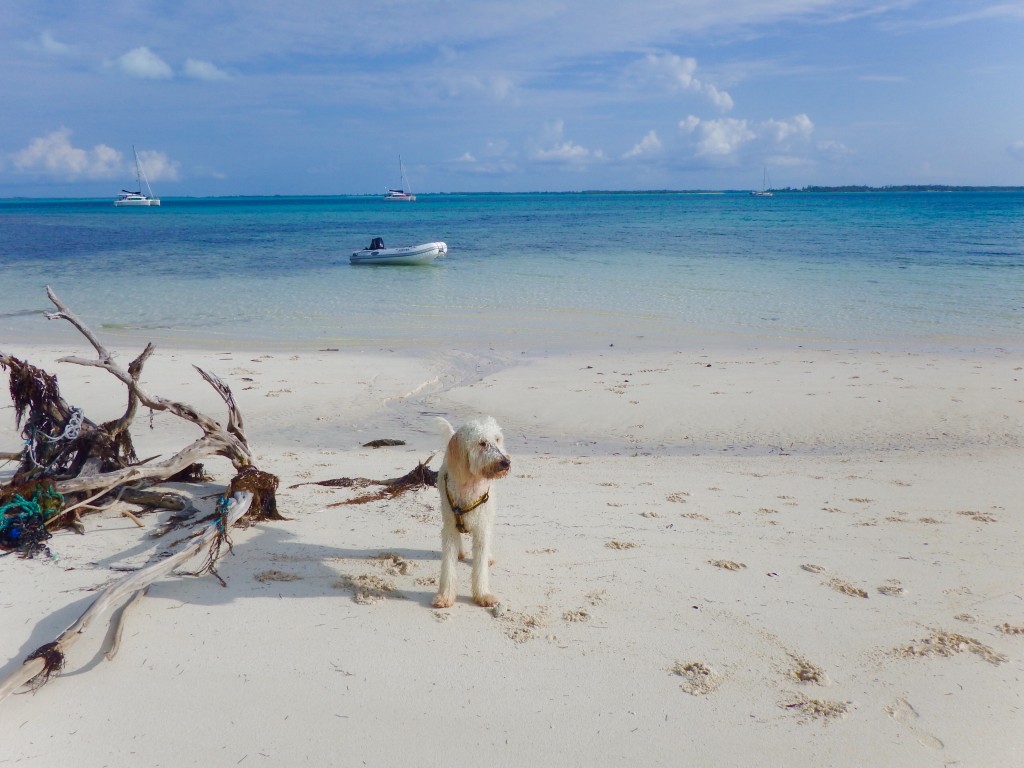 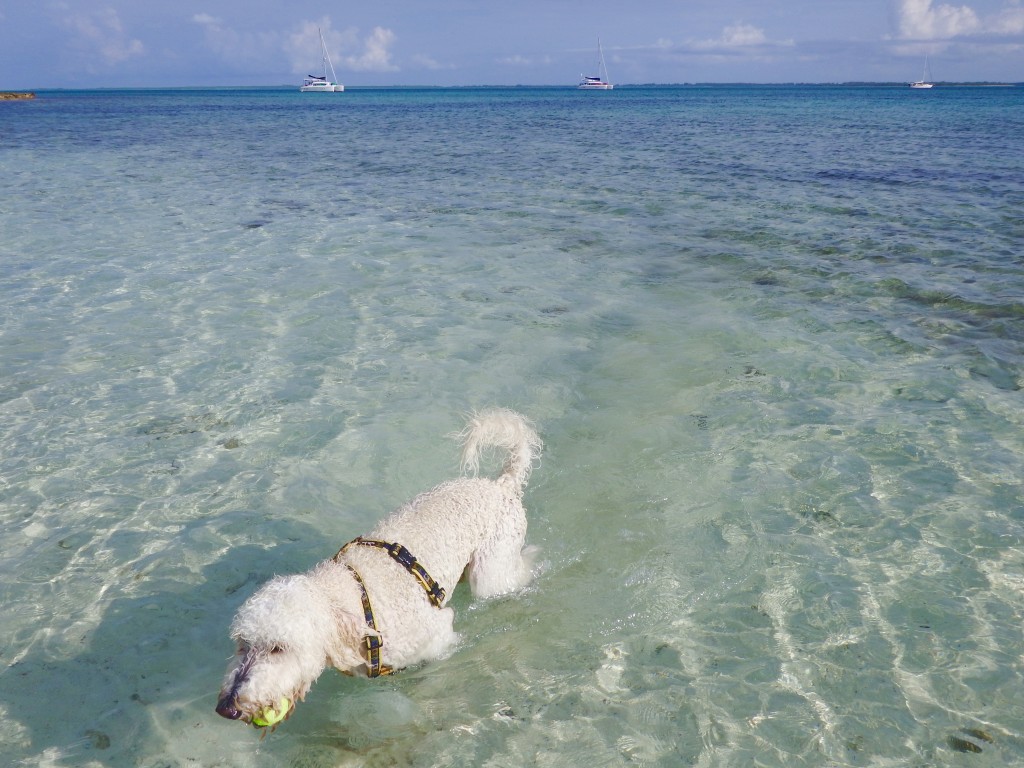 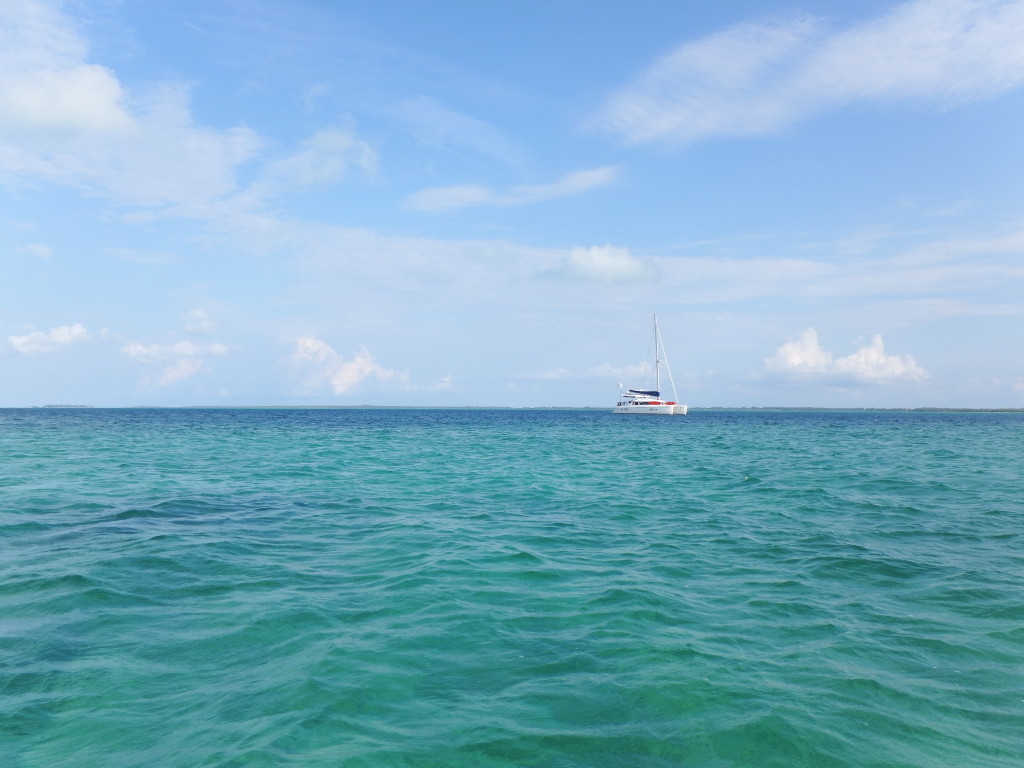 On January 9, we reluctantly left our anchorage in the Berries headed to Nassau. We heard on Chris Parker’s morning report that the seas were 6-8 ft with over 3 ft swells on the beam and we try to only sail in 3 ft seas or less. However the weather this winter in the Bahamas has been very different than usual with constant storms and poor sailing conditions for long periods of time. This was our last sail on deep water until we go out on the Exuma Sound for one day to Georgetown. The winds were also not great at SSE 19-20 kts gusting 22. It was a rough ride, in fact Mark wrote in our cruising log, “Worst sail by choice ever.” Thankfully it wasn’t a long sail, leaving at 0715 and arriving in Nassau at 1230.

We had reservations at Nassau Harbour Club and enjoyed a quiet night in a slip. Of course, we had to have our last frappuccinos at Starbucks and visit the Fresh Market grocery store, both right across the street from our marina. The photo of Starbucks below is taken from the exit of the marina. Two years ago, when Sailor was 7 months old, we stopped at this same marina and Sailor, spooked by fireworks (in February!) jumped off the boat, ran down the dock in the dark, and fell into the water when the dock turned to the right as he kept going straight. Mark showed him the very spot this happened, but not sure if Sailor remembered. 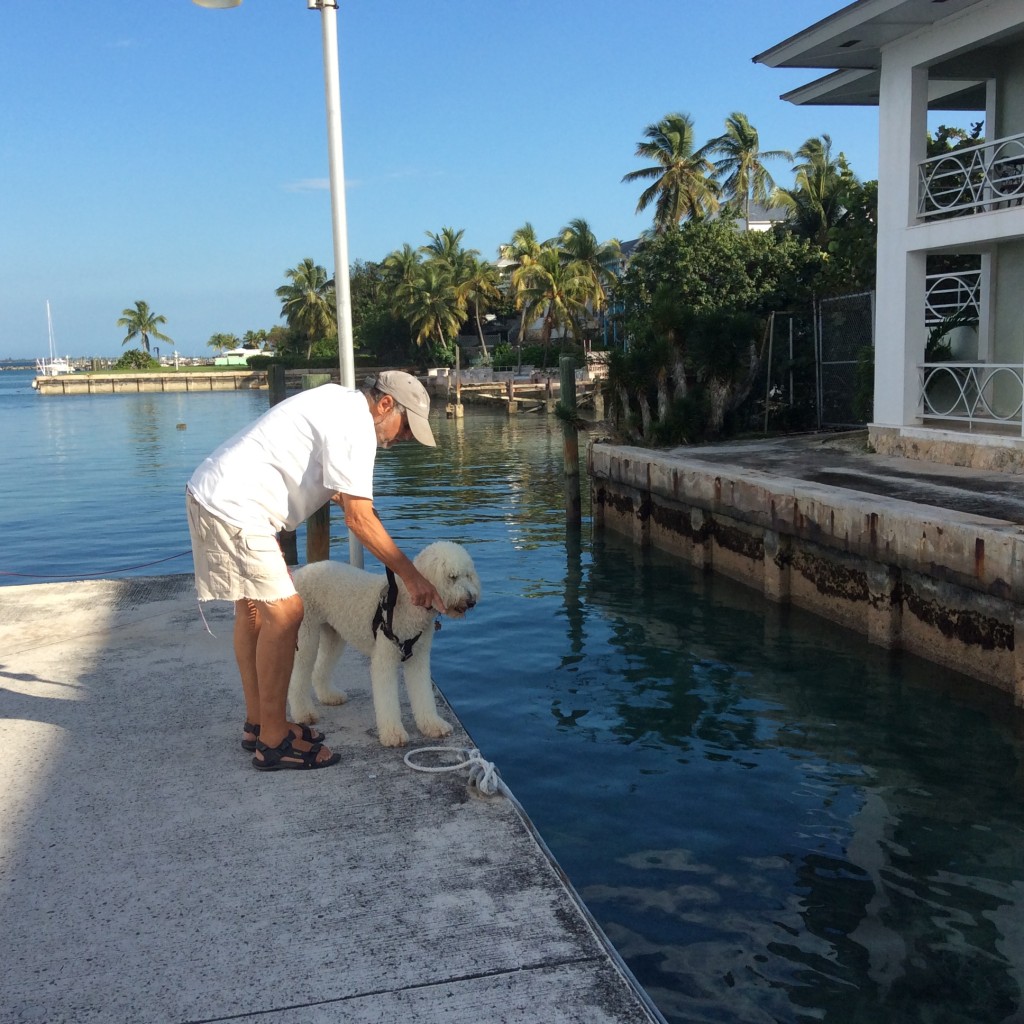 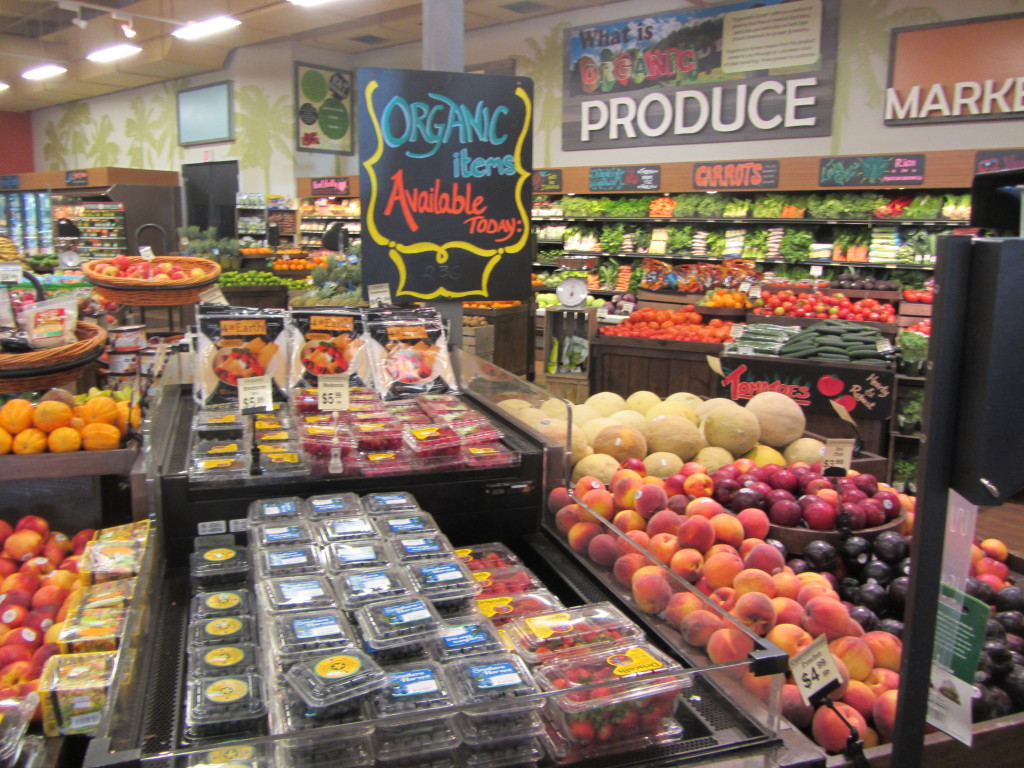 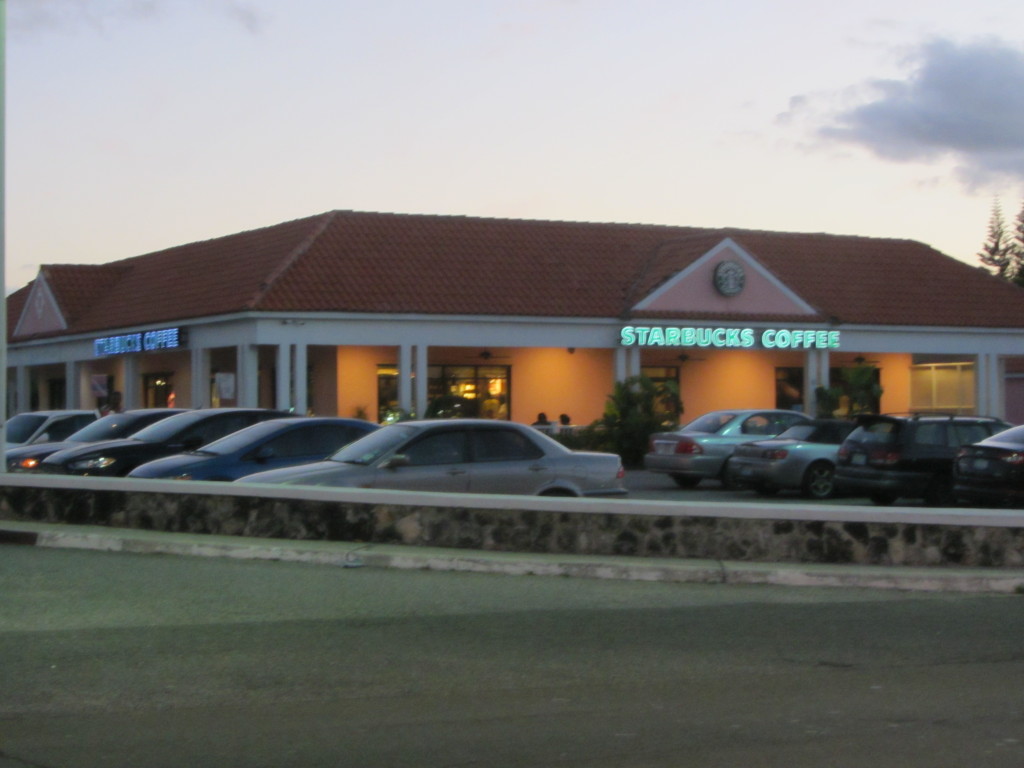 While our sail from Frazier’s Hog Cay to Nassau was rough, other boats had come in after sailing straight from Bimini or the States over a period of several days, and they had horror stories to tell. A boat in a slip across from us had taken on water. The marinas in Nassau were filled with tired cruisers. We were glad we waited the extra day to leave the Berries even if we still had an uncomfortable sail.

We try to never stay longer than one day in Nassau. It is not a safe city, and other than crossing the street from the marina to the strip mall, we don’t have anything else we want to see or do there. Boats have even been boarded by thieves at several of the Nassau marinas and it is dangerous to be out on the streets after dark. Paradise Island, where most tourists go, is across a bridge and probably safer. Nassau is on New Providence Island and is where the cruise ships stop. Our boat buddies since Miami on Renaissance II, another Lagoon 420,  decided to stay in Nassau since they had never been there and we left the next morning for Norman’s Cay, our first stop in The Exumas.

On January 11, we left the last marina we would stay at until we return to Sunset Bay in Stuart, Florida, at the end of May. The route to The Exumas is across the Yellow Bank portion of the Great Bahama Bank. We had a great wind angle for sailing although on a long day we always use the engines and sails and at one point were motorsailing at 8.3 kts. We left Nassau at 0900 and arrived at Norman’s Cay at 1445. It was almost full when we entered the anchorage because strong winds were forecast for that night. We anchored southwest of the sunken plane and several boats came in after us but left, probably going south to the next anchorage or mooring balls at Shroud Cay. During the night we had high winds and rain while turning 360 degrees with the strong current.

After listening to Chris Parker’s report the next morning, we decided the weather was settled enough to head south to Big Majors/Staniel Cay. This meant we were going past the entire Exuma Land and Sea Park, something we would never do if we weren’t planning to return on our way north in April. The park has the best hiking, kayaking, beaches, and snorkeling in the Exumas. Our goal was to get to our mooring ball in Georgetown as quickly as we could safely move. Friends who were already there told us the balls were being taken quickly, perhaps in part due to the 100+ kt storm they had while we were safe at a marina in Bimini.  We left Norman’s Cay at 0740 and dropped the anchor at Big Majors at 1230. We made very good time, outrunning a squall coming from the ENE as we left Norman’s Cay followed by a sunny day. Big Majors is a large, excellent anchorage, unless the wind is from the west. We will be returning here in mid-April to pick up good friends Carolyn and Ed (S/V Sharkitecture) so we didn’t mind missing snorkeling at Thunderball Grotto. We did go ashore for a walk and Sailor got to visit the nurse sharks who hang out at the marina waiting for someone to drop discards from the fish cleaning station. Of course we had to bring him to see the famous swimming pigs also. 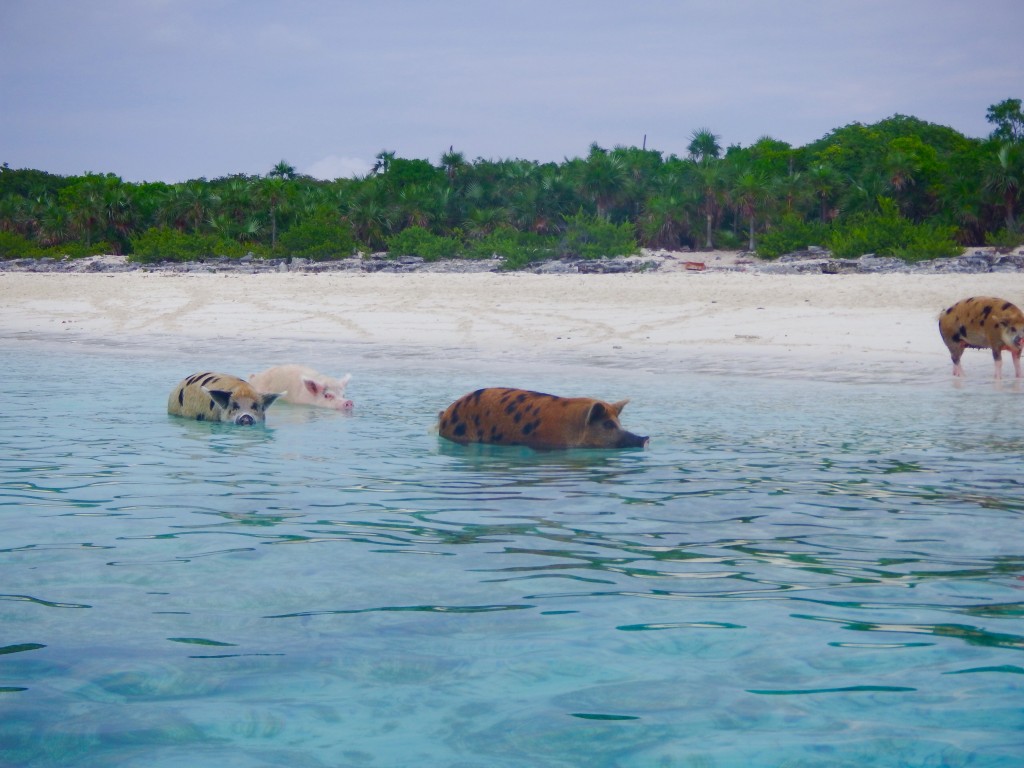 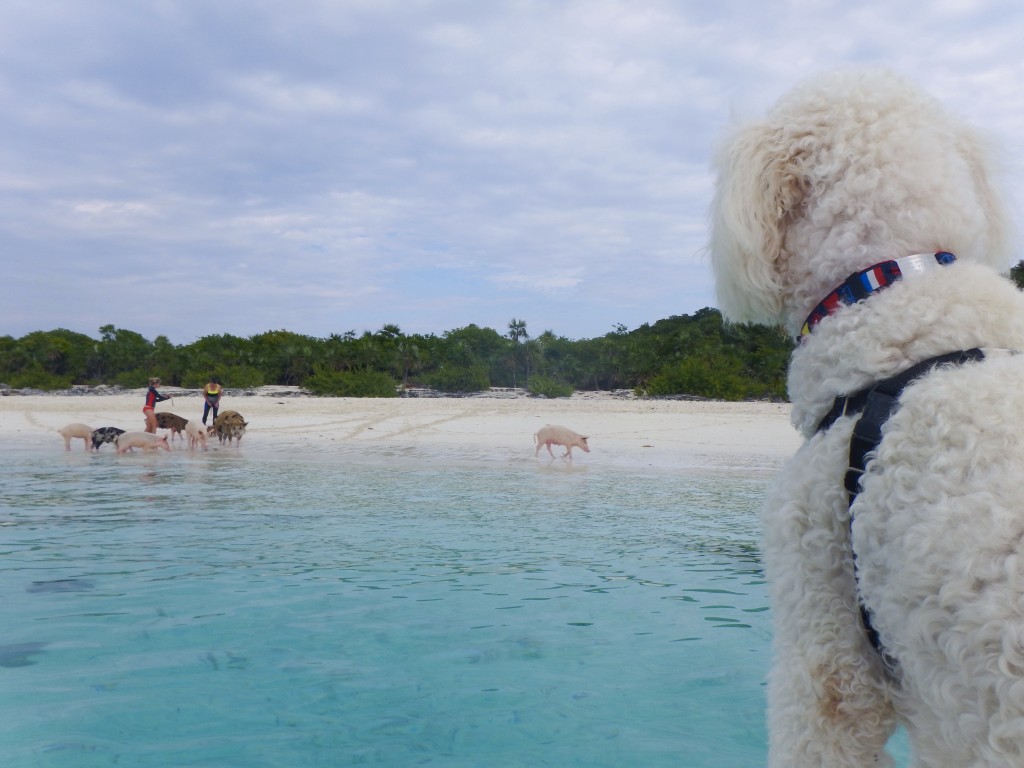 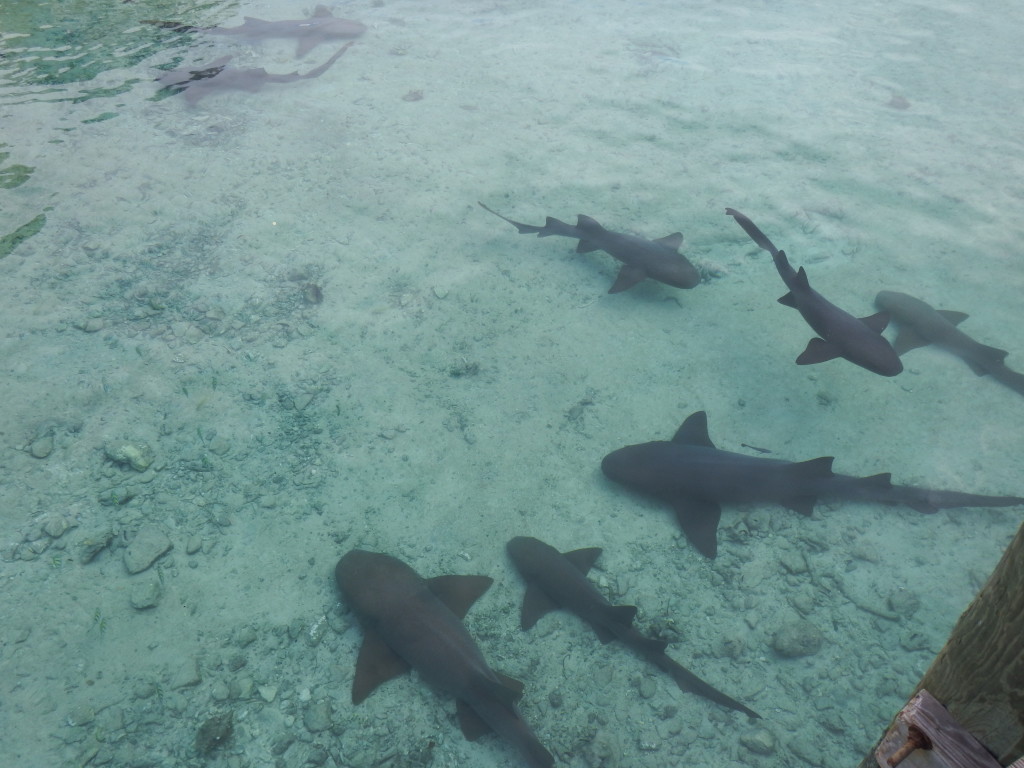 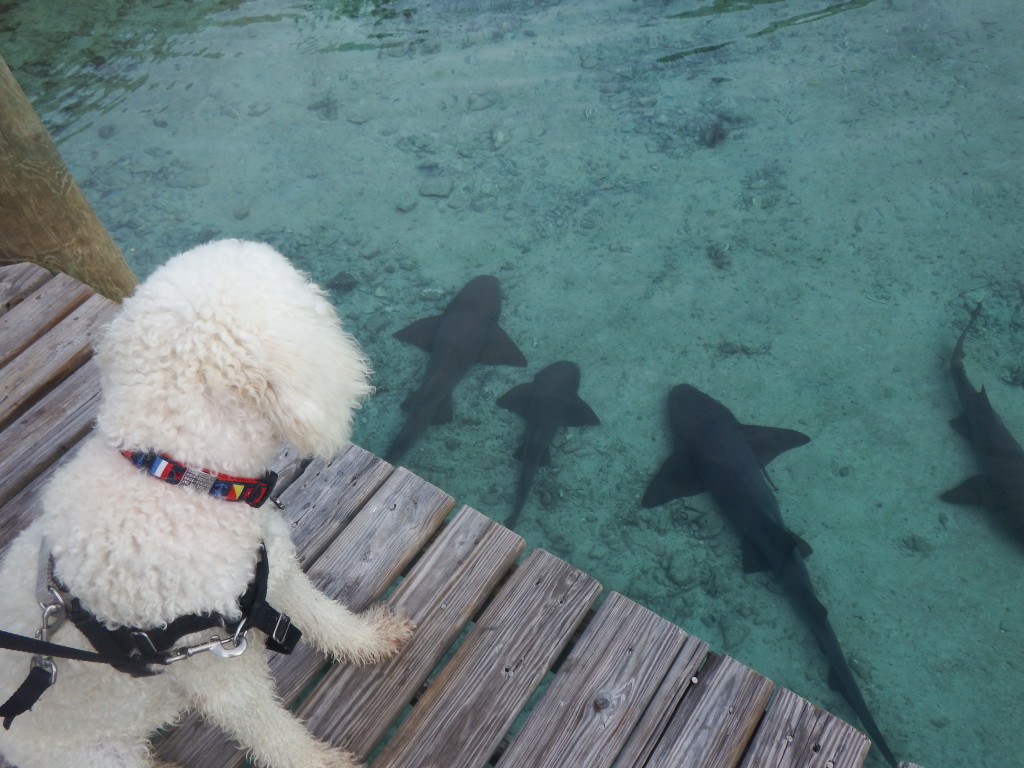 The next morning we made the short trip to Cave Cay, where we planned to exit the cut to go out on Exuma Sound to Georgetown. We knew we would have several days to wait for calm seas and favorable wind. We left Big Majors on January 13 at 0825 and arrived at 1130, the only boat in the anchorage outside Cave Cay Marina. It was a very pleasant sail and after dropping the anchor, Sailor and Mark headed to a beautiful beach near our boat. The shore has some interesting caves and there are many more on the cay, thus the name “Cave Cay.” Mark and Sailor also took the dinghy into the very protected marina at Cave Cay. He reported that it is a hurricane hole marina with excellent docks, but it seems to only get boats in its slips during very bad weather. During the several days we were in the anchorage, two boats joined the one that was already there. 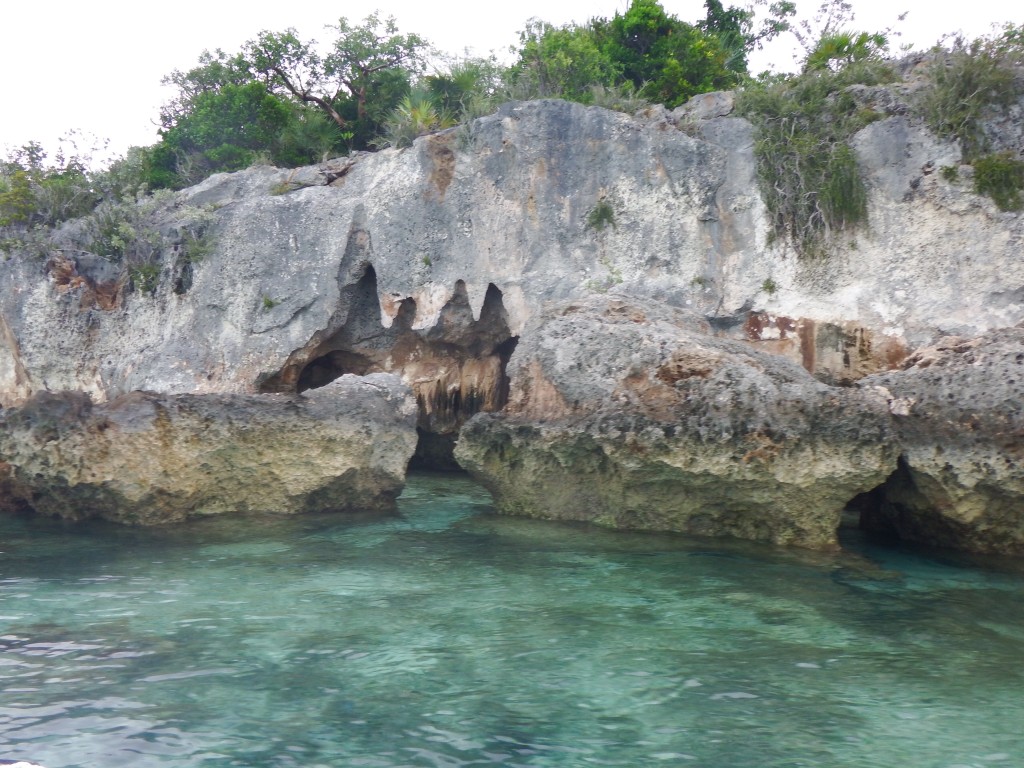 Houses and caves were next to the beach where Sailor played. 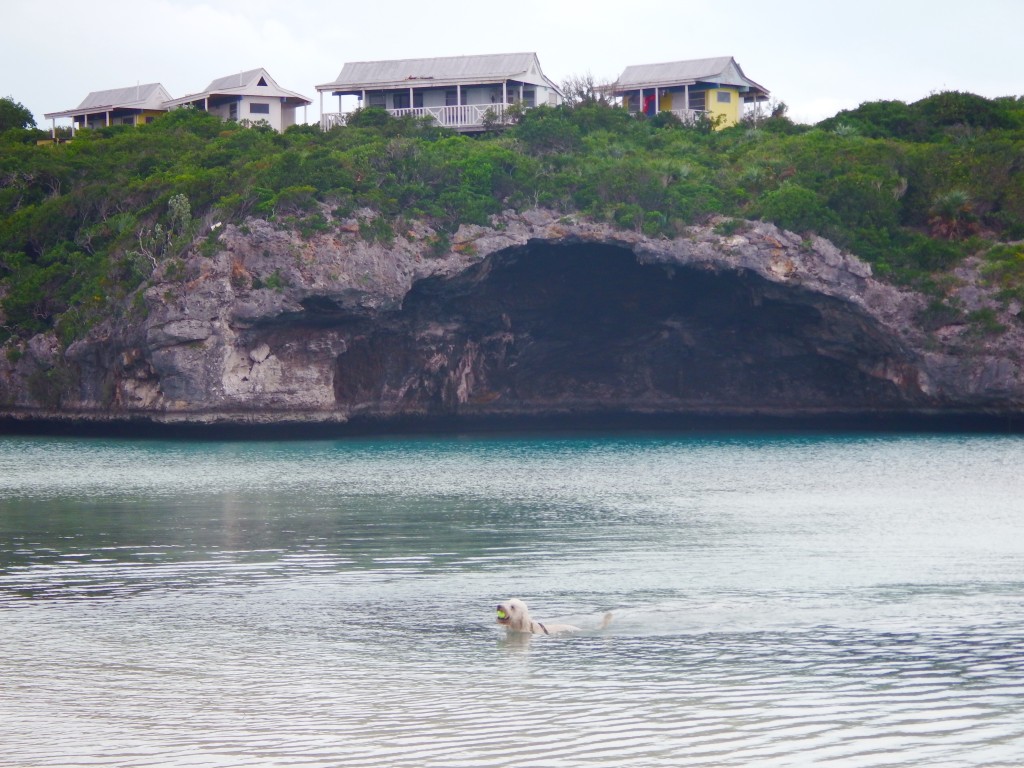 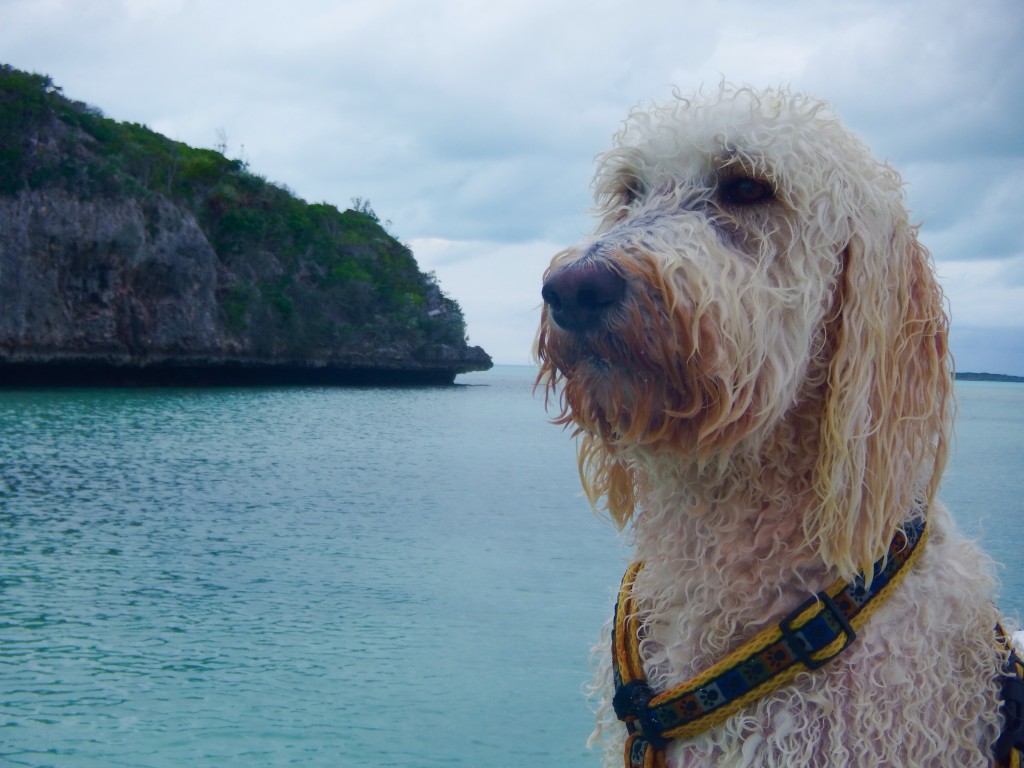 Sailor checked out the marina at Cave Cay. 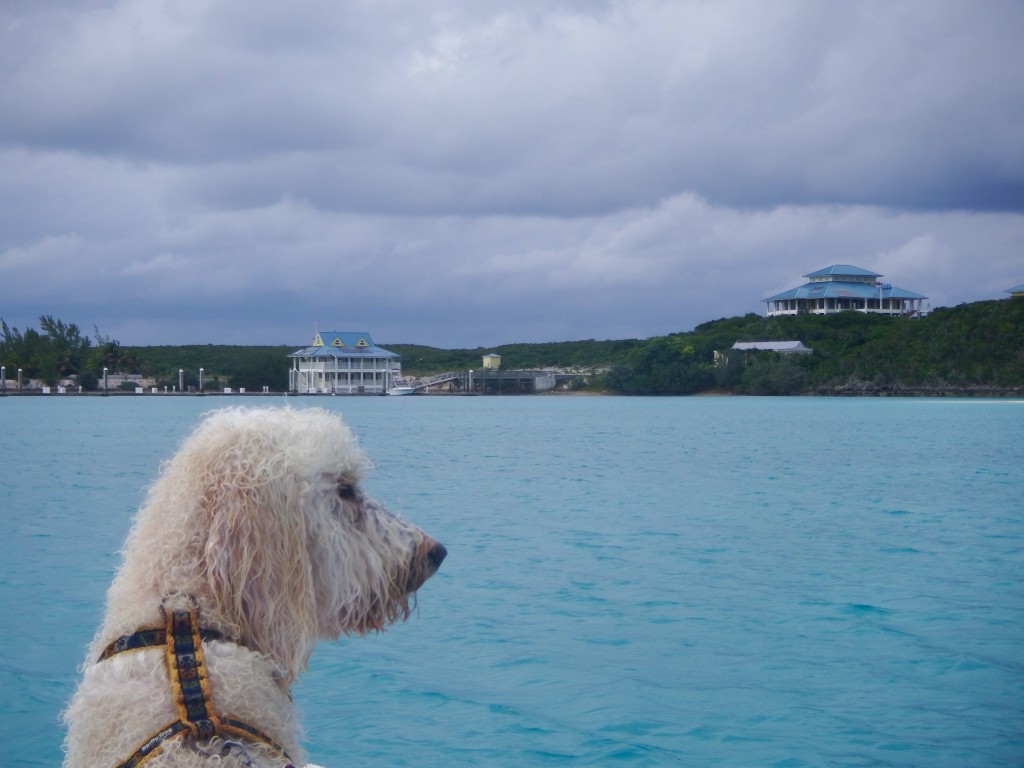 We spent three nights at Cave Cay waiting for the Exuma Sound sea state to calm down. On the first morning we had a BIG surprise. We got up at 0630 to listen to the Chris Parker marine weather report and saw a 160 ft long tanker named Tropic Breeze headed right towards us. (We have AIS and checked the info about the tanker.)  We saw her anchored on the deeper south side of Cave Cay Cut the night before and early that morning she was coming to our shallow anchorage.  Tropic Breeze motored straight for our starboard side, then turned and went a few feet off our aft, turning again passing us on our port side. A short distance past us, her anchor dropped. Next, we saw a small boat with a diver in it next to the tanker. The diver brought a large fuel hose from the tanker to the shore and for several hours fuel was pumped into the Cave Cay tanks. We weren’t worried about the “close call” because we have seen these Bahamian ships often and their captains are very good at maneuvering in tight spaces. The reason the ship went around us was to get downwind so they wouldn’t be blown into us. However, we were surprised that this was a marked anchorage on the Explorer Charts but there was no indication that tankers would come here to transfer fuel to the cay. We have anchored here before but this was our first close encounter with a big ship. 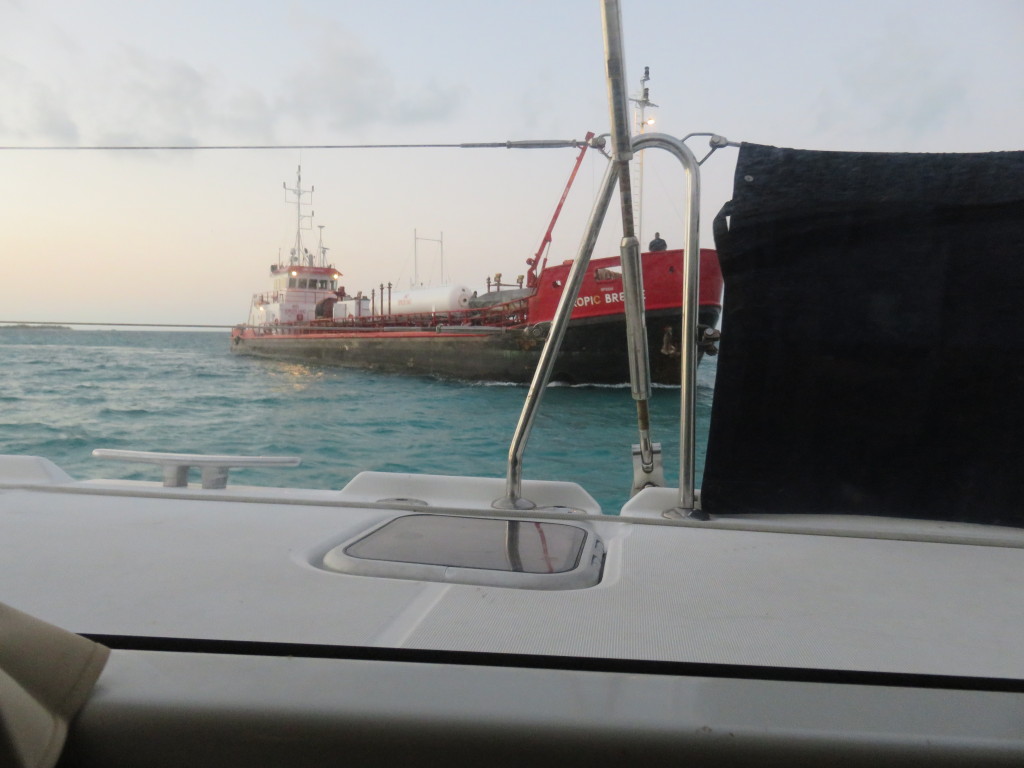 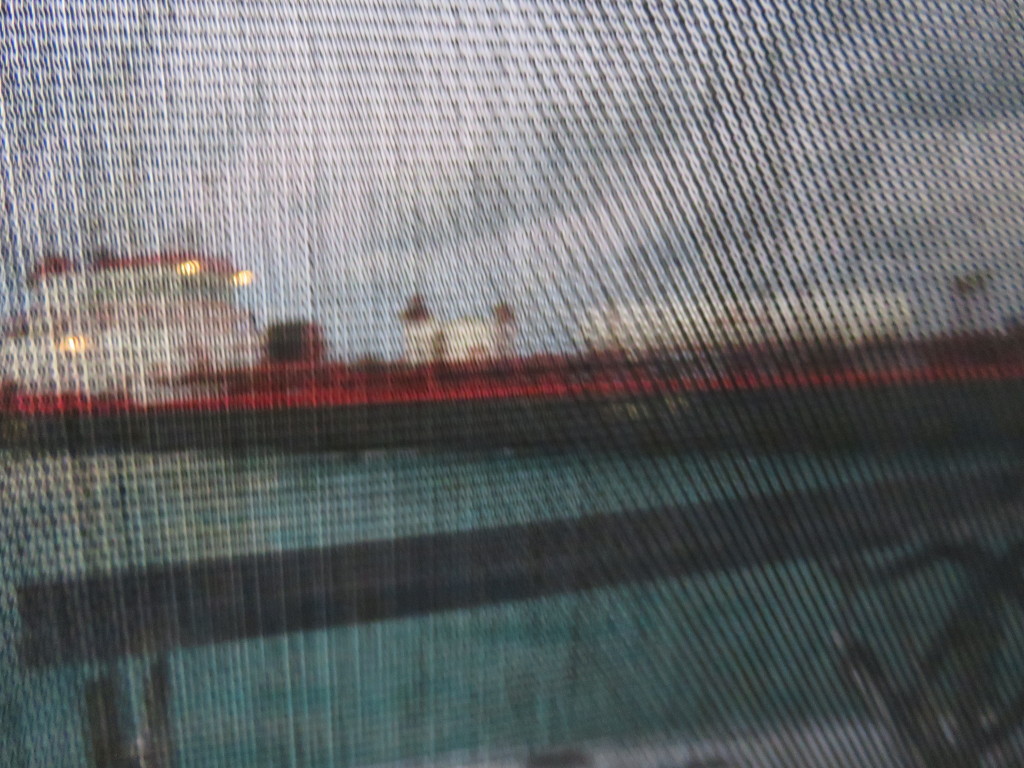 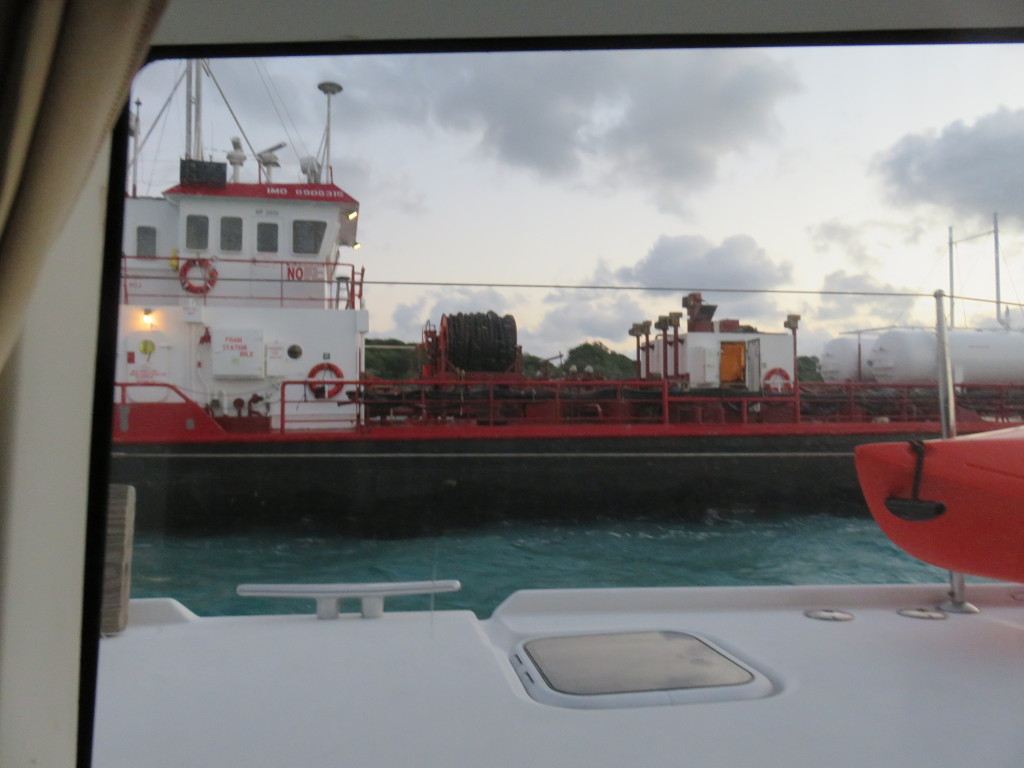 The fuel hose is visible floating in the water in front of the small boat. 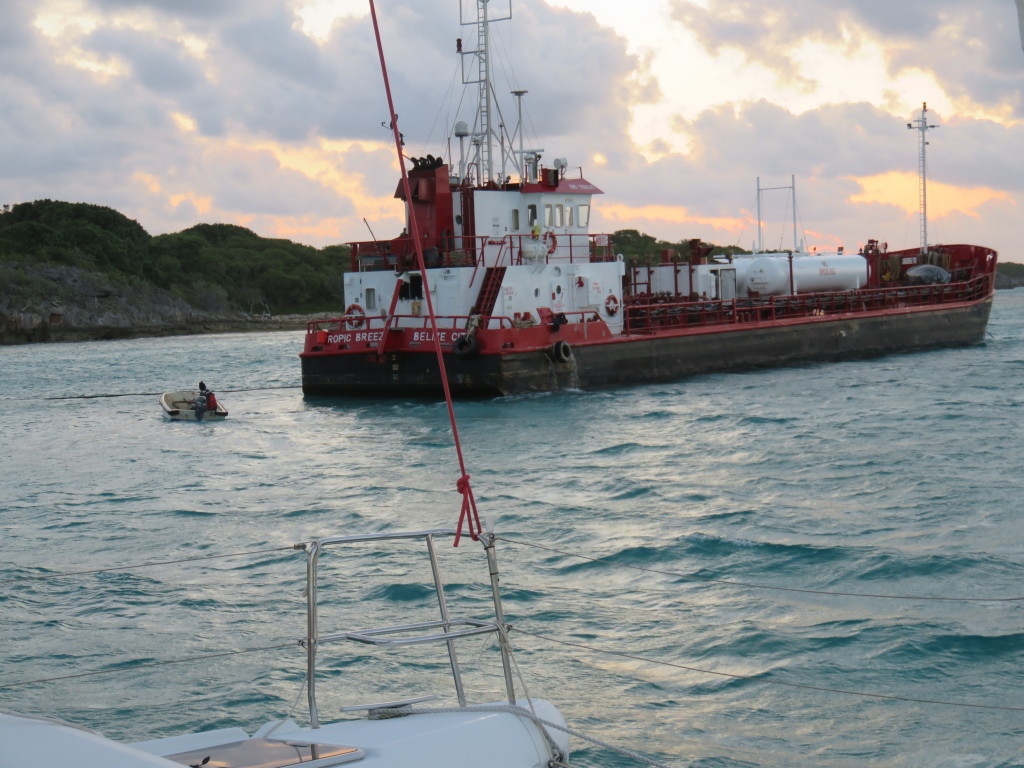 Sailor seems to be a bit amazed at what he just saw. 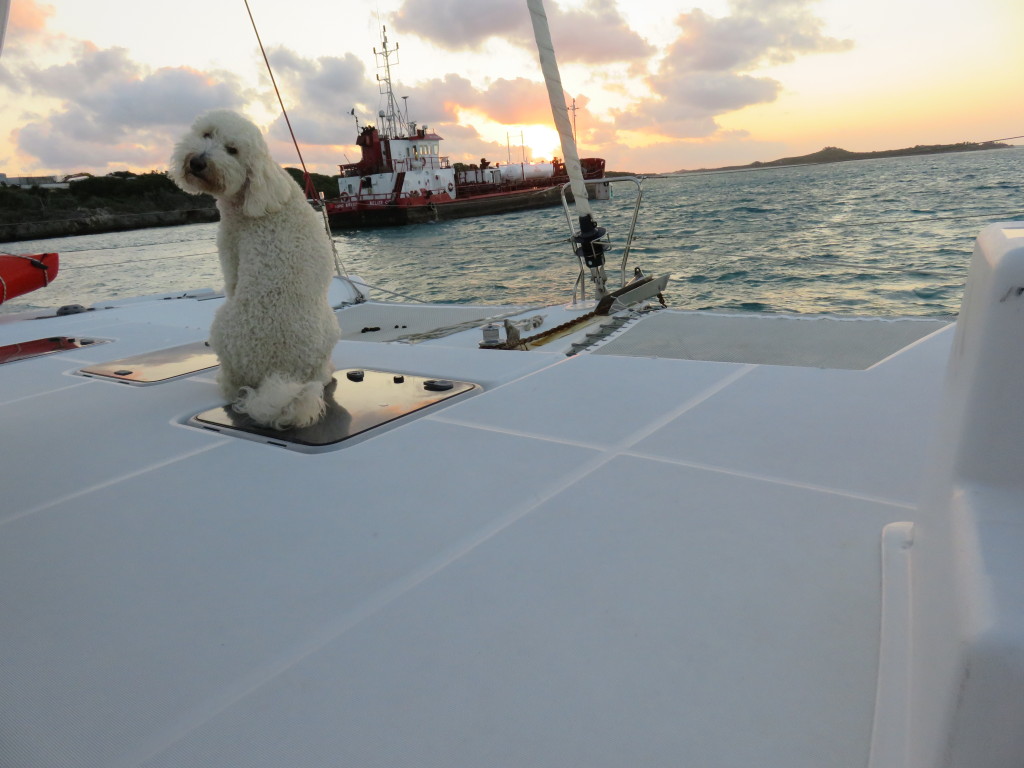 For the next two days, all was quiet in our anchorage, mainly because we were the only boat there, and by January 16 the sky was clear, seas were 2-3 ft, and winds were from the southwest at 8-12 kts. It was time for the last leg of our journey to Georgetown. Even Sailor stayed out in the cockpit all day, which he only does when it is very calm. Otherwise he insists I get in one of the beds with him where he feels safe. We left at 0730 and were on our mooring ball in Hole 2 at Stocking Island, across the harbour from Georgetown, by 1230. There were only two balls left in Hole 2 and a few days after we arrived the last one was taken. We were very happy to reach our destination for the next few months and are looking forward to our stay here until the end of March.

This was our view of Exuma Sound on our way south to Georgetown. It is rarely this flat so it was well worth the wait. 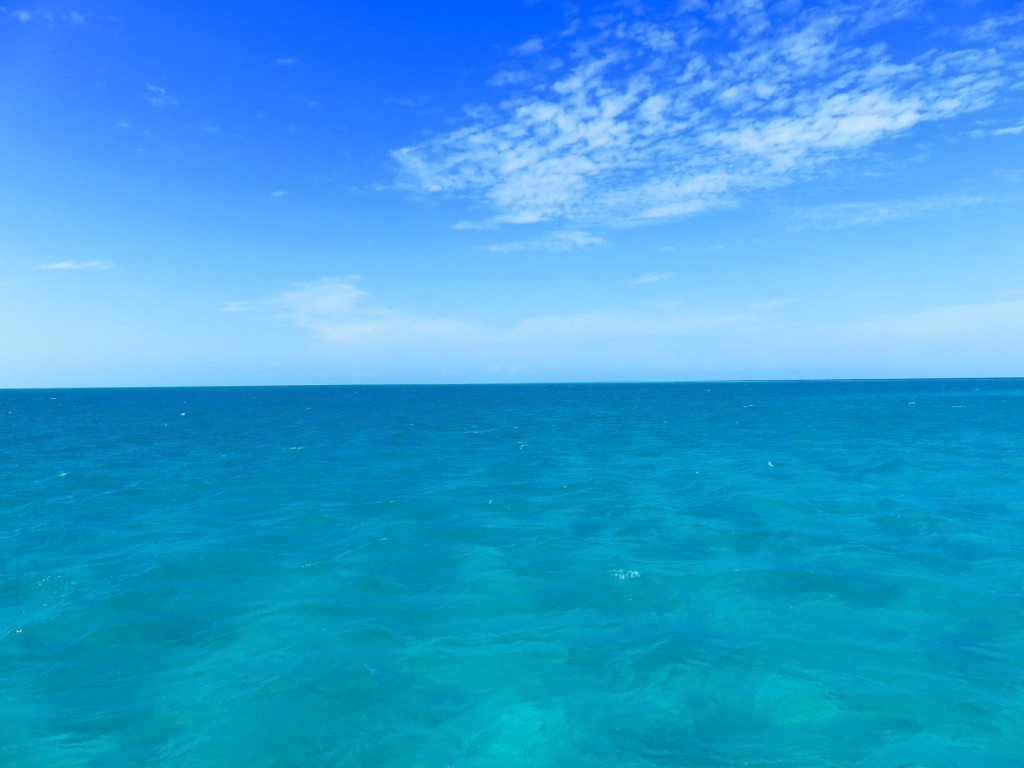 Sailor was in this position all day long. 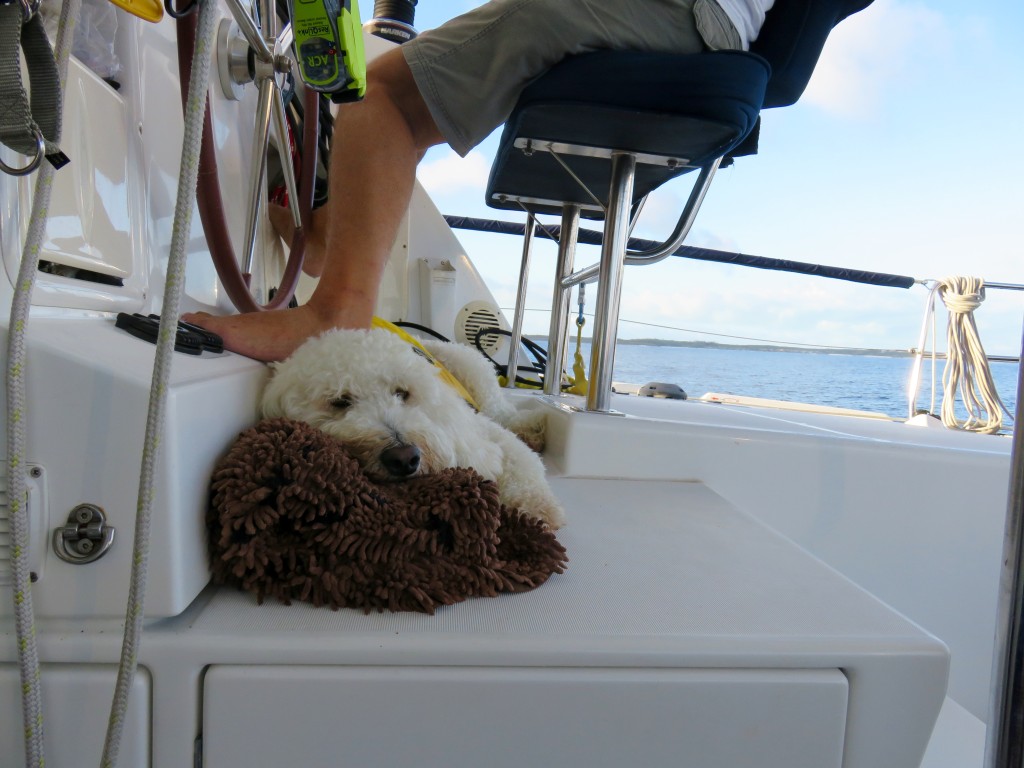 Entering the turquoise water of Elizabeth Harbour. The city of Georgetown is on the right and Stocking Island is on the left. 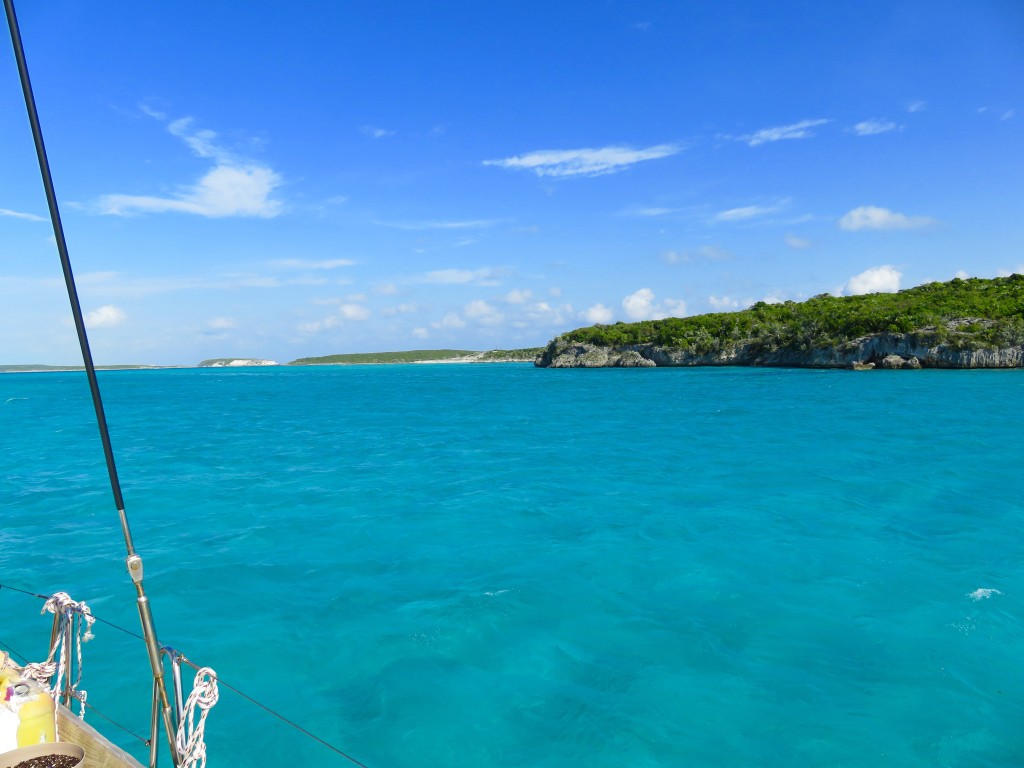 Finally we are on our mooring ball in Hole 2. 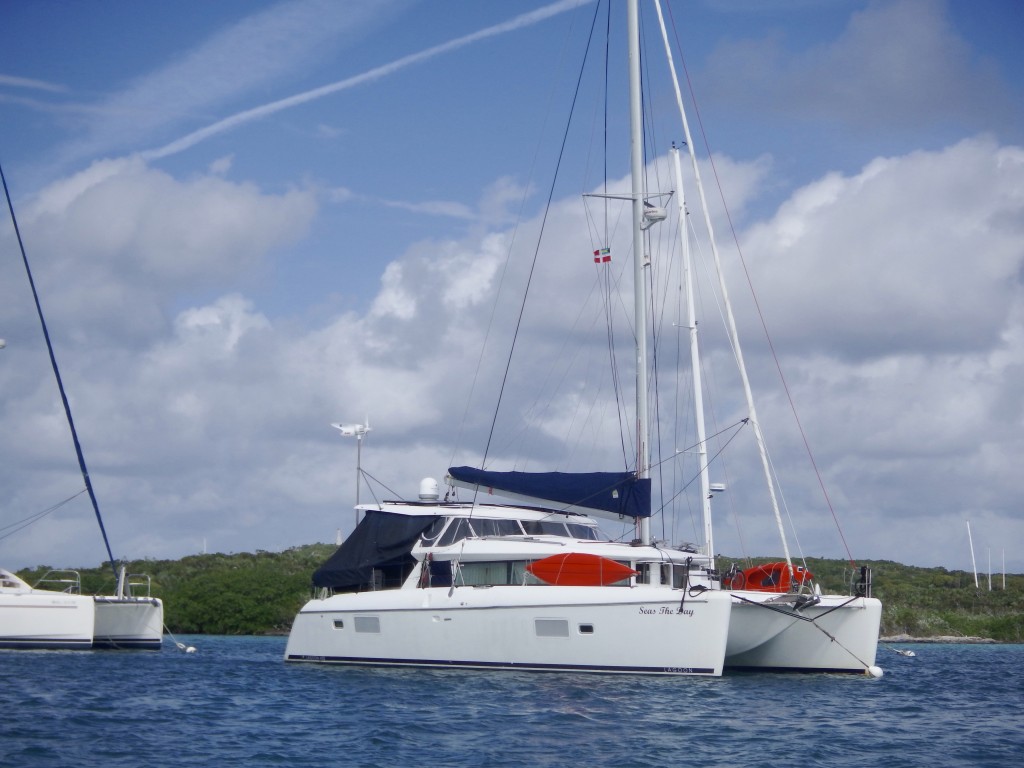 This is Hole 2 with Elizabeth Harbour and Georgetown in the background, We are at the far end of the mooring field, protected on all four sides with a narrow channel running in the foreground of the picture from Hole 1 through to Hole 3. 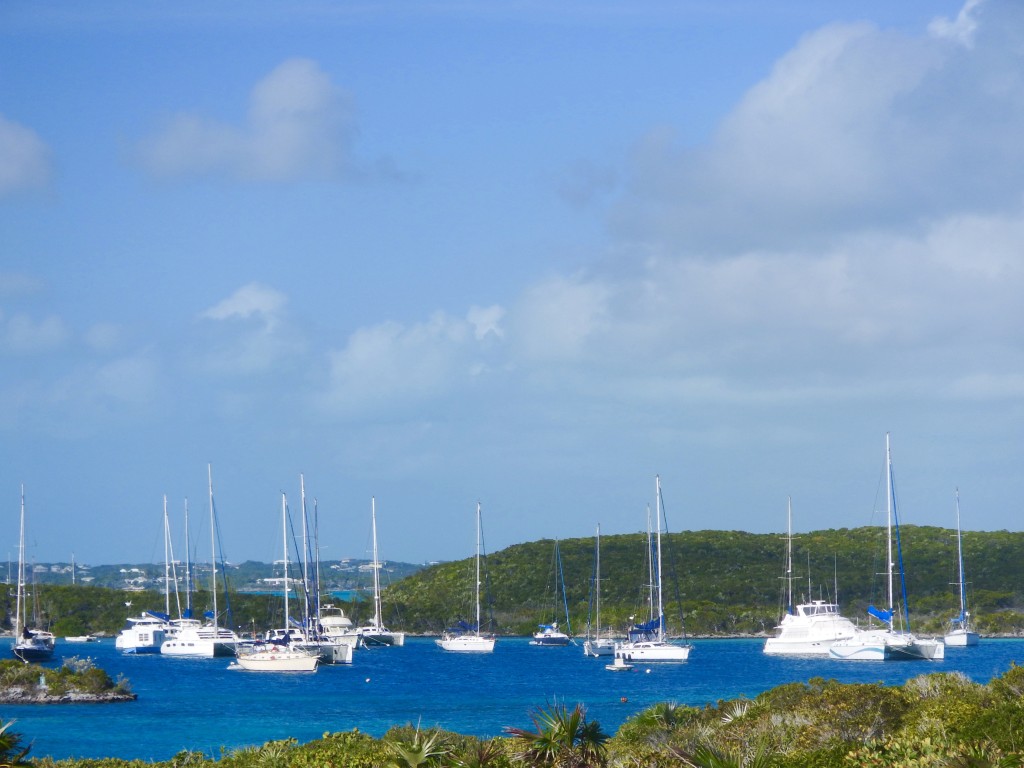