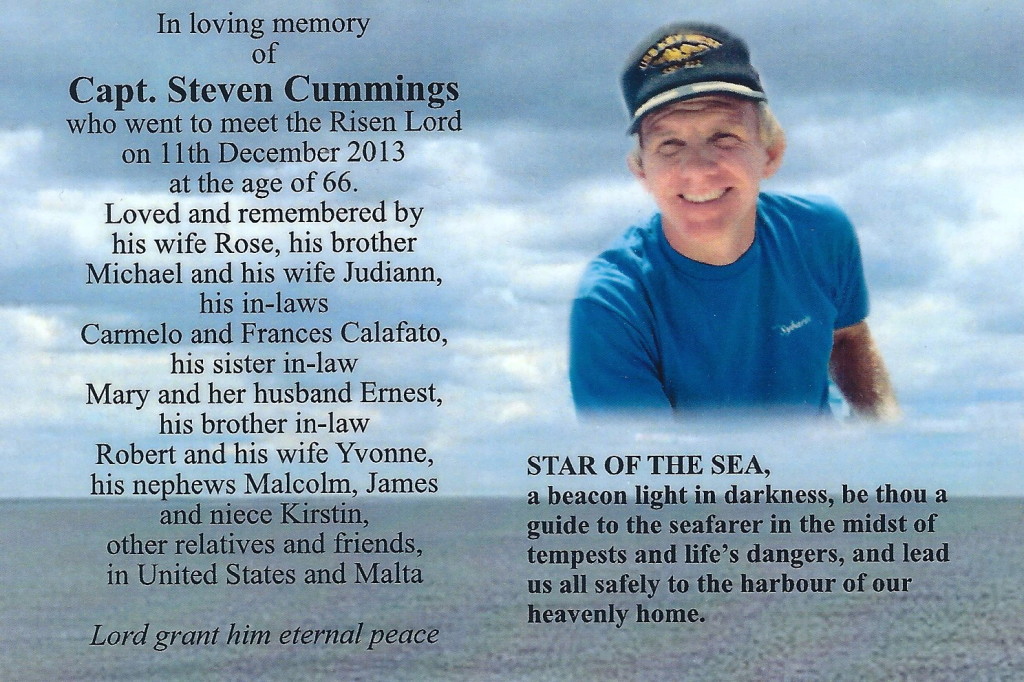 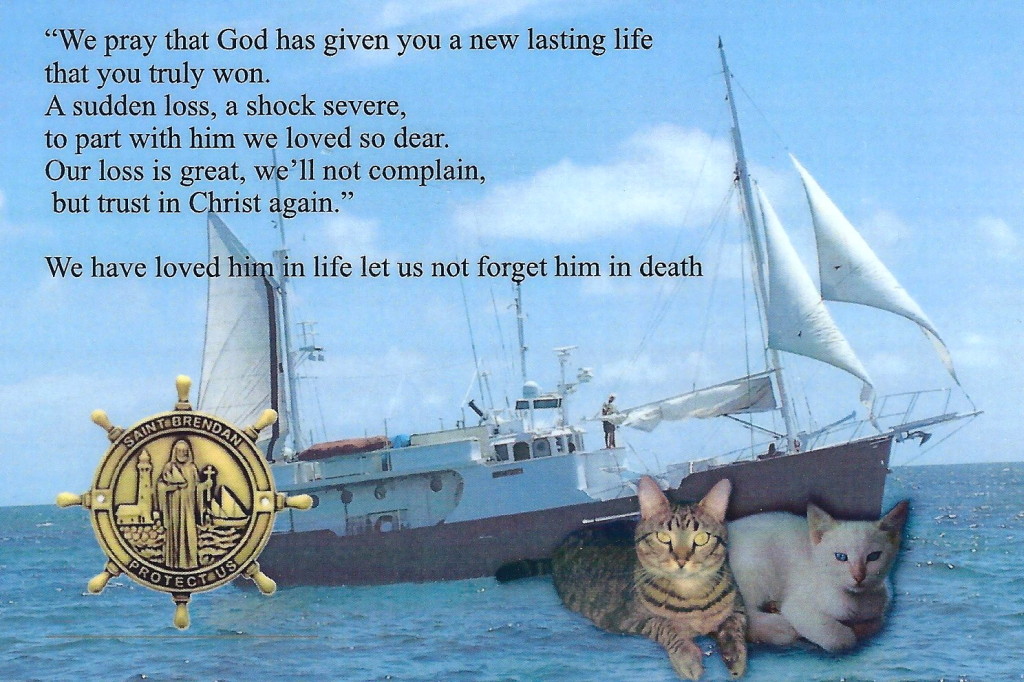 On December 11, 2013, 66 year old Steve Cummings, who had been staying at Sunset Bay Marina for the last several years, drowned off Bermuda when his 65 ft military tugboat sank.  He was on his way to join his wife Rose who had returned to Malta to be with a sick parent.  Steve was a very experienced mariner, having sailed around the world and owned boats his whole life.  He bought Silent Thunder, which was built in the 1950’s, and completely renovated the interior to make it a comfortable home. He was a quarter mile off the Bermuda coast having just left to start his TransAtlantic cruise, when his boat got a leak by a thru-hull, and two of his three bilge pumps stopped working. Steve called for help, abandoned ship and took his two cats in a dinghy.  People arrived where the boat had been within minutes, but the boat had sunk and Steve was nowhere to be found.  A few days later Steve, his cats and the dinghy washed ashore.

On December 21, friends of Steve gathered at Sunset Bay Marina for a very touching memorial service.  His ashes were thrown off the end of Dock A by his wife and relatives.  Poems and prayers were read, including one written for the occasion by Gil, a sailor who also resides here.  A wreath was sent down the river with his ashes, then each person threw a flower into the water.  Friends shared stories about this quiet, helpful man after we ate a potluck dinner.  Below are a few pictures of the service and get-together.  At the end of the evening, we all raised a glass of Dr Pepper, Steve’s favorite drink, in a toast to a friend who died as he lived, on the sea. 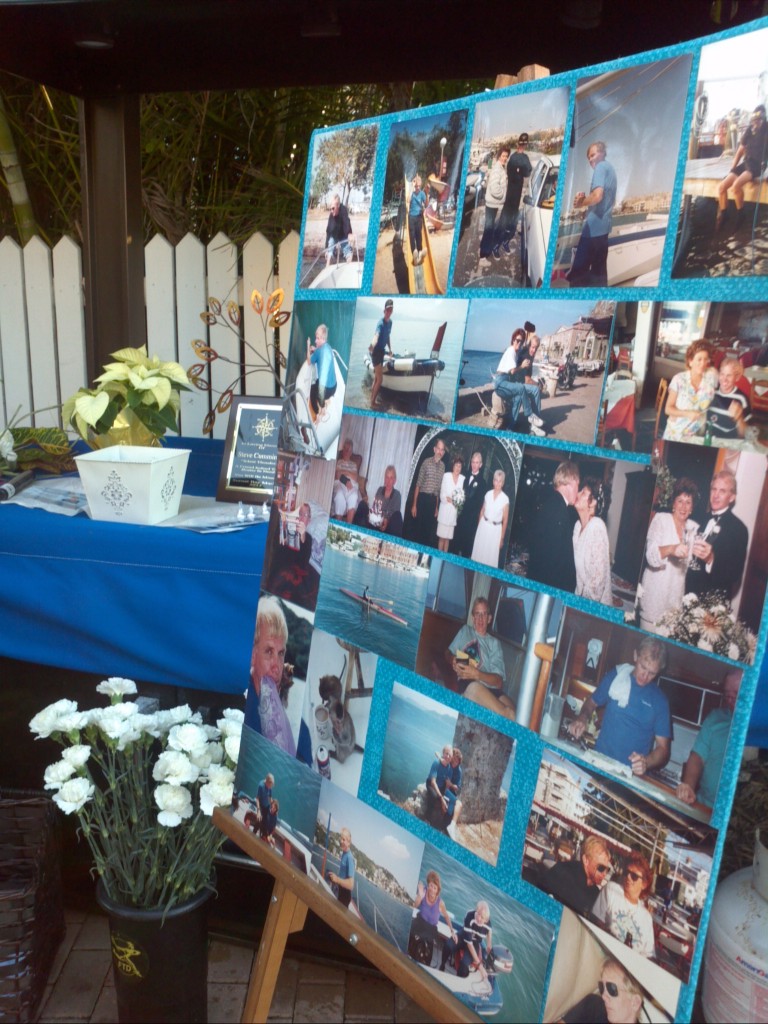 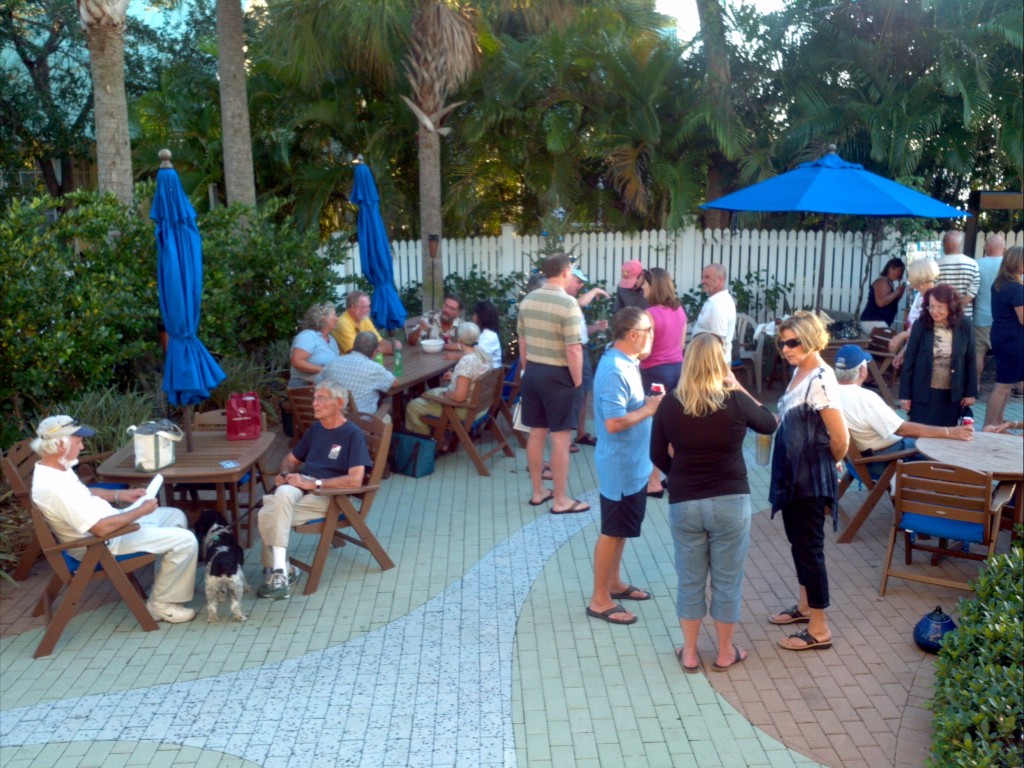 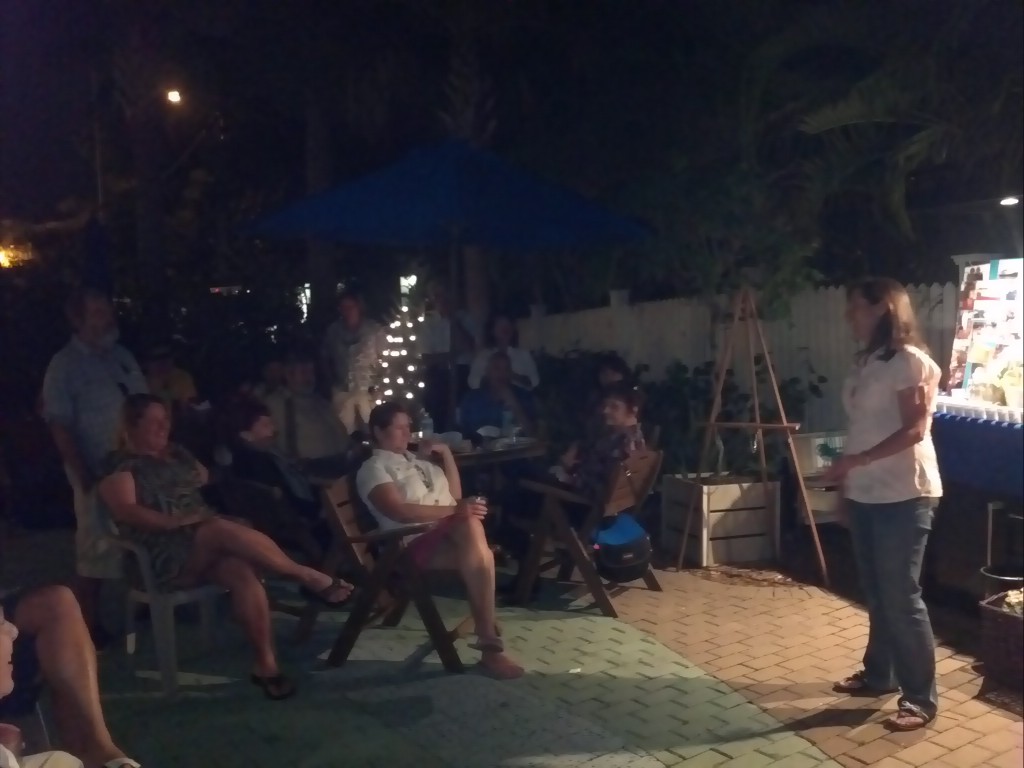 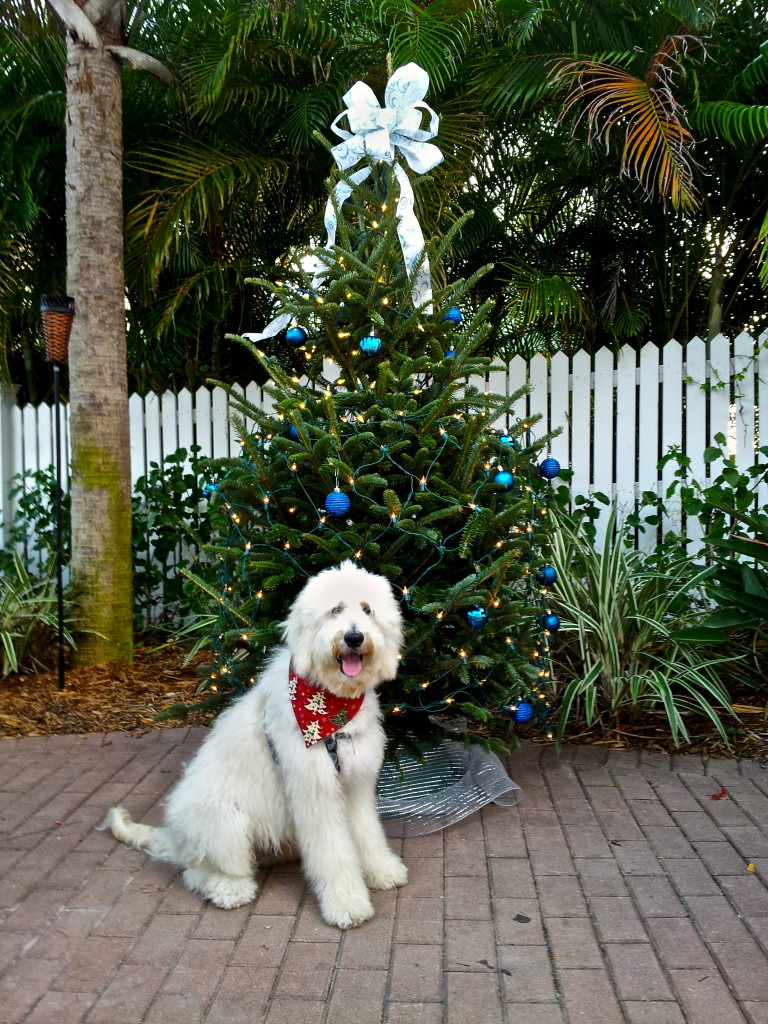 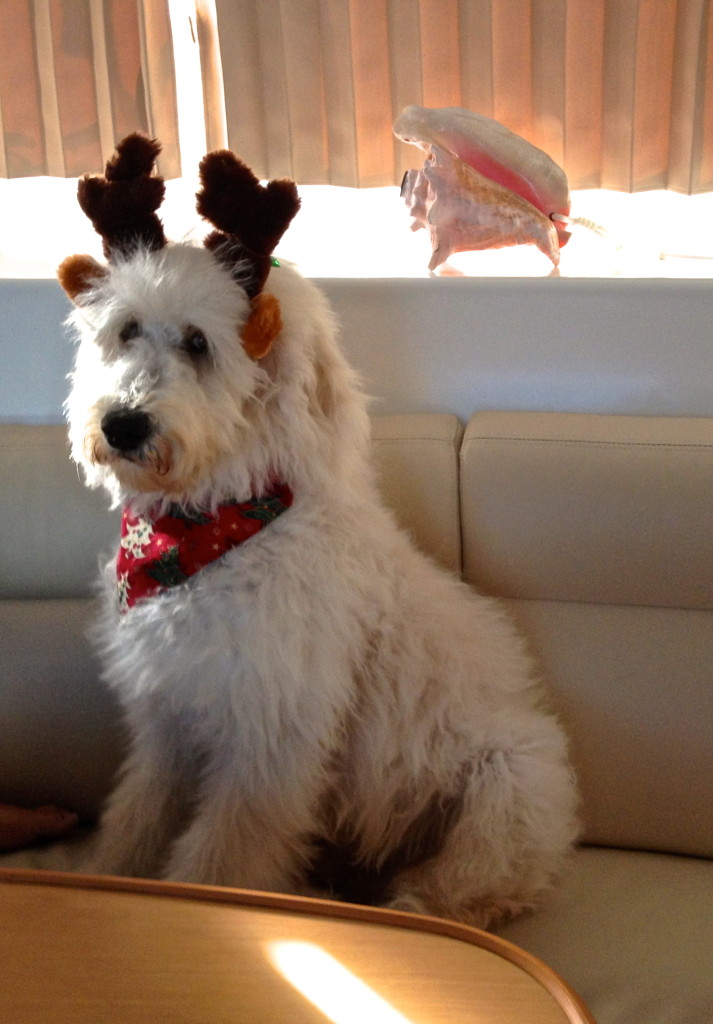 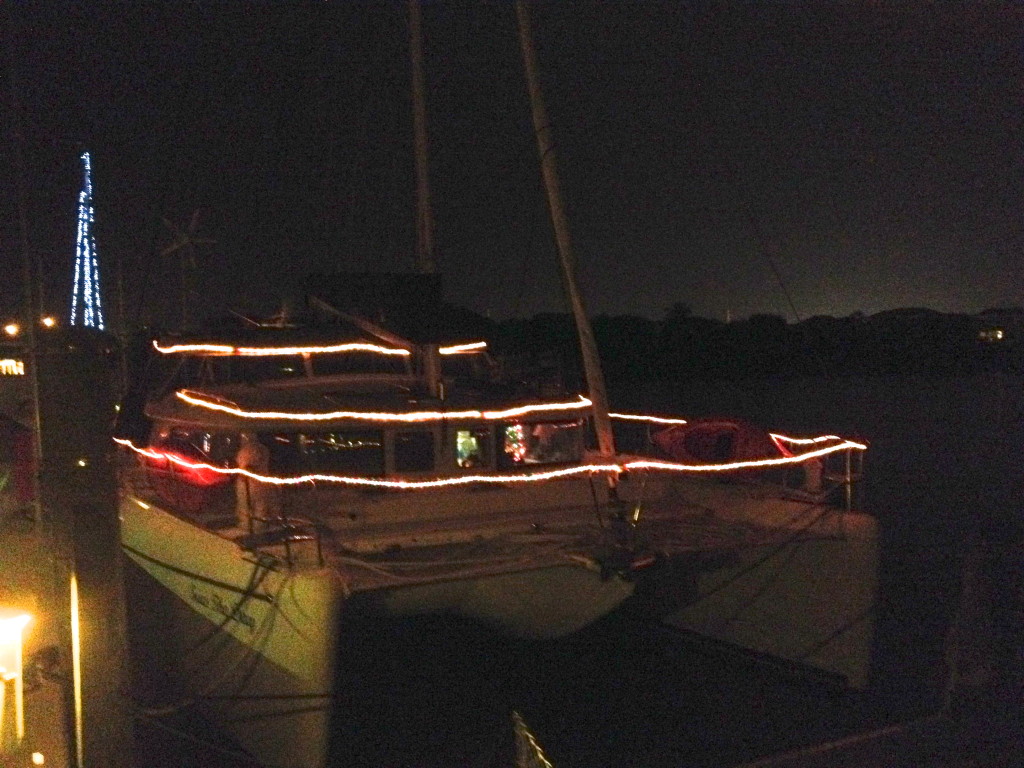 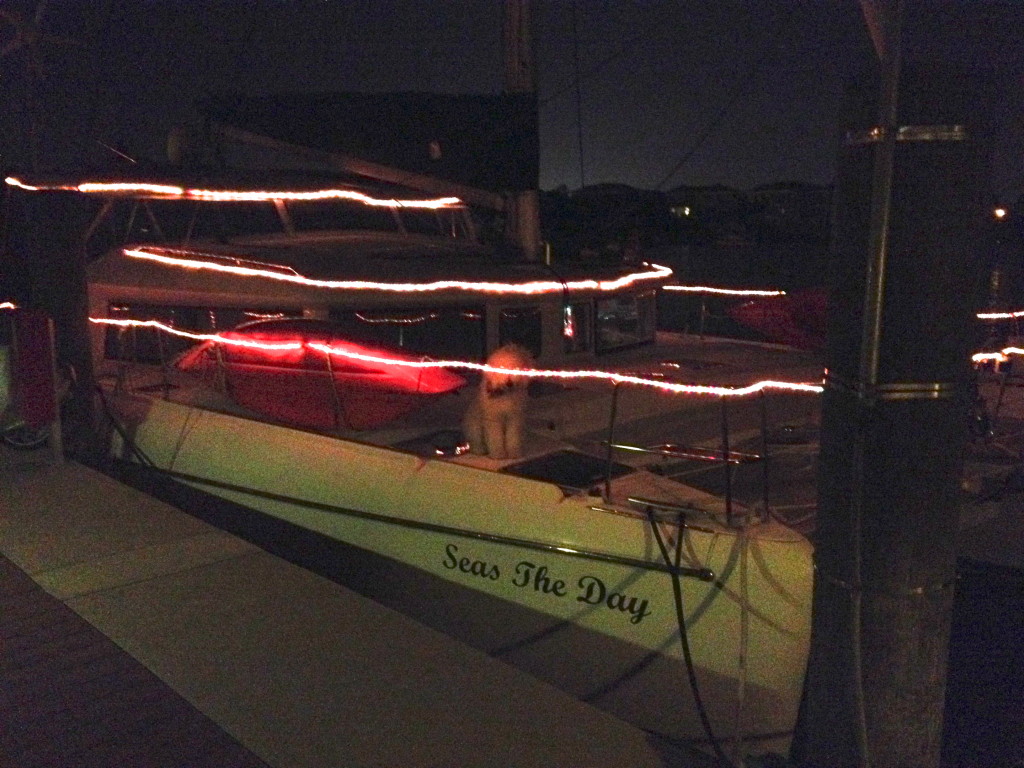 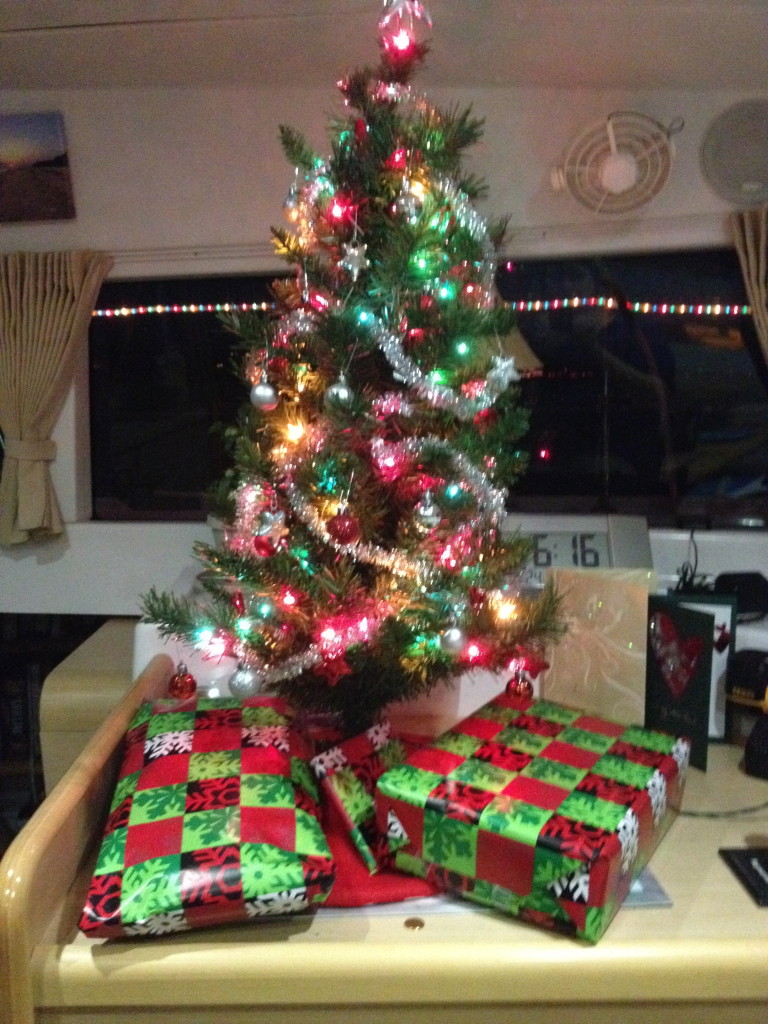 Our “plan” had been to leave for the Bahamas next week when Sailor is six months old and “legal” to enter the Bahamas, but then life happened.  My son Peter is scheduled to have spine surgery on January 17th, so we will keep the boat at Sunset Bay Marina in Stuart until I return from being with him for his surgery and recovery.  The surgery will be in Bethesda, Maryland, and then he and I will fly to his house in Oceano, California where he will recover.  I should be back in Florida sometime in early to middle February, depending on how long Peter needs me.  I am so happy to be able to do this for him and any cruising delay is not a consideration.  We’ll still have plenty of time to go to the Bahamas this season.

In the meantime, we have been busy NOT getting ready to leave.  Mark is probably quite happy to have more time for his projects.  Currently he is working on a dining table for the cockpit.  The small “coffee table” in the cockpit can by switched with the large dining table in the salon, but we never do it.  Mark has built a beautiful drop-leaf table which matches the other tables.  It has been a long drawn-out project. In the photo below, Mark has the three pieces on the dock while he is coating them with epoxy. Notice Sailor is overseeing the work. His next big project is to install a solar panel above the dinghy davits for the hot water heater.  This will enable us to always have hot water (as long as there is sun during the day).  In the past, if we wanted hot water while anchored or moored we had to turn on the generator. 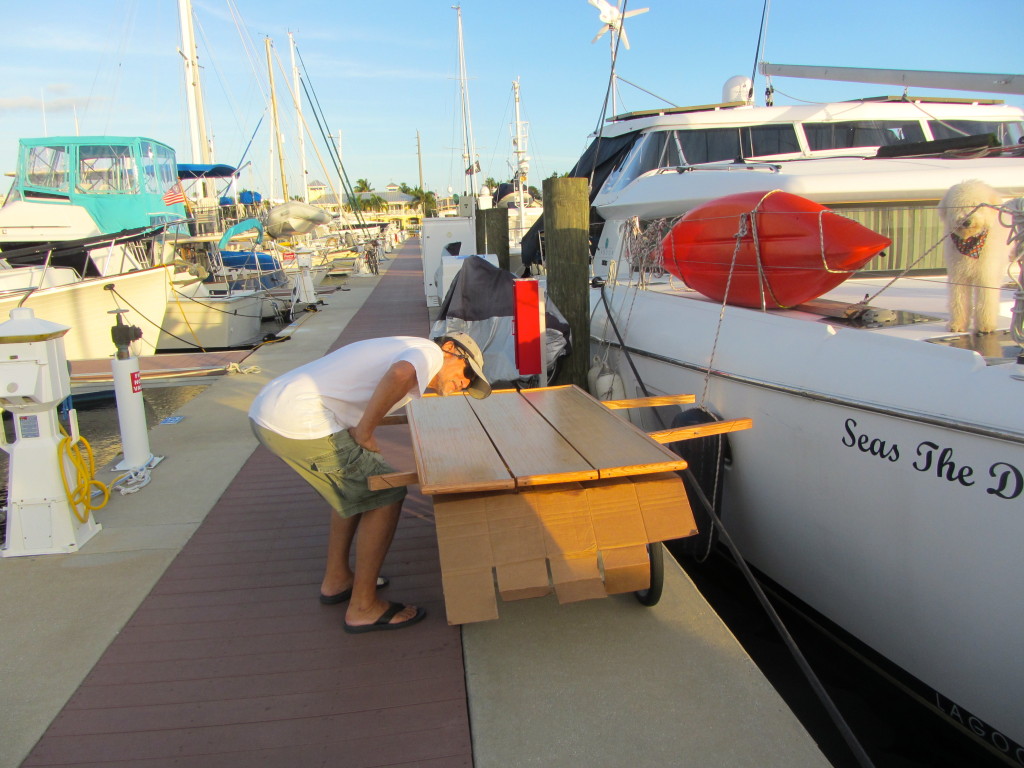 Last week we went down the St. Lucie River to get the mast stepped. (We had it unstepped last June so we could get under a low bridge on the canal and be hauled out in case of a hurricane warning. Thankfully, there were no hurricanes in Florida this season.)  A large crane lifted the mast they had stored for us off their truck and in the photo below the men  are putting it back on Seas the Day. 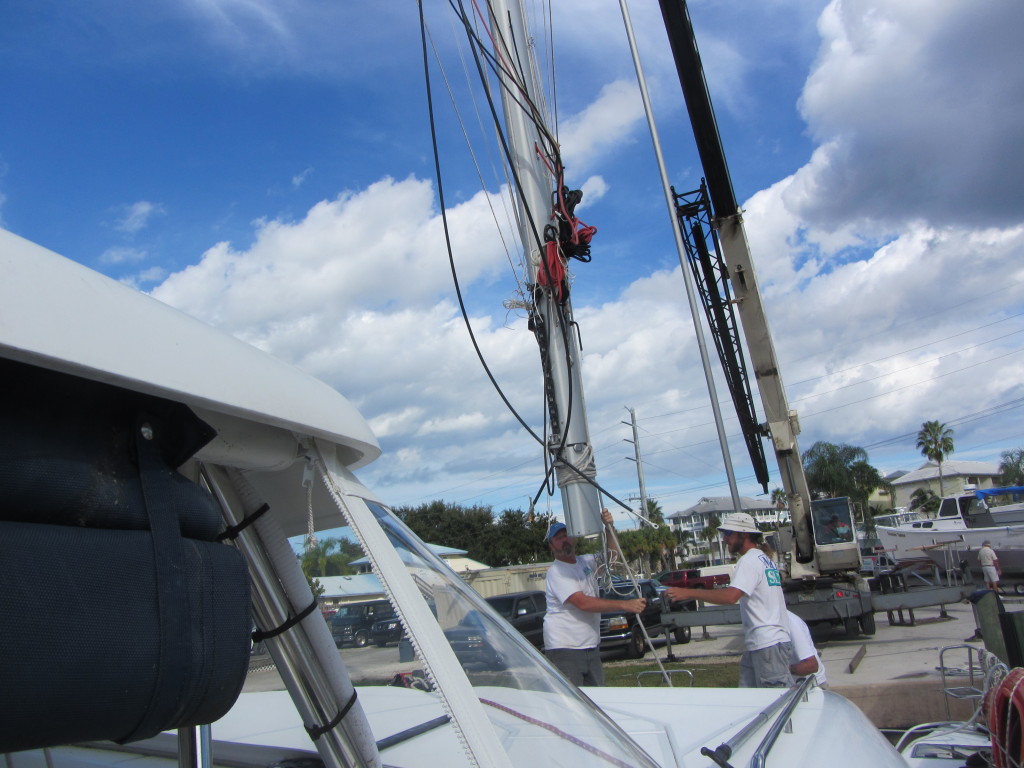 The workers didn’t have time to put the sails on so we went back to our slip at Sunset Bay still a motor vessel.  They also didn’t reconnect the electrical wires that run down the mast but should be finished this week and then we will once again be a sailboat.

A week ago we drove to Vero Beach to visit good friends and boat buddies Cathie and Tom on Interlude.  Apparently we were so busy talking we forgot to take any pictures.  We were hoping to cross to the Bahamas with them, but they will beat us there. We’ll be sure to catch up with them in the Exumas and hopefully sail together again.

Of course, Sailor continues to grow in size and as a fantastic boat dog.  He is six months old in a few days on December 13 and weighs 38 pounds. Last Sunday we drove to Boca Raton for our second “Doodle Romp.”  There were 17 Goldendoodles there from Moss Creek Goldendoodles.  We had a great time at the Canine Cove Dog Park.  The doodles all kept together and stayed close to their people. Occasionally an SOB (Some Other Breed) dog came near our group, but they didn’t stay long. 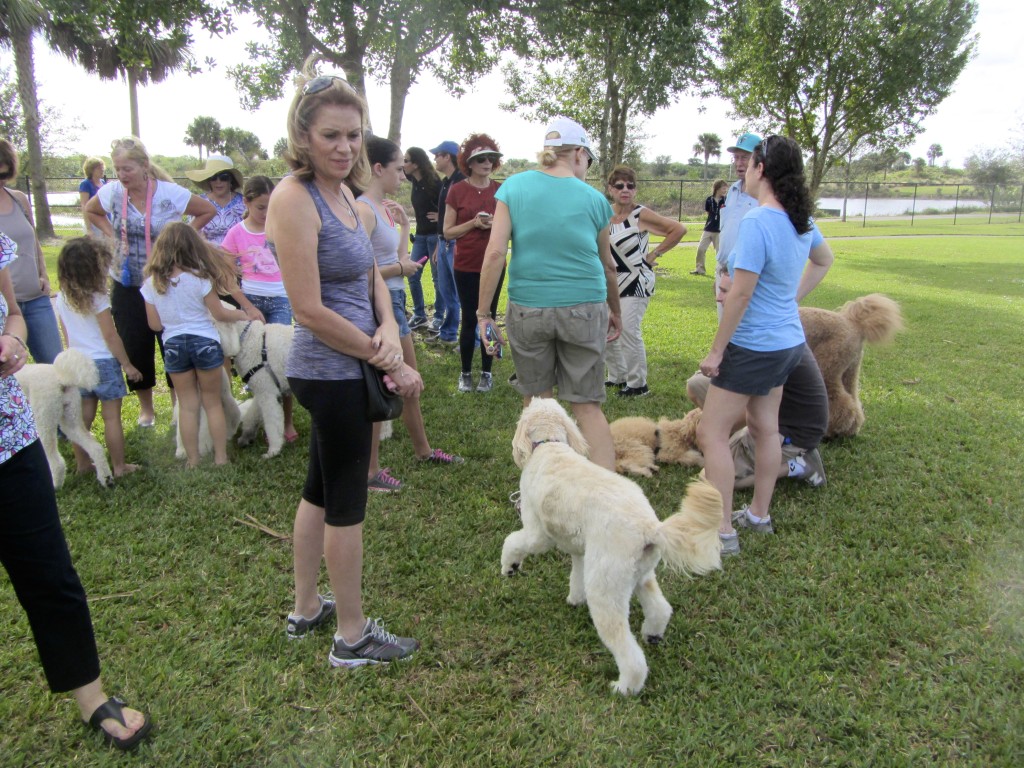 After several hours we drove a few miles to Ruby Tuesday in an upscale Town Centre for lunch.  The dogs behaved perfectly and the restaurant was very accommodating, bringing each dog their own bowl of water. 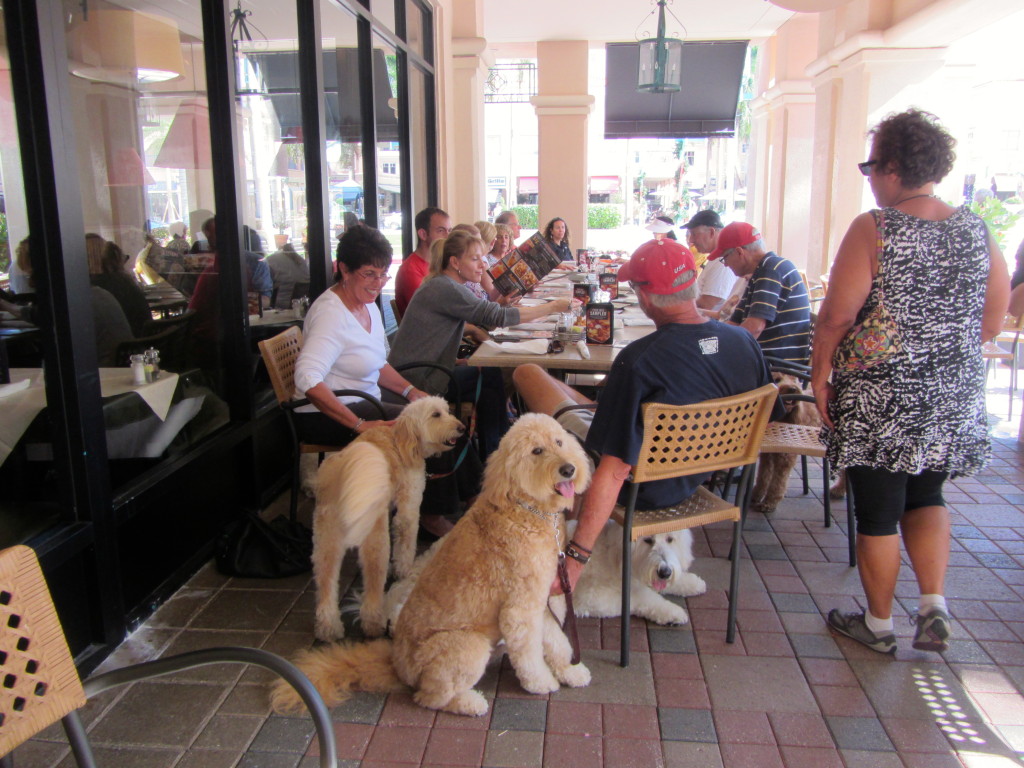 After lunch, we went across the street for a group picture. Some of the families had left by then, but as always the doodles were well behaved even with shoppers and vehicles going past them. Sailor, Mark, and I are at the end on the right side. Almost every color of Goldendoodle was represented at our romp.  One of the most unusual is Orli, the parti colored doodle in the middle.

While Mark has been working on projects, I have been doing very little to get ready for our cruise.  However, before I leave for Maryland on January 15 I will have us totally provisioned with the boat organized for four months in the Bahamas.  First on my “to do list” for the next month is to make a “to do list.”